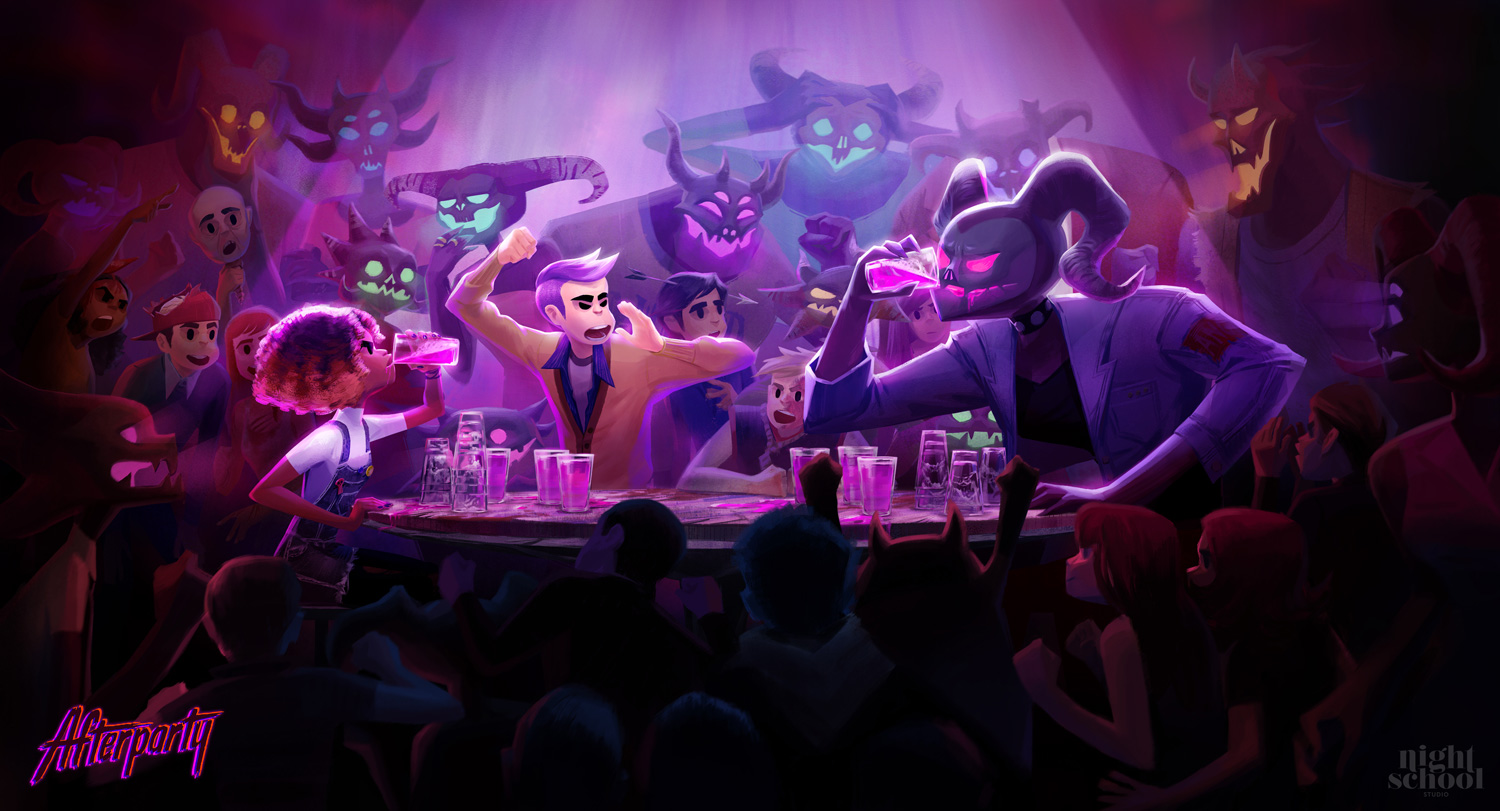 Being raised in a Christian family meant a lot of things. It meant going to church on Sundays, it meant repressing my bisexuality until well into my 20s, and it also meant doing everything in my power to avoid winding up in a place called Hell. If I’d thought that the real fictional Hell would be anything like Afterparty‘s depiction of Hell though, I might’ve had a bit more gay sex and coveted a few more neighbour’s wives. It’s not that Night School Studio’s take on Hell isn’t also the ‘eternity of damnation and torture’ kind, but it does come with a surprisingly loose get-out-free clause with only one requirement: out-party Satan himself.

Of course nothing in life (or death) is as simple as that; something that protagonists Milo and Lola quickly learn on their first day in perdition. Unsurprising for a place designed solely for the eternal torture of human souls, things aren’t going so great down in Hell. Satan is using his partying as a crutch and his demon siblings, each with their own personal problems, have all but disbanded. This makes what should have been a relatively simple endeavour for Milo and Lola into something far trickier, and sets the scene for the primary challenge in Afterparty – navigate a Hellscape of complex character and family relationships in an attempt to gain favour with the Dark Lord himself.

Afteparty is unabashedly a game about talking. Aside from some very quick, throwaway mini-games in certain spots, your primary means of interaction and challenge in the game comes from navigating conversations with Hell’s denizens. Much like Night School Studio’s previous joint, Oxenfree, dialogue sequences play out in real time and require quick thinking from the player about which of the multiple available responses they’ll pick. The twist here is that (in keeping with the game’s themes) Milo and Lola can consume any number of unique alcoholic beverages before and during conversation that unlock new dialogue options based on the drink’s properties. There are the basic drinks that offer simple ‘liquid courage’, but also some wilder concoctions that might cause the pair to, say, become incredibly flirty or even talk like a pirate. Interestingly, these options aren’t always the best or most useful in conversation – sometimes the default responses will get you exactly where you need to go – but they’re usually the most entertaining.

All of this works as well as it does because of one important fact; the writing and humour in Afterparty are fucking fantastic. Night School Studio have done an amazing job at putting together a cast of characters that is well-rounded and interesting, and used their stories and their interactions to make some incredibly insightful observations about humans and the human condition. Quite a feat when the majority of the cast are demons. One of the standout characters is Sister Mary Wormhorn – Milo and Lola’s personal demon – who constantly shows up to antagonise them, and often comes around to cap off a gameplay segment with a slide presentation on how the two (and by proxy the player) made all the wrong choices and fucked everything up. It becomes incredibly meta at times, and I almost always had either a smile, a look of shock or a cheeky tear on my face.

When Afterparty isn’t being poignant and contemplative, it’s usually being incredibly witty (often at the same time). The game’s vision of Hell is firmly rooted in religious satire and does a great job of repurposing recognisable biblical figures and concepts and merging them with more modern ideas. Demons use Bickr, Hell’s chosen social network, and it’s fun to browse and see what the locals are saying. The game’s humour slides effortlessly between Simpsons-level satirical and subversive humour and a wickedly dark streak that results in some brilliant moments. At the risk of spoiling one of them; there’s a great joke involving the deceased Amy Winehouse and a bait-and-switch quip about her ‘chocolate overdose’ that actually had me shooketh, as the kids say.

While the writing is peerless, Afterparty’s overall presentation is a little more hit-or-miss. There’s a great Jamie Hewlett/Gorillaz-esque vibe that runs through both the character designs and the bangin’ soundtrack that I absolutely love, and the use of lighting and the neon-soaked colour palette is often top notch. Unfortunately the environments often come off quite flat and low-detail in comparison to the effort put in elsewhere, and it really feels like bigger, livelier character models would have sold the quality dialogue that little bit more. The voice acting is definitely top-notch though, with talent like Ashly Burch and Jackie Tohn putting in some great work. I only wish that enabling subtitles in the options menu would fill the on-screen speech bubbles (usually blank and used purely to denote who’s speaking) with text, instead of just reading at the bottom of the screen. Seems like a missed opportunity.

Afterparty’s biggest sin is a noticeable jankiness that permeates the entire game. Constant stuttering occurs throughout (especially during the pseudo-loading screen boat rides), I frequently encountered bugs or broken animations, and characters frequently walk through each other – though that weirdly seems to be by design. None of it stopped the game from being fun or forced me to replay anything, but the numerous small issues add up to a general lack of polish that feels out of place in what is a fairly simple game, technically.

Afterparty is a wild ride through Hell that stands on the strength of its superbly-written characters and world. The simple, dialogue-based gameplay definitely won’t be for everyone and the technical issues are an unfortunate disappointment, but if you can deal with that then this is definitely a trip worth taking. Whether you inevitably make it out or not. 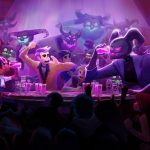 Afterparty Review
Good As Hell
A daring and fresh adventure in Hell that excels in the most important areas but just barely misses the mark in others.
The Good
Seriously great writing and humour
Character designs are cool
Soundtrack is a total bop
Drink-based dialogue system is neat
The Bad
Technical issues drag the experience down
Environments aren't as well-realised
8
Get Around It

Afterparty Review
Good As Hell
A daring and fresh adventure in Hell that excels in the most important areas but just barely misses the mark in others.
The Good
Seriously great writing and humour
Character designs are cool
Soundtrack is a total bop
Drink-based dialogue system is neat
The Bad
Technical issues drag the experience down
Environments aren't as well-realised
8
Get Around It
In this article:Adventure, afterparty, game pass, kieron verbrugge, narrative, night school studio, Oxenfree, pc, ps4, Puzzle, review, switch, wellplayed, Xbox One