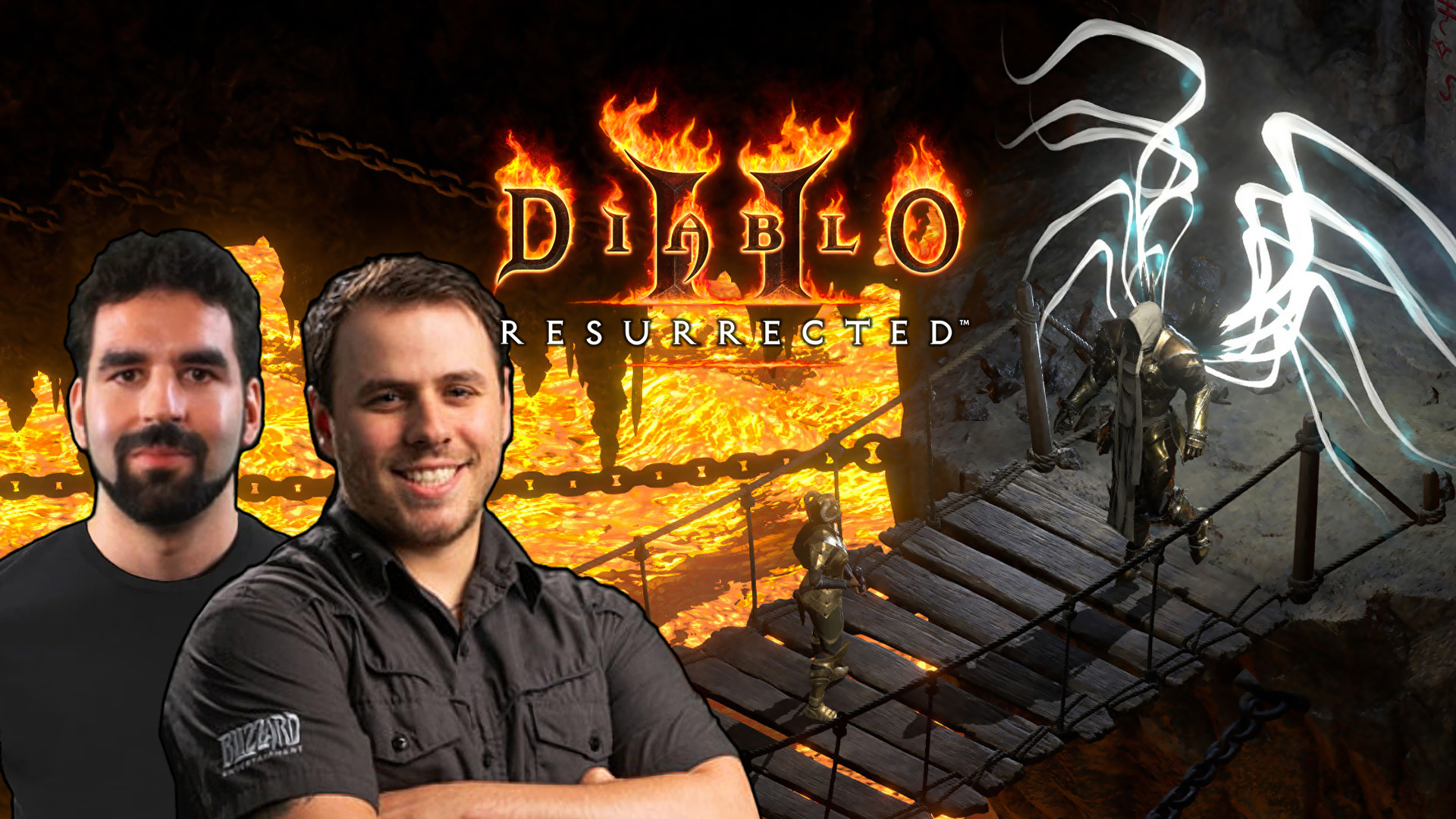 Across all of gamerdom, Diablo II is considered a genre-defining masterpiece of its time. Very few titles could hold a candle to what it achieved, and while modern standards may weigh heavily on its crown – you can’t dispute that it has earned its corner of gaming history. Woe to the poor souls who need to remaster it, right?

Luckily for me, I got the chance to have a very open chat with some of the talented folks sending us back to Hell, including Andre Abrahamian, Lead Designer on the project, and the always smiling Matthew Cederquist, a huge Diablo fan and producer at Blizzard Entertainment.

WellPlayed: There have always been these rumours in far off corners of the Internet that it would be technically impossible to remaster Diablo II – people who originally worked on the game claimed that so much of the core data that drove the game went missing, is there any truth to this?

Andre Abrahamian: Well we’re happy to say we do have the source code – that’s how we’ve been able to patch the game a few times in the past and how we’re doing Diablo 2: Resurrected now!

WP: Well, you couldn’t remaster it if it was gone…

AA: Exactly! As for other things that might have been lost – naturally with the remaster, when I first started on the project I asked around for …what did we have? And I was provided with ‘some’ stuff – which wasn’t much. I was quick to disbelieve that because, as a designer, I wanted to know as much as possible about this game, so I dug around archives and discovered a lot of source materials and lost documentation – even toolsets that were used to build the original game.

When we were approaching the art style we had a lot of concept arts and source files on certain models and things, so I spent lots of time organising a lot of these things that were for anything we could find. We’ve literally been provided physical papers of drawings from the Blizzard North, and we sat down on the floor looking at early concepts of like, Baal, and then various monsters, even though some of it was an early reference that wasn’t even used in the final version.

It was still amazing to see all these things, stories behind the game development and it definitely helped us to make good decisions going forward.

WP: I just love the idea of ‘The Blizzard Archives’.

Matthew Cederquist: Yeah! One of the cool stories I like to tell is when Andre and I first went down this path of making Diablo 2: Resurrected, I went along with someone at the company to some external warehouses that we have – where we just store old stuff, you know? And it’s like you’re the archaeologist of the history of these 20-year old games!

I found these crates – just crates and crates of documents and notebooks that had doodles in them, to actual concept art. You really got a sense of what they wanted to make out of this game – and then what actually went into making the game.

So it was cool to bring those back to the office, sit on the ground with your legs crossed and just geek out about everything that was found.

WP: So just tons of physical artifacts from the history of Diablo?

AA: Oh, it was super cool! One day someone came to the office and plopped a stack of CDs labelled ‘Diablo 2’ on my desk and I got so excited! I grabbed a CD reader and just started going through it as much as I could!

MC: …Because who has CD readers now, you know?

MC: Originally we wanted to make sure that the 2000 version and the 2001 version of Diablo II and Diablo II: Lord of Destruction were still intact. So if you didn’t want to join us in Diablo II: Resurrected, no worries whatsoever.

AA: A lot of remasters have different stories. Because for Diablo, it’s been 20 years of great community and we looked at it and saw this as a genre-defining game, a big part of Blizzard, so that’s why when we were looking at it we quickly saw this game already is amazing. So one of our game pillars was immediately ‘maintain the fun’, and with that also identifying that this is a game that is part of a legacy spanning 20 years. 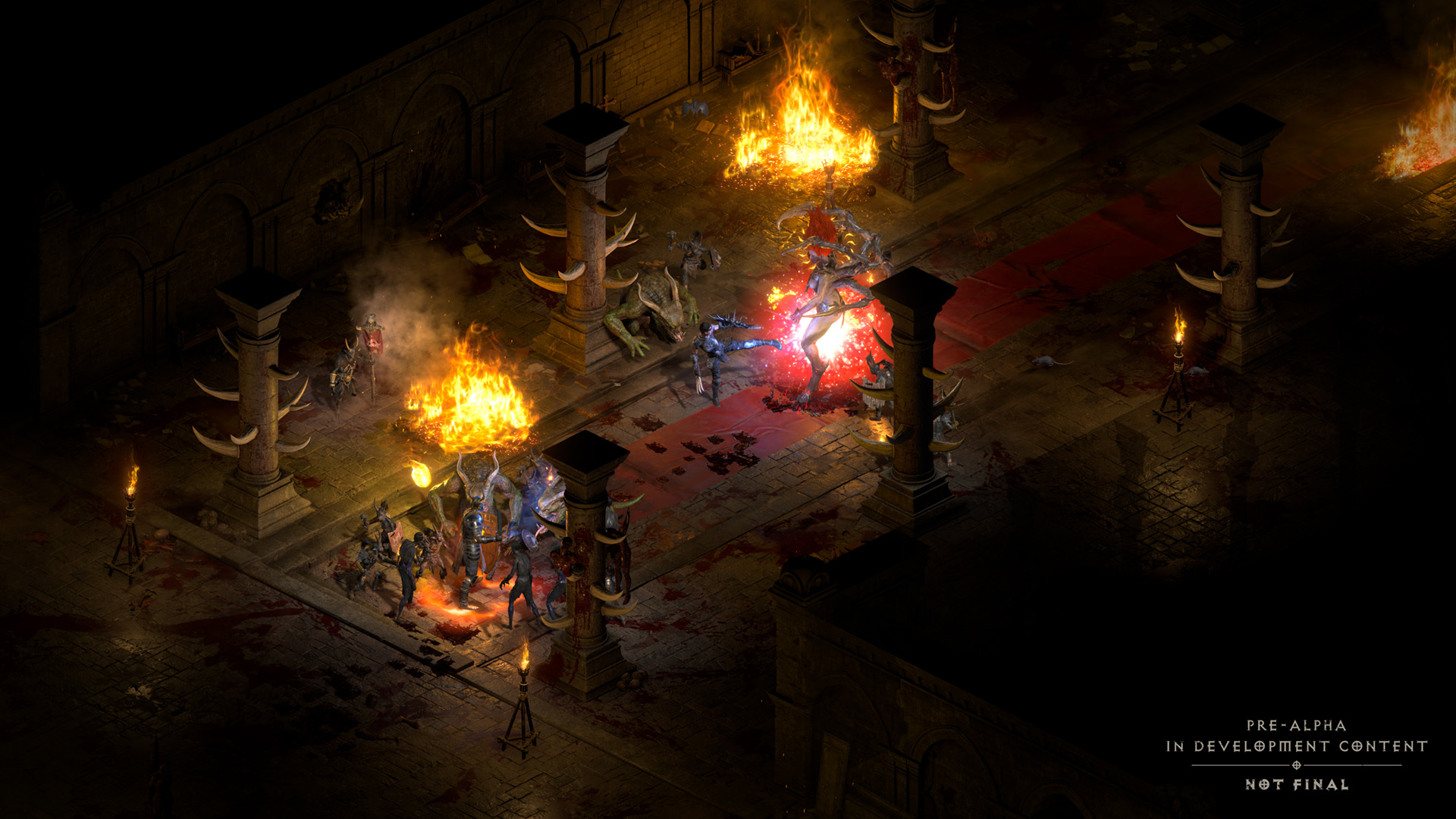 WP: Following on from the visual side, there’s also the task of sound design and working with ‘what you have’. Obviously there’s a very different expectation for sound nowadays compared to when Diablo II came out 20 years ago. Have you encountered any hurdles?

MC: I don’t think there are many hurdles with this one to be honest with you. We took liberties in a 70/30 rule, where 70% of it is still your iconic sounds, right? Like if the Barbarian howls, or a potion drops on the ground, or a skull plops on to your inventory screen…

WP: …Those are probably the top three MOST iconic sounds I remember, particularly the skull!

MC: Right?? It’s because I am going through it in my head, and it’s like – THOSE are THE sounds. Those aren’t changing! Those are going to be the same. There is no way we are going to change them. Will we remaster those to be even more epic? Yes.

But, we also took that 30% liberty in some areas of the game. Let’s just say for example, with ambience – you are in the Flayer Jungle – you now have frog ambience, you have the wind blowing past you, and the sand going past you in Act II. All those little things that make you a little creeped out in 7.1 surround sound…?

MC: There’s some really really cool audio stuff for audiophiles out there with this game.

AA: Often what I like to add to that, with your character, we are adding a lot more clanking in the armour and stuff when you are moving depending on your armour sets. Also, different footstep sounds depending on what you are stepping on! Lots of those sort of ‘immersive’ elements that add to the experience.

AA: One of my favourite things is that you are always a button press away from seeing what the game used to be, because this 3D engine we have built is running ON TOP of the game, simulating what is in the game running underneath. That is why we have this feature, because it is actually the same game underneath it all. It is still following all the same rules – collisions, path finding – that the old game did. This helped us stay true to it being a ‘faithful’ remaster in terms of what we were trying to achieve, while also still giving us liberties to achieve recreated art, additional embellishments – that 30% extra!

WP: Just for the sake of asking, at this point in Blizzard’s library we have seen a couple of games remastered, like Starcraft: RE-mastered, Warcraft 3 RE-forged, Diablo II RE-surrected, is there a whiteboard at Blizz headquarters with a bunch of RE-something words for when you possibly look at remastered something else??

MC: Hahaha! Not to MY knowledge Ash to be honest with you. When I first put it out there that we should call it ‘Resurrected’ it just sort of resonated…

MC: Heyo! You know, it’s this 20-year-old game that we are bringing back from the…well, not from the ‘dead’. But you know it just resonated with me, and then it caught steam and people liked it. But I did kinda stick to the ‘RE-something’ aspect to it – but I don’t think there is a whiteboard anywhere.

WP: Thank you so much for all these amazing answers guys – I can’t wait to see it all in motion.

AA: It has been a pleasure!

MC: Thanks a bunch! It’s always good when you have a fun interview – thanks for making it fun!

Further details, including updates regarding pricing and availability, can also be found by visiting the official site www.diablo2.com.