We all know the story of Among Us – that indie darling from a few years back about space jellybeans fixing wires and murdering each other, and how it found it’s audience in a heartwarming tale of redemption (and sudden Twitch popularity).

However a lot of people questioned how the Among Us developers (a tidy little studio known as Inner Sloth) would treat their late-coming success. A sequel perhaps? A cash-in netflix series?

Well it turns out the sequel guess was mostly right. Only now, it isn’t anymore.

The Steam page for the game has received some great communication from the devs, and their most recent post has actually clarified that they no longer plan to work on/release Among Us 2 in light of how well the game is doing: 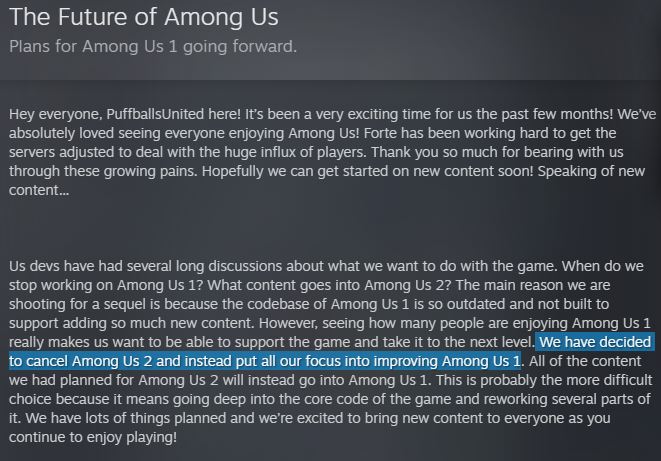 Relatively shocking news – at least from the perspective of someone entirely used to the ‘modern’ thought process of gaming. Resisting the temptation to release a new platform and re-capitalise on your newfound success is incredible, and very admirable to see the dedication of Inner Sloth to their product. ‘Tech debt’ is a very real issue for many developers, and the willingness to work hard and improve your codebase is worth applauding.

So brilliantly we will continue Among’ing Us for the foreseeable future, with some exciting thoughts at what the existing title may become down the line.

Personally I would like a new map to murder people on – I require additional dark corners to lurk in. Inner Sloth, pls.