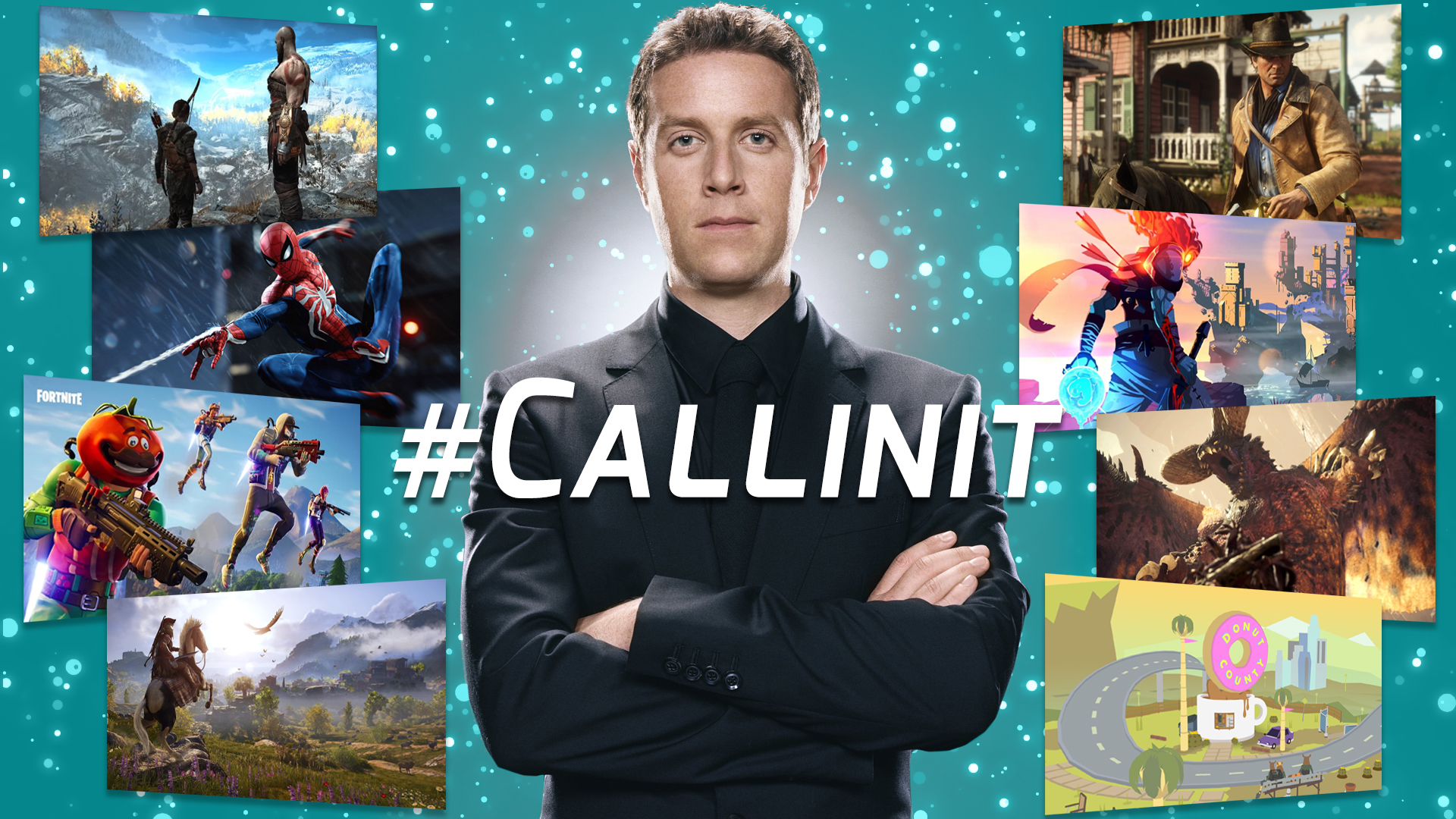 The Game Awards are coming, which means Geoff Keighley will emerge from his cave alongside Hideo Kojima, Reggie Fils-Aimé and all his other buddies as they reveal some new games and hand out awards that turn the internet into the social media equivalent of Fornite Battle Royale. So, to help mentally prepare everyone, I have decided to emerge from my own little cave and give you the GOTY cheat sheet before they are unveiled later this week.  Pick up the phone Geoff because I’m #callinit.

Every year I am torn between two or three games for my personal GOTY. This year, those two games are Red Dead Redemption 2 and God of War. While I personally want God of War to win, I think the scope, the record-breaking sales, critical success, impact and sheer ambition of Red Dead Redemption 2 will make it the more popular contender and will ultimately help it edge out as the victor. This has happened in The Game Award’s predecessor the Spike Video Game Awards multiple times when Rockstar has been involved. In 2010, Red Dead Redemption beat out Mass Effect 2, while Grand Theft Auto V won the award over The Last of Us. I feel the same will happen here with Red Dead Redemption 2 and God of War. Both deserve it and both are some of my favourite games of all time but I feel like history will repeat itself given Rockstar’s track record.

Rockstar is back in town!

I’m going to draw a wild card on this prediction and pick Dead Cells. I feel that it fits the definition of the word ‘action’ better than any of the other contenders with its challenging difficulty, visceral mechanics and aggressive gameplay.

God of War feels like a nice fit here. Red Dead Redemption 2 certainly has the bigger global appeal to win ‘Game of the Year’, but I feel God of War really stood out as its own thing in terms of the genre it fits into. Most hack and slash adventure games usually wind up feeling similar to each other but God of War carved its own path in creating one of the most epic games in the genre I have played to date. The combat and mechanics feel perfect and the set pieces and boss fights are blockbuster-level affairs in a world filled with mystery and a real sense of wonder.

Time for Monster Hunter: World to shine. While the early bird of 2018 has many nominations, I think it will be beat out in pretty much everything else outside of this category. Capcom’s coming out party for the franchise is the best edition in the series yet, with a large leap in scope and visuals, and solid post-launch content for players to sink hours into. The gameplay loop of hunting and killing monsters with friends while harvesting their parts to create new armour is scarily addictive and provides some deep but satisfying RPG systems. Lock it in.

There can only be one winner…

Like many other categories, the winner will come down to either God of War or Red Dead Redemption 2. In this case, I’m going to call that God of War will win ‘Best Game Direction’. The main reason is evident through Santa Monica Studio’s implementation of the single camera shot throughout the entire adventure, with constant action and movement occurring. It really puts you in that cinema chair. Furthermore, from a general design standpoint, God of War trims a lot of fat that plagues most AAA games and focuses on polishing the aspects we love. Cory Balrog and his team did an outstanding job with the game’s execution and should be rewarded for it.

Red Dead Redemption 2 will win this one. While God of War can certainly win the award as well for its surprisingly good story and characters, Red Dead Redemption 2 is something else entirely. In fact, it’s leagues better than the first Red Dead Redemption in terms of writing and storytelling. It’s a long, sad and evolving story juggling many different complex characters, themes and tones and filled to the brim with shocking twists, emotional moments and epic set pieces. It is the ultimate cowboy story and I think it’ll take home the ‘Geoffry’.

Winner: Return of the Obra Dinn

I think the dark horse in this category is the Return of Obra Dinn. While it is easy to give the award to the likes of Red Dead and God of War for their insane graphical fidelity, Return of the Obra Dinn goes for the abstract and creates something that will instantly stick in your mind forever. If you see any screen from the game at any time (even without playing it) you can instantly tell it is Obra Dinn. That permanent tattoo in your mind is the reason I think the indie cult classic will win ‘Best Art Direction’.

While the nominees for ‘Best Score/Music’ this year are nothing compared to the likes of Persona 5 and Nier Automata (the nominees of last year), I still think there were some really solid tunes and melodies that stick in my mind. I’m going to take a ‘Rizk’ and put down Ni No Kuni II: Revenant Kingdom to snag the award for its majestic orchestral melodies.

Have you ever gone hunting in Red Dead Redemption 2 with earphones on? It creates one of the most authentic and immersive audio experiences I’ve ever played. I was able to match an animal to its call and track the direction it was coming from. The sounds of exploding heads from a blast of a shot-gun, the different sounds your horse makes galloping over different terrains, the screeching noise as a train chugs by and the cacophony as the busy crowds drown our Saint Denis. It really puts you in the world.

Celeste will be this year’s Hellblade. While Hellblade: Senua’s Sacrifice didn’t win GOTY last year, it won a whole lot of other categories. Celeste is a topical game and will be remembered for years to come due to its fantastic level design, memorable characters and moving story. Dead Cells might qualify because of the IGN controversy (not to mention the fact it’s good), but I think Celeste is the better bet.

I think all of these nominees deserve the award for best performance. All of them nailed their characters and each of them could easily win the award any other year. However, I think Christopher Judge is going to win this one. Firstly, many (including myself) thought it was impossible to make Kratos an interesting character. Christopher Judge not only did that but exceeded expectations and made him a relatable and complex character. Plus, he coined the phrase ‘boi’ and that in itself is worthy for the win. [Editor’s Note: Why isn’t there an award for Best Use of ‘Boi’ of the Year? It’s in the two biggest games!]
ARVE Error: Mode: lazyload not available (ARVE Pro not active?), switching to normal mode

Once again. In a parallel to Hellblade, Celeste will win the ‘Games for Impact’ category. Both games are very different but both confront the topic of mental illness and both feature a female protagonist. Celeste addresses some heavy issues but deals with them in a mature and positive way and in the process creates something that speaks to the heart and affects how I look at myself in my everyday routine. That’s impact.

This is a tough one. All of these games are outstanding titles that really know how to push VR in creating something truly world altering. What makes it harder is that they are all essentially different genres. Judging by overall quality, I am going to go with ASTRO BOT Rescue Mission. It is honestly one of the best 3D platformers I’ve ever played in any format and manages to integrate it with VR in simple, yet ingenious ways. I have reviewed all of these games this year and I think ASTRO BOT just edges out as the best, but any one of these nominations deserves the award.

Dragon Ball FighterZ. P.S. I think SFV Arcade got thrown in to fill the numbers, so I don’t think that will win at all.

I’m leaning towards Nintendo Labo. I don’t know much about it and I’ve played the games in the other categories but I feel that Labo has a certain unique buzz floating around it. Mario Tennis Aces and Super Mario Party are both fun games and the best in their respective series in a while, but they’re not fantastic. Overcooked 2 is more Overcooked and Starlink is fun, but I am not sure it is family fun. Let’s go with Labo.

Forza always wins these categories and Forza Horizon 4 is pretty damn great so I am pretty confident in this selection. Don’t let me down Spency!

I kind of want every other game on the list to win the award for best multiplayer game over Fortnite, but I think Fortnite will still probably win. Give them another Golden Joystick award and let’s move on.

Well, since The Messenger got nominated for ‘Best Indie Game’, I think it’s safe to say it’ll win ‘Best Debut Indie Game’, since none of the other nominees are in the other category.

I have no knowledge of or relationship with the eSports genre, so let’s look into my crystal ball and rapid-fire guess the next few categories….

SonicFox side switch against Go1 in DBZ

Winner: Josef Fares (A Way Out)

This is a weird category to predict, because they’re so different. But the one moment that will always stick with me from last year’s show was Josef Fares’ speech. It was nuts, it was crazy, it was beautiful. ‘Fuck the Oscars!’

So there you have it. No need to even watch the awards because you’ve just had a brief trip to the future with Rizky. See you next year.