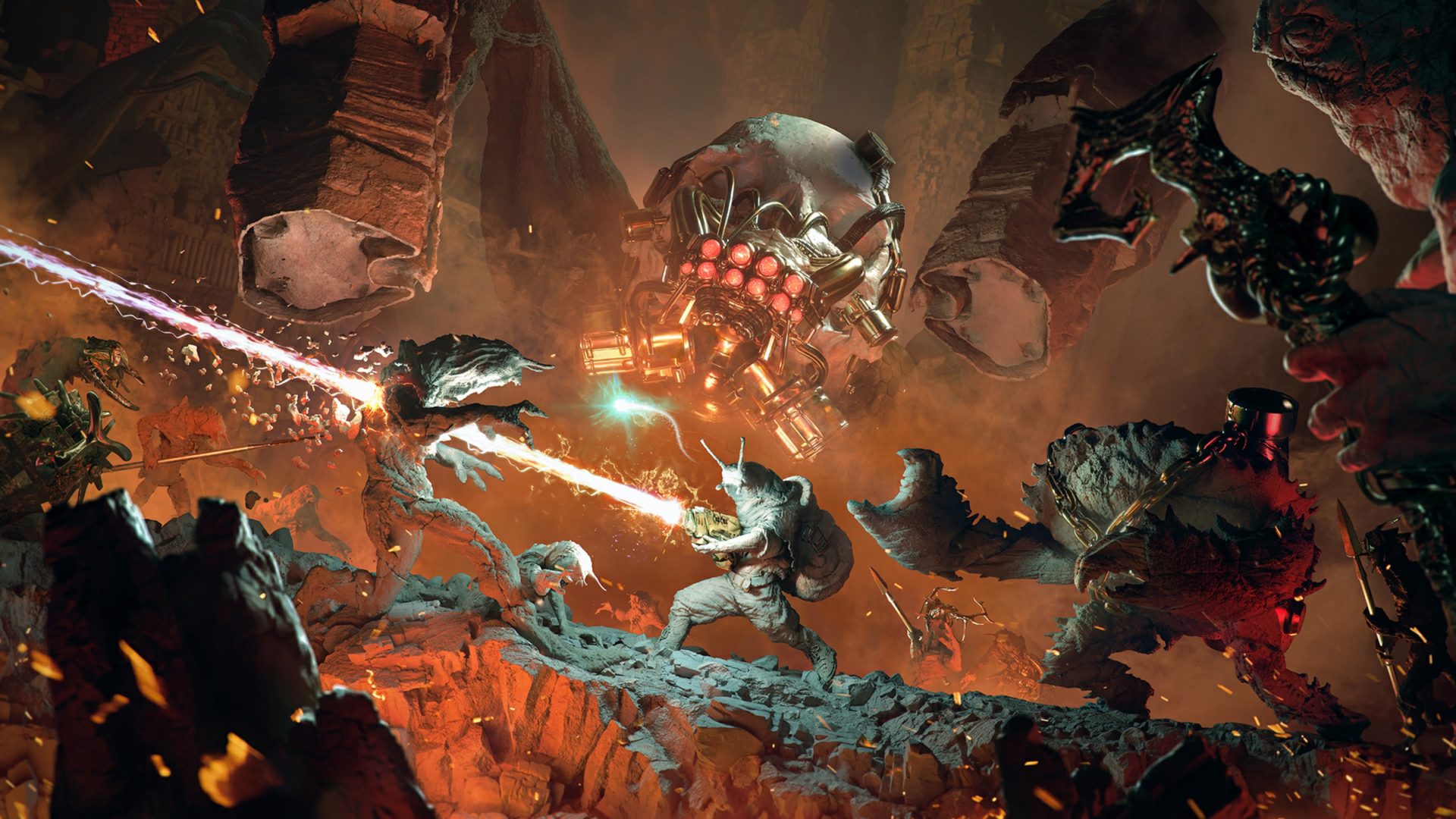 Clid the Snail is a weird concept to read in a blurb. “A twin-stick shooter about a grumpy snail” stands as one of the stranger game-related statements I have encountered in recent yore, but it served as an ideal serving of bait to get me hooked.

Stepping foot into Clid’s gorgeous and quirky world, I was quick to realise there was a lot I was missing. For example, the stepping of foot mentioned previously was quite a literal statement – because Clid has both arms and legs. While resembling our own world, this landscape has some history that I am clearly not privy to – for example, when/why did animals change in this way and when did snails start making laser guns? Why do the animals talk like Borat is guest starring in The Sims? Are all the humans dead? All these queries and so many more will remain unanswered as developer Weird Beluga is more than happy to concentrate on telling you Clid’s tale first and foremost – the rest could well come later.

While Clid’s narrative does nothing to break new ground, the presence of humanoid animals does a lot to elevate a story of banishment and finding a new place in the world. The main story beats will see Clid go from ostracised member of the Snail Citadel, to roaming saviour of others as he travels the landscape on behalf of a group of similarly ejected animal warriors that serve as ragtag mercenary peacekeepers. Throw in a few twists – perhaps a pinch of betrayal to taste – and you have a tale that is entertaining enough, with Clid personally experiencing a satisfying character arc.

The real treasure is the visual storytelling, although I am unsure how much of it is deliberate. The environments at play within Clid the Snail are a trove of unique oddities, as you come to realise that your humanoid animals are still very much to scale. Torches along a bridge will be revealed as matchsticks, sharpened pencils jut out of the earth like dangerous punji spears – you are exploring a world at macro-lens scale. This then widens out as you further explore the world, realising at one point that you are actually standing within the remains of a human being, where Clid and his companion firefly Belu will comment “I wonder what happened to the giants.” This mystery is uncovered and left to interpret however you wish.

Couple this with the odd dissonance at place when you notice that many of the animal-made environs you traverse are already ancient and crumbling – meaning that not only are you treading the ruined world of humans, but some kind of societal downfall has also occurred for the tiny kingdom. What on Earth happened? It’s a thought that lived in my mind rent free for quite a spell. But hey, it also meant that I got to enjoy an entire level dedicated to powering up ancient mobile phones to unlock gates to progress. They even displayed the classic mobile game Snake on their screen. Righteous.

I used to have loads of funny spine puns, but now my supply is bone dry

Now, the awkward part. This is where we talk about gunplay. Possibly in reference to the namesake of the game, the twin-stick shooter action is a bit more slower-paced than what you might expect. The initial weapon at Clid’s disposal hits like a wet noodle when fired rapidly, but charging it for a whopping 2–3 seconds can pack a massive punch. Sadly, your enemies didn’t get the memo regarding how slow and deliberate shooting may be, as many of them will come sprinting at you from off screen with zero warning. Though your arsenal does expand, and the inclusion of ultimate- style special attack ‘Shells’ beef up your firepower and resilience, this moment-to-moment gameplay still remains a mixed bag. For example, Clid does have the ability to dodge roll, however it’s borderline useless. The animation itself does not come with any invincibility frames, meaning you will get slapped regardless. In some cases larger enemies will manage to immobilise you mid-roll, basically a death sentence for what you thought was a frame-perfect evade manoeuvre. Newer guns will pack a punch, but will have a ponderously slow reload time and a scarcity for ammo that leaves you hesitant to incorporate them.

This is further compounded by some baffling set piece encounters that feel woefully under-tested. A horde-style mission at the Rabbit Citadel saw me defeating waves of enemies that came at me via a short maze structure. The narrow viewpoint of this area made me think that I was simply holding a chokepoint, but after a series of confusing (and sudden) mission failures I realised that particular slug baddies could actually sneak through the barricades off screen. So now I was trying to keep an eye on three distinct points of entry, while moving at a snail’s pace AND trying to defeat the enemies that sprinted at me from the chokepoint. It was miserable, and it had me considering what my time was really worth. It’s a draining feeling that every time you manage to perform better at the game, you are not improving mechanically — you are instead learning new ways to play around the janky nature of its more unforgiving mechanics. This is not the Dark Souls of snail shooters, you are instead measuring your patience.

Game has bugs. Wait, no, beetles

A lot of this could be alleviated with something as simple as a difficulty slider. The game ships with no method to change difficulty, and initially I wondered if I was playing on some kind of expert/hardcore snail setting. A lower difficulty that perhaps added some actual aim assist (the in-game aim assist feature is just an aim down sights mechanic that does next to nothing) or perhaps affected enemy behaviour would go a long way in making sure this game is accessible to a general bystander. In its current incarnation I can’t help but feel that it requires a ‘high tolerance for bullshit’ to keep at it and experience all it has to offer. Honestly, the amount of salt this little snail was able to instil in me is admirable – but here is a tip from one gastropod to another, get the SHIELD shell upgrade and revel in its invincibility window.

Beyond the frustrating elements, there is a lot to enjoy about the game. There is a cast of characters that I enjoyed learning more about, a world that was begging to be explored and a grumpy snail that had a heart of gold. Couple this with an interesting exploration of adoptive family and the heartless abandonment of kind souls, and you have some unique takes to muse on. There is also a soundtrack which I found to be beautiful and perhaps entirely out of place. It’s just hard to blast the guts of slugs and crabs across walls while listening to a sombre tune of a piano, y’know?

Clid will take on any fret

Like any good Metroidvania, you’ll unlock new abilities and gear that will allow you to uncover more of the map, a map that is filled to the brim with secrets and hidden collectables. Combined with the aforementioned slick platforming, I felt compelled to explore and push the boundaries of what was reachable. The map is fun to traverse and satisfying to uncover, if a little bland in places.

The diesel-punk aesthetic is cool, and I do love the mechanical nature of everything, but locations did start to feel a bit repetitive after a short while. I found myself checking the map every few moments because this corridor looked a lot like the last and it definitely looked like the one before that. Luckily, the character design is one aspect that I never grew tired of. From the underhanded and sneaky rat clans to the robotic canine foes, every character model is full of character and life. I actually grew to love the Iron Dogs, who reminded me of the dim-witted Droids from Star Wars: The Clone Wars in their banter when left alone.

Kermit is slightly more badass in the video game adaptation

Overall this title is no gastropod-inspired gaff, rather it is a beautiful game filled to the brim with heartfelt care and personality. It’s most egregious sin is a poorly interpreted idea of challenge, which instead ends up feeling more like a chore than deliberate difficulty. Realistically in a world where games can receive proper care and attention post-launch, I have to urge people with interest to keep a close eye on Weird Beluga and its strange little world, because what is truly oozing from Clid the Snail is not just slime, but potential. 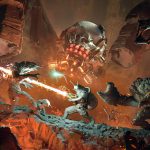 Clid The Snail Review
Snailed It..?
Clid the Snail somehow manages to shoulder a cumbersome load of gameplay issues; opting to carry your attention with a unique cast of characters that tell an interesting story within a world that commands your interest.
The Good
Beautiful world begging to be explored
Fun characterisation across the cast
The small world aesthetic is rad
Shells are a unique and hard-hitting hook
Tight little narrative
The Bad
Frustrating combat sections feel badly designed rather than challenging
Guns run the gamut from world ending to tickle feathers
The small world aesthetic is criminally underutilised
6.5
Has a Crack

Clid The Snail Review
Snailed It..?
Clid the Snail somehow manages to shoulder a cumbersome load of gameplay issues; opting to carry your attention with a unique cast of characters that tell an interesting story within a world that commands your interest.
The Good
Beautiful world begging to be explored
Fun characterisation across the cast
The small world aesthetic is rad
Shells are a unique and hard-hitting hook
Tight little narrative
The Bad
Frustrating combat sections feel badly designed rather than challenging
Guns run the gamut from world ending to tickle feathers
The small world aesthetic is criminally underutilised
6.5
Has a Crack
In this article:clid the snail, Koch Media, ps4, PS5, weird beluga