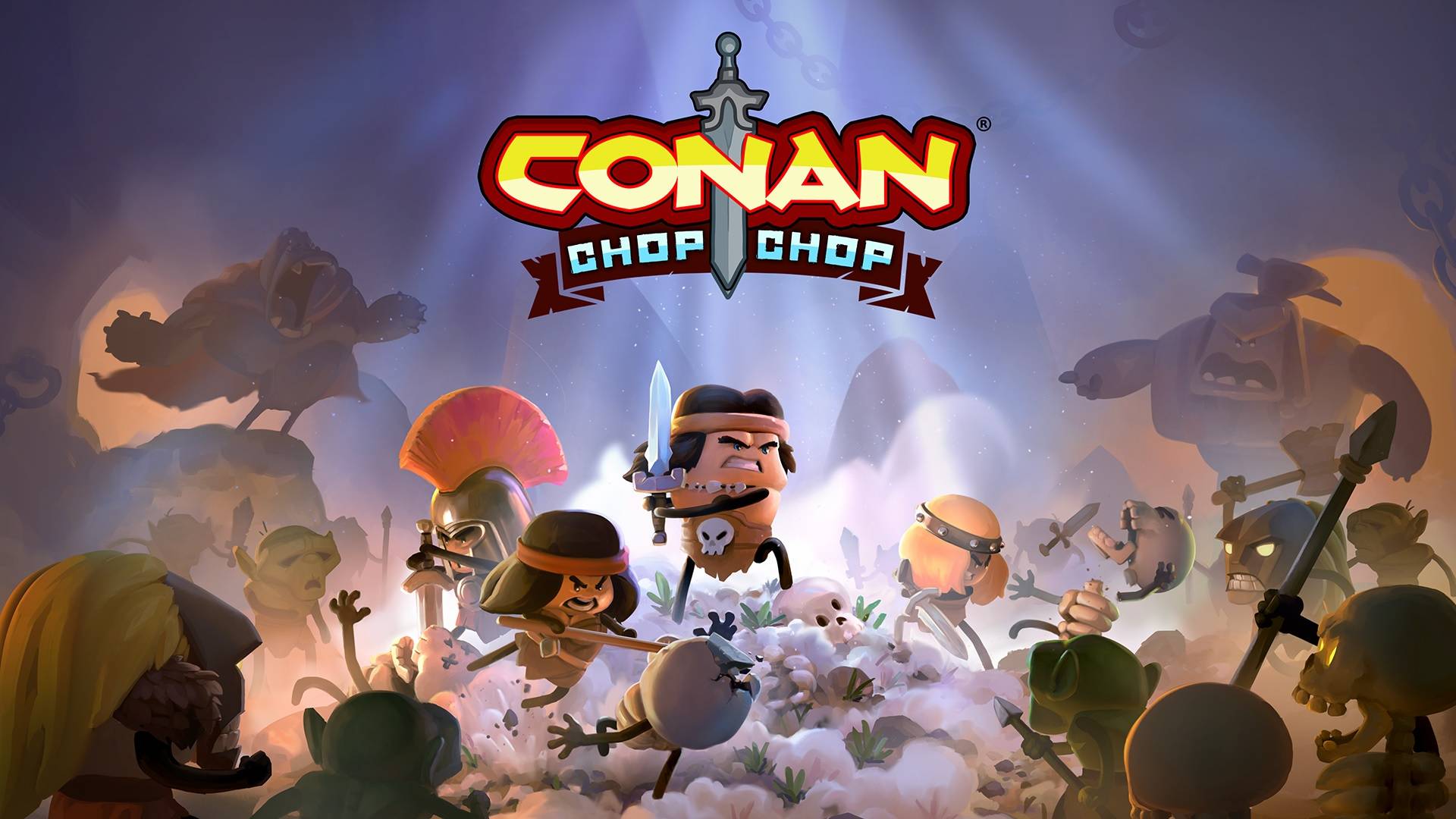 Previously known for a 50+ title strong mobile games catalogue, Adelaide-based games studio Mighty Kingdom deliver a brutally whimsical take on the Conan property in their first console release. Conan Chop Chop is a delightfully amusing and cartoonishly colourful take on the Hyborean universe currently overseen by publisher Funcom. You and up to three other players are participating in a contest of champions to slay four mighty guardians within their respective dungeon lairs for the promise of riches. Secretly, the evil wizard Thoth-Amun is seeking a powerful champion to sacrifice and raise the great god Xaltotun. Welcome to the glorious ‘Wrath-a-thon’.

Players choose one of four characters from the Conan catalogue. The titular hero cares little for his health as he focuses on reckless jumping into battle and demonstrating his glass cannon fury. He is joined by a nimble archer who mows down enemies at range, a tank who rushes into fights with a shield dash, and a sword swirling warrior who spins to win. The heroes begin in a crumbled town centre of Nemedia. They can purchase some initial equipment and passive abilities before setting off into the wild. These purchases also restore the town to its former glory, repairing the storefronts and offering a greater variety of crucially different build options with which to begin the next expedition.

An April Fools’ Conan joke? Never heard of it.

Conan Chop Chop sits in the genre of isometric rogue-lite dungeon crawler, meaning your warriors will have to survive on slim odds and limited health to clear each zone of baddies before the option to move into the next areas opens. Ducking through each new randomised room is initially directionless, involving familiarisation with the small ensemble of enemies that will be specific to that environment for each run. Most zones will have a chance of encountering item shops, lost merchants, and some surprise mini-bosses with rewards that turn future fights with skeletons, wizards, and slimes into burning pools of goo within seconds.

Runs, or attempts to progress the game from a starting position of basic equipment and abilities, will inevitably end in failure due to the untimely demise of our heroes against ever-increasing challenges. Upon starting in town anew to face these guardians all over again, a persistent currency will be earned from previous enemy encounters and used to buy new variations of equipment, weapons, and charms. There is also an account-bound experience system called warrior points. The more bosses you defeat and the further you progress before death will result in these points that can be used to unlock permanent traits and boosts for future attempts. This dance of battling through gritted teeth and sweaty palms with the near-certain likelihood of failure ahead is an essential part of your training. The aim of this game is to eventually get that one special run where the stars align and your skills are sharpened for the fight against Xaltotun and the four underlings in a single session.

Chop ’till you drop

What sets Conan Chop Chop apart from similar games like The Binding of Isaac or Enter The Gungeon is the featured four-player co-op and ‘party game’ design. Chop Chop is an experience that benefits from friends, but not necessarily for the purposes of beating the game. Rather, the ‘party’ is the revelry of surviving the moment-to-moment chaos with like-minded and cross-eyed companions. Triumphing over each room or zone’s quick couple minutes of arrows and bombs flying everywhere while having the time to scream (and subsequently, breath) on the couch is key to what makes this a party game. The pick-up-and-play ease of the simple and tight controls means that your casual to the seasoned gamer is going to be sweating up the controller while switching between bow, melee, bombs and dodges deftly as the screen erupts.

With so many special effects, characters, and traps springing across the screen at any one time, it helps that the cartoon art is simple and readable. The plain colour schemes tied to each area help make the important actors pop during each cacophony of cartoon eruptions. The thickly outlined characters and distinct enemies mean you will never be lost amidst the craziness on screen.

Conan Chop Chop is snack food. A high-calorie game in a low carb chocolate bar. If I needed a break from a long, hard day of searching for a consistently engaging experience in Forbidden West – Chop Chop. Needed to ease out my anxiety from tiptoeing through bushes in Elden Ring – Chop Chop. Got the sads? Why not slay some slime while there’s no sunshine? There are worse ways to commit yourself to an hour of failure.

On the analogy to snack food, this game’s definition of ‘party’ is the same as Costco’s. It took me a solid 20 hours before even reaching the final guardian. There have been at least half a dozen attempts to best it since. Each of these ended in 60 minutes of failure and a wealth of warrior points and currency for my next run. This was solo, which became my preference if I wanted to actually beat the game. Playing with even one other person meant I fell victim to the party game issue of ‘shit, I thought I was controlling your character there’. The one saving grace is that downed party members will revive once a room is cleared of enemies, but shared loot means that your job is monumentally harder when the player with the best weapon goes down in a boss fight. Playing solo means not sharing the juiciest of the rare loot drops, but one slip can mean restarting your game.

Reaching that final boss with a dedicated group may also be pushing the commitment-free nature of the party game. Onboarding new players is initially painless on paper. The controls are intuitive, with the twin-stick shooter controller meaning anyone with nimble thumbs will be chop-chopping within seconds. Unfortunately, my test subjects found the 2D character models hacking and shooting in eight directions felt initially sloppy and discombobulating. Difficulty judging 3D depth with 2D characters is an idiosyncrasy typical of the genre that skilled players are expected to overcome. Repeating the soothing mantra of, “it’ll feel more natural with time” did fuck all to coax them back for repeated sessions – let alone potentially 30 hours of partying.

As an entry-level rogue-lite, Conan Chop Chop is the safest pair of hands I can recommend. It gives a great taste of the wild customisation and fickle randomness that genre fans love and hate. Players familiar with genre greats like Isaac will find a formidable challenge that rivals the best while pruning their unforgiving complexities in favour of approachable appeal. 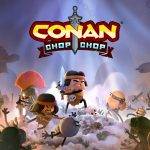 Conan Chop Chop Review
Kid-friendly Conan Pulls No Punches
Opening up the gruesome and adult world of Conan to school-aged children is a hilarious surprise but Chop Chop’s greatest feat is lowering the rogue-lite barrier of entry for the curious solo adventurer or group only to slay them mercilessly.
The Good
Approachable carnage across player counts
Bold cartoon art keeps game readable amid fights
Deceptively rewarding challenge
The Bad
May be too difficult for long 'party' sessions
Runs can feel destined for failure, particularly early on
Few fresh ideas
8.5
Get Around It

Conan Chop Chop Review
Kid-friendly Conan Pulls No Punches
Opening up the gruesome and adult world of Conan to school-aged children is a hilarious surprise but Chop Chop’s greatest feat is lowering the rogue-lite barrier of entry for the curious solo adventurer or group only to slay them mercilessly.
The Good
Approachable carnage across player counts
Bold cartoon art keeps game readable amid fights
Deceptively rewarding challenge
The Bad
May be too difficult for long 'party' sessions
Runs can feel destined for failure, particularly early on
Few fresh ideas
8.5
Get Around It
In this article:australia, Conan Chop Chop, Conan The Barbarian, mighty kingdom, Nathan Hennessy, PlayStation, roguelite, Steam, switch