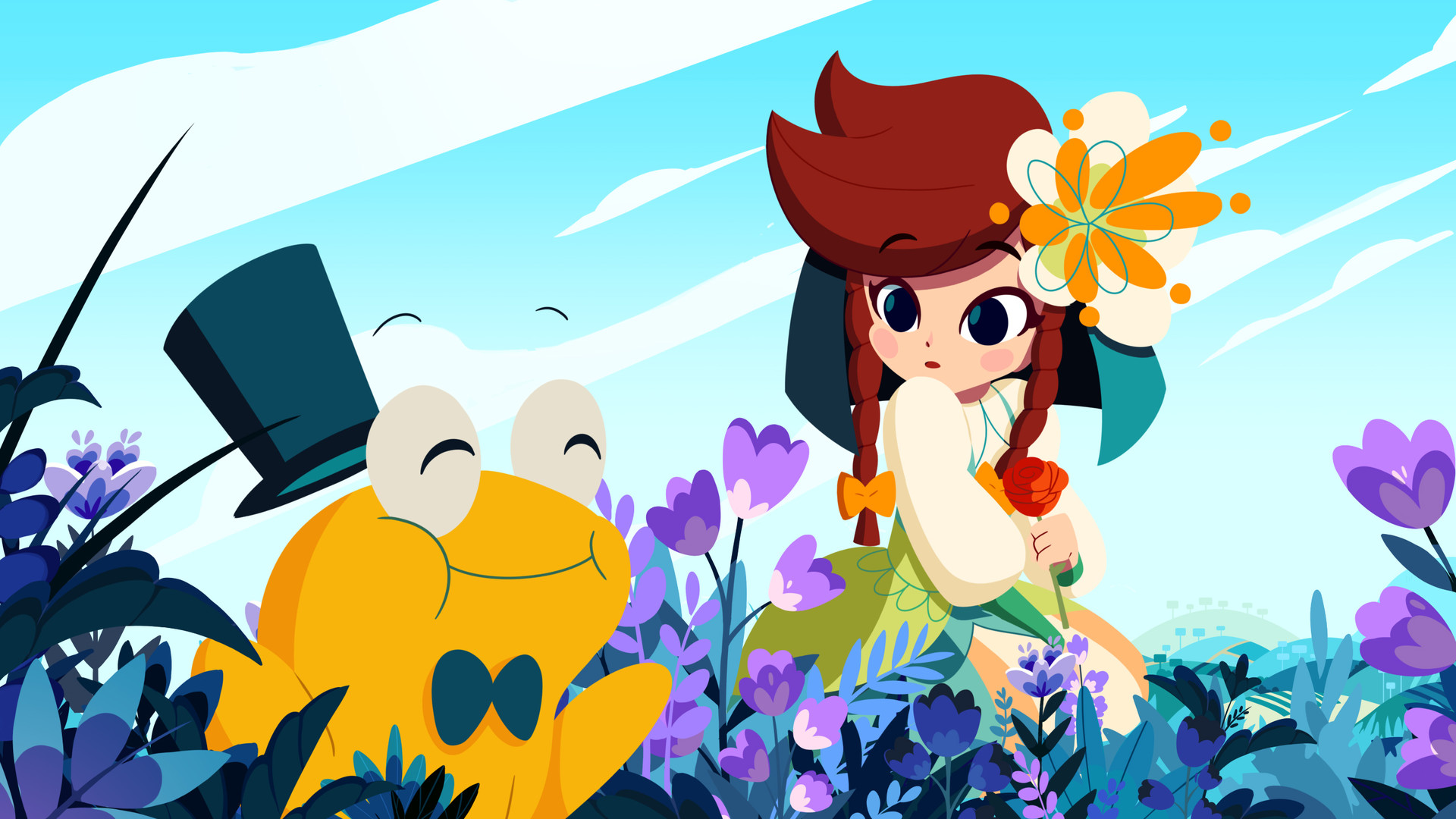 Time is the only finite resource in your life. You may run low on water or food, but there will always be some about. Money is something you may exchange time for, but you can change nothing in return for it. In reality, that’s simply the way things are. Every second is precious, and forever vanished when passed. The folly of humankind is to peddle it as currency, to force their fellow human beings to slave away their unreplenishable stockpile of time for mere survival.

Cris Tales, from Columbian studio Dreams Uncorporated and partner studio SYCK, is our species’ attempt to turn this constant horror of time permanently slipping from our grasp into a cute JRPG. Taking cues from early polygon classics like 1995’s Chrono Trigger and 1999’s Valkyrie Profile, Cris Tales immediately hooks the player on a whimsical story with a serious tone and a gorgeous visual style. The Nordic folk-inspired visuals are truly something special, lending every part of Cris Tales’ world a charm as irreplaceable as that lunch break you spent waiting in line.

Colours pop and compliment their inks, and the floaty animations lend a dreamlike grace to the world around them. The warm lighting on its characters and environments compliments a soft sound design a-la 2002’s Kingdom Hearts. These parts make up a sum that’s truly remarkable. It’s abundantly clear that a lot of thought and love went into Cris Tales’ pleasures for the eyes and ears. I haven’t played a game that’s this good at making each location look unique, while remaining artistically disciplined as a whole, in a good while. It’s refreshing, and absolutely makes the game worth a look for anybody interested in visually comfy games.

Cris Tales’ story is one that wouldn’t be uncomfortable in a smaller-budget Japanese title: a child discovers an ancient power that she then pledges to rid the world of a great evil with. Along the way, she finds new friends and encounters new enemies. Character development/love triangle ensues, and then fans complain when its first movie is a clip show. That’s not exactly what happens in the story, by the way. Just wanted to keep you on your toes. By no means is it a non-intriguing tale, but it certainly won’t be winning any awards.

What sets Cris Tales’ story and gameplay apart from its peers, however, is its raison d’etre: the ability to see the Past, the Present and the Future simultaneously. Whether exploring the game’s rich world or facing foes in fierce fights – more on that soon – the screen will (most of the time) be split into three sections. To your left, the Past. Your middle, the Present. The Future is your right hand man, so to speak, because it’s both on the right of your screen and what you’ll be using the most…even when you’re not technically using it at all.

The game’s combat, acceptable on its own in a safe JRPG way, is only marginally improved by the passages of time…

Inside each of these split sections, visible during exploration and questing, these points of time will show their wicked secrets. A city will be vibrant and plentiful in the Present, but in the Future it’s ravaged by an immortal enemy of civilisation: low contrast! Oh, and also death and decay. Using this vision of the future, Cris Tales makes its most convincing argument about its time system. By sending your talking top hat-wearing time-travelling frog into the past or future, you can discover the cause of such disasters and travel to the past to fix them. Sometimes you can fix a problem in the present, but anybody who knows how expensive talking top hat-wearing time-travelling frogs are to rent will understand why this isn’t a priority.

Cris Tales’ sidequests are highly satisfying this way. Opportunities to avoid future devastation are rewarded with a change in the area’s future vision, but you’re usually presented with a binary in these circumstances. The first of these, for example, involves a city that is gripped by a magic rot hell-bent on showing termites who the real Slim Shady is. You gather the ingredients required for an antidote, but you’re forced to choose between one of two buildings to save. Immediately, whichever building you restore is in tip-top shape when the future comes. On the other (clock) hand, the one you leave to the ravages of time has since listened to Revival and fallen apart in anguish. They now know who the real Slim Shady is…but at what cost?

The game’s combat, acceptable on its own in a safe JRPG way, is only marginally improved by the passages of time once the fun bits are wrung out as well. In combat, enemies come from two directions, each being susceptible to the Past and the Future. They can be thrown through either, depending on what side they’re on. Not only does this change their stats and abilities – a grunt can be turned into a grizzled veteran that’s a little slower but has learned some stronger magic in their old age – but other characters’ abilities can be chained with them to achieve some real ‘eureka’ moments. This ranges from hitting a metal enemy with water then throwing them into the future where the water has rusted them, to resetting previous damage to lure out a problematic extra element.

Just as in questing, moments like these come frequently during combat but become less novel as they repeat themselves. There’s also a Paper Mario-like timing mechanic to beef up attacks and deflect incoming damage, but it fails to add much to the dull combat loop. Not mastering it leaves you open to one-hit-kills from tougher enemies though, which can prove fairly intense and non-welcoming to those without rhythm (me). Trust me, I play Guitar Hero on Easy and still miss notes.

I think that this neglect of its core strength, the time shenanigans, is where Cris Tales’ discipline from the art direction ironically dribbles into places that it doesn’t belong. Its shiny visual apples never fall far from the tree and all wait patiently for a bite, but its gameplay pears are stuck in one of those meme videos where every time you bite into one the next one grows and rots faster. Every fresh instance of the time mechanics in-game becomes harder to find, and this does have the unfortunate side-effect of making you subconsciously rush through the middle and late game. There’s limitless potential in that tree, but the game is dead-set on only letting itself do so much with it. That’s a real shame, because Cris Tales is a title that does well enough in its other departments.

Even cool later mechanics are absorbed into the grind

Cris Tales’ art, writing and voice direction form a cozy JRPG with the right amount of grit, but its woefully lacking variety in how its time travel mechanic is implemented both disappoints and frustrates. Combat grows dull conventionally, especially once these small mechanical pickings are consumed and discarded. A game that deserves more love, but is very bad at convincing you why. 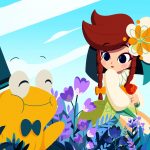 Cris Tales Review
Time To Get A Watch
Cris Tales is an enchanting story wrapped in a gorgeous visual style, but lacks sustained imagination in gameplay. JRPG players will find enjoyment within, but those less patient may be turned off after a few hours.
The Good
Brilliant visuals
Strong writing and sound
Mechanics are interesting...
The Bad
...for a while
Restrained use of 'gimmick' mechanic
Becomes a slog
6
Has A Crack

Cris Tales Review
Time To Get A Watch
Cris Tales is an enchanting story wrapped in a gorgeous visual style, but lacks sustained imagination in gameplay. JRPG players will find enjoyment within, but those less patient may be turned off after a few hours.
The Good
Brilliant visuals
Strong writing and sound
Mechanics are interesting...
The Bad
...for a while
Restrained use of 'gimmick' mechanic
Becomes a slog
6
Has A Crack
In this article:2021, Cris Tales, dreams uncorporated, jrpg, modus games, nintendo, review, switch, SYCK