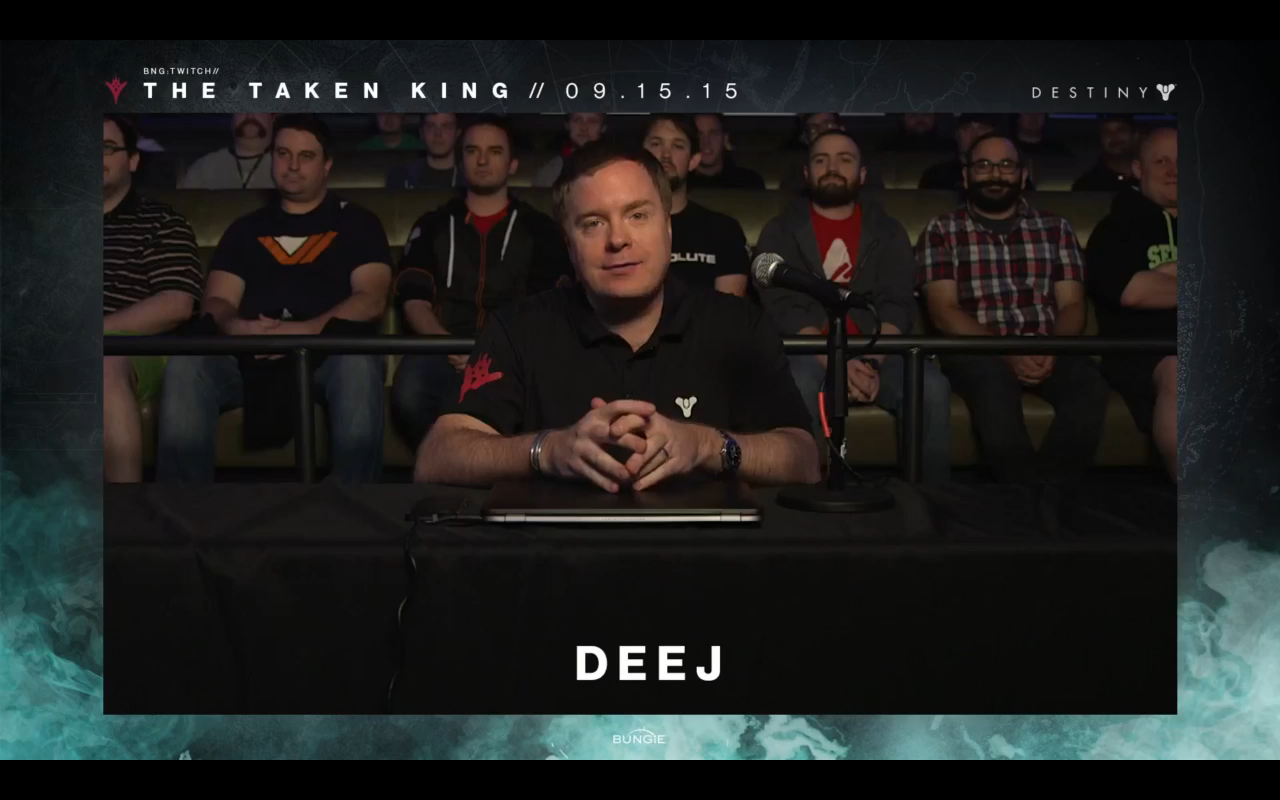 So this morning at 4am AEST Bungie hosted a Twitch Stream event which revealed and gave us a look at the new Court of Oryx public event  coming to Destiny in The Taken King. The host of this stream was none other than our beloved Deej, however he did not really offer too much to say seeing as he did not have his hands on a controller. The fireteam that would be walking us through the Court of Oryx event consisted of Urk (Deej’s superior), Laced Up Lauren and Ben Wommack (Designer). Now, let’s dive in shall we?

First up we have a brand new exotic sword. This was revealed to us by Lauren inspecting this weapon. It was here that we were explained how swords will not be a random drop in The Taken King, you will have to forge them. How you go about doing this is still unknown. As you can see, this weapon’s damage value is a massive 310. For those of you how are thinking “that’s weak, we currently do 365!” Year-One weapons’ equivalent damage value in The Taken King is 160, so this swords damage value is almost double that of Year-One. Now let’s discuss the Court of Oryx and how you go about initiating said event:

When you are patrolling the Dreadnaught you will see Taken orbs like this one. You must walk near this orb and spawn a bunch of Taken enemies. Eliminate all the enemies and you’ll receive a rune. These runes are essential to starting the Court of Oryx. Now once you have collected this rune you will head over to the Hall of Souls (a Ginger’s dream as stated by Wommack) and through it until you reach a hallways that has a bunch of statues. Wommack stated that this room was very Shadow of the Colossus-like in the way that there are the states which show your accomplishments.

So the Court of Oryx will come in three tiers. Tier one will require that basic rune which you may have collected. Placing the rune in the statue closest to the arena will initiate a Tier 1 Court of Oryx event. This event is ind of like Prison of Elders, however there are actual mechanics tied to these bosses. From what we saw there is a knight who has rotating shields like Valus Trau’ug in PoE, two knight-brothers whose shields only go down when they are in close proximity to each other, three wizards which need to be killed in rapid succession otherwise they are resurrected and an ogre whose shield will only break when a cursed thrall explodes near it. Overall, these bosses do seem challenging, however, not impossible to do by yourself. The emphasis for this public event is on teamwork. The person who initiates the public event MUST remain inside the arena. If they die they have 15 seconds to return to the arena and respawns are on a 5 seconds timer. Initiating a Tier 2 event requires a different rune (I can’t quite remember the name of it) which also requires three Tier 1 Court of Oryx completions. Tier 2 is just like Tier 1, however you are pitted against two instances of bosses at the same time. This is completely random so you may be unfortunate enough to get the 3 wizards and the two knights at the same time. Tier 3 was not shown to us but I am going to assume you go about it the same way, with just harder enemies and 3 bosses at the same time (possibly).

Is that an Oblivion gate?

Now, at the end of the stream Luke Smith hijacked Deej’s position and spoke to the viewers. He spoke about how the team have been asked countless times about the raid and how they have refrained from answering. He faded to black and there was a brief trailer for the raid. It should be noted that this trailer is supposed to be a LIVESTREAM exclusive and anyone who has uploaded this trailer is a knob jockey. We didn’t get too much information other than we are challenging Oryx, what seems to be a new platforming part reminiscent of the platforming in VoG and the release date. Yes it is true, the King’s Fall raid will NOT be open right at launch. It will, however, be open 3 days after launch on September 18th (probably 19th for us Aussies). Personally I think this is a very good decision as to keep people from rushing to reach max level and tackle the raid.

Well that is all that I have for you today. Currently you cannot watch a backlog of the stream unless you go to a third-party YouTuber, however I will not provide a link as they are not the official publishers of this video and are also probably leaving the exclusive trailer in too. An edited version of the stream will be uploaded some time tomorrow on Bungie’s official YouTube Channel. Are you excited for the Court of Oryx public events or are you more excited about using an exotic sword? I wonder how often it’ll be used in the Crucible. Let us know in the comments below. For the meantime…