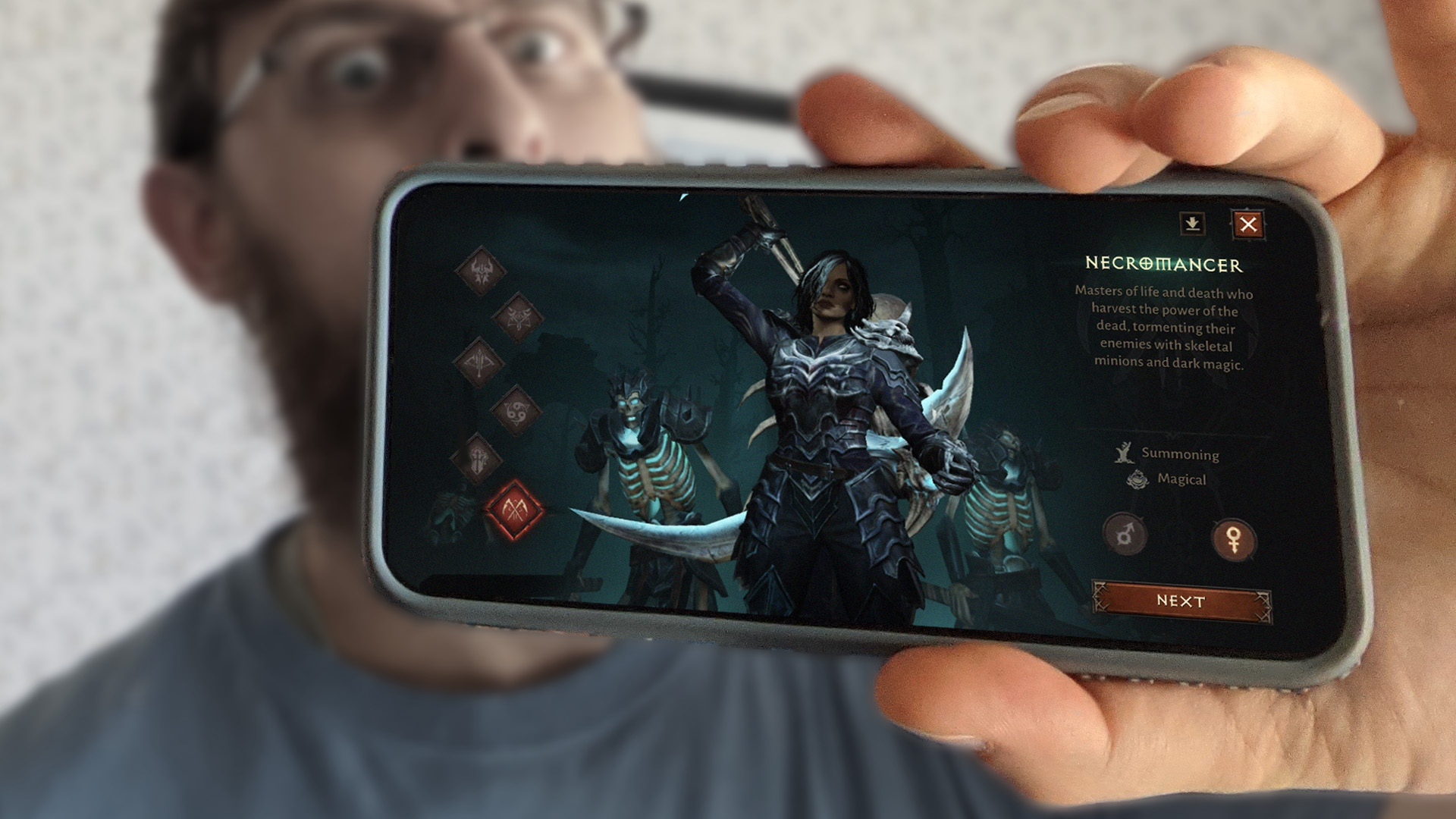 The closed beta for Diablo Immortal is in full swing, and I have to admit my trips to bathroom have taken a fairly demonic turn.

My experience with the closed alpha revealed that the handheld hell game was incredible competent – with a very tight and enjoyable gameplay loop that worked beautifully in portable form. Sure, I keep asking the question as to why not simply release on PC (which seems to be happening whether Blizzard likes it or not) but given how bloody solid the title words on a phone, I will continue to crush my Pixel 5’s battery life with nightmarish monster mashing.

While the closed beta is packed to the BRIM with exciting stuff, the real highlight to me is the Necromancer. You can make a hundred Diablo games, and I promise you the ones that will be the most popular will always include the manipulating master of morbidity – the class is just iconic.

There is a core bingo sheet of Necromancer mechanics that feel essential – summons, explosions; big flashy projectiles – and as long as you nail this, the rest can be souped up and changed to really embrace the evolution of the class. The Necromancer of Diablo Immortal does exactly this – nailing the core, while also giving some tasty fleshed out changes to some old favourites.

Sweeping enemies with giant spectral scythes, impaling baddies with skeletal fingers erupting from the earth; it’s a bonanza of bone-shattering bliss. With any Hacky McSlashy game, if I can enjoy the minutiae of the combat engaging and fun at all times, I will remain on board.

One particularly neat little enhancement is the thought that has been put into how Corpse Explosion works on your device. In Diablo games past, it was a frenetic flurry of screen clicking as you targeted corpses to pop and damage enemies. While the panicked button presses had it’s own charm, the Immortal version of the ability instead targets with a cone – prompting all rotting flesh in that direction to unleash it’s putrid payload. It is incredibly simple to use, and as the ability progresses within your own player power increasing you will find it remains devastating.

Besides your own personal attacks, there is the usual throng of bony buddies to help out. Command Skeletons is exactly what you might expect, as you summon and command calcium-rich chums to do your bidding. They are no slouch in combat either, I’d often be looking for the odd remaining baddy in an area only to find the gang accosting them in a dark corner.

Now I am nowhere near elite enough to dip my toe into the PVP action of the game – but it’s actually quite surprising how developed the player bloodshed offerings are. Reading about leaderboards, the ability to become a golden god and crush people in the Challenge of the Immortal mode; I’m intrigued enough to want to give it a go. Seriously, the idea of thirty players trying to take down one massive mega player strikes me as a recipe for chaos – the good kind. I am just too busy trying to chase some of the new Set Items that appear in the game, but I suspect I am not quite at a point where they can be expected to drop reliably.

As 2022 draws to a close, there is a lot to think about in regards to Diablo Immortal. It’s come a long long way since it’s sad unveiling at BlizzCon, with a noticeable vigour to try and convince people that it can be recognised as a valid entry in the Diablo game family. If it’s progress continues on this trajectory, I can see a very promising title that will surprise many.

It’s baffling that in a year of chaotic and alarming revelations for Blizzard as a company, one of the more stable and promising developments is the very same thing that elicited a query of “Is this an out of season April Fools joke?” in front of a massive audience.

I know I personally will be adding it to my increasing list of ‘Blizzard Things To Monitor’ as we enter the new year.

Diablo® Immortal™ is a mobile Massively Multiplayer Online Action RPG (​MMOARPG) developed by Blizzard Entertainment in partnership with NetEase for Android and iOS smart devices. A release date within 2022 is expected.

In this article:diablo, Immortal, mobile