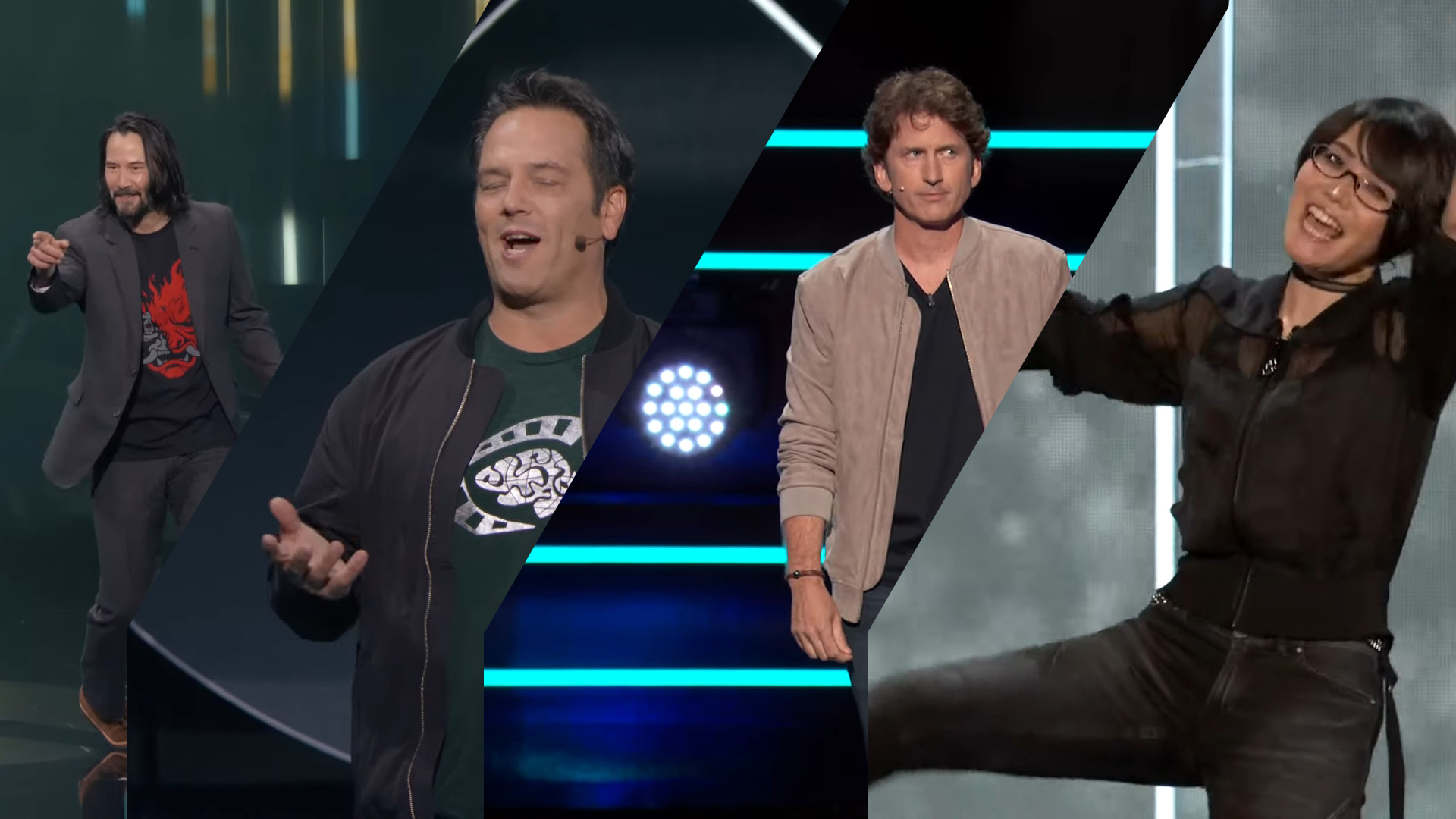 It’s the time of the year where gamers and industry members are meant to be full of joy and excitement as we’re treated to a bevy of new projects, fresh looks at existing games, and whatever else game companies are working on.

However, this year feels different – it lacked the pizazz and punch of previous years; maybe Sony’s presence really does bring out the best in the event, or maybe I simply expected too much from Xbox and Bethesda. While there were a number of good announcements, there was nothing overly mind-blowing, with the heavy reliance on cinematic trailers over gameplay sequences a disappointing reoccurrence on day one.

While my hype levels remained in check leading up to E3, I was cautiously optimistic about Xbox’s showing. I mean without PlayStation closing out the festivities this was their chance to go big and dominate E3 without any real competition, and while Xbox’s presser was ‘fine’ and had a few highlights, it was more a classic Ricky Ponting Ashes innings than Michael Bevan hitting a four with the last ball to win the match for Australia. If you don’t understand that reference (and I don’t blame you if you don’t), it means they played it safe. Good, but safe.

For all the pre-E3 talk of fourteen first-party games and new Xbox information it was hardly a showcase for the ages. There was a heavy reliance on cinematic trailers (which seems to be the norm so far this E3), and the pacing of the show felt odd – AAA, indie and service announcements all bungled together in a weird order that felt like a rollercoaster of a presser.

There was plenty to like though. Obsidian’s The Outer Worlds, while not being a game that grabs me by the plums, showed enough to suggest that fans of that gameplay style will have a good time. Plus Obsidian has a fairly good pedigree when it comes to games of Fallout ilk. Bloober Team’s take on the Blair Witch universe looks creepy and compelling, Melbourne-based Team Fanclub had their debut title Dead Static Drive flaunted during an ID@Xbox montage, Flight Simulator will be back in the skies in 2020 which pleases a lot of people, we saw new gameplay footage and got new story details for Dying Light 2, and we also got a release date for Ori and the Will of the Wisps (February 11, 2020), which looks damn good.

However, without a shadow of a doubt though the highlight of the show was the Cyberpunk 2077 sequence. Not only because we got a long-awaited release date (April 16, 2020), but because everyone’s boi and all round nice guy Keanu Reeves will be in the game (plus he told us we’re all breathtaking). While it’s common knowledge that CDPR are showing off the game again behind closed doors to the press, it’s a bummer that a gameplay demo wasn’t shown off during the presser. Let’s all hope and pray to the cyborg gods that CDPR releases the footage publicly again.

#KeanuReeves is the best. That is all.2019 is the year of Keanu. pic.twitter.com/Zl8UhcCYP0

But there were also a number of announcements that failed to have an impact. Battletoads in particular was a game that I was very excited to see and what was shown failed to set off any form of excitement. It was always going to be a challenge when reviving an IP that has been dormant for so many years and Rare were never going to please everyone. The art direction of the game is the biggest disappointment for mine. The toads look like they lack the attitude that made them total badarses back in the 90s. Although three-player couch co-op sounds neat. For another year Xbox waffled on for too long about services – such as Game Pass. No one can argue that Xbox has made exceptional industry-leading changes in this area, however this is kind of news that can easily be sent out via a press release, not a dedicated section during arguably the biggest games showcase of the year.

While we love our indies here at WellPlayed, too often an indie announcement was bundled between bigger announcements, and as a result it was forgotten about as soon as the next sequence started. Also some announcements just felt out of place or lacked any real conviction, such as State of Decay 2 DLC and Gears of War 5 (which launches on September 10, 2019), the latter which was given a smidgen of gameplay airtime (yes it had it’s own stream a bit later, but even that didn’t blow my socks off), with the devs showcasing the game’s new Escape Mode instead.

The most disappointing aspect of the conference as said above was the lack of any real exciting AAA showings from a gameplay perspective. Cyberpunk 2077, the newly-announced FromSoftware and George R. R. Martin game Elden Ring, and Halo Infinite were all shown off with cinematic trailers. After all the brouhaha after on social media about Xbox showing ’14’ Xbox Games Studios titles I really expected to see at least one, maybe two new AAA first-party games – hell with PlayStation at home with their feet up I thought any third-party publisher wanting to announce their game (such as a Capcom or Deep Silver) on the biggest stage would have jumped at the chance to grace the Xbox stage, but we got no new AAA third-party multiplatform titles either.

Then came the Xbox Scarlett reveal of sorts, and while it all sounded grand and great, we’d already heard the message of no loading times and increased performance from PlayStation when it came to next-gen consoles. It seemed like a missed opportunity to one-up PlayStation by showing Halo Infinite running on the Xbox Scarlett – giving players a glimpse into the future Phil Spencer had just finished trying to sell the crowd.

It was always only going to be a matter of how long it took either Pete Hines or Todd Howard to apologise for the Fallout 76 debacle, and it didn’t take them long. This presser was classic Bethesda; start with a big franchise, talk about the community endlessly, throw a couple of surprises into the mix and end with a bang and a Collector’s Edition. The tried and true Bethesda E3 formula was there for all to see, and it was good without being great – a bit like Xbox.

If there’s a dead horse to be flogged you know Bethesda is going to be first in line grab the crop (horse whip) to beat the shit out of it. Todd Howard went to town on such horse and explained how Bethesda had been ‘rightly criticised’ for the launch of Fallout 76 and what their plans were to fix it. They announced a slew of information about what players would receive in future updates, including a dedicated story and NPCs, as well as a 52-player battle royale mode. Cool.

Then the Elder Scrolls and its three-pronged money making head was given the stage for what felt like an eternity. The mobile title Elder Scrolls Blades was announced for Switch and that it would be cross-play (plus saves carrying over), which is neat, but it’s hardly something that would send a normal crowd into raptures – which it did (more on that later). Then Bethesda shared new information about its Elder Scrolls Legends card game, which again had the crowd fawning.

A Commander Keen title was announced to the nostalgic shock of many, however that budding excitement soon turned to disappointment as it was revealed that it would be a mobile title (one that looks like it could rake in a few dollars or two).

Just as it was starting to look like this was going to be a fizzer, out came legendary game creator Shinji Mikami (Resident Evil creator) from Tango Gameworks, who announced the studio’s new game Ghostwire: Tokyo. He then introduced the crowd to his young protege Ikumi Nakamura, game director of Ghostwire and what proceeded was one the most genuine and adorable moments in E3 history. Nakamura couldn’t contain her excitement, smiling from ear-to-ear as she announced details of the game, including one memorable moment where she called the game ‘spooky’, which has been GIFed for your pleasure by WellPlayed’s very own Kieron Verbrugge. Also Ghostwire sounds dope, although it too was only given a cinematic trailer, which was almost Kojima-esque in its levels of confusion.

The momentum continued on with a showing of the upcoming Wolfenstein Youngblood and Wolfenstein Cyberpilot. Arkane’s new game Deathloop looks cool in concept but again with only a cinematic trailer on offer it’s hard to get a read on what the game really is. They tried to reignite some interest in Rage 2 with some fun looking DLC and announced a streaming service called Orion, but there was only one thing people wanted to see as the presser hit the crescendo.

There’s no doubt that Doom: Eternal was going to be one of the showstoppers this E3, but it felt like it was more than that. This was a captain’s performance from Doom guy and id Software, delivering the high that viewers were holding out for thanks to some tasty, visceral and tight gameplay footage (the magic of gameplay footage hey). Not only did it nearly lift the roof off whatever extravagant building Bethesda had hired for the evening, but it also reminded everyone just how badarse video games can make us feel (you know because of the gameplay). In further good news, it was announced that it’s coming November 22, 2019. And you can buy a Doom guy helmet.

The biggest sour note of the event was the obvious artificial cheering that went on during Bethesda’s early sequences, namely Fallout 76 and Elder Scrolls. I’m all for a woo and a yeeeeaaahhh, but when Fallout 76 and Elder Scrolls mobile titles are getting a bigger crowd reception than Shinji Mikami, and even Keanu Reeves, it’s hard to think anything but that those cheerleaders had been slipped a few bottlecaps for that performance.