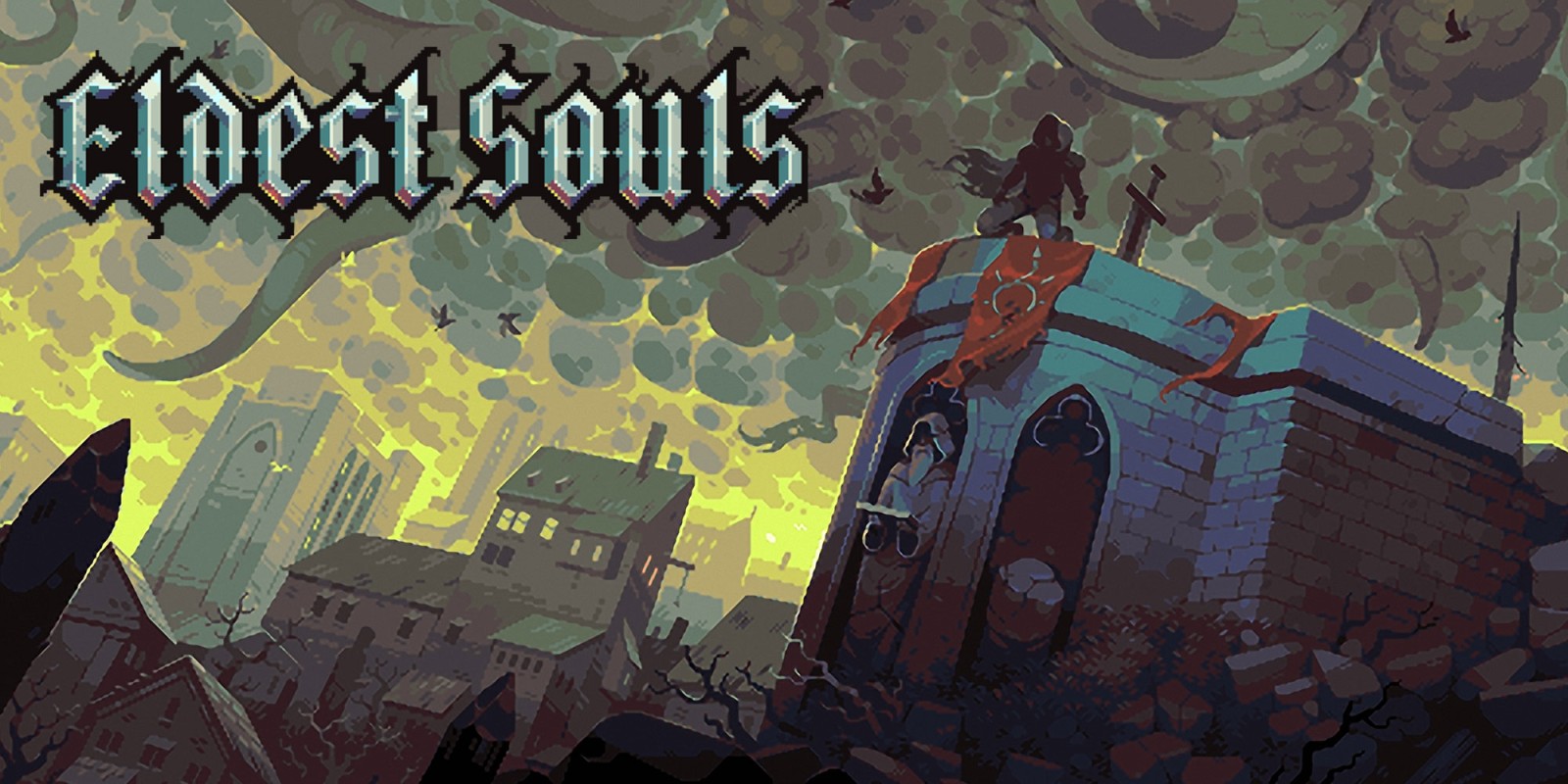 A top-down boss rush-style game with clean pixel art and a phenomenal composition, Eldest Souls has made a convert of me, and I am now on a crusade to spread the good word. Welcome to the Citadel, Crusader. If the title wasn’t obvious, the indie team of three Fallen Flag Studios has paid homage to the titles across the Soulsborne canon. As I mentioned in my preview, perhaps the greatest achievement of this breakout debut title is its ability to condense the highs and lows of the Souls games while stripping away all the grind and frustration found between the staggering boss battles.

You will die a lot, but you will immediately respawn back at the boss arena. Right back into the fray you go, little meat puppet.

Five minutes is all it takes to find yourself in the thick of things with an introductory boss that will test the mettle of all players. Wielding a great sword, players stumble into an arena against The Watchdog. As we are a lowly crusader with no special endowment or abilities, many players will have barely stepped foot on the docks of the citadel and come to grips with movement/dashing and basic/charged sword attacks before getting whooped by the towering, sword-wielding canine (Sif this is not). The benefit of this fight is that, like the Soulsborne games, it makes sure to drip-feed mechanics to the player in the first hour and test you throughout on those fundamentals.

Boss design is exceptional, making the sparse roster of nine bittersweet. Each boss is mechanically unique, frightening, and surprising, and encounters often evolve once whittling down a god to half health, a la Dark Souls 3. My favourite fight involved a god that I had read about in transcripts collected as I explored the citadel between battles. Despite testing my skills with established mechanics, upon thinking I had defeated this god (which I shan’t spoil), a new monster entered the arena and obliterated the remains of my former opponent. Now I’ve got a new, full health big bad to take care of in the same fight! Rather than feeling like punishment, this was an exciting development that once again tested my familiarity with the game’s established boss mechanics up to that point.

In a nice show of consistency, mechanics from earlier bosses will return and evolve as fights proceed. This means the final foes are a true test of all the skills learned from previous fights.

Sound is sparse between showdowns as players are immersed in this lifeless world lost to time and the corruption of imprisoned gods, but composer Sergio Ronchetti has pulled together a soundtrack so grand, energetic, and sometimes even ethereal. As your fight nears its end, the drums thump and the horns reverberate – the stakes feel so goddamn high. This humble soundtrack offers the scaled-down experience of the Souls series consistent with the rest of the game’s design nods.

The combat system appears initially rudimentary but becomes staggeringly customisable, with defeated gods dropping shards that can augment all your abilities. Abilities are the old tri-flavoured skill tree of attack, defence and utility, and the binary choices within each branch are genuinely interesting. The defence route allowed me to choose between skills that either built up a shield meter or utilised powerful counterattacks, and each path requires a fundamental commitment to a particular playstyle to succeed. Choosing counterattack skills while not knowing how to dodge properly means that you can effectively build yourself a character that you cannot play, which will happen to many players based on the game’s emphasis on experimentation with builds. Luckily skill points can be reset at any time with no penalty.

A view I most certainly killed for

While there is a brief opening tutorial and a series of help slides in the pause menu, it quickly becomes easy to feel as though you are playing the game wrong. Difficulty spikes sharply with each successive boss, and not having that gentler difficulty gradient means dozens of deaths before realising fundamental tenets of the game design that should have been a little clearer at the outset. Basic shit like the dash is primarily meant to be used to dodge towards enemies, not away from them. If you panic and dodge away from enemies, you risk temporarily depleting one of your three precious stamina charges, and when the bullet-hell enemies start, three ineffective dodges followed by a cooldown spell disaster. Stamina will recharge, though, if performing a perfect dodge. This game requires that players are aggressive and reckless, dodge towards the enemy to dish some damage, and then dash away from the inevitable area-of-attack to flick you off. Eldest Souls will spank those who play strength-only Souls builds, rewarding instead those dex users that know how to stay on an enemy’s flanks.

To maintain the offensive, this game’s clean and defined pixel art aesthetic has a colour palette that compliments the boss design. Enemies are animated in such a conservative manner that each movement and gesture is a meaningful and well-indicated telegraph. Learning each boss is a simple process that can be broken down with patience and skilful dodging.

Players can also pursue side quests by talking to an NPC. These attempt to flesh out the world and story, but are often too obfuscated by ‘Proper Nouns’, a weakness of titles attempting to mimic the Souls games’ opaque narratives with an emphasis on esoteric environmental storytelling. If you manage to find a glowy item in the world and unite it with its owner, you may also get a small leg up which I can’t spoil. In essence, though these side quests are of the simple fetching variety that provides a bonus but are forgettable and easy to ignore. It is a shame that as the credits roll, I felt no substantial connection with the world beyond the elation of my successful fights.

Spoiler: Corruption was the least of their worries

Eldest Souls achieves the limits of its ambitions, as a title that wears its namesake proudly and competently. Although its story barely registered, the experience is not one to be missed for the right player. If you are patient enough to explore the complex gameplay augmentations behind the simple skill system and are prepared to throw an ill-fitting build in the bin rather than the controller, the game is a celebration of the player’s skill and strategy. With a soundtrack that meets the scale of every fight and a visual style both functional and fantastic, this is an incredible debut achievement. 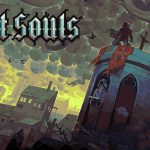 Eldest Souls Review
The Little Soul That Could
A surprisingly complex and mechanically perfect condensation of the Soulsborne experience into the boss rush genre. Eldest Souls not only joins the ranks of its genre champs Titan Souls and Furi, it defeats them.
The Good
Visual information relayed during battle is top of its class
Complete mechanical transparency and freedom to experiment with abilities rewards skilful victories
No cheap fights, all bosses are an achievement
Incredible score that channels the Souls mood
The Bad
Inability to test build viability outside of arenas means time wasted on ill-fitting skills
Esoteric narrative falls into the same pitfalls of the Souls-like genre
9
Bloody Ripper

Eldest Souls Review
The Little Soul That Could
A surprisingly complex and mechanically perfect condensation of the Soulsborne experience into the boss rush genre. Eldest Souls not only joins the ranks of its genre champs Titan Souls and Furi, it defeats them.
The Good
Visual information relayed during battle is top of its class
Complete mechanical transparency and freedom to experiment with abilities rewards skilful victories
No cheap fights, all bosses are an achievement
Incredible score that channels the Souls mood
The Bad
Inability to test build viability outside of arenas means time wasted on ill-fitting skills
Esoteric narrative falls into the same pitfalls of the Souls-like genre
9
Bloody Ripper
In this article:boss rush, Dark Souls, eldest souls, furi, Hidetaka Miyazaki, indie, pc, PlayStation, souls-like, soulsborne, switch, Titan Souls, xbox