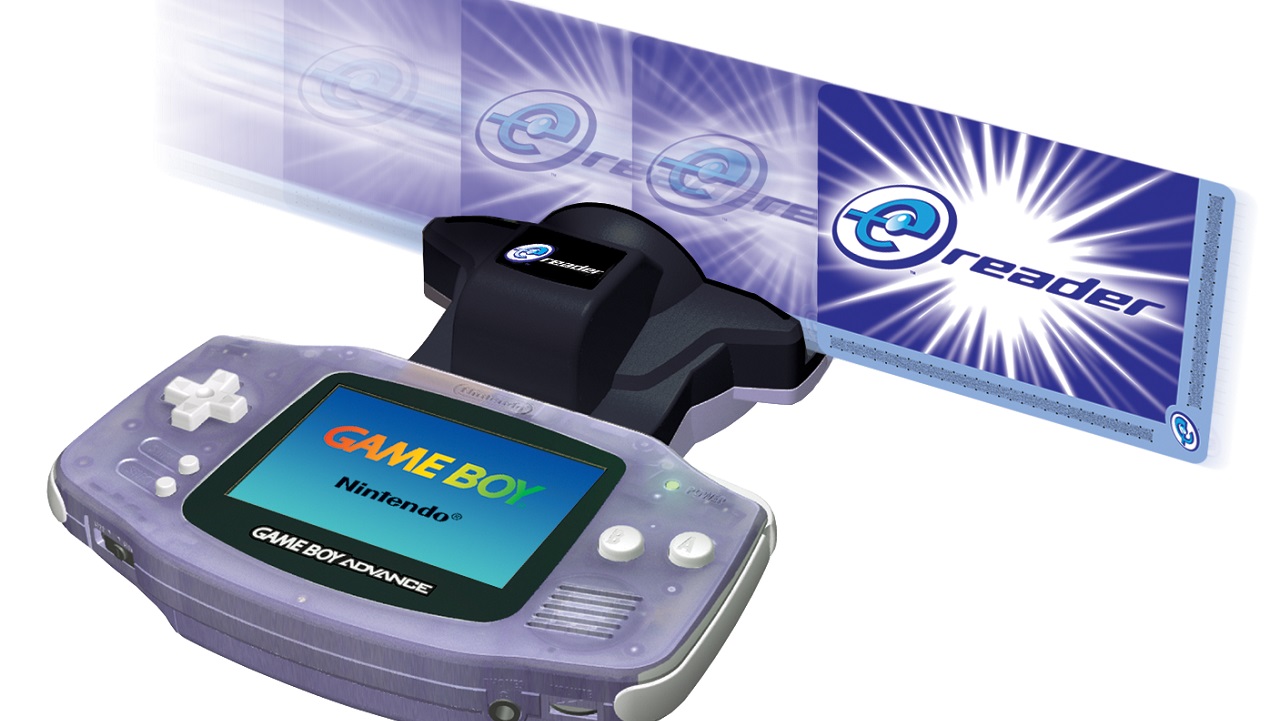 An project by newly-founded video game preservation organisation ‘Hit Save!’, in collaboration with already-existing community efforts, to preserve the catalogue of the Nintendo e-Reader is seeking donations from the public.

The e-Reader was an accessory for the Game Boy Advance that allowed users to swipe cards to add content to compatible games through a ‘dot code’: Literally thousands of tiny dots in patterns unique to each card. In Pokemon Ruby and Sapphire versions, for example, some scanned cards unlocked more trainers to do battle with. Another card for the game granted the opportunity to catch the legendary Pokemon Latios or Latias, depending on which version the card was used for. There were even cards with whole games on them!

Some games for the Nintendo Gamecube, the corporation’s home console sister to the GBA, also had corresponding cards released. These were scannable by plugging the e-Reader into a Game Boy Player adapter or a GBA linked to the console via a Link Cable.

The peripheral was discontinued in 2004, three years after its release, after a lackluster reception in North America. It remained popular in Japan throughout its life, however.

The e-Reader was light years ahead of its time: Instead of unlocking content that was already present in the GBA cartridge, the code on the cards themselves were the data. In essence, the cards were somewhat of an expansion pack; a predecessor to what we now call downloadable content. While only a handful of games boasted e-Reader functionality, the unique content they provided for them is unobtainable by other means.

So why are these cards in such dire straits today?

“e-Reader cards are especially susceptible to wear-and-tear”, explains the fundraiser’s Feburary 10th announcement, “as they are not housed inside a cartridge or a disc, both of which provide a modicum of protection from the outside world.” This leads some collectors and traders – not to mention the people who originally purchased them back in the day – to take their fragility less seriously:

You can find many e-Reader cards on auction sites today with no further protection beyond the cardboard they were printed on. Bends, scuffs, scratches, and tears are not uncommon. Coupled with the extreme rarity and price of some of these cards (some reaching prices of tens of thousands of dollars), it’s a wonder as to how much longer they’ll be around.

Many rarer cards were also unavailable for sale, being released as part of promotions or for demonstration purposes. Naturally, this makes acquiring them incredibly difficult. Most of the catalogue, thankfully, has already been accrued, but the fight isn’t quite over yet.

It’s this final stretch that’s led Hit Save! to collaborate with existing preservation efforts, including the public fundraiser. The effort’s aims are as follows, including production and shipping costs of a custom reader that allows scanning through protective sleeves and the like:

The collaboration’s current goal is 3000 USD, with 690 already raised at the time of writing. Donations are being collected until the 10th of March at just before midnight EST. You can click the link above, or here, for further details and for a Paypal donation link. If you’re a fan of this period of video game history and have a few bucks to spare, consider chucking it their way!

For more information about the e-Reader itself, you can check out the cosy and informative video below: