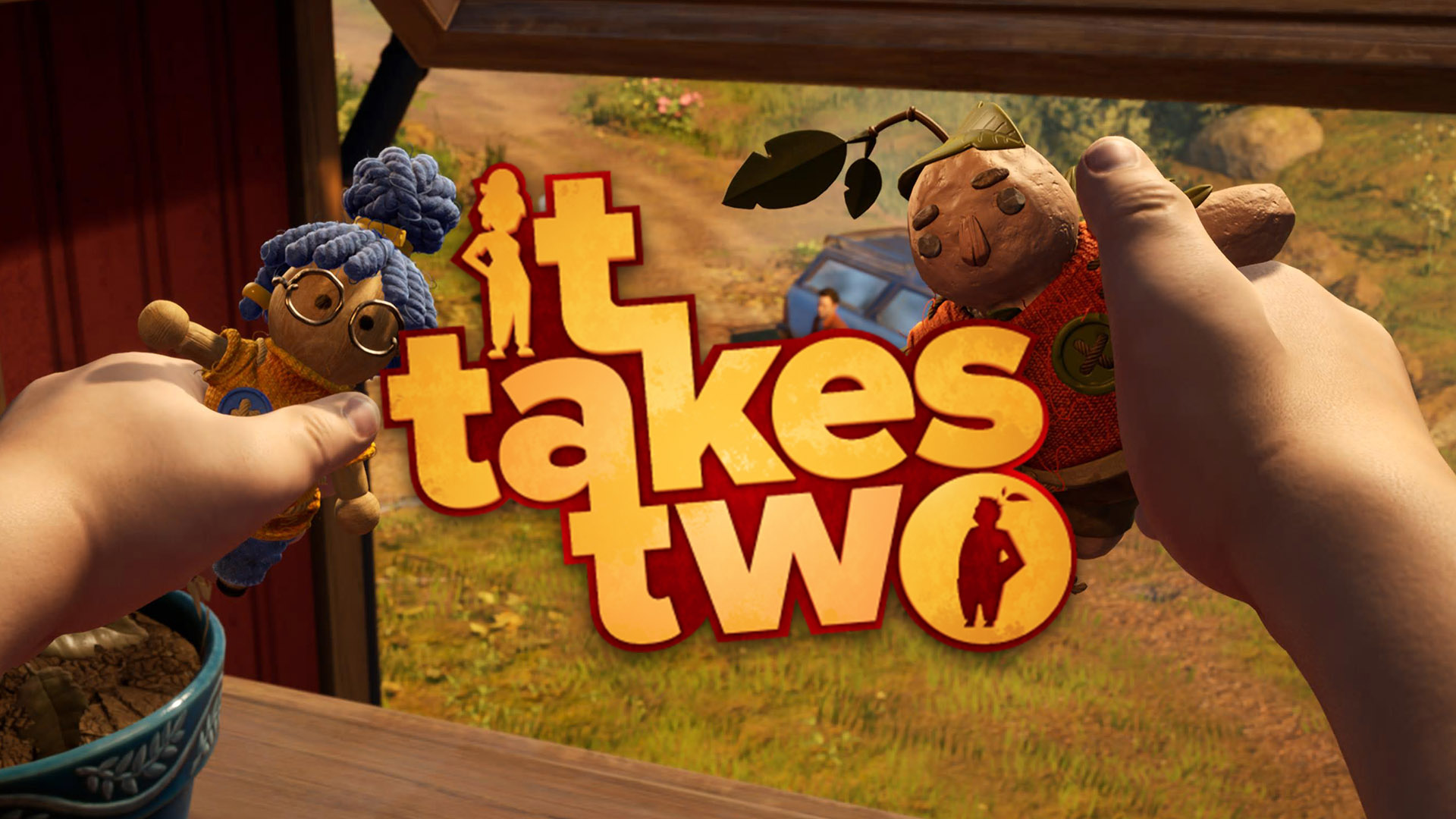 No matter who or how much you like each other, co-existing with other people is tough. There are varying degrees of give and take to navigate when sharing a space, or a life, with someone whose desires, goals and bathroom schedule won’t necessarily always line up with your own. It Takes Two is a game about what happens when two people fall out of sync, when personal aspirations lost to the daily grind become fodder for resentment and every new day sees things slip further. It’s bold to have taken this subject matter and spun it into a full-length adventure that can only be played with someone else, but it works because almost every inch of the game is the product of developer Hazelight’s passion. Passion is muy importante, a talking relationship self-help book once told me.

It Takes Two finds a straight married couple, Cody and May, at the end of their ropes and on the cusp of divorce. With May feeling overworked and isolated, and Cody underappreciated and misunderstood, the pair has decided that calling time is the best path to putting themselves and their young daughter, Rose, first. Naturally, Rose is troubled by the idea and taps into her imagination and a pair of dolls that represent her parents, a lumpy clay doll for Cody and a blue-haired wooden doll for May, as a coping mechanism. Incidentally, those dolls spring to life imbued with Cody and May’s souls after Rose hilariously consults a book on love from ‘Dr Hakim’ that absolutely wasn’t aimed at children.

What follows is a romp that sees the now-doll-sized Cody and May navigate their still-house-sized house and its surroundings in search of a way to return to their human bodies, while Dr Hakim himself – embodied in a sentient version of his book – tries to use the situation to fix the couple’s broken relationship. It’s a fun and lighthearted video game take on a romantic comedy that’s just ridiculous enough to be entertaining, though it does end with a bit of a fizzle. It could be that my expectations betrayed me after Hazelight thoroughly nailed the ending in A Way Out, but the penultimate chapter in It Takes Two feels at odds with the established narrative for at least one of the characters, and then ends rather abruptly.

That said, everything that comes before is still a great time. There are a decent number of humorous (and some shockingly dark) moments that come from the supporting cast of Dr Hakim and the various sentient household objects that the couple meets along the way. And whether or not the narrative content works for you, It Takes Two remains gripping to observe thanks to some stellar visuals and performance work. Everything from cutscenes to gameplay looks and moves like a DreamWorks film with production values to match, and the entire cast is animated and voiced to energetic perfection.

It helps too that there’s an immense amount of variety on show in both level locales and thematic elements, and the soundtrack ties it all together wonderfully. In fact, a particular chapter in the game centred around music is a clear highlight, followed closely by a lush garden stage that not-so-subtly calls Plants vs Zombies to mind. The whole thing is sharp, vibrant and fluid on next gen consoles too if you’re lucky to have one, which is no mean feat given the nature of its asynchronous split screen gameplay.

Yes, like A Way Out before it, It Takes Two’s defining feature is that it can only be played in two-player co-op, either online or off, with one player taking control of Cody and the other May. Developer Hazelight has baked this into the core of the game’s design just as before, with two very different gameplay experiences to be had that are unique to either character. A handful of on-rails and more unique sections aside, the vast majority of the game is in the form of a third-person puzzle platformer, albeit one that frequently takes its two protagonists down different paths or hands them different gameplay objectives.

It’s not as extreme in this as A Way Out’s more cinematic stylings – you’ll mostly be running in the same spaces as each other – which makes it feel a tad more traditional than I expected from the studio’s second go at this, but that ends up working to the game’s credit.

It Takes Two’s greatest triumph is that it takes a leaf or two out of the Nintendo platformer design brief. It consistently introduces new ideas and mechanics that build on the established rules of the game world in a way that makes immediate sense to the player without the need for excessive tutorialisation, and then before any gimmick has the chance to become stale it’s deftly binned in favour of a new one.

Save for a couple of stand-out bits like a sudden pivot to a top-down dungeon crawler, mostly everything works within the realms of the game’s baseline platforming controls and physics, which themselves are solid as hell. New sections of the game then typically hand Cody and May each a separate gadget or ability that work in tandem – such as a sentient hammer for May and God of War-style throw-and-recall nails for Cody, or opposite poles of a magnet each (yes, that’s not how magnets work, it’s addressed).

The result is that, the intricacies and successes of its co-op formula aside, It Takes Two is a legitimately fantastic platformer in its own right from playability to variety to level design; it’s an almost infallible take on the genre. I say almost because there are absolutely one or two sequences that feel needlessly padded out and could’ve been trimmed down without any real loss, but even those only stand out because the rest is so fucking good.

I hesitate to go into detail around any one moment in the game, but suffice it to say that there is variety on offer here. One minute you’ll be fanging explosive tree sap at cyclonic bee swarms against a backdrop of Flight of the Bumblebee, the next you’re duking it out with a squirrel atop a plane in a Street Fighter gameplay parody while the other player controls the plane. There are tons of gameplay portions that riff on other games too, including a fair few nods to previous Hazelight titles which fans will appreciate. In particular the last two chapters contain some very cool playable moments and activities that had my partner and I genuinely impressed.

Overall, playing through the game’s seven chapters should take most pairs around 10–12 hours to complete, give or take depending on each player’s platforming aptitude. It can be surprisingly challenging at times, especially in some of its bombastic (and universally pretty bloody excellent) boss encounters where teamwork and twitch reflexes must combine. The camera is also an occasional hindrance given the limited field of view afforded by the split screen, but thankfully it’s usually fairly good. That said, checkpointing is super forgiving in that if just one of you dies, they’ll respawn close enough that the other won’t really be disrupted, and even if both players fail you’re not sent back overly far.

One much-appreciated touch that It Takes Two inherits from A Way Out is understanding that when two players are forced to go through challenging situations together, especially ones where responsibilities are not necessarily equal, they’re gonna fight.

Rising tensions and heated arguments are half the fun in games like these, but that energy needs to go somewhere before it implodes, and this is remedied by the 25 competitive minigames that can be found at a very timely cadence through the game’s runtime. These games, things like slot car races, whack-a-mole and snowball fights, don’t offer any real benefit aside from the fun of finding them and the immediate catharsis of laying the smackdown on your partner, but that’s honestly a perfect use case.

The only thing missing is the ability to swap roles temporarily without exiting the game and re-assigning Cody and May. It’s not that much of a hassle, and if you’re playing locally you could technically just switch controllers momentarily, but it would’ve been a nice inclusion for those times where one player is given a gameplay mechanic that they’re not familiar or comfortable with and just need a break from a particular section.

It’s worth mentioning that purchasing It Takes Two grants access to the Friend’s Pass system, where owners of the game can invite their friends to play in online co-op without the second player needing to purchase the game themselves. The first chapter is also be playable for free to play online if two people who don’t own the game download and play together using the Friend’s Pass.

It Takes Two feels less like a game that could only work in co-op than A Way Out did, but the result is something that plays fantastically while still being far better for it. The cracking pace, hugely solid platforming and lush presentation are only slightly let down by the odd hiccup or oversight, but the overall product is something that can comfortably stand with some of the best modern platforming experiences. It’s so good I almost wish I didn’t have to share it. 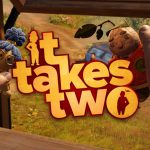 It Takes Two Review
Divorced from reality
A fun, gorgeous platforming romp that makes great use of its split screen-only twist in both gameplay and narrative. Hazelight proves that co-op lightning can definitely strike twice.
The Good
Looks and moves like a DreamWorks film
Excellent co-op puzzle platforming
Plenty of easter eggs and diversions to find
Strikes a mostly fantastic rhythm
Friend's Pass System makes for great value
The Bad
A couple instances of needless padding
Story and protagonists don't quite hit
Narrow split screen FOV can sometimes be a challenge
8.5
Get Around It

It Takes Two Review
Divorced from reality
A fun, gorgeous platforming romp that makes great use of its split screen-only twist in both gameplay and narrative. Hazelight proves that co-op lightning can definitely strike twice.
The Good
Looks and moves like a DreamWorks film
Excellent co-op puzzle platforming
Plenty of easter eggs and diversions to find
Strikes a mostly fantastic rhythm
Friend's Pass System makes for great value
The Bad
A couple instances of needless padding
Story and protagonists don't quite hit
Narrow split screen FOV can sometimes be a challenge
8.5
Get Around It
In this article:a way out, co-op, cooperative, EA, ea originals, hazelight, hazelight studios, indie, it takes two, kieron verbrugge, multiplayer, platformer, review, wellplayed