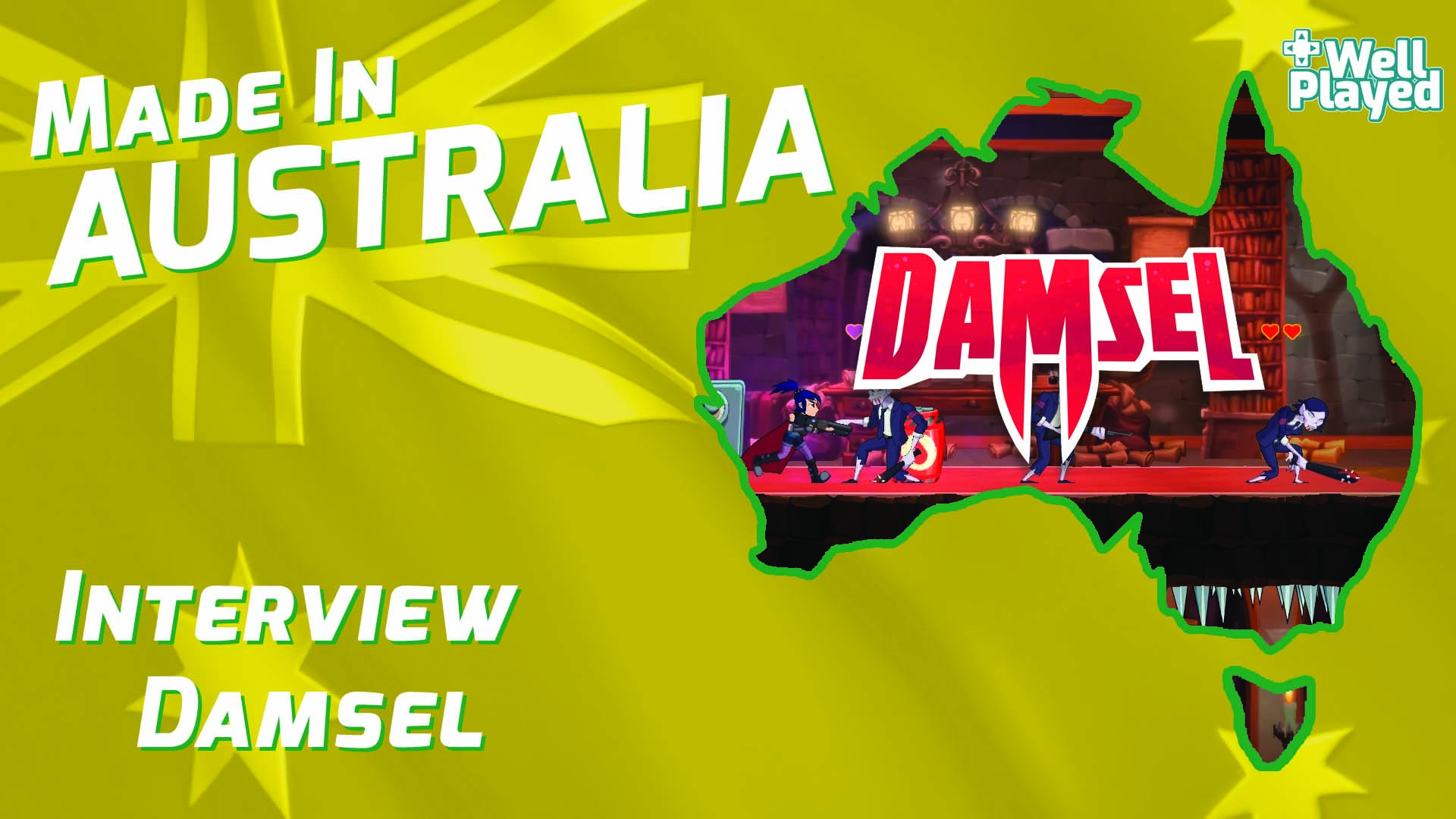 This month for Made In Australia we’re reversing the order of proceedings. Kicking things off for our October segment we’ll be chatting to our feature developer Screwtape Studios about their newly-released game Damsel (it releases today!), with an in-depth feature on the studio coming next week.

Earlier this month we sat down with Screwtape’s Co-Founder and Producer Megan Summers and she gave us the low-down on their game Damsel, which exits Early Access and releases in full today!

WellPlayed: Thank you for taking the time to chat with us today. In your own words, please explain what Damsel is all about.

Megan Summers: Damsel is an action, platformer set in a cartoon world. You play as Damsel, a secret agent for the Department of Sanguinarian Affairs, a fast and agile character.

WP: When did development of Damsel begin?

MS: Development of Damsel began 4 years ago it’s been a long road but we a very excited to be finally releasing the game

WP: Damsel is a bit of a badass. Was she inspired by any notable heroines?

MS: Not really. We spent a long time when designing Damsel looking at other female and male heroes and really tried to give her a unique look and character. Although she is described as a Buffy meets Batman hero.

WP: You released the game on Early Access in 2017, how has that helped improve development?

MS: Our time in Early Access has been more important than we thought it would be. Having an extremely enthusiastic and loyal player base from the start of Early Access meant that we were able to tweak and update the game with almost instant feedback. We also shifted to a weekly release schedule which helped us keep the game closer to the final product at all times.

WP: Why did you choose to release Damsel in Early Access? What are the boons to doing so and what do you believe the cons are?

MS: The main reason for us releasing in Early Access was wanting player feedback and we definitely got that  A con, however, is that it’s hard to leave. The feedback never stops, you could end up iterating for years. Making the decision that we were ready to release was very hard.

WP: Early Access games require a dedicated approach to a game’s community, with player feedback essential to improving the game. How involved has Screwtape been with the Damsel community?

MS: We have of course taken direct feedback from different players over the Early access period but we’ve become most involved with our community during Weekly Challenge. A set of random levels that resets weekly. It’s been really fun competing against our community each week.

WP: You tried to get additional funding via Kickstarter but were unsuccessful. How has that experience affected the game’s development?

MS: The Kickstarter experience slowed up development a small amount but it was a very interesting learning experience.

WP: How did the idea for Damsel come together?

MS: We had been working on mobile games for a number of years and knew we wanted to move to PC/console games. Anthony originally pitched to me a 2D, story-driven, linear, platformer starring a nonsexualized, funny, physically agile woman who fights vampires. It was more of a Metroidvania like game. We found great artists and a designer and began building the game from the look and style of Damsel first then to her movement. We spent a lot of time making sure her movement felt right. After building a pitch prototype we were put in touch with a publishing agent. He liked the game, the style, the story but unfortunately he couldn’t see it selling as the market for the style of game was flooded. This was a massive kick in the guts, we were running out of money and had to decide whether to pack it in or redesign and try again. We got together with the team and brainstormed how we could take the advice we had been given about the market, use as many of the assets and design elements we had already created and create something more unique. At this point the game moved from linear to arcade and we never looked back. 4 months after the redesign we launched on Steam Greenlight and were greenlit less that 2 weeks later.

WP: What inspired the art style for Damsel?

MS: The art style for Damsel was inspired by the cartoons and comics we grew up with as kids. We wanted something that was dark, but not too dark that it betrayed the fun, light-hearted nature of the setting and the tongue-in-cheek spy drama that makes the story. Our initial brief was “Dark Disney” and we took it from there.

WP: Damsel has a very cool synth-driven soundtrack. Who takes the credit for this?

MS: We were really lucky to get to work with a local Brisbane Musician, Dan Sugars. Anthony had an idea of what he wanted the music to be like and Dan more than delivered. You will be able to pick up the full original soundtrack on release.

WP: What is the difference between the three different modes, Market Research, Supply Chain Management and Executive Incentives?

MS:  Market Research, Supply Chain Management and Executive Incentives are the three Chapters of the game that will unlock after completing them for the first time. However we do have the Campaign mode and Arcade mode. In the campaign you will play through the story allowing as many attempts per level. Arcade mode will throw you into a chapter of the game with limited life to get as far through the game as possible, Arcade mode is all about the points 🙂 Damsel also has two extra gameplay style choices. For an extra challenge activate Hothead, you will have to keep your skull combo alive for the duration of the mission. If you are finding you are dying too much and just want to play through the Story then you may want to turn on Chillout. In Chillout Damsel will be hurt but not killed during gameplay, (Highscores in Arcade won’t be posted). If you feel like you’re ready to take on the Damsel community (and developers) join the Weekly Challenge, an Arcade mode run of 5 random missions.

WP: Does Damsel have an upgrade system? If so, how are upgrades earned?

MS: Damsel doesn’t upgrade, but she does gain more ability in-game if you have collected enough skulls during missions. Damsel will start lowering enemy health by Dashing through them with higher skull combos.

WP: What can players expect from the game’s final release compared to the Early Access version?

MS: The game will have changed a fair bit for people who haven’t played the game since the start of early access. The games skull combo system and Damsel’s dash mechanic have changed fundamentally, giving Damsel the ability to lower enemy health. The game’s story is told through our comic cutscenes, which brings to life Damsel, her handler, Swan and Dio-de the tech guru.

MS: Over the past few years there have been more and more female leads in games and it’s great. But it’s always great to see more.

WP: Currently Damsel has only been announced for Steam. Have you given any thought to a console release? If so which one? The Switch seems like it would be a good fit.

WP: Are you bringing Damsel to PAX Aus later this month?

MS: Yes, We will be in the PAX Rising Area again this year.

WP: You’ve taken Damsel to a number of conventions, how has the public’s reception been?

MS: We have had a great public reception. When we show the game we rarely have a moment free to get food. Its great watching people walking past our booth and they double take at the beautiful art. I think the best thing for me is the amount of young kids who are drawn to it, nothing better than watching a child beat their parents at Damsel.

WP: The Early Access version of Damsel appears to have some issues with controller support. For someone who prefers to use a controller over a keyboard and mouse, will this be resolved in the final release?

MS: Yes definitely, We are working hard to get all of the bugs ironed out before release.

WP: I notice the game has online leaderboards. Who’s the office champion?

MS: I think Anthony our Creative Director takes the prize! He is our sole programmer as well so he knows the game better than anyone.

WP: Best of luck with the game’s launch.

Damsel is available on Steam now for $19.99 USD

In this article:aussie, aussie dev, damsel, made in australia, screwtape studios