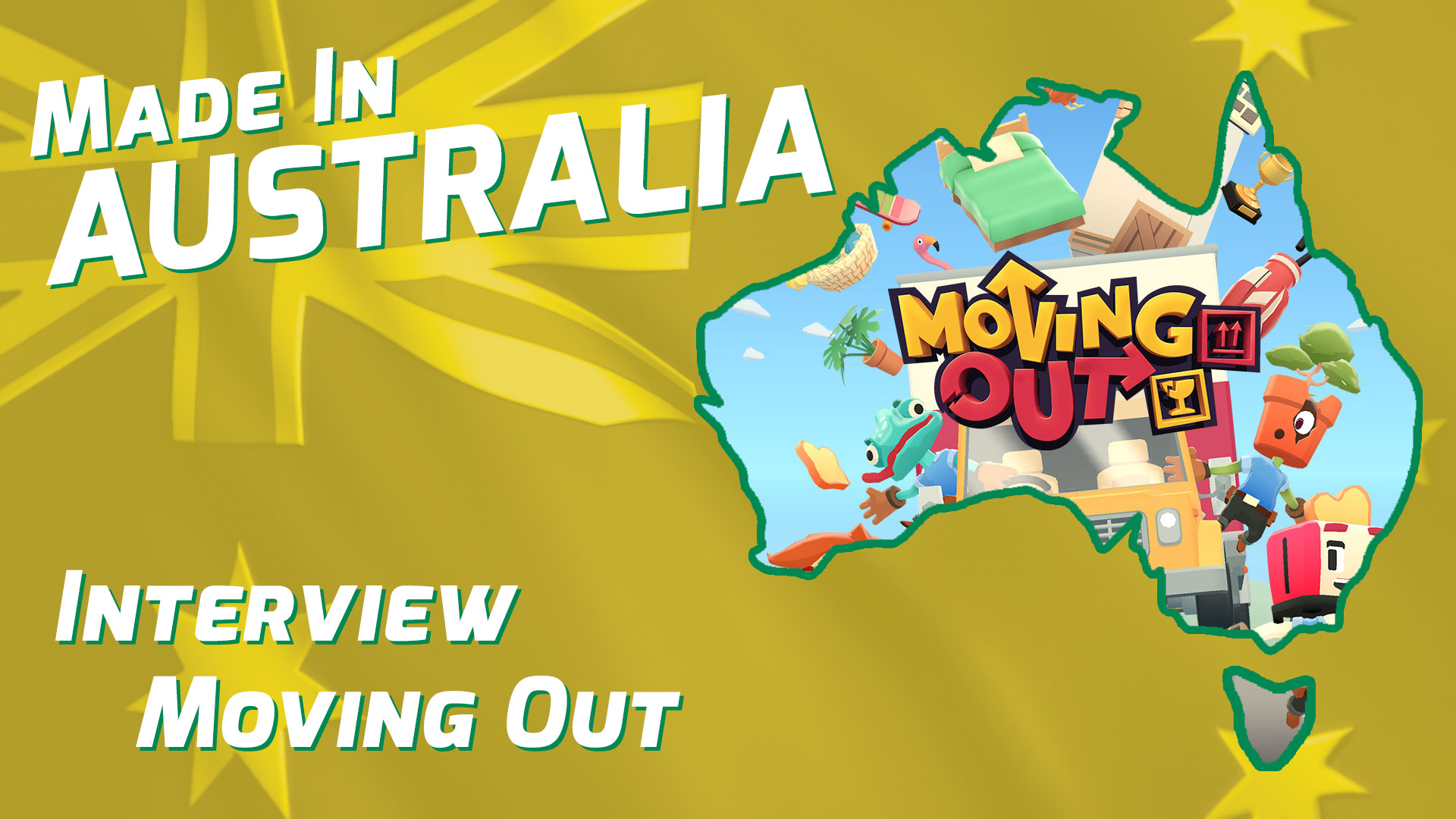 Ever since its announcment at the Kinda Funny Games Showcase in December 2018, Moving Out has been one of the games that us here at WellPlayed and many other gamers around the world have been keeping an eye on. Developed by Australian outfit SMG Studio and the Swedish-based studio DevM Games, Moving Out caught the attention of Team17, publisher of Overcooked, Worms and more, and as a result the duo became a trio, with Team17 now handling publishing duties. With the game now launching in 2020 (trust us, we’ve played it, it’s going to be worth the wait), we managed to sit down with Ash Ringrose, one of the founders and studio heads of SMG Studio and find all out about Moving Out’s history, it’s conception, partnering with Team17 and what the future holds.

WellPlayed: Thanks for taking the time to chat with us about your upcoming game Moving Out. Firstly, where did the idea for Moving Out come from and how long has it been in development for?

Ash Ringrose: It started with a prototype with Jan from DevM back in late 2016. I noticed it in March 2017 when Jan tweeted his latest prototype is growing in scope outside of what he can handle. Intrigued I reached out to know more as Jan always had interesting ideas and had been bugging him to work together on a proper game again since 2015.

The game has changed a lot in many ways but it was his original idea/vision and we’ve helped him bring it to life.

I checked my emails and I’d emailed back in Jan 2013 to do some Flash game freelance and we’d stayed in touch ever since. I only started bugging him to join the team or collab since 2015. But he’d gone to King and then done some other games solo. But I’m patient 🙂

WP: Just how much of the game was inspired by Overcooked and the success that it has had?

WP: Are you trying to do anything different with the gameplay that will separate it from Overcooked?

AR: The game plays very differently to Overcooked. Outside of the Team17 connection there is little gameplay-wise that is the same. Moving Out is much more physics and chaos based than rules and recipes. There’s multiple ways to finish a level and it’s much more accessible as moving something from A to B is easy to understand.

WP: At PAX West it was announced that you’ll be partnering with Team17 who will be publishing the game (publishers of Overcooked nonetheless). You must be excited to work with a publisher with an impressive background? How are they to work with?

AR: We couldn’t have thought up a better partner for this game. It takes a lot of stress off me personally. I’m also eager to learn, while I know a fair amount of stuff there’s still so much more to learn about the publishing, business and community management side.

WP: Is there anything that working with a publisher allows you to do that you couldn’t have done independently? Just how involved is Team17?

AR: It removes a lot of second guessing ourselves as the Team17 team is able to draw on their experience both in publishing but also game design and production. So when we have an idea we need sensed checked they can provide their opinion but also data on previous games as to what worked and didn’t. This lets us focus.

We’re about to head into console certification process and having T17 look after that side is a huge relief as it’s such a fiddly process and one slip up on a form can cost you weeks of time.

WP: How many levels are you aiming to have in the launch version of the game?

AR: We’ve locked down the level set now but have so many more ideas waiting in the wings. We have not revealed this as a final number as the list may change as we polish and tweak. But there’s “enough” to make players happy.

WP: Who comes up with the bonus challenges in each level?

AR: That’s a joint effort but it’s also a balance between fun ideas and technically feasible ones. Dave and Brodie the main level designers and Jan did the majority of the ideas for these as they know the levels inside out.

These bonus challenges provide additional ways to replay levels with set tasks. So just a little bit of fun and some hidden Easter eggs in each level. And in one particular level we have literal Easter eggs to interact with.

WP: Overcooked is known for creating testing relationships/friendships when things start to get heated (I can vouch for this). Is this part of the enjoyment in creating levels that are more challenging than others?

AR: There’s a balance we’re dealing with now with level polish as to how hard you make levels. We’re having fun creating levels that allow for funny moments to happen but also provide a challenge for people to get a Gold medal on. We don’t want there to be a hard stop for players who may not have the ability to complete so have added an Assist Mode to the game which lets you toggle various elements of the game to suit your needs.

Is that a real or stuffed giraffe? You’ll have to play to find out

WP: How much research have you done with actual moving companies? I imagine it’s hard to replicate the act of throwing a couch over a pool just right.

AR: Outside of Jan’s moving experience which was the inspiration for the game we haven’t done too much research. I was told an interesting fact from a friend in Japan who said that in Japan moving companies are highly regarded/respected as being professional and doing a good job. Which seems like the opposite to the stereotype you have here in the West. You can search Youtube for Japanese moving company and see examples of this.

WP: What are some of the biggest challenges you’ve faced during development of Moving Out?

AR: Like any game or creative product “Time”. We pushed back the release into 2020 to give our team more time to craft and polish but you can always use more time. What’s that saying, “You never finish something you just run out of time” ?

WP: How have people responded in playtesting? Do you find that different people tackle the game’s problems in different ways?

AR: We’ve done a lot of user testing where we’ve had people in and recorded their gameplay and studied that.

We have around 60+ sessions of this as video and that’s been a really useful tool for us. We also record their faces and audio with a webcam so we can hear and see how they react to the levels.

It’s also great for bug checking as can timestamp a video easily and for me I watch them back at 1.75x speed to power through a 50 min video quickly and provide notes. So makes it easier than allocating a full hour to watch people. Also people play differently when someone is “watching” them.

WP: The 80s-themed videos you’ve been using in the marketing material are excellent. Whose idea was it to utilise the power of the 80s?

Don’t let the toaster get too close to the water

WP: Given Team17’s involvement, I assume Moving Out will follow the Overcooked model and have a bunch of post-launch content?

AR: We’re so focused on launch the thought of what comes after hasn’t been locked down. All I can say is we have a lot of ideas sitting in Google docs waiting. I’d like to think we’ll be successful enough to warrant lots of updates and new content.

AR: Seeing people laugh or create their own little narrative moments in the game. We’ve set some up but it’s fun to see people take what is a simple level dressing idea and notice it and talk about.

AR: SMG recently had to move office to the current shared space at Game Plus Sydney. I had to throw out 10+ years of stuff from my previous company Soap Creative who was in the space before. I was up to 3 am multiple times just filling wheelie bins with old magazines, and tech junk. I did five runs to St Vinnies, called in GenerOZity multiple times to come pick up all the random toys and game swag we’d collected but didn’t have space for, hired an eWaste pickup, two “truck load of rubbish” pickups, and had to come to the office at all random times on the weekend to allow people from Gum Tree to pick up stuff for free. It was draining. I think at one point I had 16 wheelie bins in the office. We’d moved about 100 metres across the level but I had purge so much stuff as we had to share the space so couldn’t fill every cupboard with junk. Hot Tip: never have three storage cages because you’ll keep EVERYTHING just in case and then years later wonder why you kept the metal rigging to a 360 camera installation you did in 2007 and then struggle to dispose of it. We even had three Christmas trees!!! Why!!?!

Moving Out releases in 2020 on PS4, Xbox One, Nintendo Switch and PC.

In this article:ash ringrose, devm studios, made in australia, moving out, SMG Studio, team17, this is not overcooked, Zach Jackson