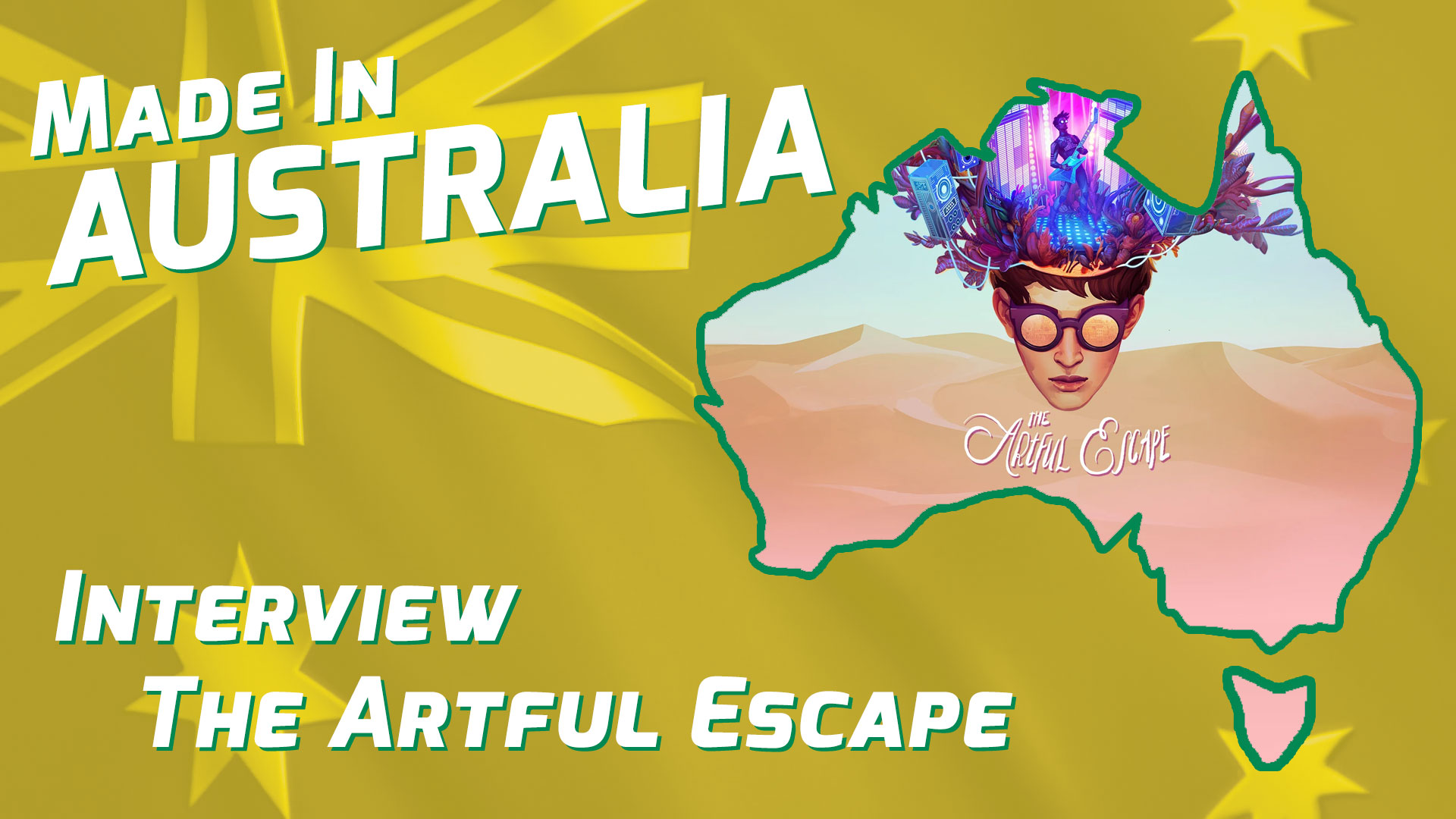 Back in 2016 at PAX Australia, Melbourne-based studio Beethoven & Dinosaur premiered its debut game The Artful Escape of Francis Vendetti, a psychedelic mix of shit-hot guitar licks (thanks Cards Against Humanity), story beats and epic monsters. More than four years later and we’re still waiting for the game’s release, although in that time the title has shortened to merely The Artful Escape. But that’s not the only thing that’s happened since then, with the studio running an unsuccessful Kickstarter, signing a publishing deal with Annapurna Interactive and the game being given the red (green) carpet treatment by Xbox. I caught up with Beethoven & Dinosaur co-founder and creative lead Johnny Galvatron to discuss what players can expect from the studio’s debut title.

WellPlayed: Firstly, tell us a bit about The Artful Escape. What kind of game is it, and how is it structured?

Johnny Galvatron: The Artful Escape is a narrative-driven, musical, cinematic platformer. It follows Francis Vendetti, a teenage guitar prodigy, as he embarks on an interdimensional journey to inspire his stage persona. Kinda like if David Bowie went on a space journey and came back as Ziggy Stardust. Francis has grown up in the epic shadow of his uncle Johnson Vendetti, the folk mastermind of a generation. With his first show approaching, Francis must deal with the demons of his lineage, his burgeoning creative voice, and the expectations of his hometown. And also Disco Worms.

WP: When did development on the game begin?

JG: I think I started working on the idea in 2016 when I was locked in my house writing a novel. Full production started in 2017.

WP: How is the game’s development going? Are you nearing the end?

JG: Dude, I hope so. Been a long journey. I still look at the game and cannot believe how far it’s come.

WP: What inspired the setting of The Artful Escape and the game’s art style?

JG: I think the art style and themes come from my own path across the world of rock ‘n’ roll, from being a hopeless fan in my teens to being the one on stage in my 20s. Music has always been a realm of fantasy for me. From lyrics, lighting, performance, to the satellite aspects of creative content that orbits the music; the film clips, album artwork, concert posters, rock operas. I tended to lean towards the more theatrical, the outlandish and the well crafted. I thoroughly hated my own experience in the music industry and it was the aura of fantasy that stayed with me, not the cruel reality of touring.

Francis Vendetti, this is your life

WP: With the game centred around Francis trying to live up to his old man’s legacy, what feelings are you hoping to evoke in people playing The Artful Escape?

JG: One of the game’s themes is that of stage personas, how they can be used and, importantly, what they allow you to leave behind. I hope players can feel the weight of legacy heaped on Francis Vendetti, and experience the freedom of becoming someone else, and all the possibilities that come with letting your mind wander away.

WP: The game was initially titled The Artful Escape of Francis Vendetti before it was shortened. What was the reason for this?

JG: All those boring reasons; name recognition, branding, web addresses, stuff like that. Honestly it didn’t bother me.

WP: Has much changed between the trailer you released at E3 2017 and the game’s more recent showings?

JG: A ton. Initially I was doing all the illustration, animation, level design, music etc. Now I’m lucky enough to have a heinous team working on the art-side of the game.  Tess Monash on Technical animation, Arden Beckwith Illustrating, Mikey McCusker on 3D modelling, Harry Truman (not the president) on level art. The game is far grander in scope. Working with such talented artists has elevated the game to a level I could never have hoped for. Our programming team of Sean Slevin, Justin Blackwell, and Jack Knobel have rewritten every system of the game, our dialogue systems, movement systems etc. Their artistry blows my mind.

WP: How much of the game has been influenced by your time in The Galvatrons?

JG: It’s more of a raging against my time in the Galvatrons. I got to really live the dream with my time in the band but I found the experience horrible, generally. I don’t like touring. And I saw how the sausage was made, as they say. I much preferred my imagined version of fame and the music industry. There’s a little bit of that in the Artful Escape.

WP: Were you the primary supplier of the game’s guitar lick samples?

JG: Hell no. The shredding comes from Edan Altman, a Melbourne musician. He can wail. I met him through Josh Abrahams who is my long time musical partner and who has worked with me on every step of the game. He wrote the song Addicted to Bass. I don’t know if that was big where you are but I like to include it in every interview and then tell him about it.

Colourful backdrops, musical monster and dope guitar licks, what more could you want?

WP: With gameplay so intrinsically tied to music, what comes first when designing levels?

JG: A general theme. There’s a snow world called the HelioTromms. It’s a night-time, glimmering world of ice, snow, mountains, amusement park rides and existential journeys. I wanted to go with a cinematic, orchestral Stravinsky-Firebird-Suite kind of grandeur mixed with Valhalla verbed guitars squealing in the foreground. That inspires vast bridges over crevasses, the peaks of mountains, sprinting beneath the hooves of creatures whose size is unfathomable. And the levels, or at least the general ideas, bloom from there.

WP: Where would you say the challenge in the game comes from? The platforming, puzzle-solving or something else?

JG: We approached gameplay with a more musical method than a traditional video game method. The most fun songs to play are not the most complicated. Smells Like Teen Spirit makes you feel like a force of nature but it’s not difficult to play. Its enjoyment does not come from its virtuosity or its complexity, it comes from the crescendo of its elements, its extreme dynamics, and its general typhoon-ness. That’s how we approached gameplay, not to be difficult – but to be powerful.

WP: Is there any kind of combat or conflict in the game?

JG: No but you can jam with enormous monsters.

WP: We’ve seen Francis wield a spectral guitar in trailers, can he play anything else?

WP: How long can we expect the game to be?

JG: Depending on how long you spend in the game’s customisation areas, four to five hours.

WP: We know the game is coming to PC, Xbox One (we assume Series X/S) and Apple Arcade – why those platforms specifically and will it eventually expand?

JG: Don’t think I’m allowed to talk about that stuff.

WP: Can you give us any sneaky hint at when the game will release?

WP: Thank you for your time. Good luck with the rest of the game’s development.

JG: Thanks for having me!

In this article:made in australia, made in melbourne, the artful escape