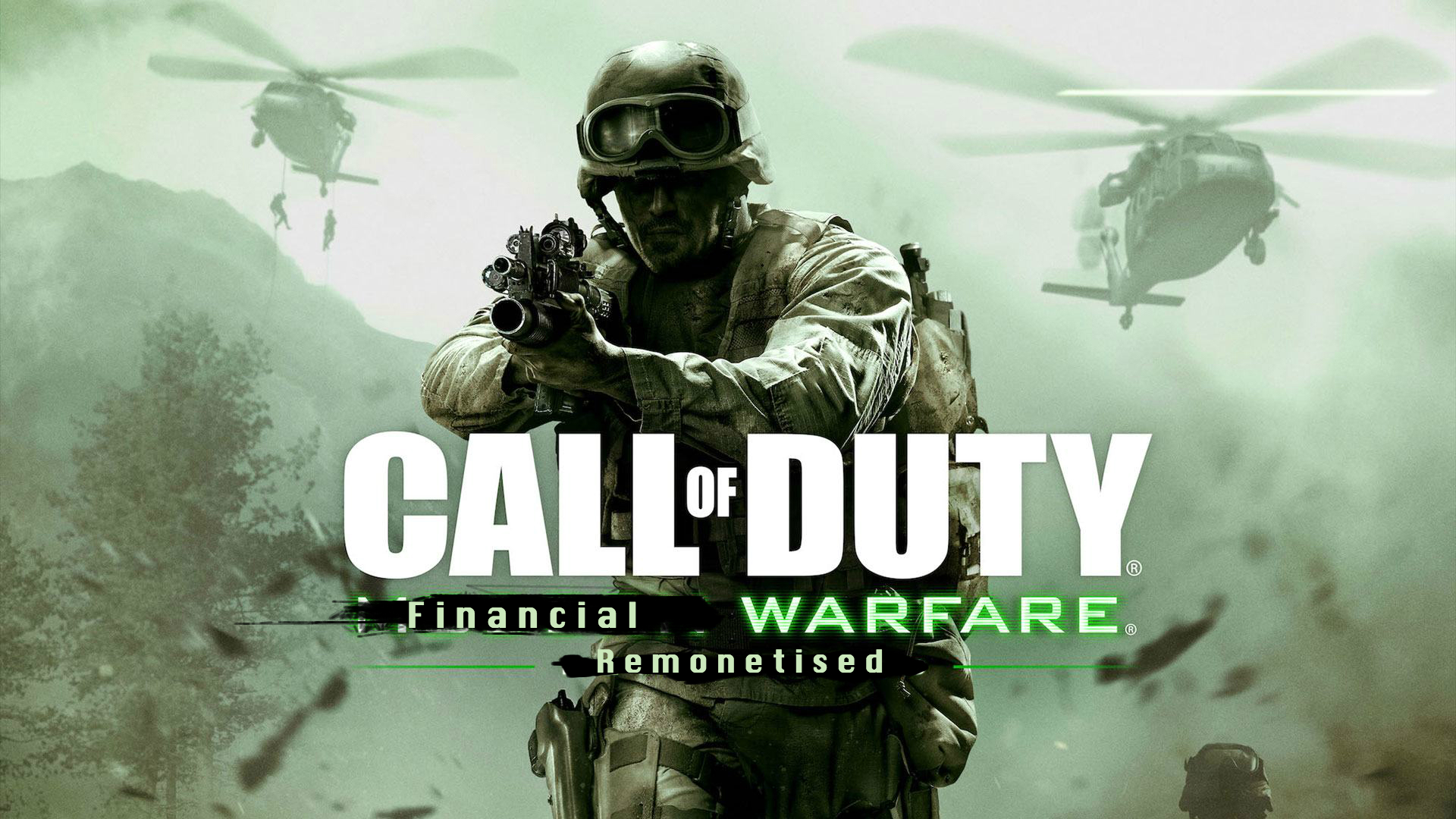 Recently Activision announced that they would be releasing Call of Duty: Modern Warfare Remastered as a standalone product (for a whopping $70). This announcement has received a mostly negative response from the gaming community, thanks to Activision’s absurd pricing of their (almost) ten-year-old title (nine years when IW and MWR released side-by-side last year).  Modern Warfare, whether you like it or not, was one of the most influential games for the first-person shooter genre. It boldly left the World War II setting and instead adopted the then more untapped setting of modern day war. It was so bloody successful that the game got two sequels and the series as a whole became progressively more futuristic, for better or for worse.

To mark the nine-year anniversary of the game itself, Activision thought it to be a good idea to give fans what they wanted, a remastered version. However, Activision ridiculously decided to hold both the fans and the remaster to ransom by tying it to an exorbitantly expensive edition of last year’s Call of Duty: Infinite Warfare. I’ll be the first to admit that I thoroughly enjoyed Infinite Warfare. The campaign had nuance, the level design was excellent and remained focused and fresh thanks to mechanics which added depth. I also enjoyed the Zombies mode which the game offered, however I did refrain from touching the multiplayer (I find Call of Duty multiplayer to be a cesspool of P2P connection issues and prepubescents bragging about their junk). However, Activision’s move to hold this remaster ransom to people willing to pay at least $130 was one of the most contemptuous things that I have seen a publisher ever do.

This is where I learned how to 360 no scope

Activision have always been known for their shady money-making tactics, primarily known for their egregious abuse of the season pass system by charging $65 every year for the Call of Duty games – a price that I would say is consistently unjustified. They are also largely responsible for the disappointing state that Destiny launched in, with the game essentially being scrapped and rebuilt a year from release. It’s a marvel that it wasn’t even barer in terms of content. Destiny is another perfect example of Activision’s ridiculous pricing model. $40 for an expansion pass that didn’t offer much, $70 for a single expansion (admittedly it was a great expansion) and $45 for the final expansion. $155 in DLC with an average of $38.75 per expansion. To add financial insult to economic injury, for The Taken King to be playable you needed both previous *minor* expansions that were offered on the expansion pass which were not included in the $70 price tag. It wasn’t until a few months after TTK had launched that the previous expansions came bundled with it. The same scheme was repeated for Rise of Iron, requiring The Taken King to be playable (at which point TTK had received over a 50% price cut to the reasonable price of $30). Now, people will just brush it off and say “that’s just Activision for you,” but this was apparently just the beginning of their antics.

Fans of the original Modern Warfare were understandably pissed off when it came to light that to even launch Modern Warfare Remastered you would need Infinite Warfare, digitally or physically depending on how you bought it. But the ones who didn’t buy into this were the lucky ones. People who did buy the Legacy or Legacy Pro editions of Infinite Warfare (unfortunately I fall into this category too) were treated to a game with gameplay that had not aged well. Anyone that tries to tell you it aged well is having a laugh and it is your duty to slap some sense into them. The general consensus is that Call of Duty hasn’t changed much since it really hit its stride in 2007, but the gameplay has seen vast improvements since then, becoming smoother and more responsive with every iteration. Now let’s assume you could buy Infinite Warfare for $70 by itself on launch day, that means that to get Modern Warfare Remastered you would have to cough up another $60. $60 for a nine-year-old game is a lot, and it really brings up my issue with a majority of remasters (add another $10 for the standalone release).

But I digress, if you load up MWR and navigate your way to the multiplayer part of the game, you will notice that there are cosmetic microtransactions. If you ask me it is NEVER okay to put microtransactions into a premium game (basically any game you pay for). The whole reason free-to-play games implement microtransactions is because there is no immediate price of admission. You aren’t paying for the game directly but the developers have to make up the money somehow. Pretty much all F2P games are built around the microtransactions they come up with, usually boosters and currency to help bypass time-gating.

Nothing suspicious about a bush running around in a building

Games that have a price of admission should never feature microtransactions because you have already paid for the game and the whole “they’re only optional” excuse doesn’t really stand either. I get that developers need to make money, they are businesses after all, but microtransactions aren’t the way to do it. Microtransactions are designed to beat you down over and over again until you give in and let them drain your bank account; it’s evident in Grand Theft Auto V, Overwatch and Call of Duty. But putting microtransactions into a game that people had to pay extra for is even worse. You’re putting an entire game behind an extra paywall and then telling the players that gave into your scheme that they need to give you more money.

Most remasters of modern games are sold as complete experiences. Alongside blowing the dust off the old game and applying some polish to the visuals, these remasters usually come packed with any and all DLC that was added to the game. Dark Souls II: Scholar of the First Sin did this, Skyrim: Special Edition did this and BioShock: The Collection did this. This is where Modern Warfare Remastered differs from the rest. Modern Warfare was packed with absolutely no DLC at all. Instead, Activision are forcing players to part with more of their hard-earned money ($20.45 to be exact) for some revamped maps from the original game; surely it comes to a point where enough is enough. It wasn’t enough that you forced players to buy Infinite Warfare in order to own MWR on launch, but now when you release the product as a standalone product I need to pay even MORE for content that should have come of the game as standard. This, by far, is a new low for the gaming industry. I already find a majority of remasters to be cheap cash grabs, with some of them being well done like the WipEout: Omega Collection, which recently released for the PS4 (three games for $54.95), or the upcoming Crash Bandicoot trilogy. It makes me wonder how long it’ll be until the other publishers start making more ‘business’ decisions like this. Remasters have been a part of this generation from day one, and as the generation has gone on they have been egregiously exploited. I sort of understood it at the beginning to help alleviate that part of a new console generation where there’s nearly nothing to play, but four years of it is a bit ridiculous in my opinion.

Now there are a couple reasons as to why I am talking about this now and not when this stuff originally came to light. Firstly, I didn’t really think that Activision would pull anything more than they already had with the remaster, and even by their standards how they are handling the pricing and content is low. The costs of remasters should never be the same as a brand new release, especially seeing as the development cost of a remaster is infinitesimally smaller than the costs of developing a new game. I believe that people really need to be aware of the ridiculous means that Activision have gone to in order to get as much revenue from you as possible. I wouldn’t normally do this, as what you do with your money is your business, but I urge people not to buy MWR to show the Activisions of this world that we aren’t ok with this. Sure, we like the nostalgia of playing old games that we cherished in our younger years, but don’t bend us over a barrel because of it. Companies remastering classics is only going to continue, however, treat your fans with respect and not just like walking dollar signs. Price your remasters favourably and include ALL content from the start. If we allow Activision to get away with this then the trends will only continue to get worse and worse. I know chances are my argument will do nothing, but perhaps maybe I can convince at least one person to reconsider throwing their money towards a company that repeatedly squashes any integrity this industry has left.