There’s a particular genre, or subgenre, of gaming that’s been steadily gaining traction over the last few years. It’s one that I’ve taken to calling ‘chaotic co-op sims’, and it’s seen a surge in popularity off of the backs of games like Overcooked. These are games designed to incite arguments as much as encourage teamwork, while mixing parodies of real-life, high-pressure jobs with silly physics and revelling in the mayhem that ensues. While there have been plenty of recent takes on the idea, most of which pile on the silly in the hopes of achieving maximum streaming exposure, a new challenger from Australia’s own SMG Studio seeks to take things in the opposite direction and provide a more relaxed and accessible co-operative job simulator.

As much as I’d like to avoid making the comparison to Overcooked too much, Moving Out wears its influences on its sleeve. The top-down, heavily stylised representation of an otherwise mundane job being performed by wacky (and highly customisable) characters with little regard to health and safety isn’t a new idea. That’s the last comparison I’ll make though, because while it’s easy to draw them, Moving Out is assuredly its own game with a unique angle that deserves to be taken on its own merit.

For starters, this isn’t the kind of chaotic co-op game to make you want to throat-punch your housemates or significant others after repeated screw-ups. Moving Out is a decidedly more gentle experience, trading the pressure of failure for the aspiration of success. Each of Moving Out’s 30 levels presents a gradually climbing challenge, sure, but bare minimum is the benchmark and anything above and beyond is gravy. The goal is always the same – your team of one-to-four Furniture Arrangement and Relocation Technicians (or F.A.R.T.s) enters a property with the goal of moving a chosen assortment of objects into the truck in as little time as possible.

The challenge mostly comes from the same places as it does in real moving; how can I take all of these boxes in the fewest number of trips? How do I get this L-shaped lounge through the doorway? The solutions though are anything but typical. Nobody’s going to complain if you bash that couch against every wall in the house on your way outside. Hell, got a ton of boxes on the second floor? Just toss those bad boys through the window! Bonus points if they land straight in the truck. The pursuit of clever and terribly unprofessional shortcuts is where most of the fun in Moving Out lies. In that way it’s actually a lot closer to the real profession than expected, now that I think about it. You’ll never achieve those elusive Gold times by doing things the proper way, so satisfaction comes from developing better and more efficient methods of moving things from A to B, often to the detriment of whatever poor client decided to hire Smooth Moves for their shift.

It probably goes without saying, but Moving Out is an infinitely better experience when played with others. If you’re currently in lockdown alone and don’t have anyone to play with, fuhgeddaboutit. If you’ve got housemates keen for a bit of casual couch gaming though, you’re on. Doubly so if you’re looking to play something with the family or younger kids, as Moving Out comes loaded with a fantastic suite of accessibility options that help to tailor the experience to a wide range of skill sets. It starts with simple things, like being able to adjust the size of UI elements and swap fancy fontwork for something more dyslexic-friendly, and extends to a deeper suite of options under the banner of Assist Mode.

An entirely optional way to experience the game, Assist Mode allows players to tweak the game to be more accommodating, with options like increasing level time limits, making two-person-lift objects light enough to be carried solo, and the ability to skip levels upon failing them. The most commendable thing about Assist Mode, aside from making it easier for less capable players to enjoy the game, is that there are no penalties for using it. Every level and bonus challenge, every trophy and achievement, all of it is just as available to someone playing with every assist switched on as it is to someone playing without. I could enjoy the challenge with my equally-skilled partner and then dial things down for my younger brother and still progress all the same. Accessibility and inclusivity are (rightly) on the forefront of innovation in the gaming space and so it’s nice to see an example where it’s less of a concession or a cheap way to play and more of a baked-in aspect of the design.

If you are looking for a challenge though, you’ll find Moving Out’s in the form of a plethora of bonus objectives and extra levels that push both lateral thinking and raw skill further than the vanilla targets. The bonus objectives typically ask players to complete levels under stricter conditions, like not breaking any windows or only using certain doors, but they can also veer into more obscure and puzzle-solve-y territory with objective titles like ‘Give a bird a bath’. Finishing these earns coins that unlock Arcade levels, which take place in a VR-like space and feel almost like the pipe missions in Super Mario Odyssey with their quickfire platforming challenges. There are also VHS Superstore levels, which are unlocked by scoring Gold times in main levels and are even more experimental than the Arcade, often not even tasking players with a goal other than messing around with conceptual ideas that never made it into the game proper. They’re a weird but interesting look into the kinds of content that often gets cut from games and I kinda dig that they’re in here.

With so many ways to play and so much potential for casual couch co-op, the biggest complaint that I can realistically level at Moving Out is that at the end of the day it’s maybe just a little… toothless? Though that runs counter to a lot of the praises I’ve been singing thus far, there is definitely an edge that’s present in similar games that I missed while playing this one. A lot of it comes down to the fact that levels and their objectives are always the same, meaning there’s no element of surprise in replaying them, aside from the always-messy challenge of properly stacking the truck (never let Zach Jackson do that job). That feeling of repetition isn’t helped by the music either, which is appropriately 80s-cheesy but far from memorable and not nearly as effective as the laugh-out-loud dialogue and sight gags that permeate the rest of the game. As much as I love the more relaxed pace and friendly attitude, the trade-off is that I’m less inclined to keep coming back for more.

Moving Out makes for a compelling addition to anyone’s library of games to bust out at the next party or game night (feels weird to suggest that in the current climate, but hey). It’s an inviting, inclusive and hilarious take on chaotic co-op that makes a commendable grab for the Overcooked crown. A creeping feeling of repetition sets in too quickly for that to happen though, taking some of the edge off of repeated sessions. The lack of online multiplayer stings, too. Still, it’s a game that’s perfect for playing through over a weekend with friends or family even if it doesn’t make it into permanent rotation, and the fact that it’s a product of our local development scene in Australia is something to be proud of. 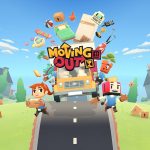