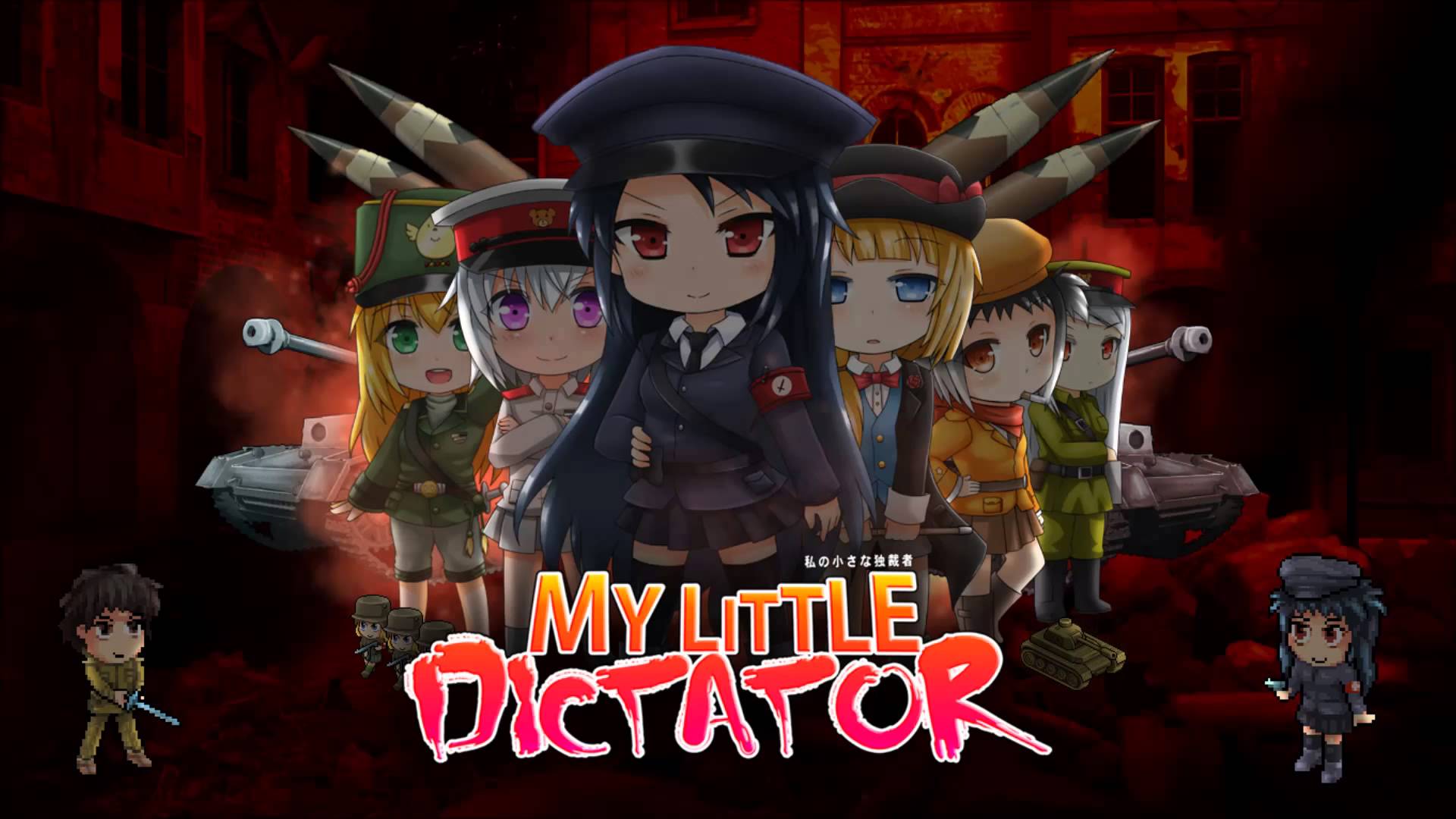 ‘A satirical, alt-history World War 2 visual novel that depicts the world leaders of the time as anime girl stereotypes leading their armies into turn-based, Pokémon-style battles’ may be the best sentence I have written this year. Welcome to My Little Dictator. This here is an unusual review, even by WellPlayed standards.

As is par the course for many trope-heavy VN titles, players assume the role of a rather gullible Japanese manchild. Ours is named Yamato Yamamoto. A celebrated warrant officer of the Zipanguese (read: Japanese) army, he is sent to Germany on a diplomatic exchange of military minds mere days before strife erupts with Poland. Immediately after being exposed to the volatile nationalism brewing within Germania’s capital of Altberlin, Yamato is thrust into the private inner circle of the nation’s dictator and her trusted cabinet of ditzy waifu clichés. His secret mission: to assassinate Germania’s Füühbar.

She’s wearing a mini skirt and uniform. Long black hair and red eyes. God, she’s cute. Her name is Adorofia Hitora, leader of Germania. To you, it’s Adolf Hitler. As expected, plans go awry and Yamato becomes the object of Hitora’s yandere desires, despite an endless series of failed assassination attempts. Along the way, Yamato is positioned as Germania’s leading tactician. Between sending battalions of absurdly named Panzer tanks into neighbouring territory, he will also have the pleasure of being effortlessly embroiled in the love interests of the many European lolita-fied leaders of the 1940s. From Losefina Starin to Winstefina Churchill…you get the picture.

Surprisingly, these rather pathetic engagements of romantic interest while Europe burns are funnier and more endearing than they have any right to be. The writing here is best compared to the romantic satire of 2014’s hilariously avian Hatoful Boyfriend, where the self-aware writing succeeds its absurd premise without resorting to obvious and hackneyed humour. My Little Dictator also has its share of chatty birds and various other borderline furries in positions of military authority, so there’s that too.

The best moments of My Little Dictator take place in between the conflict operations, where the world and characters are given ample time to develop. Over the course of my 50 hours to reach the first of many endings, the story struck a surprisingly engaging pace while juggling an epic scope – from establishing the state of the world as it moves from the leadup to Germany’s invasion of Poland, to the geopolitical and militarised reactions of neighbouring countries, and finally all-out war. The paradoxically whimsical writing is at its best in the moments between fighting, where negotiations are considered and these little women bring their over-inflated egos to the fore.

The writing is not without its issues, particularly with regards to how this fictionalised retelling of history separates itself from the irredeemable horror of WW2. Countries, characters, armaments, and vehicles are all given pseudonyms that range from the familiar to the funny, to the unfathomable. In the midgame, when various nations are engaged in conflict, the visual novel does a poor job of indicating to the player the importance of a given alias. Countries lose their significance to all but the most eagle-eyed modern historian. War crimes are largely omitted entirely and atrocities are merely a quirk on the conscience of the given leader. Minor nations become footnotes and the writing can feel forced due to the all-encompassing scope captured in this oddball retelling. My eyes glazed over at the war’s halfway point, particularly when combat scenarios would interrupt every few minutes of reading.

The visually Pokémon-styled turn-based combat is ultimately the torpedo that sinks this otherwise competent submarine, however there is charm in the little pixellated female soldiers manning vehicles of warfare such as ponies-on-sticks, tossing stale baguettes at the enemy and finally obliterating the opponent with their given nations’ anthem. Fights start with the player being able to select from an assortment of units that have an associated cost in order to compose their team. The available command points for these units are reset each fight, and increase with each win, meaning potentially more and better units for your team composition in the next fight. Some grinding is also allowed, with side missions on offer to boost the command point pool.

However, these fights have barely any strategy and quickly become formulaic. Units have unusually assigned levels such as 20 or 43, given to players with no indication of their value, as it is not associated with the cost. A level 50 tank could be markedly cheaper than a level 42. Units do not increase in level and there is no EXP gain. Players get no agency or indication about what units will become available in future scenarios. Fights largely come down to selecting whichever ability does the most damage, and spamming it three or four times until the enemy is knocked out and the next poke-soldier is sent in. Damningly, there is no tactical information given in a fight. An offensive ability will read as ‘not effective’ on round one, and ‘super effective’ on round two, with the same units in play. Worse still is the fact that any ability, including heals, will fail to activate with absolutely no indication. This is called a ‘misfire’. It is common and there is no predicting it. Misfires can and often will happen on any and every action of a fight.

Frustrating and shallow as the combat may be, the best way to play My Little Dictator is on its easy difficulty. This allows players to skip battles, at the cost of a handful of achievements. The benefit here is that combat unnecessarily disrupts the telling of the story, which has all manner of twists involving the undead, mechs, and cute romantic subplots that sucked me in. Ironically, the review score for this game would have been reasonably higher with the omission of this visual novel’s ‘gameplay’ found in its combat, whereas most VNs are limited to a select few decisions in an otherwise linear and text-heavy story.

Depending on where you sit on the Venn diagram between appreciating borderline rule 34’d Hitler, modern military history, and visual novels — My Little Dictator may be a hard sell. While it is hard to find redeeming value in the monotonous turn-based battles, the writing is surprisingly humorous and revels in the details of its World War 2 satire. If you somehow fit into the extremely narrow target audience, there are over 50 hours of oddball loving on offer. 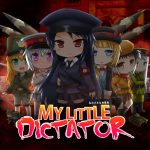 My Little Dictator Review
Honey, I Shrank The Fascists
For the small audience looking for a romantic World War 2 satire featuring a harem of loli leaders, My Little Dictator will entertain for dozens of hours. Just skip the combat.
The Good
Satirical, oddly whimsical writing
Epic scope
Paradoxically endearing war criminals
The Bad
Shallow combat is a tedious crapshoot
Substituted aliases in the writing are often clunky
Plot becomes a vague blur in the midsection when combat is prioritised
6.5
Has A Crack

My Little Dictator Review
Honey, I Shrank The Fascists
For the small audience looking for a romantic World War 2 satire featuring a harem of loli leaders, My Little Dictator will entertain for dozens of hours. Just skip the combat.
The Good
Satirical, oddly whimsical writing
Epic scope
Paradoxically endearing war criminals
The Bad
Shallow combat is a tedious crapshoot
Substituted aliases in the writing are often clunky
Plot becomes a vague blur in the midsection when combat is prioritised
6.5
Has A Crack
In this article:churchill, GOTY, my little dictator, Nathan Hennessy, Romance, rule 34, satire, visual novel, waifu, world war 2, ww2