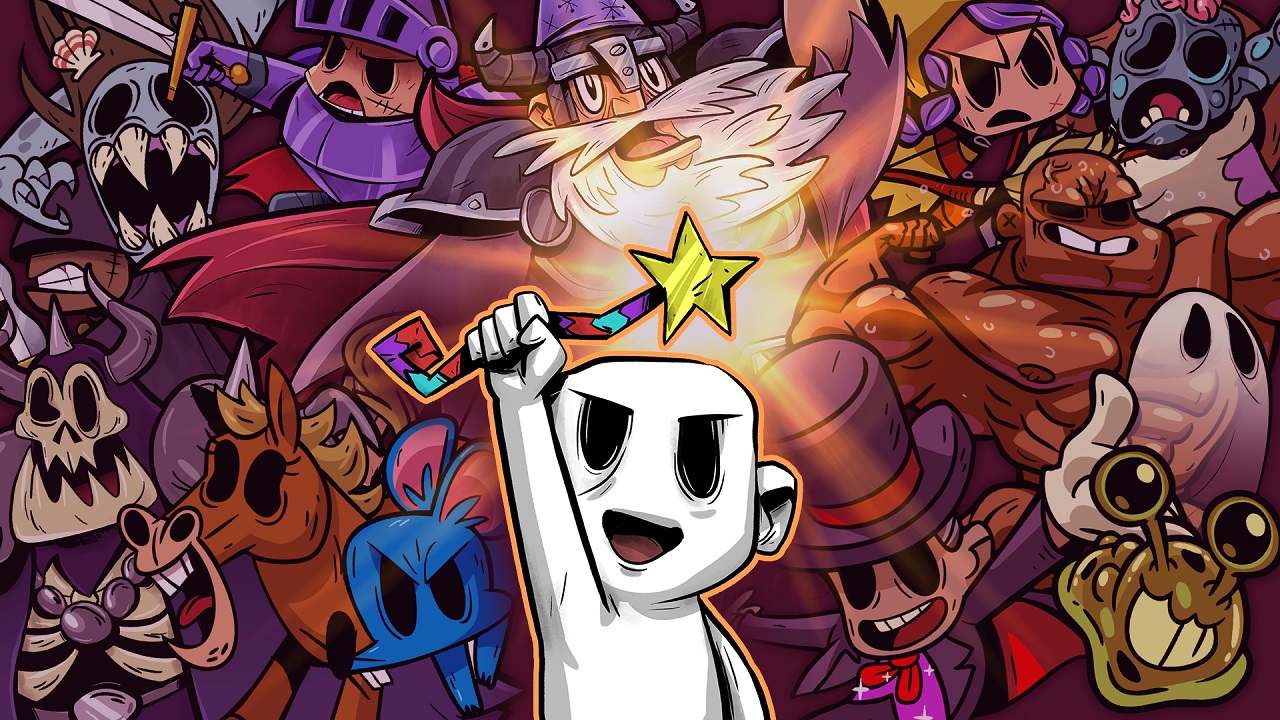 Having already mastered the Metroidvania with the successful Guacamelee series, Canadian outfit Drinkbox Studios are back to tackle a new genre with their signature cartoonish flair, the humble action RPG. Question is, can Nobody Saves The World recapture the same enjoyment levels of its predecessor’s gloriously enjoyable action? Why yes, yes it can.

Nobody, a ghostly humanoid child, awakes one morning with amnesia only to discover the great magician Nostramagus has vanished while the deadly Calamity has returned to spread darkness and despair across the land. Following a brief misunderstanding that throws Nobody into a basement, the future saviour of the world (apparently) comes across a magic wand that imbues the otherwise weak child with the ability to transform into a myriad of powerful and sneaky forms.

One punch, you say? Hmm…

As with Guacamelee, Nobody Saves The World sells itself on its outlandish character designs and colourful world, but dig a little deeper after a few hours and you’ll discover a clever handful of mechanics that set it apart from the rest of the pack, none more important than the various characters Nobody can transform into. From the typical soldier and archer types to the completely outlandish bodybuilder and, yes, a zombie, there’s a good assortment of character types that each bring with them unique abilities and buffs that can make the difference between clearing out a dungeon with ease or slipping into an early grave.

What’s even more clever, however, is the ability to tailor each character to your own likeness. Each form has a small selection of secondary attacks or passive abilities that can be modded between each form. For example, the first class you unlock is a humble rat who can munch his way through enemies by adding poison to each attack. That same ability can be modded to any other character class, say the archer, allowing that same passive poison damage to pair with a dangerous volley of arrows. The more classes you unlock, the weirder and deadlier the abilities and attacks can become, allowing you to mix and match to your liking. Let’s not spoil some of the funnier surprises, safe to say some of the combinations are hilarious to watch in action and equally enjoyable to take into battle.

Said modifications become increasingly more important as you explore the vast amounts of dungeons on offer. Though most of the early going has you exploring procedurally generated arenas of death filled with a host of creatures and treasure (from the innards of a dead dragon to a literal UFO), many of the bigger and more difficult dungeons have specific enemy buffs, level requirements or unique modifiers of their own that will test your abilities. One dungeon does away with any health pickups entirely, meaning you’ll have to correctly balance your loadout to ensure you’re ready for it.

There’s a ton of quests. A ton!

Similarly, enemies can come equipped with what’s called wards, a defensive shield of sorts that can only be broken by an attack that matches it, whether it’s poison, magic or a heavy melee attack. Some dungeons will have equipped wards of specific types, so you’ll again need to correctly provide your character the right attacks to counter them, otherwise all your attacks will be in vein. Through all this, you become increasingly more aware that the further you play, the more important every single form can be. No one character type will dominate every dungeon and each one will provide abilities or counters that can become vitally important across the world map. Yes, even a little slug will play its part in ensuring your success.

Nobody’s task is halted by a wand requirement to enter certain dungeons. Every character class has an increasing number of quests that can be completed that will have you using specific mods and attacks. The more you complete, the more wands you’ll receive that will allow you to unlock the doors of the major dungeons on offer, while your characters will receive XP to unlock new moves, new characters further up the chain and (in typical RPG style) a healthy stat increase. It might all sound like a chore, but the speed at which you complete quests is a breeze, and by the time you come across another dungeon you should have everything you need to run it without too much trouble. Plus, there are a handful of quests you can purchase from a local vendor that will constantly be available to you for a quick boost of XP per completion.

Is cat, will scratch

If there’s one criticism I do have, it’s the boss battles. Most of the dungeons end with a room that gradually fills with an assortment of creatures and, on occasion, a giant monster with a hefty life bar. Unfortunately, not enough of these bosses stand out from the other creatures as much as I hoped they would. Some do change things up here and there, maybe cloning themselves or using traps to close you in, but there’s not enough done to differentiate them other than being bigger, harder to kill variants of what you’ve already faced off with. It’s a shame too, because otherwise the assortment of deadly creatures you come across are well designed and fun to fight.

It’s Nobody’s forms and their increasingly silly abilities that helps Nobody Saves The World along, providing plenty of opportunities for a unique adventure in whichever way you choose (be it solo or in the added two-player co-op). There’s a handful of side quests that help to mix up the dungeon-delving formula, but the opportunity to roll around as an egg or have a horde of zombies following you around means there’s never really a chance for boredom to set in. That can be an issue with other action RPGs, settling into a monotonous routine of button mashing and samey environments, but Nobody Saves The World deftly avoids falling into that trap to deliver a fun-filled adventure that’s worth playing.

That’s cool but, where did you get that sword?

You’re in for a good time with Nobody Saves The World, an action RPG that bypasses some of the pitfalls of the genre and takes full advantage of its colour and weirdness. Whether solo or with a friend, Nobody’s adventure is a good time with a level of depth hidden amongst its simple but effective combat. Never did I think I’d be saving the world as an egg, but here we are. 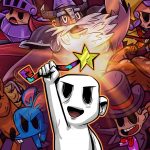 Nobody Saves The World Review
Not just a Nobody
A welcome return by Drinkbox Studios, in a title that manages to entertain on various fronts. It's an action RPG definitely worth diving into a dungeon for, with a lot more exploration needed for those looking for every secret.
The Good
Enjoyable button smashing fun
Clever character classes and attack options
Presentation is crisp, clean and amusing
Two-player co-op is a neat bonus
The Bad
Bosses aren’t as challenging as they could be
Music can be a tiny bit repetitive in places
9
Bloody Ripper

Nobody Saves The World Review
Not just a Nobody
A welcome return by Drinkbox Studios, in a title that manages to entertain on various fronts. It's an action RPG definitely worth diving into a dungeon for, with a lot more exploration needed for those looking for every secret.
The Good
Enjoyable button smashing fun
Clever character classes and attack options
Presentation is crisp, clean and amusing
Two-player co-op is a neat bonus
The Bad
Bosses aren’t as challenging as they could be
Music can be a tiny bit repetitive in places
9
Bloody Ripper
In this article:action RPG, Drinbox Studios, Guacamelee, mark isaacson, Nobody Saves The World, xbox