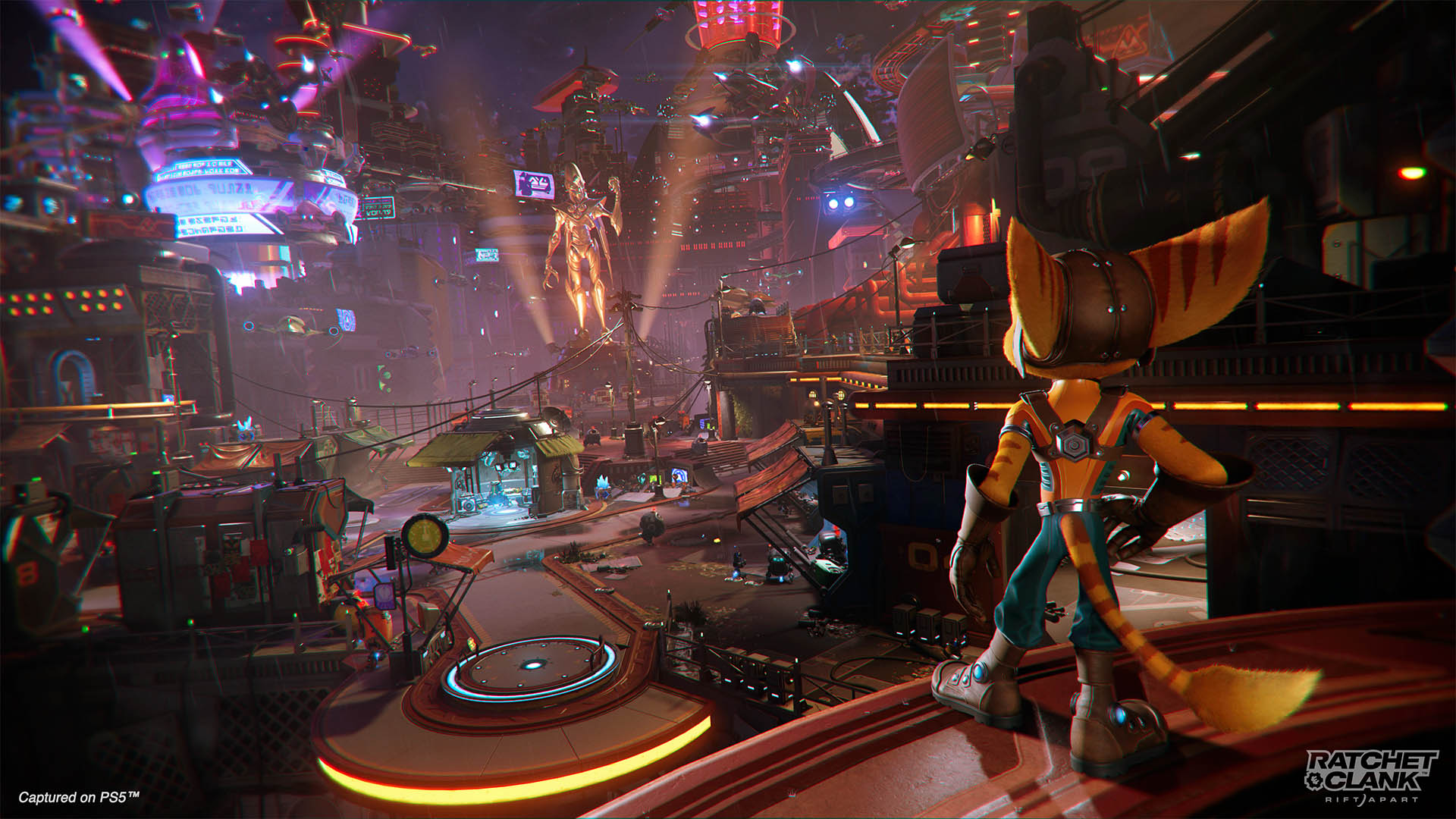 Unless you’ve been living either off-the-grid or in an NBN-enabled area, you’ve probably been on the internet recently, in which case you’ve hopefully taken notice of Insomniac Games’ upcoming Ratchet & Clank: Rift Apart. As the next poster child for the superpowered PlayStation 5 console, the game’s impending release on June 11 has seen the marketing machine start swinging into gear and more and more vision arrive of the game in action for fans to froth over. Bottom line: it looks freaking gorgeous.

But aside from raw power, how is the studio making use of the PS5’s unique featureset to truly push the boundaries of what’s possible in a Ratchet & Clank game? We were recently treated to a hands-off preview of Rift Apart along with a number of exclusive panels with Insomniac staff detailing the game’s journey from conception to creation, and got the low-down on everything that makes this game possibly only on the PS5.

It’s no secret that Ratchet & Clank: Rift Apart is poised to be a sumptuous visual feast and a shining example of the kinds of visuals that the PlayStation 5 is capable of pumping out. There are a number of things that Insomniac has been able to achieve that wouldn’t be possible on previous PlayStation consoles thanks to some of the machine’s more unique features, but it all starts with having the raw power to push detail, density and dynamism to new heights.

One look at screens or trailers and the benefits of new hardware are obvious – there’s never been a Ratchet & Clank, or nearly any game, that’s looked this close to being a pre-rendered CG film. Not just in its gorgeous cutscenes but in gameplay too, with the transitions we’ve witnessed between the two looking legitimately seamless. The game’s worlds are densely packed with life and detail, and often swathes of enemies all at once.

It’s smaller benefits too though, as the art team at Insomniac tells us that increased rendering power has meant that they’re able to provide better feedback to players in these increasingly-busy environments with better animations, damage models and effects. Sumptuous visuals are fantastic, but without also upgrading the player experience it would be for nothing, and Insomniac looks to be squeezing out every bit of performance they can to ensure both happen.

And of course, what kind of nu-generation video game would this be without ray tracing? Doubly so when one of your main characters is a shiny, metal robot and your villain’s head is made of reflective glass. Walking us through the game’s RT implementation, Insomniac admits that they’ve actually dialled down the reflectivity of Clank’s handsome exterior to more accurately reflect the materials, but showed us a slide that visualises the extent of the ray tracing in-game and it’s quite impressive. Not only is each scene packed with fully ray-traced elements, but the team promises that reflections are high fidelity representations of scenes and can even be seen through portals and other elements.

If there was ever any question that Ratchet & Clank: Rift Apart might only be possible on the new generation of PlayStation consoles you need only look to those same new ‘rift’ mechanics to see a glaring example of why it’s definitely the case. The aforementioned ability for our heroes to zip around levels through rifts is cool and all, but as you may have seen in any of the numerous trailers there are also the bigger rifts that take them to entirely different levels in less than a second. Being able to drop in and out of whole new worlds near-instantly is astonishing, and we can’t wait to see how Insomniac leverages this over the course of the game.

It’s not just about loading levels super fast though, as Insomniac walks us through some of the other possibilities that open up thanks to the PS5’s SSD that fundamentally changed their design process. The example that stood out to me the most concerns Rift Apart’s new Topiary Sprinkler weapon, which transforms enemies into hedge sculpture versions of themselves, leaving them immobile and vulnerable. Insomniac’s Director of Core Technology, Mike Fitzgerald, tells us that traditionally the team would’ve had to keep all of the hedge version character models for a given level in memory in order to swap them out for the standard ones when an enemy is transformed. On an older system that’d mean using up a portion of RAM that could’ve been used for something else just to accommodate one weapon’s design, which isn’t what you want.

With the speed of PS5’s SSD however, the necessary models can be loaded up fresh each time they’re needed and then discarded again when they’re not, in the space of a single frame, rather than being held in wait for the time they’re needed and taking up precious memory. It’s small things like this that might have been possible on the PS4, but not without making some other compromise, which just shows how much more potential developers are working with now outside of the obvious raw power and speed.

Lightning-fast load times have even had a positive effect on the game’s cutscenes, with Insomniac sharing they’ve been able to implement visual and editing tricks usually reserved for film (and especially sci-fi) like being able to wipe between two different scenes in completely different levels. The example we saw on-screen showed us a character-facing scene on ground level slowly transitioning to a view of a ship landing on a planet elsewhere in the galaxy, with no pauses or hard cuts to speak of. It’s easy to forget that having storage so fast that it can replace functions that used to rely on more immediate memory has benefits other than just ‘fast loading’, but Insomniac sure hasn’t forgotten.

An oft-overlooked boon of playing on PlayStation 5 hardware is its Tempest 3D audio tech, which not only allows developers to create amazing soundscapes with complete immersion but is accessible to absolutely anybody with a headset that connects to the controller via 3.5mm cable or the console with a USB cable or dongle. That means there are very few excuses not to chuck your favourite pair of headphones on when you’re sitting down to Rift Apart and enjoying everything the game’s audio has to offer. Not only will it give players increased situational awareness in those hectic firefights, but the audio engineers at Insomniac have been putting in the work to utilise 3D audio across the entire experience.

Some especially neat examples we were given were things like rifts, when tethered, bringing the world around Ratchet or Rivet and by extension the player with all-encompassing audio. The scene in the State of Play trailer where Ratchet is searching for a certain nightclub is mentioned as well, as the use of spatial audio helps guide players to exactly where they need to go. Like everything else, it’s just another way that the team is leveraging the PS5’s unique capabilities to completely deliver on their vision and push the envelope for AAA console games.

If you’re interested, click here for a great post on the PlayStation Blog explaining more about 3D Audio and how it can currently benefit anyone with any compatible headset, or check out the below short video from the PlayStation YouTube channel:

If Rift Apart was made for the hardware of the PlayStation 5 console itself, then it’s the DualSense wireless controller that was made for Rift Apart. Insomniac has a long and successful history in designing creative and satisfying weapons and gadgets for video games, and the Ratchet & Clank franchise has always exemplified that. Being able to incorporate the DualSense’s unique adaptive trigger and haptic feedback features has obviously been an enormous win for the studio in crafting the series’ next entry, and from the looks and sounds they’re squeezing out every ounce of potential in the thing.

Obviously one of the biggest changes is the way the game utilises the adaptive triggers in the DualSense. For starters, weapons fire is now finally bound to the triggers as opposed to the controller’s face buttons ala Ratchet & Clank 2016, which is already huge. But by giving each weapon two very distinct actuation points on the trigger the team has been able to give each weapon a unique alt-fire mode that’s easy and natural to pull off. We’ve seen weapons like the Enforcer in previous gameplay demos, with the team pointing out that it can fire from one barrel or two depending on whether the trigger is pulled to the first stopping point or past it. The adaptive triggers mark one very small change that’s set to completely blow Rift Apart’s gadget game wide open, and other PS5 titles like Returnal have used similar systems to great effect so it’s a very promising and welcome update to the core gameplay.

The Insomniac team also mentions using the adaptive triggers for a return of hoverboots (I assume the ones from Crack In Time), but admittedly I was frantically taking down notes about the weapons aspect and missed exactly how this works – but a glimpse at Rivet using them in the Monolith demo we saw points to them being stupidly fun regardless. Haptic feedback is another big win, with the team praising the DualSense for the granularity of its feedback compared to the one-note DualShock rumble and says that Ratchet & Clank staples like collecting bolts and firing weapons will give players an extra sense of what’s happening on-screen.

There are no doubt countless more ways in which the team at Insomniac Games has tapped into the power of the PlayStation 5 in order to deliver a truly next-level Ratchet & Clank experience, and we can’t wait to dive into those when Rift Apart releases exclusively on the PS5 on June 11, 2021.