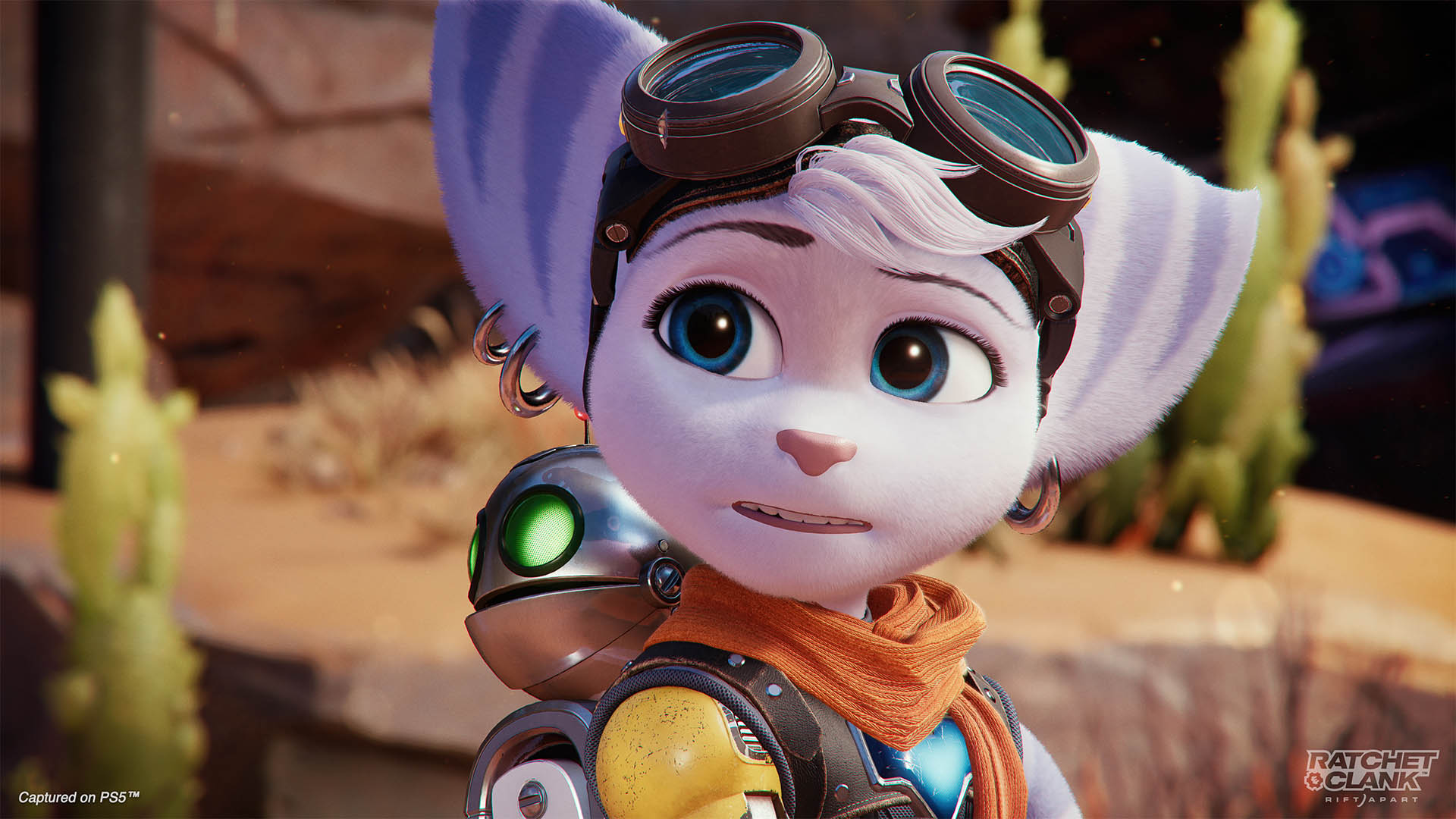 Sure, there are the God of Wars and Horizons on the (ahem) horizon, but if you were to look at the immediate future of the PlayStation 5 console there’s one game that truly stands out as being the next, great nu-gen experience, and that’s Insomniac Games’ Ratchet & Clank: Rift Apart. Whether you’re a longtime fan, a newcomer or somewhere between, it’s hard to look at what we’ve seen of the game so far and be unimpressed. Most of all, it’s incredible to see the franchise still kicking and still occupying the AAA space under the helm of its original studio (and one that’s continued to kick goals with the likes of Marvel’s Spider-Man, no less). WellPlayed was lucky enough to be invited to a special preview event for Rift Apart that included a couple of exciting new eyes-on gameplay demos as well as a number of developer panels and we’re delighted to be able to share what we saw.

Taking place not long after 2013’s Into the Nexus, Ratchet & Clank: Rift Apart continues the story set up by the Future saga that began and ended on the PlayStation 3. After the pair had foiled yet another evil plot, this time involving a dimension-hopping gadget called (appropriately) the Dimensionator, Clank decides to repair the device in secret as a gift to Ratchet. After all, it’s probably the only way for Ratchet to reach the dimension in which his own kind, the Lombax, fled to escape being wiped out. Of course it’s impossible to have nice things, especially ones that can tear through the fabric of space and time, and so it isn’t long before the Dimensionator falls into the wrong hands and the pair are thrust into yet another ridiculous adventure.

The first section of our preview takes us through the game’s opening chapter, with our returning heroes enjoying a parade in honour of their past victories. Acting as both a tutorial and a clever refresher on the previous games, the level sees Ratchet and Clank jumping through a series of floats based on their many adventures and demonstrating their various abilities. It’s a super smart way to get started as well as an immediate injection of nostalgia and excitement for long-time fans, a spectacle packed with gorgeous, dioramic trips down memory lane and floats based on fan-favourite characters. Of course, it doesn’t last long before the evil Dr Nefarious rocks up and swipes that Dimensionator that Clank planned to give Ratchet during the ceremony. A quick fight ensues that ends in both Nefarious and the heroic pair crash landing, thus ending the first, short portion of our look at the game.

The second part of our hands-off preview takes us to what looks like a much later part of the game, and one that just happens to feature the game’s brand-new second protagonist, Rivet. While it was only a couple of weeks ago that Insomniac finally revealed to the world the name of their new female Lombax hero, it’s been clear from the start that she’s quite literally an alternate-dimension version of Ratchet, a fact that Insomniac narrative designer, Lauren Mee, confirmed with us during a developer panel following the demo. To that end, Rivet looks to play pretty well identically to Ratchet in the level we witnessed – the arid wasteland and junk town of Molonoth Gulch. Here, Rivet and Clank are seen searching for The Fixer, a gigantic Iron Giant-esque robot, to help them repair a broken artifact. Unfortunately, and ironically, the Fixer is broken as a result of an ongoing invasion by none other than Rusty Pete and his pirate gang from Ratchet & Clank: Quest for Booty. Well, alternate-universe Rusty Pete at least, now a pompous pirate captain with a French accent named Pierre.

Much of the Monoloth Gulch level sees Rivet face off against Pierre’s crew, and gives us our best look yet at the game’s updated third-person combat. The most noticeable change is an updated over-the-shoulder camera that further aligns the series’ core gameplay with that of a modern action shooter. In a later panel detailing the process of designing the game’s weapons, the team at Insomniac explains that the camera’s angle changes dynamically depending on the weapon in use, and that strafing, jumping and dashing have been made more fluid and tactile than ever before. Given that we’re later in the game here, Rivet’s arsenal is quite expansive and includes series favourites like the Buzz Blades on top of a ton of brand new weapons like the Topiary Sprinkler we’ve seen in previous footage as well as some alternate-reality takes on classic gadgets. While the non-participatory nature of our preview meant we’re yet to get a true feel for these, the design team gave us a rundown on a handful of the game’s new weapons and how the DualSense controller is being utilised to enhance their functionality, which you can read about here.

Aside from weapon handling, movement and platforming both in and out of combat look to have been expanded upon in just about every way as well. Both Rivet and Ratchet look to share the same basic moveset (Rivet’s giant hammer in place of an Omniwrench aside) and can now pull off some sick parkour moves like wall running as well as make use of the ‘Phantom Dash’ that you might have spotted in recent trailers. As someone who recently put many frantic hours into another PlayStation 5 exclusive, Returnal, I can predict that this powerful dodge move that grants a brief moment of invulnerability will be a staple tool in my repertoire throughout Rift Apart. Those iconic Ratchet & Clank grind rail sequences featured heavily in both levels we saw, looking as intense and spectacular as ever with the addition of the aforementioned wall-running and, in the second demo level, the gigantic Fixer wreaking havoc all around.

Throughout both of the demo sections that we saw, one thing remained abundantly clear – Rift Apart is going to be an absolute showpiece for the power of the PlayStation 5

Though this particular sequence didn’t give us much of a look at the Rift Tether’s portal-hopping level traversal it did feature one of the new ‘pocket dimensions’, which are interdimensional mini-levels tucked away for players to find and conquer for rewards. The one we saw in Monoloth had Rivet riding a giant, superfast space bug called a Speedle through an obstacle course reminiscent of past games’ hoverboard challenges, unlocking a new helmet for the trouble before returning to the level proper. That helmet, as the team explains in a later presentation, is part of a swathe of unlockable armours that can be mixed and matched on both Ratchet and Rivet to give them unique looks, even giving players the ability to edit their colour palettes.

Throughout both of the demo sections that we saw, one thing remained abundantly clear – Rift Apart is going to be an absolute showpiece for the power of the PlayStation 5. That much has been evident from what the public has seen in footage thus far, but it’s further exemplified in the seamless melding of action-packed, explosive and visually dense gameplay and gorgeous, cinematic cutscenes that we witnessed. Insomniac is able to deliver the very hyper-real, Pixar-quality presentation that has long been the holy grail for 3D platformers in both gameplay and cutscenes, as well as load in entire new scenes in an instant thanks to the PS5’s SSD, meaning transitions between both are effortless. With the amount of story and dialogue we saw being delivered concurrently with gameplay as well, it’s clear that Insomniac wants to keep players in the action and engaged as much as possible.

Of course, this wouldn’t be a modern AAA PlayStation exclusive without the narrative ante being upped significantly. While a lot of that is obviously still under wraps, we were able to learn that the overarching goal for Rift Apart was to work with both the slapstick adventure of the original trilogy and the character-driven drama of the Future saga in giving the series a modern identity. As the team explains, the dimension-hopping storyline has allowed Insomniac to tap into richer narrative themes than the series has seen before, giving them the chance to explore how their characters might develop through different lived experiences than the ones we’ve seen.

Where Ratchet is still the hero with a heart of gold that struggles with his own insecurities about family and his place in the universe, Rivet is decidedly different as a character (despite literally being Ratchet from another dimension). Without a pal like Clank, she’s always had to go it alone, and being a lone wolf has made her awkward but still kind and resourceful and level headed. She’s tough but not cynical or cruel, with the team describing her as a ‘scrappy little punk’. Hearing how much Insomniac loves Rivet is totally heartening, and they truly believe they’ve created a new hero for the franchise which has me super excited for its future.

Even just this small taste of what’s to come in Ratchet & Clank: Rift Apart when it drops on June 11, 2021 has me ridiculously keen to play the full thing. It’s fantastic to see a series so dear to fans span entire console generations and continue to grow and innovate. It’s pretty clear that Insomniac is poised to knock it out of the park once again, with not just a top-tier PS5 exclusive but a new and immediately endearing protagonist in Rivet. For as many times as I continue to go back and rewatch all of the footage released so far, and for this brief but exciting look behind-closed-doors, all I can think about is getting the game in my hands. Don’t let its old-school platforming roots fool you – Rift Apart looks every bit like a GOTY contender.