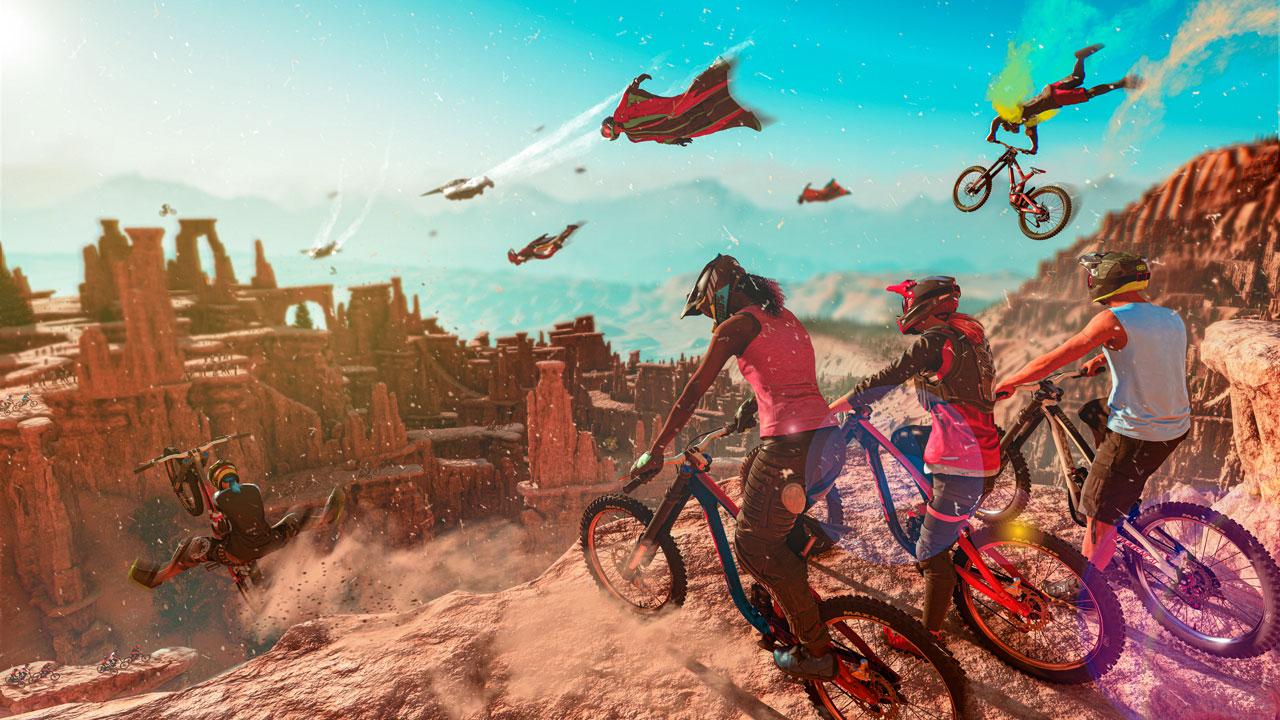 Based on the title of this preview, you may think that I am talking about Canadian rockers Nickelback and their hit song How You Remind Me. Truth be told, as I write this, I am listening to the raspy vocals of Chad Kroeger as he croons how he “never made it as a wise man,” however that’s where the similarities end because quite simply, Ubisoft’s Riders Republic has reminded me of how shit I am at extreme sports.

Last week I was able to go hands-on with the closed beta for Ubisoft’s upcoming open-world massive multiplayer extreme sports title, a game for which I admittedly had little hype. However, by the end of my 3–4 hour group session with a bunch of Aussie journalists and a Ubisoft representative, not only had my interest in the game elevated, but WellPlayed’s standing in the gaming community had taken a tumble that wouldn’t look out of place on ESPN Sports Bloopers. You see towards the end of our session we participated in what is called a Mass Race – a three-race event that features up to 64 participants in a mix of the sports in the game. At the end of the event, the overall leaderboard is displayed and there I was, dead fucking last. To answer Kroeger’s question of “are we having fun yet?” I most certainly was, which is all that matters. Besides, games journalists are meant to be bad at video games, so at least I am staying true to my roots. Shoutouts to me, I guess.

Let’s rewind a few hours though.

I boot up the beta and get stuck into the tutorial, giving me a taste of the sports I’ll be playing, which are mountain biking, snowboarding/skiing, wingsuiting and jetpacking. However, the bulk of my first 90 minutes is spent mountain biking, mostly downhill at high speeds. Now I’m not sure how fast you’ve ridden a bike downhill, but I tried it once and halfway down the hill I was riding I gave up all hope of stopping safely – it was terrifying. Thankfully, as I hit the curb and went flying off my bike, dog shit broke my fall. I never did that again.

Doing it in Riders Republic however is quite fun. Seriously, fanging down a hill as fast as you can from the safety of your couch is exhilarating. If I could give any hint it’s to play the game in first-person because it feels way faster than third-person and it heightens the immersion and realism. But it’s not just about going downhill, it’s also about getting serious air and pulling off some insane trickery, and in an excellent design choice, whenever you go flying the game will automatically revert to third-person making it easier to land.

Given the game is developed by Ubisoft Annecy, the same team that made Steep, it’s no surprise that the snow sports are just as fun. Snowboarding is certainly the pick of the two, and if I could recommend Ubisoft adding anything it would be a mode called King of the Mountain. If you’ve seen the film Out Cold you’ll know what I am talking about, but if you haven’t it’s essentially a race that requires all participants to have a full glass of beer and the person who makes it from the top of the mountain to the bottom with the most beer in their glass is crowned King of the Mountain. Plus, in the words of lead actor Jason London, “most importantly pushing, shoving and cheating are encouraged.” Sounds good hey? Make it happen Ubisoft.

Seriously, fanging down a hill as fast as you can from the safety of your couch is exhilarating

The other two sports I spent time with were wingsuiting and rocket wingsuiting, and I can tell you that being in the air was more challenging than being on the ground. These two disciplines take a certain skill that I have yet to acquire, as I often found myself banging into trees or just eating dirt, but once you get a handle on the controls it is certainly fun.

Despite the different sports, all the races follow the same process, which is to pass through checkpoints to finish first. Herein lies the biggest challenge – it’s so easy to miss the checkpoints, whether due to being bundled out of the way by another racer or just simply going too fast and flying right past them. Thankfully, the game doesn’t punish you by making you turn around and ride or whatever back to the checkpoint. Instead, you can rewind to an earlier point and try again. It’s not just racing though, some events will require you to try and score as many points as possible from performing tricks, and to be honest it’s probably more fun watching your character stack it than pull off tricks.

While this all sounds great, the biggest problem initially was that the game’s tutorial felt like a slog – riding solo is not the way to play Riders Republic. Plus there’s a ton of cutscenes. I pushed through because mechanically the game is pretty solid – the riding, snowboarding/skiing and wingsuiting all feeling pretty smooth.

After completing the tutorial, players are introduced to the social hub, which is a shared world where players can customise their character (there are tons of costumes to buy, including a giraffe outfit), join up with other players, practice their skills and find PvP events to compete in. It’s here our squad assembles, putting the game’s cross-play feature to work, which ran pretty flawlessly. From there it’s pretty much more of the same, except it’s loads more fun doing it with a group of people.

Out Cold the video game?

One certain thing is that the world is massive, this is an Ubisoft game after all. Littered across the map are a bunch of events to take place in and endless amounts of player icons. The other thing there is lots of in the world are trees and you will hit them, lots of them. Seriously, they are everywhere, Planet Ark would be impressed.

As our session came to an end we competed in the Mass Race, which was probably the most fun I had, even though I was the last home (actually I was so far behind I was a DNF). It is truly chaotic and will certainly be a player favourite. They only happen now and again, so you’ll need to keep an eye out for when they’re about to occur.

Lastly, we participated in what is called a Tricks Battle. It’s essentially capture the flag with deathmatch mechanics where trick points replace kills. Two teams duke it out in a smallish arena with ramps, grind poles and whatever else to perform tricks on, and the longer or sexier your trick is, the tastier the points reward is. Fail to stick the landing and you’ll lose the points. Once you perform a trick on an area your team will own that area, the longer you own it, again, the juicier the rewards will be. The first team to the points total wins. I found my calling in this mode, mostly because there were no checkpoints.

Despite coming into the beta with little interest, my time with Riders Republic has convinced me that the full game will be tons of fun when playing and enjoying the madness with a group of friends. It’s going to be interesting to see how much legs Riders Republic will have. In its favour we’ve really not had anything like this before and with a lot of people stuck at home in lockdown unable to go biking or snowboarding, this could be the perfect panacea.