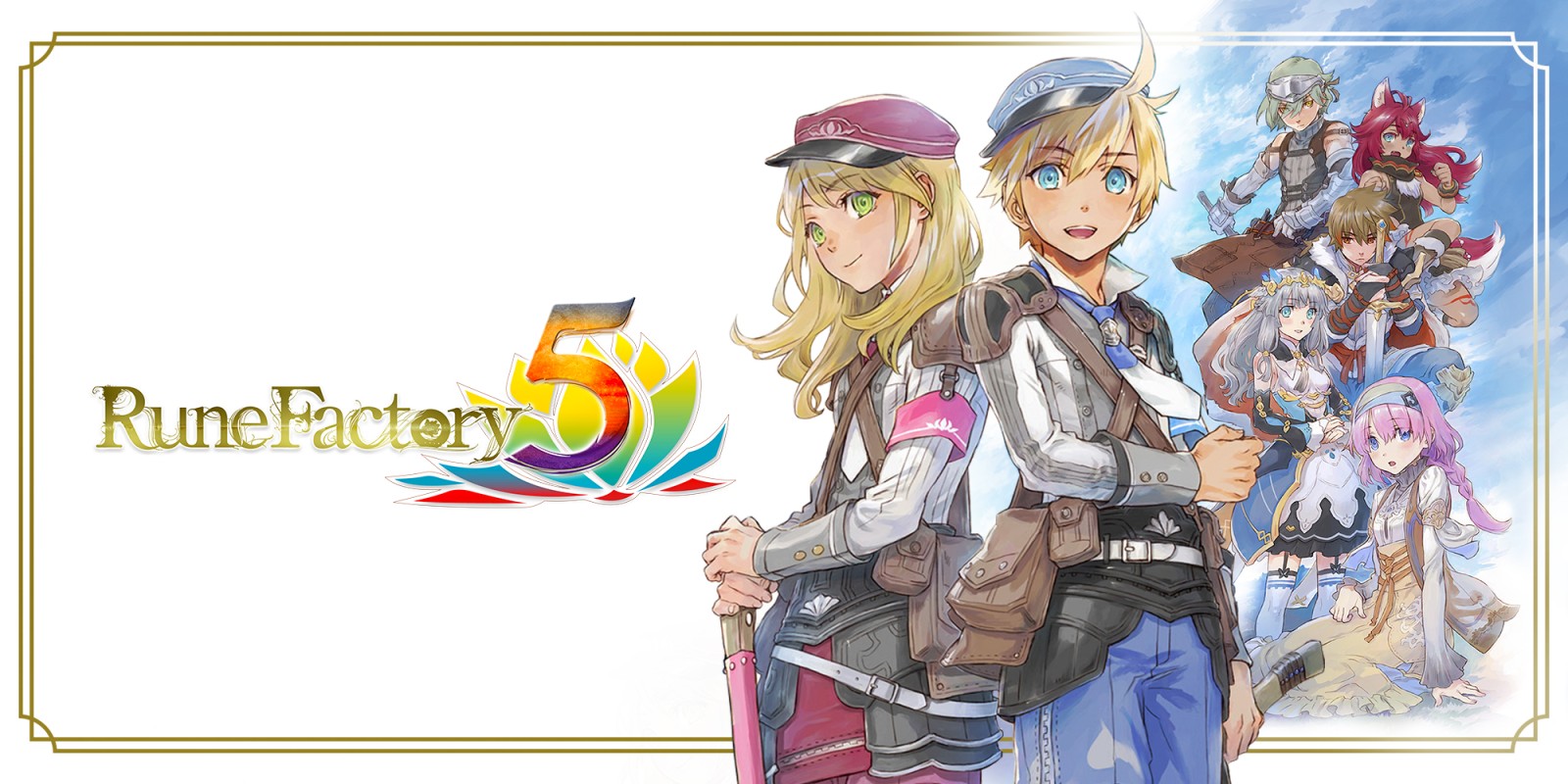 It’s no surprise that I love farming sims, I mean how can you not? They’re chill, the characters can be awesome/sexy/cute/ or whatever floats your boat and there’s something satisfying when you hit paydirt and bring home the bacon. When Rune Factory 4 Special was announced as a Switch port I asked myself how I had never heard of this franchise. It was like all my favorite things had been rolled into one neat package: farming, monster taming, crafting and dungeoneering with a little side of romance. So when Rune Factory 5 was announced I was really excited to experience a brand new title in this franchise.

Sticking close to a classic trope of the genre, when you start Rune Factory 5 (RF5) you are an amnesiac who wakes in a forest. You don’t even have time to get your bearings before you hear a girl screaming nearby, but after you rescue her via the first in-game tutorial you both head back to her town a bit battered. You gain the villagers’ trust and join SEED, an organisation that keeps the world in order and helps out the village through keeping monsters under control or running errands. As you have no memory, you have to prove yourself to your new compatriots and earn your keep.

The village of Ringbarth is your new home, but it’s not all sunshine and turnips despite how pretty the town looks in spring. Runes (sources of magic that keep the world stable) are disappearing, which means mayhem and monsters are running amok. The whole save-the-world-from-monsters story is as traditional as it is simple, but it does deepen over the course of your playthrough, and it drew me with some unexpected characters and secret agendas. The writing and intermittent voice acting is all well done and went a long way to making me fall in love with each and every character.

Speaking of love, one underlying activity within RF5 is romance, and while RF5 isn’t the first to do so, same-sex marriage is completely possible in this game. It’s also not of the half-arsed variety, and you won’t be labelled ‘special friends’ in a weird form of soft censorship; love of all kinds towards whomever you choose is celebrated. There are a huge number of bachelors and bachelorettes and even some furry-esque counterparts in the form of were-humans, so there’s something for everyone. If you’re friendly enough with a character you can also invite them to join you on your adventure when you farm or fight monsters which is a nice addition.

At the heart of it all, RF5 is a farming sim, and while this aspect of the gameplay is incredibly familiar at this point, it’s got the enjoyable rhythm of busywork important to the success of these sorts of titles. You’ll gain money and materials for recipes so you can make food which is essential for healing, making friends and romancing your love interests through their stomachs. Farming is very similar to most previous games in the genre with the addition of soil levels being the only difference. If you’re not wanting to get too deep into farming you don’t really have to pay attention to this function, which essentially allows you to improve your crops through optimising the soil. The variety of crops is fairly typical but you can unlock more exotic ones through side quests.

Another big part of RF5 comes in the form of RPG elements. When you don’t want to tend to the farm you can head out into the world and gather items, kill monsters and venture into dungeons tied to the main story. The combat is more intensive than most farming sims, but very accessible and enjoyable. Just like previous Rune Factory games, monsters spawn from gates within an area, and you must kill the gate to stop them from respawning before or after killing all the monsters depending on your strategy.

Killing monsters is a great way to level up your skills, and there is a huge range of weapons to suit any play style, and if you’re lucky you will get useful material from killing the monsters as well. RF5 also has an awesome auto item pickup feature that is a godsend, as you can just zoom around and collect all the drops without having to pick things up individually. There is a great variety to the monsters as well and the bosses look particularly cool. The game also has a number of difficulty options which adds to the accessibility of the game, opening up the experience to all levels of gamers, from RPG novices to farming sim aficionados.

If you’re feeling lonely and have built a monster barn then it is possible to wrangle yourself some monster friends. If you weaken a monster and ensnare it with magic you can have it join you as you go about your business and such is their loyalty they will even attack other monsters for you. If you give them an item they like you can tame them fully and send them to your barn. From there if you become friends with them you can take them on adventures with you, ride them, get them to help look after the farm and even plant seeds. If you’re skilled enough and have the right items you can even tame bosses, but keep in mind they have some fairly specific tastes.

While you start with a small generic looking farm outside your residence in the beginning, it isn’t going to be like that for long. As you play through the story you get to meet adorable but GIGANTIC farm dragons. You can tend to your farm while riding on their backs, and by feeding them crystals you can make different events happen including making it rain. Agriculture and dragons are a match I never had imagined would work so well, but now I don’t want to till the earth any other way.

Overall, RF5’s gameplay loop is very variable as well as enjoyable and can cater to whatever playstyle you have. There are a large number of things to upgrade or unlock, from shop upgrades to cooking or crafting stations. Just like past games there is also a skill for just about everything, so by just doing what you need to do you are leveling up with no need to mess with skill points.

In a visual sense, the character models of both NPCs and monsters were really well done. The player character isn’t excessively stiff and is very expressive which is appreciated. The world is a bit empty when you look at it from a distance, with concessions obviously being made in light of the Switch’s slightly meagre processing power. As you move, additional grass and things do also tend to visibly load in, but as far as pop-in goes it’s actually quite smooth and not as harsh as it could be. The game and environments are really pretty and the aesthetic is interesting overall, being on par with (or even better than) other games in the genre from last year. The game overall runs smoothly, but there are occasional frame drops when you load from your house into town and or teleport to a new area, but they’re certainly not game breaking or excessive. The game also uses optional dynamic resolution to ensure the best performance. It wasn’t noticeable in docked mode, but in handheld mode it manifests as a softening of the visuals a bit. Noticeable yes, but again not that disruptive.

RF5 doesn’t break much new ground but is enjoyable due to its wide variety of tasks, unlockables, and interesting characters. Quality of life options such as auto pickup and smooth fast travel are also absolute winners here. If you’ve never played a game from this franchise but love other farming sims, or you’re a returning veteran in love with the genre, this adventure is definitely one worth embarking on. 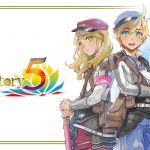 Rune Factory 5 Review
Towers of Turnips
Rune Factory 5 doesn’t break the mould but it's still definitely worth your time, for returning fans and potential new ones.
The Good
Lots of variety in terms of tasks and gameplay styles. No two days have to be the same
Lots of romance options, same-sex marriage and you can take love interests on adventures
Heaps of adorable and interesting monsters to slay and befriend
Accessible combat, variable difficulty options and good quality of life options
The Bad
Some frame drops
World at a distance is a bit sparse
Hitting items with tools can be a little janky
8.5
Get Around It

Rune Factory 5 Review
Towers of Turnips
Rune Factory 5 doesn’t break the mould but it's still definitely worth your time, for returning fans and potential new ones.
The Good
Lots of variety in terms of tasks and gameplay styles. No two days have to be the same
Lots of romance options, same-sex marriage and you can take love interests on adventures
Heaps of adorable and interesting monsters to slay and befriend
Accessible combat, variable difficulty options and good quality of life options
The Bad
Some frame drops
World at a distance is a bit sparse
Hitting items with tools can be a little janky
8.5
Get Around It
In this article:dungeons, Farm Dragons, Farming Sim, Marvelous, Monster taming, nintendo, Nintendo Switch, Romancing, RPG, Rune Factory, Rune Factory 5, XSEED