There is an easy argument to make that the landscape of gaming has a great many over-saturated areas. Zombies are rife, military-esque shooters run rampant and leather-clad men (and women) with swords grind out EXP and confuse parents worldwide – however, pirates are still somewhat of a rarity. There has been only a handful of noteworthy pirate-y titles throughout the years, so when I became acquainted with concept of Sea of Thieves (designed to be the definitive pirate experience) I was exceptionally keen to ‘sea’ it develop.

With the development being helmed by Rare (a studio whose name still causes nostalgia waves to wash across the mature gamer) it was an intriguing relationship to consider – it’s the first time in a long time that Rare has had an opportunity to develop a ‘proper’ new IP. It was clear that Rare wanted to create a ‘robust’ seafaring adventure that appealed to scallywags and cut-throats of all kinds.

Better them than you

But what makes a pirate game ‘robust’? If your definition of video game piracy includes cruising around on your vessel, seeking loot and clashing with other crews, Sea of Thieves has you entirely covered. The open seas are gorgeous to look at, the world feels vast enough – and managing your ship as part of a crew is fun and involved, without feeling too simulator-like. Travel to islands to capture livestock, defeat cursed pirate skeletons or simply dig up lost treasure – whatever your greedy heart desires. Perhaps you’d rather be a scourge of the seas, scanning the horizon for other ships that you can unload your cannons into – in hopes that their hard earned booty can become yours, as you sail off on the same wind that carries their curses towards you.

The ‘living world’ aspects of the game, such as the Kraken encounter or Skeleton forts are disappointingly brief in retrospect – as the very novelty of them feels cheapened by the repetitive nature of literally everything else

However, if you instead are looking for something more …persistent in your Pirate world, you may find Sea of Thieves coming up a few doubloons short of a bounty. The same ship you lovingly repair and defend with your life simply vanishes at the end of your session, replaced with a freshly spawned one when next your crew gathers. Each mission/quest you complete fills your coin purse and increases your reputation with the game’s myriad of ‘piratey’ factions, but changes very little cosmetically. Though I may work hard to impress the Voodoo Lady from the ‘Order of Souls’, the most she will offer me is some fancy skins for my pirate gear – when I would much rather see her in awe of my presence, or even offer new dialogue options to further inflate my ego and increase my personal pirate legend. 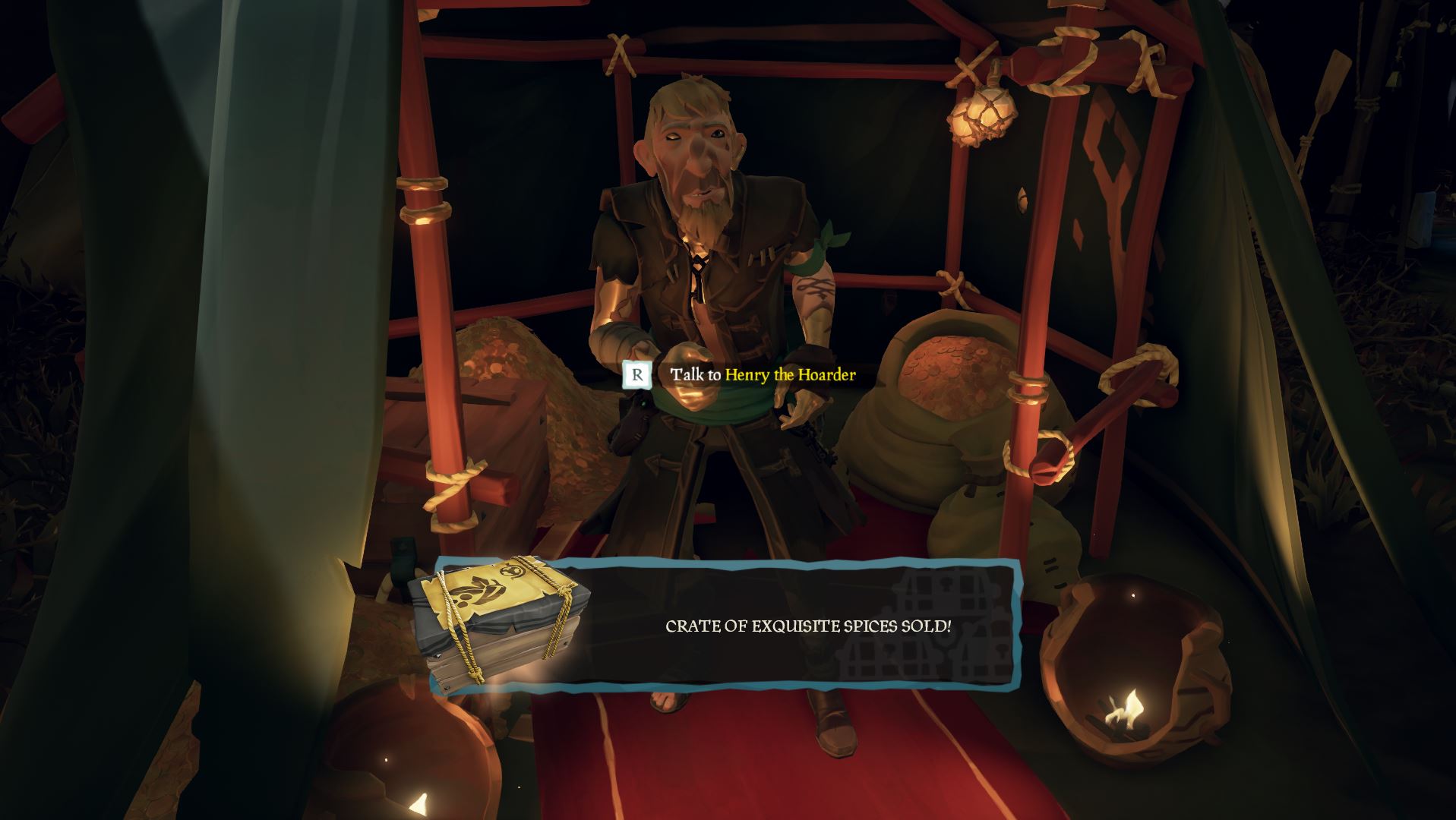 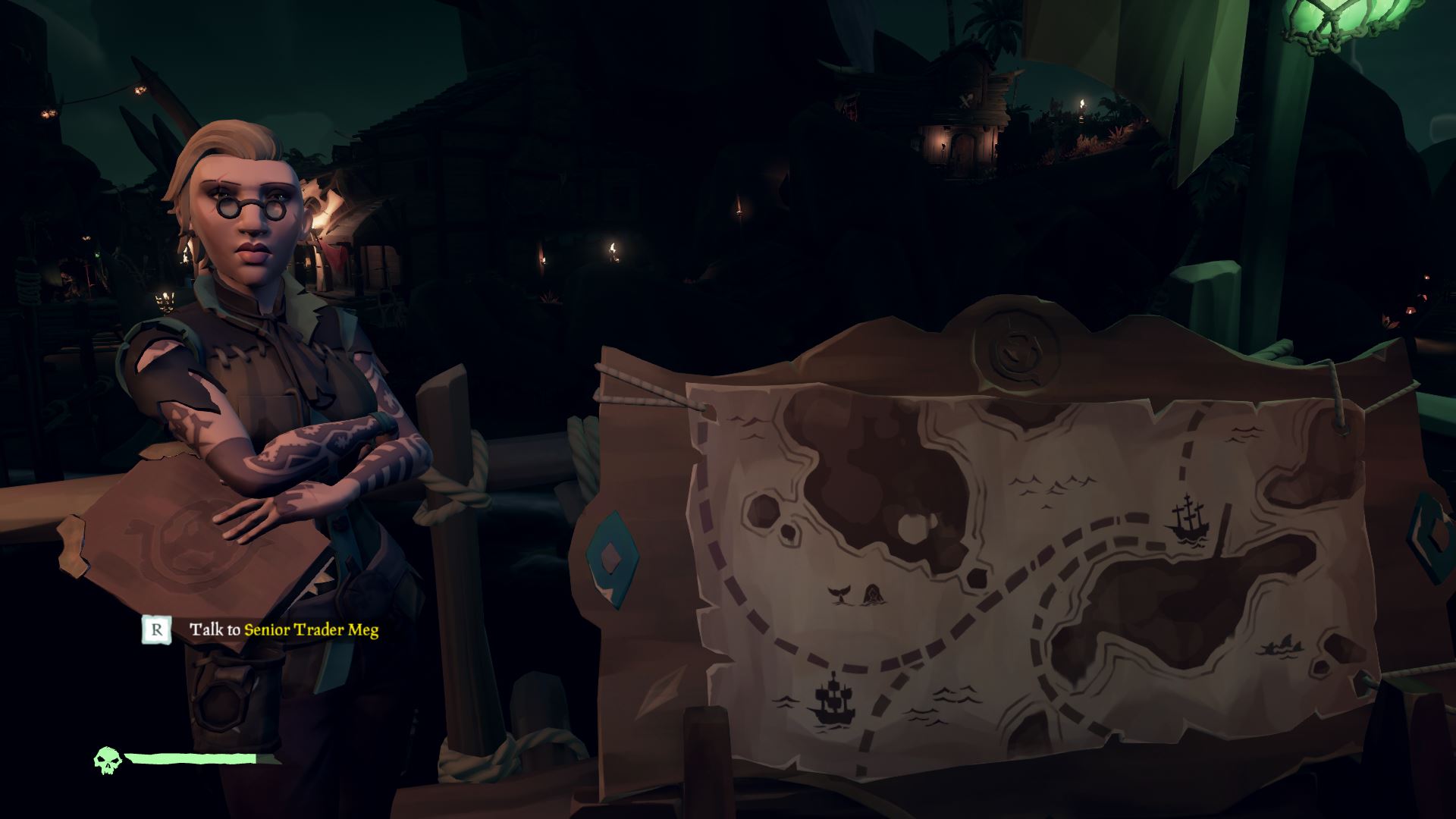 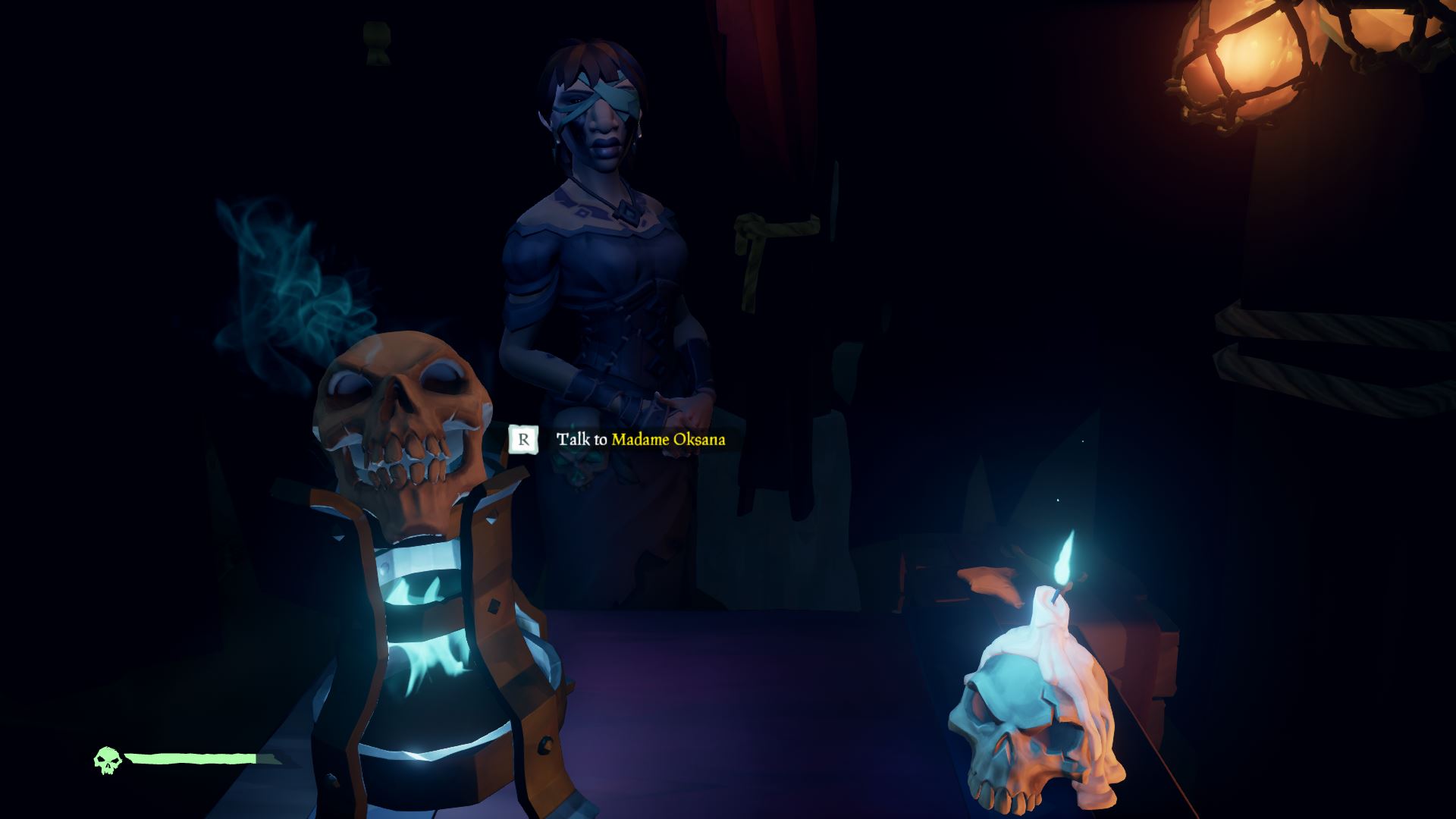 You could argue that establishing the pirate genre is treading new ground (charting new waters?) and this in itself would make it difficult to measure what could be considered a ‘feature complete’ game of plunder and piracy, but there are enough analogues in the gaming world that inspiration surely couldn’t be terribly difficult to find and adapt. The lack of an option to give your ship a name (a feature oft mentioned and promised) being absent on release just feels odd, along with no enduring effects on your ship between sessions.

At the end of my first truly epic session, the sight of my hole-riddled galleon filled me with immense pride – we had sunk many vessels, and managed to remain afloat. Its battered hull felt like battle scars, a warning to anyone who wanted to take us on that we were made of sterner stuff. When I formed my party the next day, I mentioned to a friend that I was excited to show him my battered efforts – before noticing that the game handed you a new ship each session. I had stressfully repaired my ship during battle, dodging cannonballs and fending off enemy boarders, I hoped my efforts may be reflected beyond that session in some way.

You can argue that the game combats this by way of customisation, as the only really enduring changes to your character, gear and ship is through purchasable cosmetic items. The pricing of these items with in-game currency exist along a very broad spectrum, with a couple hundred pirate coins buying you a sweet beard (easily attainable in minutes) compared to purchasing sails for your ship (to strike fear in others from far away) costing tens of thousands. When the only casual progression in the game are these cosmetics, it’s hard to ignore that there really isn’t many of them – however Rare has explained that they have a fairly incredible system to add more cosmetics seamlessly to the game, even without the need to deploy a patch.

Good times with friends – the most applicable tagline for this game

It does elicit a reaction of begrudging respect when encountering a tricked-out ship in the wild, because at a glance it does communicate that the player has either played a great deal more than you, or at least has focused on buying the right items to intimidate. There is a notion of comfort in this system also, because Rare has made it a point to avoid any form of vertical progression – meaning Mr. Fancy Sails isn’t packing any more heat than you are. There is an attraction here, because a new player can be on even footing with anyone they meet; it all boils down to individual skill and personal improvement. However this then leaves many players feeling as if they are stagnating – as they come from so many systems that focus on unlocking stuff, or filling bars/increasing numbers, the gameplay of Sea of Thieves will need to be incredibly engaging to keep them around.

The core gameplay loop of Sea of Thieves is a series of peaks and troughs, ranging from sheer joy to abject frustration. I find myself entirely conflicted as to whether I want to criticise it for being a shallow gameplay experience, or praise it for being an effective pirate roleplay simulator. For every incredible moment when your cannonball connects perfectly at the waterline of the enemy ship, there is a realisation that the island you are exploring is aggressively devoid of life. Each jaunty sea shanty played with your friends atop your crow’s nest, crushed by the disappointment of completing an identical quest for the 15th time for very little reward. As a whole, the game forms an incredible set of systems that offer so much promise – but the implementation feels so jarringly short of Sea of Thieves’ true potential. Even the continued promise of the fabled ‘end game’ (The PIRATE LEGEND) is difficult to become enthusiastic about as it’s also clearly communicated that it requires a level of commitment that might outlast this title’s time in the sun.

After 50-ish hours with the wind at my back and the salty spray on my face, I am still enjoying those incredible moments that Sea of Thieves can create – yet I find myself having great difficulty recommending it to others without an incredible list of caveats. Sea of Thieves represents a foundation for an experience so unlike anything we have experienced as gamers, with a core of dedicated fans that have every right to be enthusiastic. Its greatest struggle will be convincing others to join it on its journey.