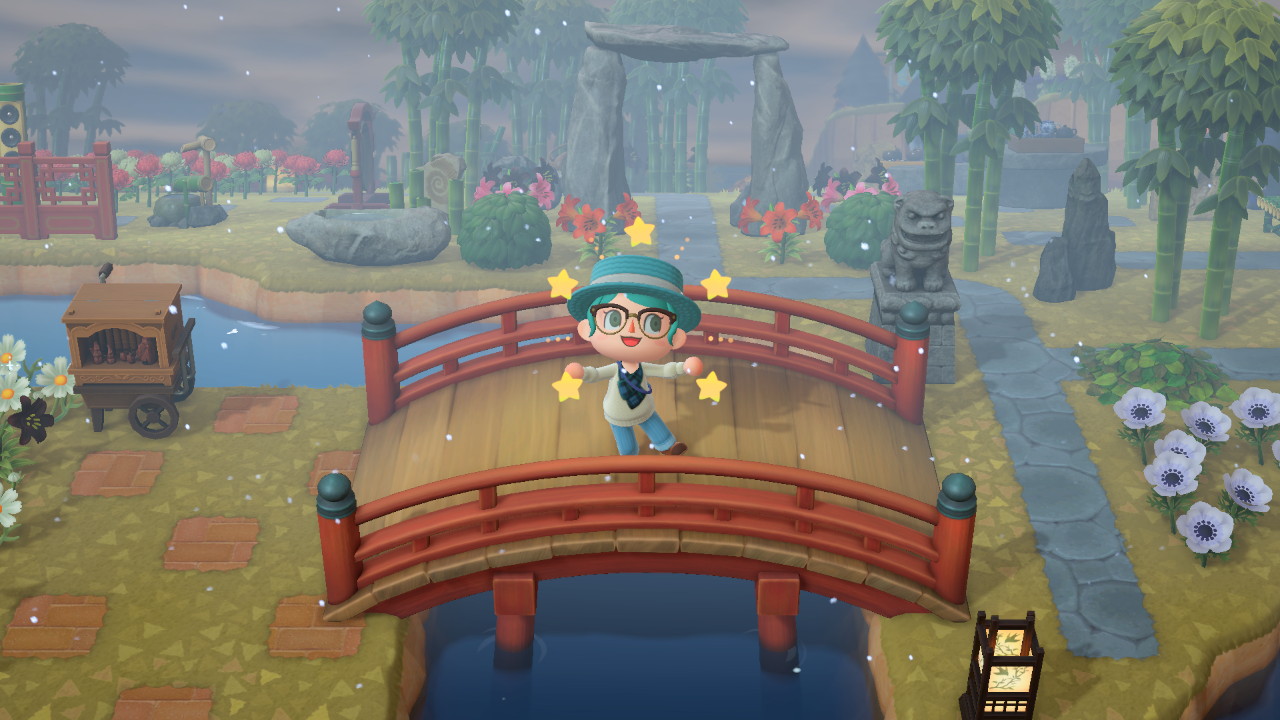 In late May we saw the first day of winter in Animal Crossing: New Horizons if you have a southern hemisphere island. While the trees are slowly loosing their vibrancy, the only real change so far is that it no longer rains but snows instead, with your villagers pulling out their beanies and coats. The shops are now selling more winter-related items, including a seasonal item section in Nook’s Cranny which now sports winter-related decorations outside. Winter always seemed like a slow season to me in past games, there were hardly any bugs to catch for one and not many activities to do per day. But this time around some of the bugs now appear in winter, like the Emperor and Raja Brook Butterflies, plus Tarantulas are still available where they were previously a summer exclusive. Hunting the rare Stringfish will also keep you busy during winter too, only available between 4 pm to 9 am in the river up on high cliffs. Plus with winter looking so much prettier in New Horizons I think I will enjoy these months so much more.

June has a number of time-limited items available. Until the end of June you can get two items for International Children’s Day and a mug for Fathers Day from the special items section of Nook Shopping. June 7 is the Winter Solstice and there are two limited time items, available till July 6, the summer-solstice crown and the winter-solstice sweater, that you can only buy from Nook Shopping.

Throughout the month of June we also have the Wedding Season photo event on Harvey’s Island, which is the first time we have seen Reese and Cyrus from New Leaf. It’s recommended that you do the event at least seven times to unlock all of the exclusive furniture and clothing items, pieces are progressively unlocked. If you just want the event currency (Crystal Hearts) and don’t care about the event intrinsically, randomly fill the room with the correct coloured wedding furniture and you will receive the maximum of event currency per day. Also make sure you buy as you go as you can only buy eight items from Cyrus a day. 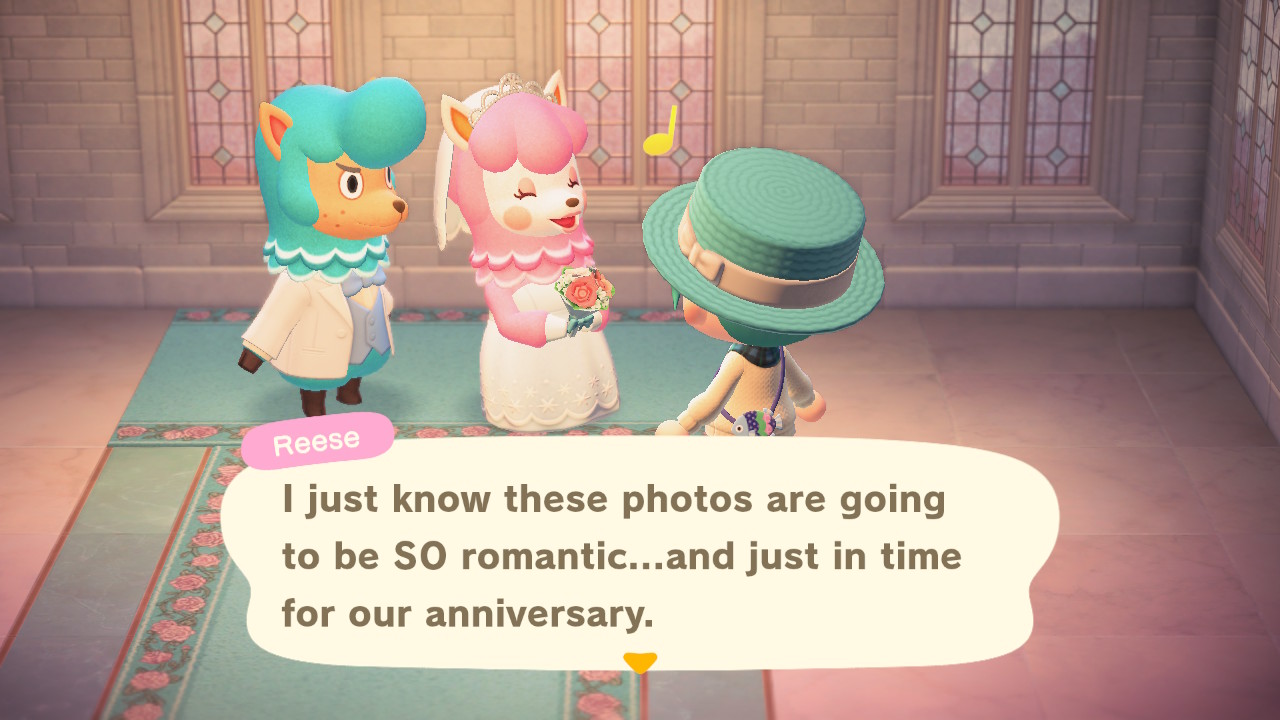 Halfway through June, on or around June 11, we should see snow start to stay on the ground of our southern hemisphere islands, making them into a winter wonderlands. This is also when dung beetles, snowballs and snow flakes will show up until part way through August. Two snowballs will spawn on your island at one time, and you can roll them to make them bigger and build yourself a Snowboy! If you make Snowboy perfectly (bottom snowball should reach the top of your ear, top snowball is up to your chin, make sure your camera is tilted correctly; see picture for a perfect snowboy) he will give you a DIY recipe from the Ice furniture set. If you get it wrong he will let you know by complaining. Snowboy will last for four days and he will give you a large snowflake if you talk to him each day if he’s perfect. There are fifteen DIY recipes to get from the Snowboy: frozen-treat set, frozen chair, frozen counter, frozen table, frozen bed, frozen partition, frozen arch, frozen pillar, frozen tree, frozen sculpture, three-tiered snowman, ice wallpaper, ice flooring, snowman hat and ice wand. The smaller snowflakes float around your island and similar to the fall leaves you can catch them with your net and they cast a shadow. If you accidentally lose or break one of your snowballs as you’re making Snowboy you can save and restart the game and they’ll respawn. You can also go in and out of a building (potentially more than once) for this to happen as well, in my experience the respawned snowball is located pretty close to the remaining one. 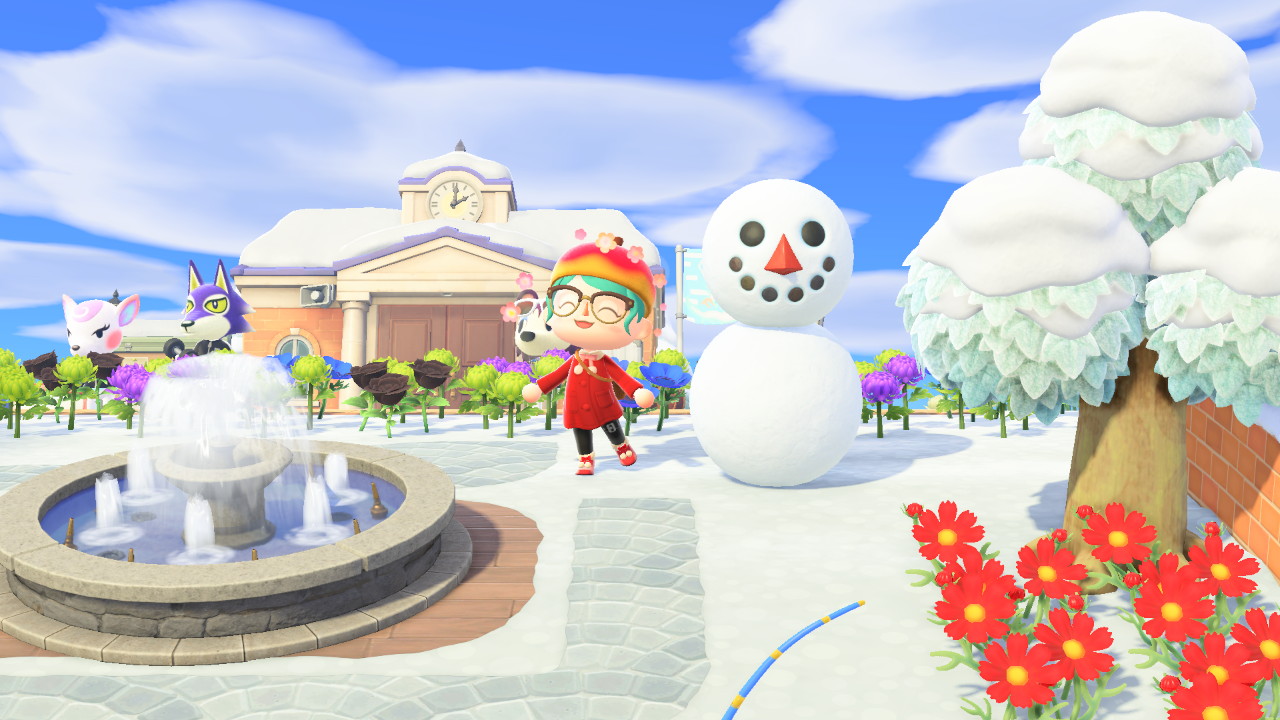 There are also an additional six DIY recipes that can be found in balloons and bottles during winter. These are the snowflake wall, snowflake pochette, ski-slope wall, ski-slope flooring, iceberg wall, iceberg flooring. The quickest way to get these DIYs is via balloon farming (see our autumn guide for more details). These recipes, like those from Snowboy, also use snowflakes as crafting materials, requiring 143 small snowflakes and 15 large snowflakes to craft all of the winter DIY’s. Like she does at key points in each new season, Isabelle will give you the snowflake wreath DIY on a day around or after June 11 with no announcements. If you dont receive it from Isabelle you can also find it in a balloon present or a message in a bottle.

In addition to snow during the winter season you can also experience another unique weather event, the polar aurora, during nights with a clear sky. Your villagers will talk to you about it during the daytime of the day it will occur. Isabelle may also announce it during her morning announcement. The aurora will occur in the night sky between 6 pm and 4 am.

On July 11 we will have our second fishing tourney since the game released, and this time around it’s the winter fishing tourney. It appears that the tourney will be similar to the autumn one, but we will confirm closer to the event.

There could be other events to come later in winter as the Wedding event was the last free update event in the most recent announcement from Nintendo, we will report on any new information as it comes. What are you looking forward to experiencing this winter in Animal Crossing: New Horizons? If you have yet to pick up this game, check out our review and decide if you want an island getaway of your own.