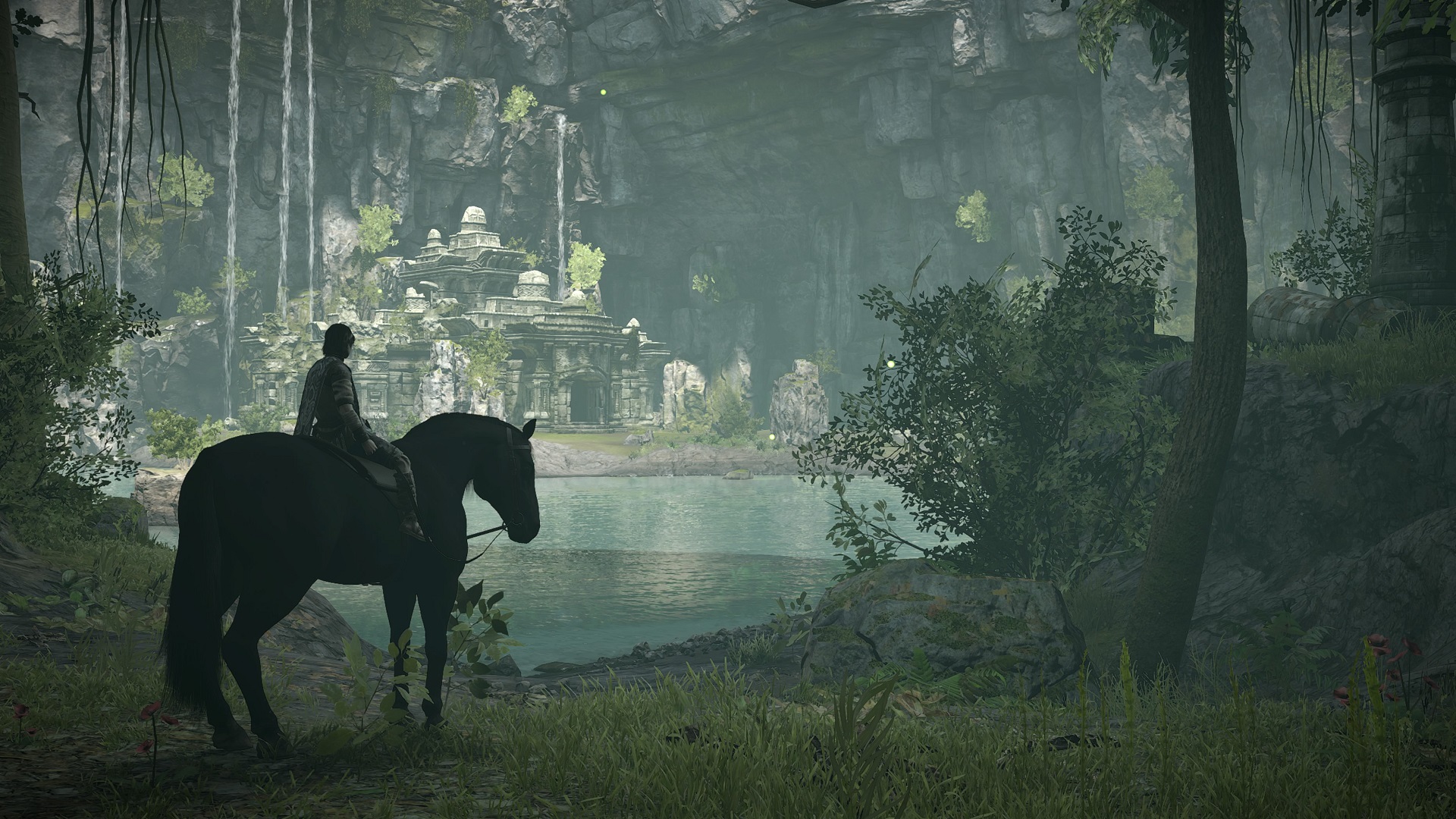 Disclaimer: the following review focuses almost entirely on this new version of Shadow of the Colossus, and the work of Bluepoint Games on remaking it rather than the story or mechanics of the game itself. If you’re new to the game I recommend playing with the bare minimum of prior knowledge, otherwise consider seeking out a review of the original

Shadow of the Colossus on the PlayStation 2 took me by surprise. Here was an open-world adventure game consisting almost entirely of a series of boss fights, that took place in a large, empty landscape with absolutely no extraneous activities or even population to speak of. On paper it just seemed like a bad idea. Luckily, as is usually the case, I was a wrong idiot. Despite the odd format and the litany of technical and control issues in its original release, I now consider it one of my favourite video game experiences of all time and feel completely safe in referring to it as a ‘masterpiece’ of the medium.

Imagine the feeling of equal parts elation and trepidation then, when it was announced at E3 2017 that Shadow of the Colossus would be getting a current-gen release in the form of a from-the-ground-up remake for the PlayStation 4. Adding to the mixing of feelings was the knowledge that this remake would not be handled by the game’s original creators Fumito Ueda and Team ICO, but instead by Bluepoint Games, a studio out of Austin, Texas whose previous work consists mostly of HD ports of notable PlayStation franchises.

Again, however, whatever fears I had about how Bluepoint would handle this task were completely misplaced. I’ve never been happier to be a wrong idiot.

Your horse vs the horse she says not to worry about

This forest is… co-luscious (I’ll see myself out)

First of all, hot damn does this game look pretty. I’ll try to avoid talking too much about the original Shadow of the Colossus for fear of boring long-time fans or spoiling anything for the uninitiated, suffice it to say that so much of the game’s timeless quality comes from its minimalist and evocative art style. Naturally then, my biggest concern going in was that having an external team come in and rebuild the entire game from scratch would serve to diminish the impact of the original art or somehow ‘AAA’ the whole thing up. What I found instead was a world so massively beautiful and painstakingly handcrafted and yet, in my humble opinion, entirely true to Ueda and his team’s initial vision. Every vast stretch of verdant land, every winding mountain path and dense forest is present and accounted for and exactly as I remember them, yet each square inch of the sizeable map is flush with rich new detail that makes the whole experience feel fresh again. The fact that I could spend hours gawking in pure wonderment at so many brand new details while still navigating the entire landscape from muscle memory is an exciting prospect and a huge achievement.

That same considered balance of adhering as much as possible to the original design while carefully laying on the trappings of a modern game extend to all facets of this remake of Shadow of the Colossus. By and large, every aspect of story, gameplay and progression here is completely authentic to the PS2 game (and by proxy the later HD port on PS3). So much so that I can still handily smash through the game in a mere couple of hours as though I was playing the original for the 20th time (fret not newbies, your first playthrough will likely be closer to the eight-hour mark). Essentially, this is the best kind of video game remake. One that rings true to the experience that fans remember, while updating it enough that it feels new again. Think less Uncharted: The Nathan Drake Collection and more Crash Bandicoot N.Sane Trilogy.

So what is new, then? Obviously, the gorgeous new presentation is the star of the show. The sprawling valleys and majestic mountains of The Forbidden Lands benefit greatly from a huge increase in detail and enormous draw distance, plus some of the most impressive lighting I’ve seen in a console game. The team at Bluepoint have gone to extraordinary lengths to inject a staggering amount of new incidental detail into each corner of the world, by hand no less, and it really pays off. The real winners here are main character Wander, his horse Agro, and the Colossi. Thanks to the fantastic new models and textures, incredible animation work and the absolutely jaw-dropping hair and fur physics, every character in Shadow of the Colossus has a physical presence that is rarely seen in the medium, mirroring the kind of effect they had way back when. Again, all of this is achieved while staying impressively faithful to the core art, preserving every bit of personality and nuance in the characters and world and every emotional beat in the story. Seeing each cutscene play out frame-for-frame in the new engine is an absolute treat. HDR support is included, and looks lovely, and PlayStation 4 Pro users also get to enjoy a choice between a dynamic 4K ‘cinematic’ presentation at 30fps, or a ‘performance mode’ that targets 60fps at 1080p. The purist in me initially stuck with the higher-res scenario, but I found quite quickly that playing in 60fps is an almost revelatory experience that somehow lends so much more weight to everything that I’ve been playing it that way since.

Of course, Bluepoint have also opted to include a few important quality-of-life changes in an effort to smooth over the experience of playing what is in essence a 12-year-old game. The most immediate difference is a new control layout that does away with a lot of the awkward button placements of the PS2 version and does a good job of making them fit into a more standard, modern layout. For purists there is also the option of changing to the original layout, though even after a couple of stumbles where my muscle memory caused me to press the wrong thing in the heat of the moment I recommend going with the much more comfortable new option. Aside from that, the HUD’s been giving a bit of a tweak to make the stamina reading a little clearer, and is now very customisable. Manual saving’s been added and there is a nice selection of concept art and comparison screenshots to unlock by playing the game’s time trials. Throw in the requisite (and very addictive) photo mode for taking beautiful screenshots and it’s a pretty decent round of updates that again echo the sentiment of updating the game without fundamentally changing it.

Oh, and there’s also a surprise new metagame that only the most thorough of explorers will uncover, housing a never-before-seen mystery that I’m super excited to see the gaming community solve.

The one aspect of this remake that may cause issue with some, especially those jumping in for the first time, is the act of controlling Wander. You’ll find most people in one of two camps when it comes to Shadow of the Colossus: those who believe that the obtuse inputs required to perform every action and Wander’s stumbling gait and the punishing climbing physics are all a part of the ‘art’, and those that think it’s all bullshit. Whatever the sentiment, the important thing is that in their effort to preserve everything that made the game what it is, Bluepoint have left everything pretty much as is. Aside from the aforementioned optional new control layout and a couple of small tweaks (it seems much easier to mount Agro from weird angles now), Wander is just as prone to stumbling around like an idiot and getting awkwardly hung up on Colossi-crevices as before. While part of me wished that the odd, stupid AI behaviour or annoying collision had been updated a little it rarely got in the way outside of the hard mode time trials, and somehow almost serves to drive home the nostalgic value of the remake.

Remakes, remasters, re-releases. Whatever the name, there seems to be no unanimous ‘right way’ to do them. Shadow of the Colossus on the PlayStation 4 opts heavily for the ‘completely authentic experience in a gorgeous new coat’ route, and absolutely nails it. Fans of the PS2 original now have the chance to relive the magic of playing the game anew, and first-time players hopefully have been given enough modern creature comforts to appreciate this masterpiece for all its undiluted quirks. Above all, the Shadow of the Colossus remake makes me think about how difficult it must be to restore a work of art while doing justice to the artist’s vision, and so I must commend Bluepoint Games on a job bloody well done. 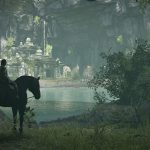 Shadow of the Colossus (Remake) Review
A Colossal Success
Bluepoint Games prove without a shadow of a doubt that they were the right choice to head up a full-blown remake of what is undoubtedly one of the greatest games ever made.
The Good
Still one of the best games of all time
Stunning new presentation
Lovingly recreated world
Ridiculously authentic
Seriously, it's beautiful
The Bad
Controls are still frustrating
9.5
Bloody Ripper

Shadow of the Colossus (Remake) Review
A Colossal Success
Bluepoint Games prove without a shadow of a doubt that they were the right choice to head up a full-blown remake of what is undoubtedly one of the greatest games ever made.
The Good
Still one of the best games of all time
Stunning new presentation
Lovingly recreated world
Ridiculously authentic
Seriously, it's beautiful
The Bad
Controls are still frustrating
9.5
Bloody Ripper
In this article:dyegb, essential gaming, fumito ueda, goat, got the platinum tho, help i still cant solve the mystery, ico, japan studio, kieron verbrugge, photo mode, PlayStation, playstation 2, PS2, ps4, PS4 Pro, pure beauty, remake, remaster, review, screenshots, Shadow of the Colossus, Sony, Team ICO