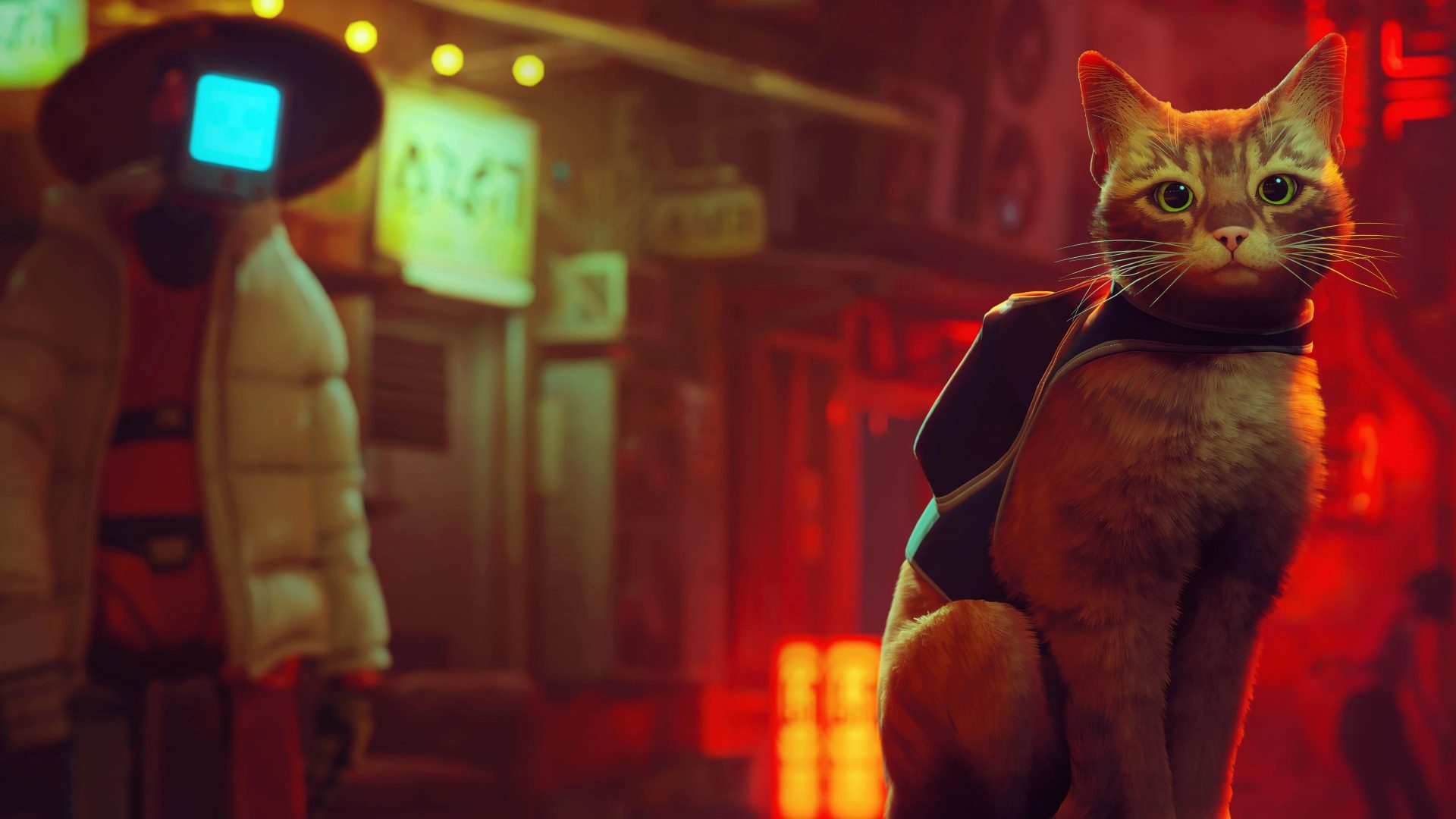 Owning a cat can be a challenge. On the one hand, you’ve got the cutest bundle of fluff known to man who has you making the weirdest sounds you never thought you would make. On the other, it can be the bringer of doom, clawing everything in sight and laying waste to your best furniture and meowing in frustration when it doesn’t get what it wants. Which makes Stray, the debut title for the French-based BlueTwelve Studio, the perfect counterpoint to owning a cat. For one, the hero of the tale won’t destroy anything in your home except your feelings (and who needs those), and two, this little adventure will take your heart and turn it inside out without you having to spend an exorbitant amount in vet bills.

Stray tells a largely simple tale of a little cat that finds itself lost amongst the dystopian ruins of an underground city, haunted by mysterious monsters and home to an assortment of unusual, artificially aware machines. Explaining too much more than that would spoil some of the more interesting story beats, but safe to say things don’t go to plan as you meet up with a little drone named B-12 who helps to guide you from one helpful friend to another in order to escape the city and find a way home.

Do kittens dream of electric mice?

As the orange-furred hero (thankfully not a Garfield reference) you will platform, puzzle solve and run through various areas of the city, aided by your drone companion who becomes a translator of sorts for the citizens of the city. How a cat would even understand the language of a drone is beyond the realms of understanding, so maybe leave that one to the imagination and pretend the drone is meowing back. Anyway, most of the puzzles involve finding the right path or item that leads to the next area, and very few will have you stumped as such.

I can tell you for a fact that my own cat would not be as easy to control as Stray’s lead hero, nor as obedient. The dev team have clearly thought long and hard about how our little hero moves and interacts with the wider environment, making it feel less like a video game character and more as you would expect from the real life equivalent. Scratching at doors to convince others to open them for you, meowing endlessly to attract enemy creatures and security droids, each little moment could have been overdone or cartoonish in nature, but ultimately feels just as a cat would and will no doubt have many players cooing with delight early on. I lost count how many times I did, especially when I found quiet spots to curl into a ball to sleep, the camera panning back as the PS5 Dual Sense controller speaker let out quiet purrs of contentment to match the scenery.

Surely this will end well

But let’s get away from the cute factor and focus a little more elsewhere, because as much as the majority of players will be interested in Stray through its promise of being a cat, the narrative itself hides a darker story of humanity’s constant need to experiment. Through the eyes of the residents of this dank, neon-drenched city, you’ll uncover how it all came to be, and much of that tale is a sombre realisation of how dangerous meddling with the unknown can be. Though most of the machinations that call this city home seem somewhat content with their lives, many are oblivious as to how they came to be, which is fascinating to discover as you slowly climb your way out.

Each area breaks up the playstyle to avoid the boredom factor, with later missions playing the Sam Fisher card as you sneak around to avoid detection, and fetch quests are nowhere near as frustrating as you might expect. Sure, some of that is negated by the fact that you’re a cat doing cat things in an adorable way, but I never felt that tinge of awkwardness when a robot asks me to find something in exchange for the item I needed. That’s also thanks to how precisely each area is designed and how simple it is to traverse, high or low. You’ll rarely fall from a great height or mistime a jump and, to be fair, that’s exactly what a cat does. Strange creatures, really.

You would be forgiven for thinking Stray is a straightforward adventure, but the sewers and out-of-bounds areas that only our heroic feline can reach tell a different tale. These areas are littered with little creatures called Zurks, which will very quickly remind you of the deadly Headcrabs from Half-Life 2 and will swarm you if you’re not careful. This leads to a few stressful moments of running and hiding, but again it never gets to a point where anger takes over as the answers to your problems are as simple as dodging at the right time. Just be prepared to be weirded out by how devilishly cute these monsters are, and don’t let up on the run button.

Stray isn’t an overly long adventure, and the dev team are more than happy to say so. My first playthrough clocked in at just over five hours with most of its secrets uncovered, another three or so hours leading to full completion with a further trophy challenge to complete the game in under two hours. Overall the length feels just about right to me, never overstaying its welcome and running at a decent pace throughout, unless you’re like me spending the first few hours jumping and scratching everywhere just for fun. A bigger budget would have likely led to the bloating trap so many other major studios fall into, too many collectibles or side quests that go nowhere, but here the story feels tight and enjoyable from start to finish. Every piece has its place, either pushing the narrative forward or expanding the world through environmental storytelling.

My one gripe from a gameplay perspective, some puzzles feel a little too easy at times. I found myself very quickly figuring out where to go next or which area to run to in order to find the item I needed. That’s a good gripe to have in the grand scheme of things, as much as I would have liked a few of the puzzles to feel a little less obvious, and I feel that some more quality ‘ah-ha’ moments and cunning in puzzle execution wouldn’t have gone…astray. It does however afford more players the opportunity to experience the game and enjoy it without feeling overwhelmed, and that can only be a positive. No doubt the team balanced the game to feel exactly that way, even during end-game portions which could have been daunting.

The overall presentation is stunning, with gorgeously dense environments plastered with paraphernalia that wouldn’t feel out of place on the set of Blade Runner, every corner another unusual piece of art to ponder, playing into the cyberpunk dystopia theme. That’s backed by an eery soundscape that Ben Burtt would be proud of, the constant scratching chatter of robots trying to live out their lives coupled with a score etched in technobabble, building an unforgettable atmosphere around you. Everything is designed to be unusual and off-putting, until the simple act of purring grounds you and you’re back to squealing again. Purrrfectly balanced, as all things should be.

All the best heroes need a good rest

Stray finds its place amongst some of the best indie titles there are, telling an elegant tale of mystery, danger and adventure through the eyes of two unlikely companions. You will feel things when you play this game, within the first few minutes alone my heart was taken by my little kitty as it tumbled into the darkness before batting a few tins of junk out of its way to reach a platform. As much as I wish I could train my own furball to do as I politely ask of it, at least I can now find solace in the enjoyment of Stray’s adventure without having to have the water bottle at the ready. 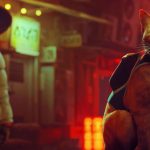 Stray Review
Nine Lives Well Spent
Stray is everything I wanted from it, an enjoyable and engaging journey across a well told tale that is every bit as cute as it is mysterious. More importantly, it made me feel empowered and brave in the face of uncertainty – I can’t remember the last time I’ve audibly cried out in delight so many times in the space of a few hours. Cuteness overload, no doubt.
The Good
Being a cat has never felt so rewarding
Richly detailed environments worthy of exploration
Narrative strikes a good balance between adorable and dark
Wonderous and energetic soundscape and musical score
Could have been longer, but ultimately strikes a solid length
The Bad
Puzzles could have been a tad more challenging
My cat will never be this fun
9
Bloody Ripper

Stray Review
Nine Lives Well Spent
Stray is everything I wanted from it, an enjoyable and engaging journey across a well told tale that is every bit as cute as it is mysterious. More importantly, it made me feel empowered and brave in the face of uncertainty – I can’t remember the last time I’ve audibly cried out in delight so many times in the space of a few hours. Cuteness overload, no doubt.
The Good
Being a cat has never felt so rewarding
Richly detailed environments worthy of exploration
Narrative strikes a good balance between adorable and dark
Wonderous and energetic soundscape and musical score
Could have been longer, but ultimately strikes a solid length
The Bad
Puzzles could have been a tad more challenging
My cat will never be this fun
9
Bloody Ripper
In this article:annapurna interactive, BlueTwelve Studio, mark isaacson, PS5, stray, Stray Review