One of those words doesn’t quite feel like it belongs. Horror games are usually a heavily curated experience, meticulously crafted to elicit particular feelings of pants-shitting terror, or gut sinking dread. Conversely the ESRB notice of ‘Game Experience May Change During Online Play’ in regards to a co-op experience usually paints a picture of the pure chaos that awaits me, as all manner of Xx_WeedToker420_xX gamer buddies await to tell me what they intend to do to my mother. Work as a unit? Suck my unit, indeed.

The Blackout Club therefore was asking a lot of my confidence going in. A game where you squad up with your teenage friends and investigate a terrifying secret beneath your cliffside town? Dodging blind cultists and a supernatural force that you can only see with your eyes closed? How on earth do you do this with other people without it descending into a giant mess. I can barely handle stealth in a solo game where I am trying my hardest, the idea of dragging three other knuckleheads along had me exhaling a deep sigh of pre-frustration.

In retrospect, I feel a bit guilty about the amount of doubt I put on the game before actually trying it – what I had read and experienced online, alongside the extremely atmospheric prologue, had cemented a feeling that none of this will work. But…it does. 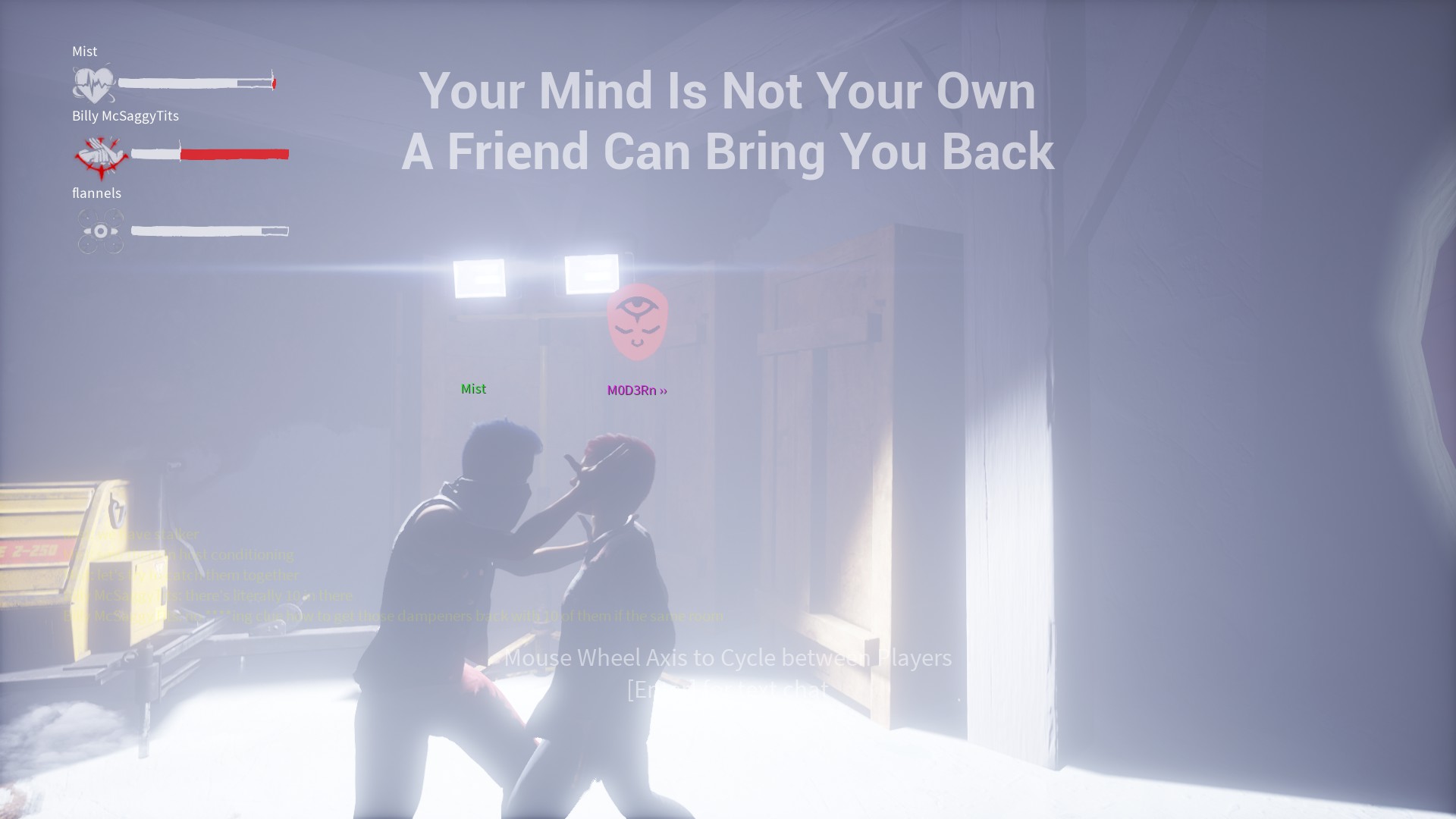 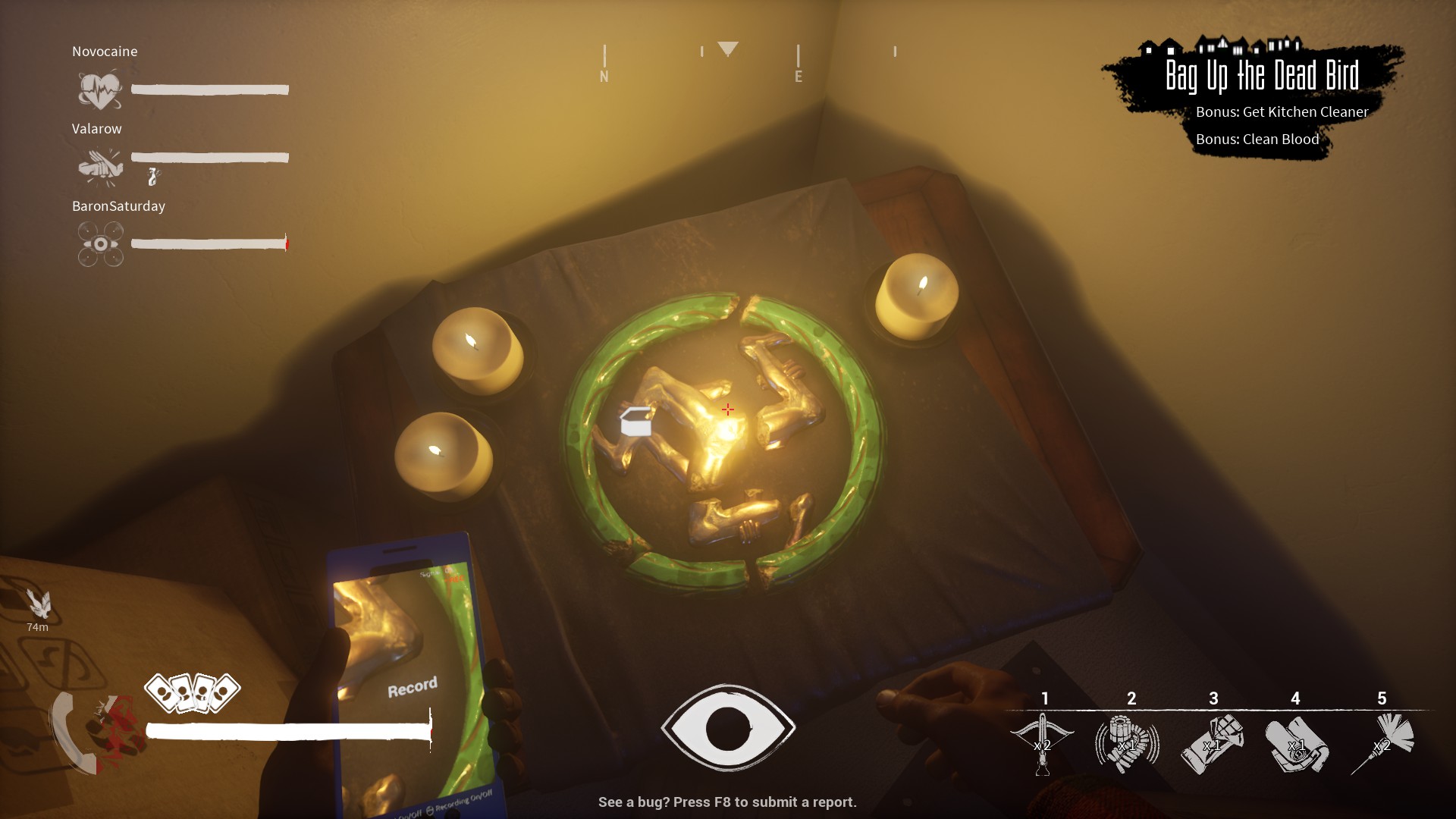 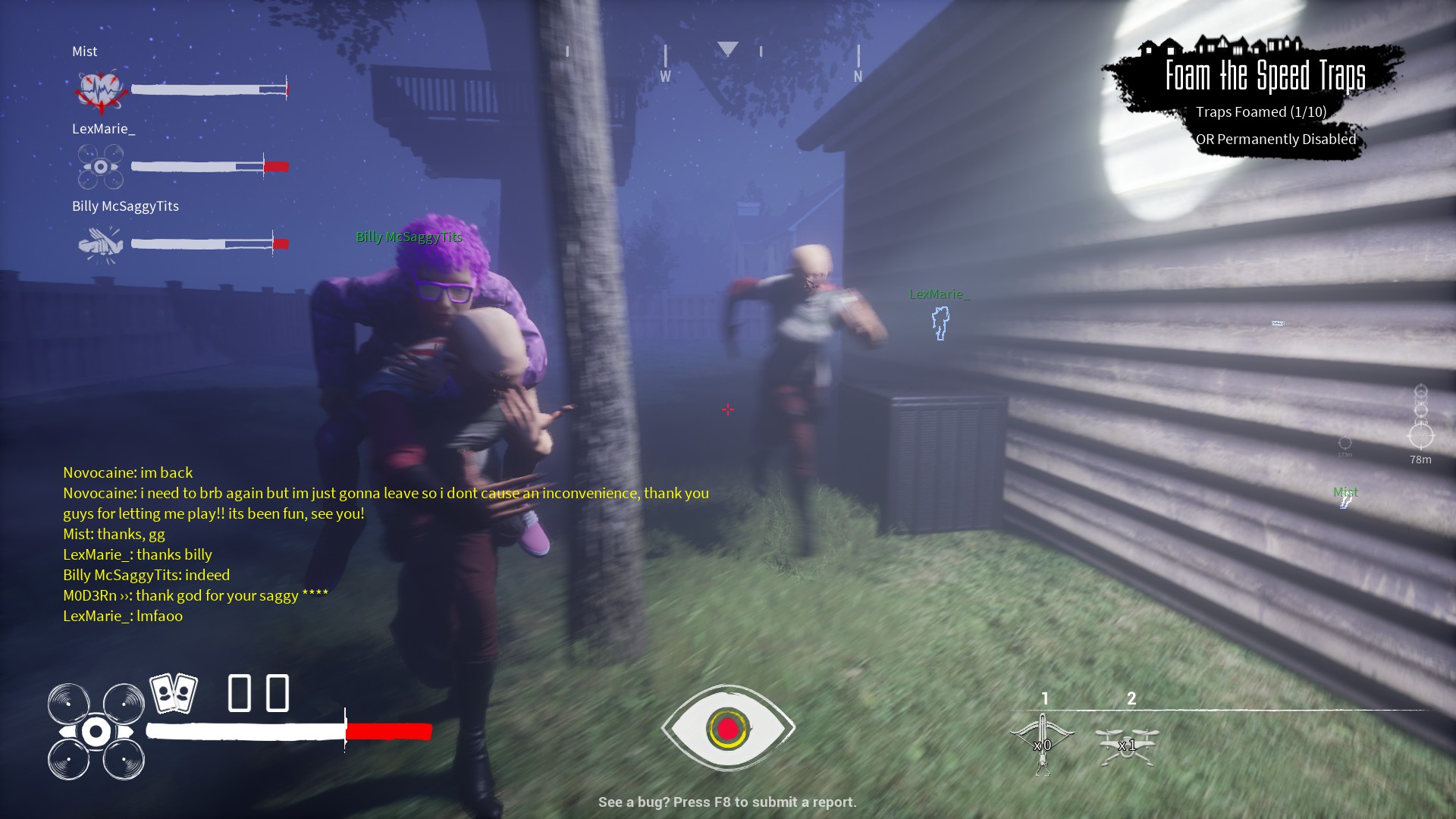 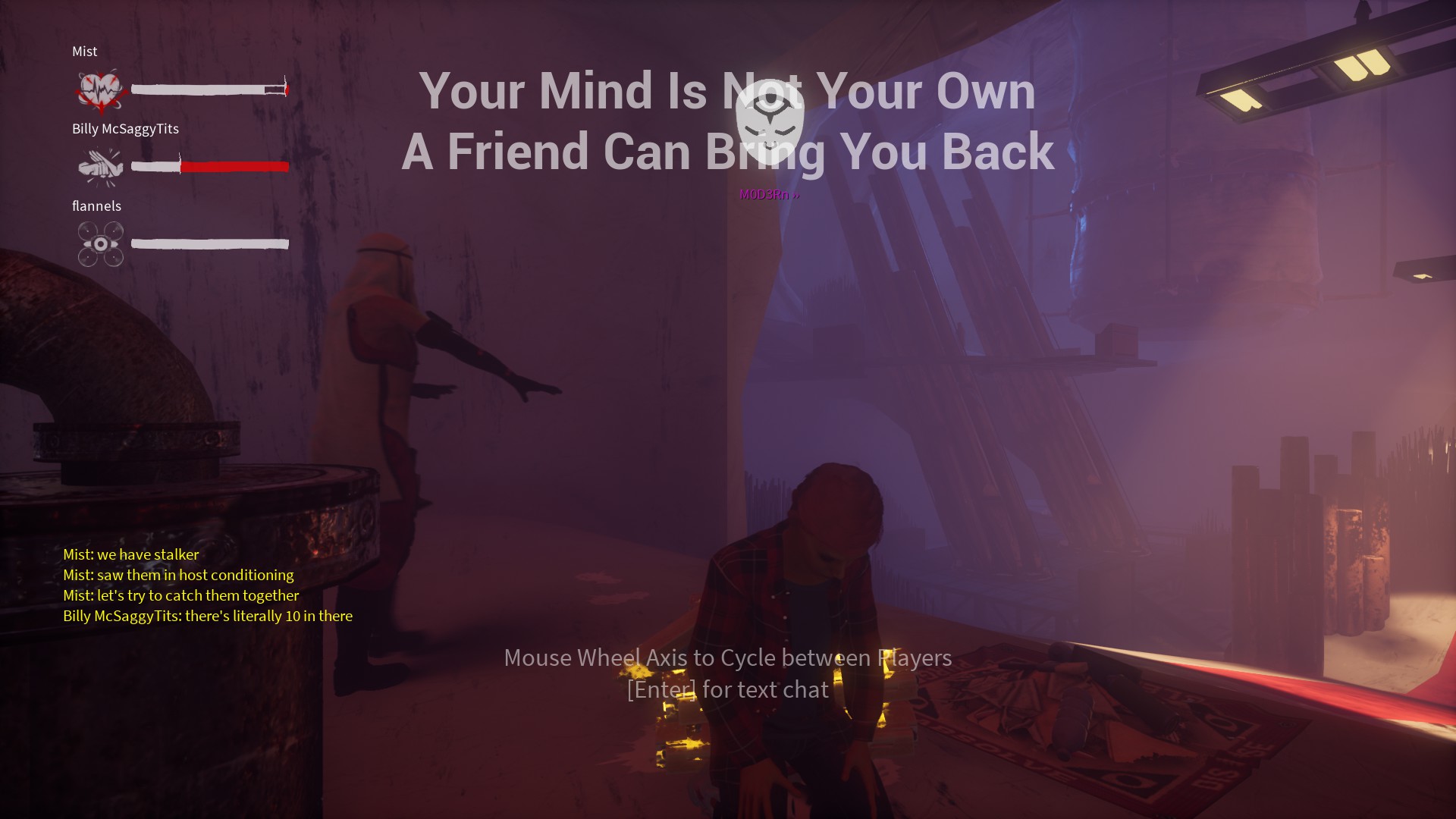 The core gameplay loop is solid – venture into your neighborhood at night and complete particular tasks set by other members of your secret cool kids club (The Blackout Club, obviously) in order to learn more about the creepy shit going on under the town, as well as try and hamper their efforts to do …whatever they are doing. A super neat mechanic in the game is that you are given a dedicated button to close your eyes, allowing you to see hidden, spooky stuff within the world. Its most common use is seeing where you need to go next, as closing your eyes will highlight footprints to your next objective location. There are other uses for closing your eyes, including a fairly critical one – but more on that later.

When I was a great deal younger, I remember sneaking out at night to visit friends and generally rebel in the safest way possible. It always felt odd seeing my childhood street look so serene and lifeless, not to mention the unnerving sense of how unnatural it all felt to be out and about in the twilight. The Blackout Club (henceforth TBC) manages to capture this experience – right up until you level up enough to have more threats in the field, when it feels a little more alive.

Initially your quiet street will be mostly empty, save for the odd Sleepwalker. Sleepwalkers act as the initial ground level threat in the game, appearing as brainwashed/sleepwalking civilians patrolling the streets for wayward kids…while wearing silky pyjamas. They function identically to the cultists that appear in the spookier sections of the game world, and put your stealth to the test as you avoid them.You do this mostly by making as little sound as possible by way of sitting still, walking slowly and even making sure you are walking on a surface that muffles footsteps – like carpet. If you want to take a more aggressive approach, you can always attempt to take them down; but in a fairly realistic depiction the developers have clearly made it that your noodly teenage arms aren’t choking anyone out. Instead, you kind of…jump on their back and batter them a bit. They will sink to the ground – then after a moment or two, get up and mutter to themselves and get back to work, wandering around listening for troubled youths. I assume their time on the ground was spent considering the shame they feel from being taken down by a kid.

There are methods to incapacitate enemies entirely, though as the items in the game are not especially plentiful you may only have a handful of opportunities to do so and you may find it a hard choice to make. Are you deep in the lair of the sinister cultists, with a key objective item and a clear sprint to get away? Better tranq dart that sucker and leg it. Broken into a house and bumped into a sleepwalker? Maybe just shove them to the floor and leap out a window – after all it will take them a while to find you, if at all. Maybe you ran into a slightly more troublesome foe – such as the Lucid. These buggers are neither asleep, nor blind; instead they are happy to whip out a flashlight and look for you a little more aggressively. Also for some reason their face is a nightmarish blur of eyes and flesh. Interestingly enough, that isn’t the most terrifying aspect of the lucid…instead, the way they casually call out for you to turn yourself in is the oddest part. Not because it’s sing-songy or sinister, they genuinely just sound like a dude on the job who is a bit over his night shift. “What are you? 10? 15? Just turn yourself in, quit hiding, C’mon.” – Creepy.

Other hazards involve fairly pedestrian stuff including proximity traps and the odd drone or security camera to avoid – these all roll out within the environment as you level up and move from mission to mission; however the most terrifying hazard is an enemy that is present from the first moment you set foot into a mission – The Shape.

What does The Shape look like? Can’t tell you.
Who does it answer to? I have no idea.
What are it’s motives? Dunno – though at a stretch I can say it aims to punish wicked kids.

The Shape is an ethereal, invisible humanoid creature that will stalk a player if they have committed too many ‘sins’. Not really in the biblical sense, more a case of being a douchebag within the game world. Smashing open locked doors, knocking out enemies and leaving their body out in the open – these are all telltale signs of a TBC Sinner, and once you have tallied a few too many the game is all too happy to sic The Shape on your ass. How do you see an invisible enemy? By closing your eyes of course.

This is a fairly huge part of the game, as all players are alerted as to who is on The Shape’s shitlist. When this happens, your friend needs to start avoiding this raging horror while trying to behave as best they can – more sins aren’t really the best reaction. The terrifying sound of it stomping around can be heard by all, and if you wish to sneak a peek at whether it’s nearby, you can close your eyes and look for its glowing silhouette. If caught, your naughty teammate will be lifted into the air and their mind taken, turning their character into an NPC that works to the enemies benefit, patrolling and alerting people nearby to your presence. You can ‘cleanse’ your friend by interacting with them, but this takes time and will be interrupted by other enemies. Once The Shape has done its duty, it will nick off for a bit and you can have a think about what to do to help your friend.

If The Shape is eluded for long enough, it will eventually change it’s form – I am not going to go into much detail on this one, it’s worth experiencing for yourself. The bottom line is; it will get a lot more aggressive in its search for you, because now it’s truly angry.

It’s actually fairly funny in retrospect, that I now realise my greatest concern for the game was players that might wish to ‘troll’ the lobby by deliberately doing all the forceful, dangerous stuff. By this end those players end up being the ones that draw the attention of The Shape, meaning there is an ideal in-universe mechanic for dealing with douchebags. If X-=WeeDLorD=-X-da-bongtoker-X wants to be a bit feral, then he will be dealt with quite swiftly, and you can choose to not intervene at all. Groovy.

One particular criticism I need to level towards The Shape is that due to its humanoid form, it does appear to use a standard set of animations. Thought it’s presence is entirely unsettling due to the building noise and on screen indicators, closing your eyes to see what appears to be a middle aged man in a polo shirt breaking into a calm jog doesn’t do much to empty my bowels.

Unless that is your particular nightmare, doesn’t do much for me.

Once you descend beneath the street, this is where TBC flexes some creative muscles and shows you the real goods. The environment within ‘The Maze’ (as it’s referred to) starts off innocuous enough. Some caverns, some shelves – who cares. You do notice there are some strangle cables running throughout, but maybe that’s something to do with it being a cavern. Delve deeper, however, and you will come to learn that the cables are part of some grand, massive instrument. As you work to complete your mission, these giant strings will be plucked deep within the earth, reverberating throughout the entire gameworld as a resonant TWONGGGGG.

Sorry texture, my on-screen indicator has other ideas

My criticisms towards the game are minor – animations can be a little jittery and unnatural, ‘mantling’ when climbing feels really discombobulating, all minor stuff that doesn’t really detract from the overall experience. My only real concern is this impending feeling of disappointment that may well find me when I realise that the rich narrative tapestry that the game has created is perhaps doomed to tread water forever as an online game. Storyline progression seems to be the native enemy of the modern multiplayer experience, because just the very concept of moving the story forward implies that part of it is henceforth to be considered ‘old’ and perhaps even redundant – why do a mission set in the past when you could be moving towards the future? The immediate plot point of your friend going missing in the prologue will never be resolved, but worse still the overall mystery of what the fuck are the creepy people doing under your town is doomed to forever vex me.

How will the game hold up? I can only speak for myself, but as someone who was deeply skeptical I can definitely attest that once I had played many many hours, and felt prepared enough to put together this review, I chose to play for a few more hours. Even now, as I write this I am considering playing some more tonight. It really comes down to how the developers continue to support it, and the sheer passion present in its current…er, ‘Shape’ fills me with confidence. Get around it.