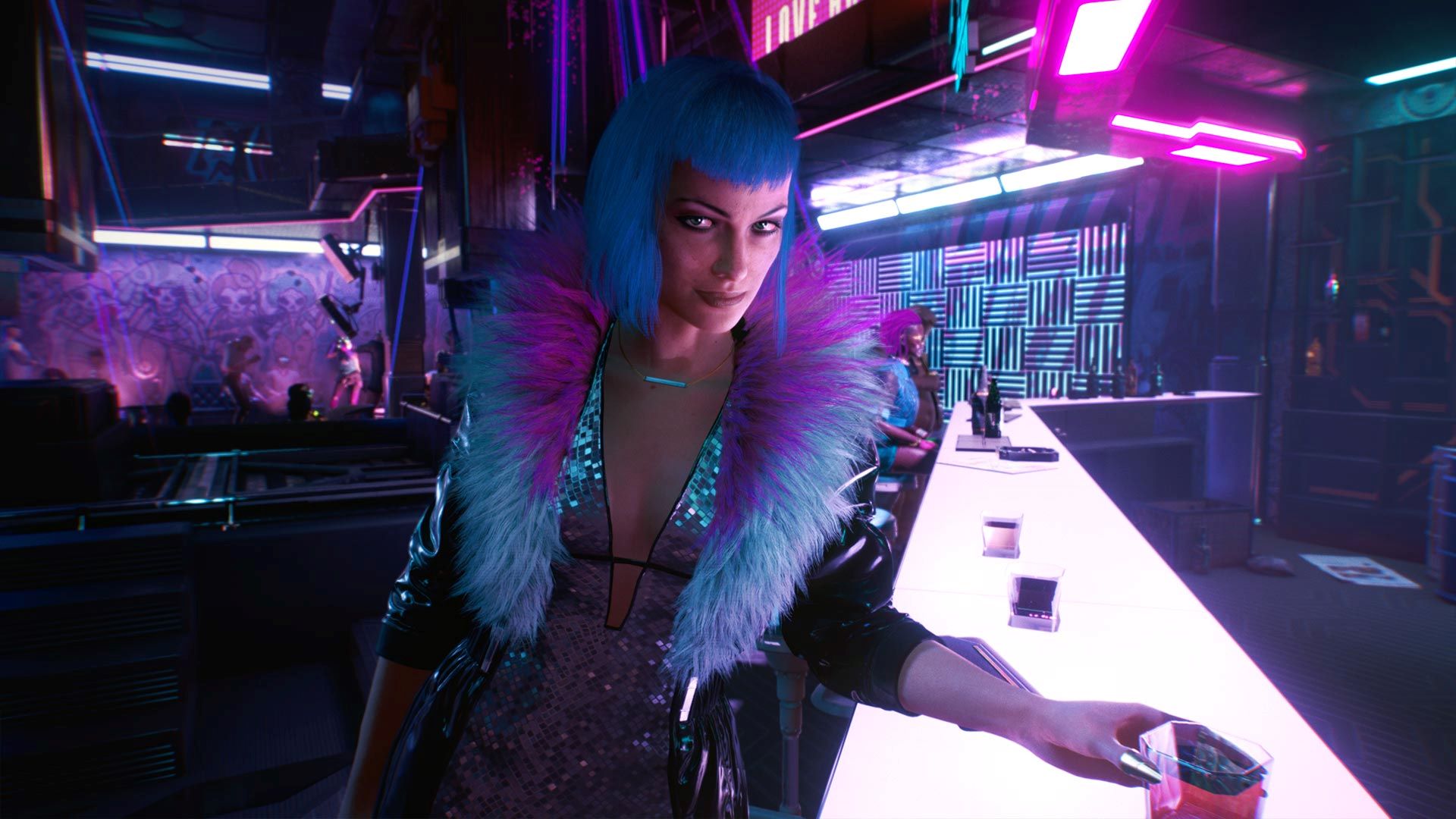 Here we are at the dawn of a new generation of home video game consoles, all of us eagerly awaiting a game from last-gen that still isn’t here yet.

Cyberpunk 2077, the highly-ambitious next project from The Witcher III: Wild Hunt developer CD Projekt Red, managed to slip into a new-gen release window by way of multiple delays, but it’s finally almost upon us. The game releases this Thursday, December 10, but the review embargo has just lifted for those outlets lucky enough to get early access and the verdict so far is very positive.

While it’ll no doubt change over the coming weeks as more outlets get hands-on and reviews-in-progress are finished up, Cyberpunk 2077 is currently sitting at a very healthy 91 on major review aggregate MetaCritic. That actually puts it just behind The Witcher III, at least on PC where these reviews have stemmed from (console codes were not available pre-launch) and where its predecessor sits on a metascore of 93.

There are (again, at time of writing) 43 reviews listed on MetaCritic, ranging from perfect 10/10s at the top-end to a low of 6/10, followed by a number of in-progress or unscored reviews. We’ve rounded up some of these reviews here, with a focus on the more ‘major’ publications as well as local Aussie content:

“It’s quite the achievement for Cyberpunk 2077 to look and sound as good as it does when one considers its size and how feature-complete it is. CD Projekt Red are world-building luminaries, a fact that was established through their work on The Witcher and reaffirmed with Night City.”

“The most important thing that everyone needs to know about Cyberpunk 2077 is that while it’s imperfect, it is without a doubt a superb game. You’ll connect with V, worry about which way the story will go and stress over the aspects of it that you can control because you’ll want only the best outcome for them. You’ll raise your eyebrows at the graphical bugs showing up in a game eight years in the making (and thrice delayed) and then quickly forget them all as you bask in the beauty of Night City; the greatest video game world ever built. You’ll feel firstly overwhelmed by the number of upgrades to consider, and then underwhelmed by their lack of necessity as you hurtle towards its end game.”

“Cyberpunk 2077 is an experience that reminds us that chatter about playtime, the number of quests, and other measures of density or length become meaningless when an open-world RPG lives up to its promise. And no matter the amount of time spent, simply existing is reason enough to visit. Much like the evocative setting of Night City, where the promise of greatness is another gig or upgrade away, we’ve still got many more hours to put before we’re ready to hit those heights.”

“In Cyberpunk 2077, CD Projekt Red has created a phenomenal tour de force and a game that’s unlikely to be matched anytime soon. It is an important game and one that demands to be played.”

“The biggest shame there, so far, is that so much is locked away so deep in the skill trees. The worry is that you’ll get too far through the story to fully enjoy even a narrow, specialised slice of what Cyberpunk offers, let alone the whole thing. For now, combat feels limited. The guns are serviceable, and melee is fun in a slightly sickening way, but very simple – think The Elder Scrolls, but even simpler: a weapon in just the one hand. The sense is I’m a good way into Cyberpunk 2077 but still waiting for its systems to really open up.

Still, they might. And its story might settle into its promising rhythm, now it’s gathering pace beyond the initial shock and awe. And Cyberpunk 2077 might also mature just a little more as a result. I’m hopeful, cautiously, of it all coming together. It’ll be quite something if it does.”

“But then it’s hard to get into Cyberpunk 2077’s world in general. So much of it is superficial set dressing, and there’s so much happening all around you–ads going off at all times, gunfights breaking out in the streets, texts coming in about cars you’ll never buy–that a lot of the game feels superfluous. The side quests and the characters they showcase are the shining beacon through the neon-soaked bleakness of Night City, and they give you room to explore the best the core RPG mechanics have to offer. These are what carried me through an otherwise disappointing experience.”

“Cyberpunk 2077 kicks you into its beautiful and dazzlingly dense cityscape with few restrictions. It offers a staggering amount of choice in how to build your character, approach quests, and confront enemies, and your decisions can have a tangible and natural-feeling impact on both the world around you and the stories of the people who inhabit it. Those stories can be emotional, funny, dark, exciting, and sometimes all of those things at once. The main quest may be shorter than expected when taken on its own and it’s not always clear what you need to do to make meaningful changes to its finale, but the multitude of side quests available almost from the start can have a surprisingly powerful effect on the options you have when you get there. It’s a shame that frustratingly frequent bugs can occasionally kill an otherwise well-set mood, but Cyberpunk 2077’s impressively flexible design makes it a truly remarkable RPG.”

“Cyberpunk 2077 is dark and disturbing at times (frighteningly so), but the majority of its content is fascinating, and loaded with depth through the various RPG systems and lore. I thoroughly enjoyed my time in Night City, and Johnny Silverhand is a great partner to see the sights with. Cyberpunk 2077 doesn’t overstay its welcome with its critical-path story, and invites players to jack in and stay for hundreds of hours of unique content should they want to. It didn’t blow me away like The Witcher 3: Wild Hunt, but is still a hell of an opening to what will hopefully be a new series.”

“And that humanity is the saving grace of this alluring yet uneven and deeply flawed game. I can’t deny that Night City wowed me with its scale, its verticality, and its sense of history. But I wish I could see people like me on its streets as something more than objects. I wish that the game’s politics were more radical. Yes, I know I shouldn’t look to a colossal game that was itself produced under exploitative labor conditions to lead the charge of anticapitalist liberation, but I wish the sparks of Johnny Silverhand’s ideological rage got to burn brighter, that Cyberpunk 2077 felt more interested in envisioning new futures than in reminiscing over bygone glories. Neither its gameplay nor its narrative can imagine the bold possibilities that I find so central to the best of cyberpunk. But what it does offer is visions of people trying to make do and get by in a world that’s trying to eat them alive, and sometimes those people get by with a little help from their friends. It’s not the revolution I hoped for, but it’s something.”

“An immersive and stunningly crafted RPG, which has raised the bar for cinematic quality in open-world games. Just be aware of the bug issues at release.”

So far, pretty unanimously positive. Most reviews seem to be praising the world of Night City with its immeasurable density and freedom of choice, as well as the sheer quality of all of its systems and visuals (a given with something of this scale). The few criticisms levelled at the game tend to centre around the number of bugs present as well as, for some, narrative and world building ideas that are more ‘edgelord’ than ‘edgy’.

All said though, it seems that those who’ve been patiently awaiting the release of Cyberpunk 2077 will be more than satisfied with the result.