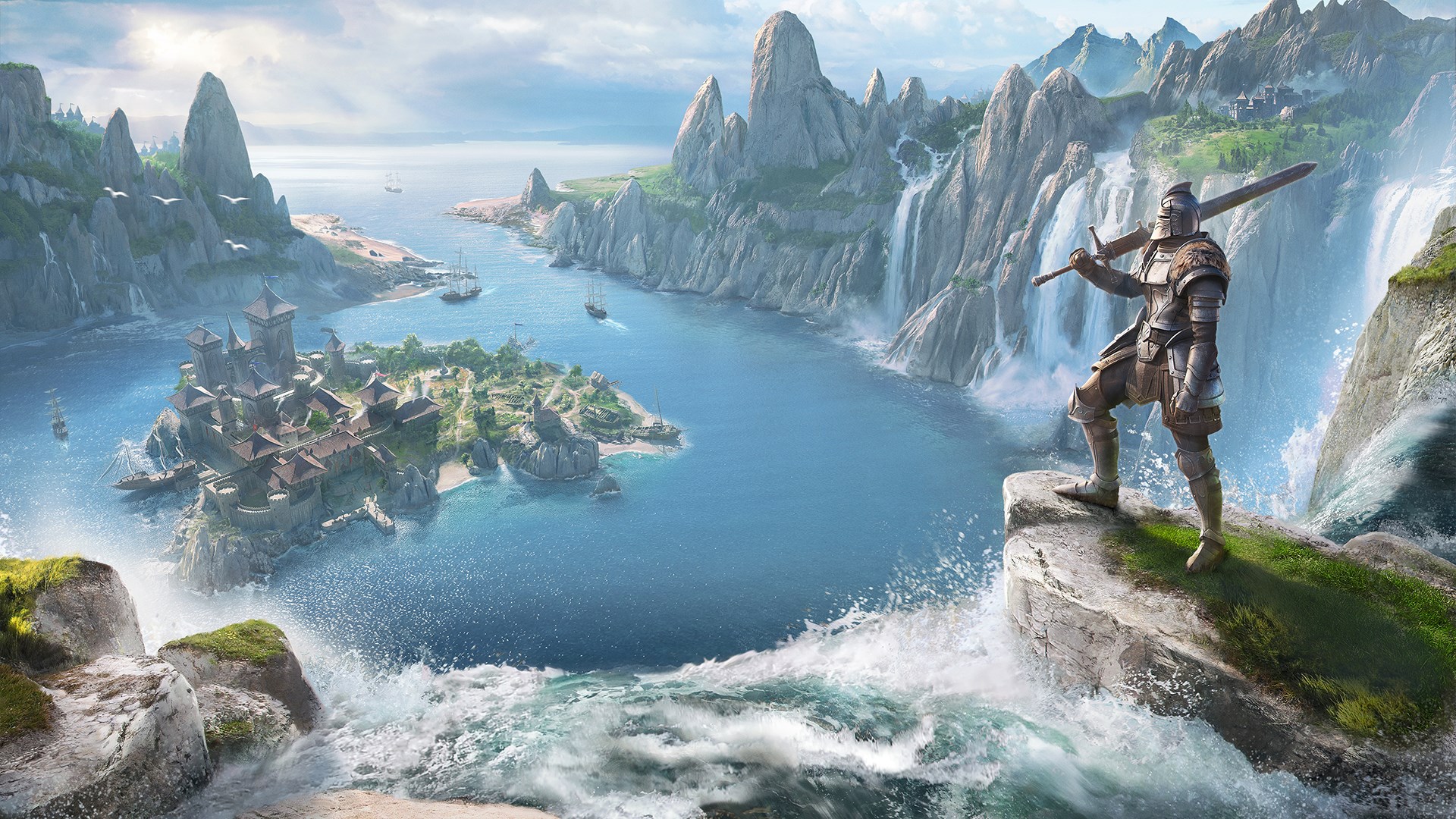 I love The Elder Scrolls. It was the series that kick started my love for RPGs, with Oblivion being the first game in the genre that I ever played. Hell, to this day, Oblivion is still one of my favourite games of all time and I always want new Elder Scrolls experiences (bring on ES6). In saying all that, I have always had a soft spot for The Elder Scrolls Online as it a great platform for exploring all of Tamriel and experiencing some of the stories that world has to offer. The latest High Isle expansion is no exception, and though it sails very familiar waters, I couldn’t help but thoroughly enjoy my time playing it.

High Isle is set on…well it’s set on High Isle, an isle off of mainland Tamriel predominantly controlled by the Bretons. You, the Vestige, find yourself in the city of Gonfalon Bay (a name which constantly reminds me of Gon Gon from the Super Monkey Ball games for some weird reason, I don’t know what to tell you) and in the acquaintance of Lady Arabelle Davaux. She is tasked with hosting a peace council between the representatives of the three major alliances – the Daggerfall Covenant, the Aldmeri Dominion, and the Ebonheart Pact. The ships that were bringing these representatives to the neutral grounds never arrived and so Lady Arabelle hires you to track them down and bring them back to safety.

I’m not going to beat around the bush. High Isle’s main quest isn’t anything to write home about. If you’ve played ESO before, chances are you’ve already been well acquainted with the quest design of the game. It never really changes much throughout the game, which is perfectly fine, but expecting otherwise might leave you disappointed. The writing that accompanies it is also nothing groundbreaking. ESO, and Elder Scrolls by extension, has always prided itself in the characters and NPCs around the world, rather than its core stories (I will die on the hill that Skyrim’s main story kind of sucks). High Isle is no different. It has quite a strong cast of characters. Whether it be new characters, or returning ones like Jakarn and High King Emeric, there is a variety of people for you to interact with, and their inclusion helps make the world feel more alive and lived in.

A lot of the characters and their dialogue is actually quite well written, but their performance and delivery is where it falls flat. Whether it be lack of emotion, or just a complete lack of pacing and timing, I found myself consistently frustrated with performance of pretty much all the cast during the course of the main High Isle questline. One of the biggest examples is during one of the biggest moments of the story, where a character is helping you defend a besieged fort. Instead of having agency or aggression in their voice and yelling the orders of attack, they talk to you as if nothing is happening. I know Bethesda games aren’t exactly known for their voice acting, in fact the opposite is what has been commonly accepted, but it would be nice if it didn’t feel like it was cutting through the emotion that was written into the dialogue. It felt like a lot of moments were ruined or undermined by a lackluster delivery which is a shame, because even though the overall story isn’t incredible, it’s interesting enough to be a good time.

One cool addition that is made with the High Isle expansion is the Tales of Tribute card game. I’m a sucker for an in-game card game to waste a stupid amount of time on – I am pretty sure I spent more time playing Gwent than the actual Witcher 3 game. Tales of Tribute is no different. As soon as I had unlocked it, I spent longer than I care to admit playing it. The game is pretty simple, though the tutorial might have you believing otherwise. In reality, due to it being so different to anything else in the game, it can seem quite daunting at first, but it just revolves around basic resource management. It definitely can be nuanced, but it’s still quite a fun, simple card game to which helps breaks the pace and monotony of the regular gameplay. If nothing else, the addition of Tales of Tribute is a welcome one and arguably one of my favourite new features.

A part of ESO that I truly adore is the ability to explore Tamriel. While there already exists games that allowed you to explore the various provinces of the land, they were self-contained and never connected these regions together (which is fair because they’re quite big). ESO allows for these various lands to be properly connected, which not only means a lot of gameplay environments but a great sense of culture and identity. If you’re keen-eyed, it is very easy to see the differences in infrastructure and architecture between all the homelands of the various races. While not strictly a homeland for the Bretons, High Isle has as much identity as the other areas of Tamriel. The city of Gonfalon Bay is as vibrant and bustling as any commercial centre ought to be. Its port is a vital piece of infrastructure for allowing trade and resource to come in and out of the isle, and its people are quirky and interesting.

Outside of the city, High Isle was still a treat to explore. While there are certainly beautiful areas that truly capture the wonderful natural environment, it is also war torn. This is without factoring in the second half of the isle; Amenos. Amenos exists as a prison, in which the notion of escape it futile, and so the environment’s vibrance and colour begin to fade as you get closer to this side of the isle. The isle goes from this warm, welcoming place to a cold, hostile environment,  and it’s this contrast that makes High Isle such a cool place to visit. This is without even getting into the random encounters you may find while you explore this area. You might find a noble who is completely lost and only has an eye for “adventure”, getting himself and his helper in trouble, or a criminal who has been captured in the wild and asks you for your help – High Isle is home to some quirky encounters that gave me that sense of confusion that Skyrim’s random encounters sometime would.

My one main complaint with High Isle has to do with how safe it all feels. This is definitely a consequence of spending so much time with Guild Wars 2 recently, but I couldn’t help but feel like more could have been done to make High Isle feel more substantial. One thing that I loved about Guild Wars 2 is that each expansion felt wholly unique, it never played it safe and as such the content was wildly varied. Sure, not every idea panned out, but I would appreciate it nonetheless for trying to find ways to make sure my experience never felt overly repetitive. High Isle just feels like more of the same, and while it’s perfectly okay for it to be this way, I personally would want expansions to feel a little more formative and less formulaic. The only other issue I had are your typical ESO technical issues. In fact, I had to restart a couple of quests because they outright just broke – thankfully you are able to abandon all quests, including main ones.

While it is far from perfect, High Isle is quite a solid expansion for The Elder Scrolls Online. The titular region is as beautiful as it is vast, and it is the stage for compelling adventures. I thoroughly enjoyed my time exploring the various caves and city this expansion has to offer. It can definitely feel like more of the same, and it doesn’t try to push its own boundaries, but if you’re a fan of ESO you’ll more than likely be a fan of High Isle. 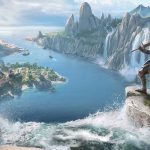 The Elder Scrolls Online: High Isle Review
Safe and Neutral
High Isle offers a number of fun, entertaining experiences. However, it focuses on mostly delivering more of the same rather than building and properly expanding on the game’s core ideas. It’s completely fine that it does this, but I just personally wish it strived to be a little more.
The Good
High Isle is a beautiful land to explore
Tales of Tribute is great fun
Main questline is decent
The Bad
Voice acting continues to leave something to be desired
The expansion is quite safe, delivering more of the same
7
Good

The Elder Scrolls Online: High Isle Review
Safe and Neutral
High Isle offers a number of fun, entertaining experiences. However, it focuses on mostly delivering more of the same rather than building and properly expanding on the game’s core ideas. It’s completely fine that it does this, but I just personally wish it strived to be a little more.
The Good
High Isle is a beautiful land to explore
Tales of Tribute is great fun
Main questline is decent
The Bad
Voice acting continues to leave something to be desired
The expansion is quite safe, delivering more of the same
7
Good
In this article:Bethesda Softworks, mmorpg, The Elder Scrolls Online, Zenimax Online Studios