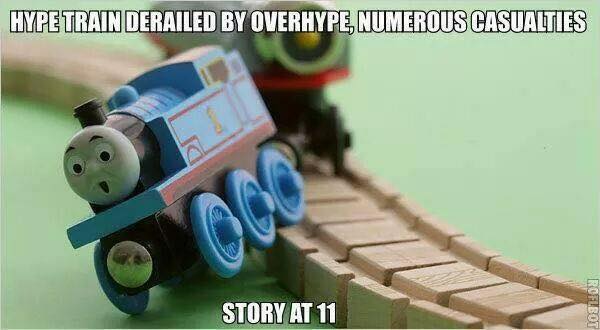 In this segment we’ll be stoking the environmentally-unfriendly coal fire that powers the hype train. The hype train is a beast made of equal parts marketing spin and vertical slice gameplay and painted crudely with the hopes and dreams of starry-eyed gamers. The hype train takes no prisoners; you are either standing on the side of the tracks staring at your shoes with a sad look on your face or you are leaning out the train’s windows yelling passionately yet incoherently at passerbys. We have all fallen victim to the hype train’s seductions at one time or another. Indeed, Bungivision managed to make hundreds of millions of dollars by simply channelling the power of the train with their title Destiny, so much so they forgot to write an actual story. But it’s not all bad and in the long run hype is a necessary element to make a game profitable. The Witcher 3 is a good example of how it can be done well, with a lot of hype surrounding the title prior to release mixed with a generous helping good faith in the seasoned developers CD Projekt Red. In the end, the product that the Polish developers delivered was simply incredible, and the ravenous masses gobbled it up gleefully.

So in this section we’ll talk about those games that we’ve pinned high hopes and expectations on, the big titles that have wooed us with a heady combination of tantalising promises and gorgeous trailers. So get on board the Hype Train, just keep your hands inside at all times and don’t talk to the weird guy up the back…

Well we are two weeks away from Destiny: The Taken King’s release date, September 15th. The hype and anticipation for this release is immense and all the details that Bungie and GameInformer have released have not helped with keeping things on the small scale of hype. Seeing as all the hype that has been circulated is spread across the four corners of the Internet, we decided to put as much of that info as we can into one article for you.

What is the premise of The Taken King?
The Taken King picks up where The Dark Below left off. Oryx, the Father of Crota, is pissed off at you for killing his son. He is coming to enact his revenge upon us Guardians and he’s bringing an army with him. Oryx possesses the ability to take people out of our dimension and fill them with his dark, evil power transforming them into the vile corruptions known as ‘The Taken.’ It is our job as Guardians to take the fight to the Hive Dreadnaught which is situated in the rings of Saturn and combat Oryx’s Taken Army there.

What is coming with The Taken King?
So with this (regrettably) $70 expansion we will get Heihachi, Devil Jin, King, Armor King, Yoshimi- oh this is the TAKEN King, not the TEKKEN King. Silly me.

Well The Taken King will ship with a bunch of new missions (easily double that of both TDB and HoW together), 3 new Strikes (4 if you’re on PlayStation), 3 new subclasses, a bunch of new trophies/achievements, new weapon foundries, the largest weapons arsenal ever seen in Destiny and a whole butt-load of new exotic weapons and armour. You will also be provided with a new patrol zone, Oyrx’s Dreadnaught. 7 new Crucible maps (8 if you are on PlayStation) are introduced alongside with 3 currently announced new Crucible gamemodes Rift, Mayhem and Zone Control. For Xbox users, all the previous PlayStation exclusives (the Hawkmoon, Monte Carlo etc…) will now be available. For PlayStation users there will be 1 new set of exclusive legendary gear for each class, an exotic scout rifle named The Jade Rabbit, an exclusive Strike named “The Echo Chamber” and an exclusive map named Sector-618. There has also been an overhaul of the levelling system. Now the level cap is 40 and to reach that level you only need to obtain XP. Light is now calculated by the average of both damage and defence stats of your weapons and armour. This change creates a gradual climb in power rather than the huge power gains when you increased in level. Exotic blueprints are included which allow for the saving of exotics which you have collected throughout your travels. This applies to both exotic weapons and armour. Ships, shaders and emblems will have ‘collections’ which memorise which ones you have and have not obtained, allowing access to them forever, much like exotic blueprints. Vault space is brought up to 72 spaces for weapons, 72 for armour and 36 for general items. Finally, there will be a new 6-player raid called “King’s Fall.”

Oryx, see what happens when you touch the stove after I told you not to?

Will there be a rebalancing of weapons?
Next week, on Tuesday September 8th Bungie will release the 2.0.0 Update. This update will bring with it a bunch of new weapon rebalances including the long-awaited nerf to the Thorn in PVP and the Gjallarhorn in PVE. There is a lot of controversy regarding this patch because people get a bit weapons whenever their anals are touched, but who cares? Hand Cannons in general are receiving a nerf to their range, handling and magazine size, Auto Rifles are receiving a buff in PVP and a secondary buff in PVE, Pulse Rifles are receiving a handling nerf in order to combat their overpowered effectiveness in PVP and Scout Rifles are basically going untouched. Shotguns with Shot Package or Rangefinder are receiving a nerf, Fusion Rifles are being put in a weird spot and Sniper Rifles with Final Round will only have the bonus damage apply to a precision hit to combat the bullet dumpers in PVP. The Grenades & Horseshoes Rocket Launcher perk is also receiving a nerf to its proximity detonation. There are also a bunch of exotic changes occurring. Expect patch notes once that update is released.


The hype train for Destiny: The Taken King is definitely on full steam ahead and does not appear to be braking anytime soon. But knowing how pretentious some people are, especially with Destiny (“people still play this game?”), there will be an uproar of people claiming that the hype train was derailed the moment this huge expansion is released. Stay tuned to DYEGB for anymore info in regards to Destiny: The Taken King or head over to Bungie’s website for any other details not discussed here. Also, on Thursday September 3rd at 4am Bungie will be hosting a Twitch stream on their channel. Destiny: The Taken King will release on September 15th for North America and what I assume to be September 16th at 3am (AEST) for Australia.