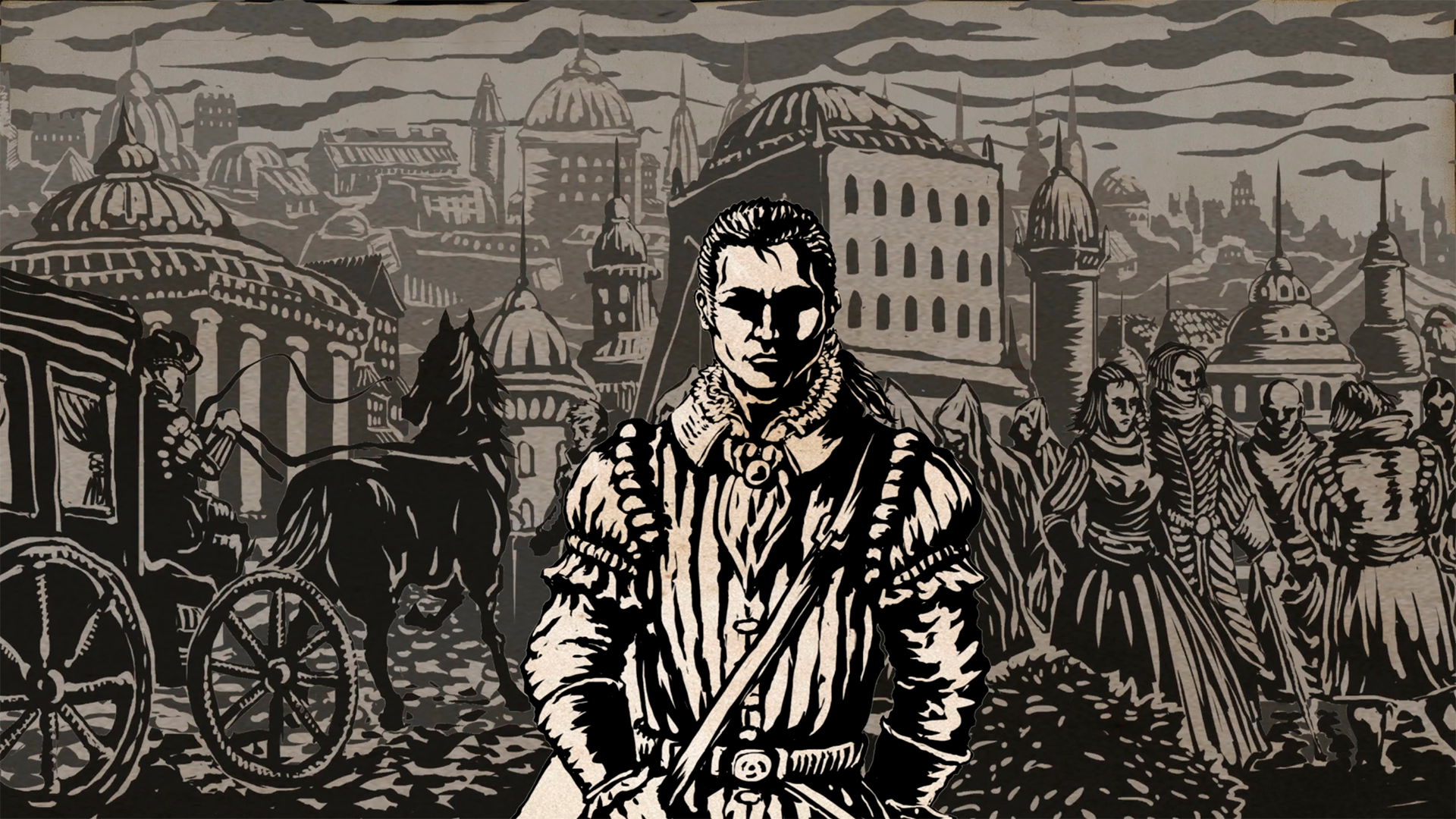 There isn’t a more thrilling source of history than the humble diary. They come with all the trials and tribulations of a personal life, along with an engrossing testimony of the past. Reading through the lives of history’s ‘Great Men’ might remain popular today (although biographies are generally read more than the raw diaries), but there’s absolutely no doubt that the diaries of the everyman and everywoman are just as powerful. In fact, some would argue – including myself – that the secret journals of the average human being are far more riveting to read and important to study. After all, any of these people could have become Great under the right circumstances. Heroes and villains are made, not born.

The Life and Suffering of Sir Brante is a choose-your-own-adventure (CYOA) game that embraces the format of the diary with a superhuman vigor. In fact, the entire game takes place inside the pages of Sir Brante’s personal diary. Through its ‘pages’, your own actions work their magic on the game’s dark fantasy version of the Reformation period. As your words and deeds leave their mark on the people around you, your effect on history likewise blossoms into Greatness…or fades into obscurity.

Comparisons to 2013’s cult classic Long Live the Queen are easy. While the similar feudalist setting is easy prey, a direct comparison between how either game uses stats isn’t as simple. Both use the players’ particular stats to determine the narrative, but The Life and Suffering of Sir Brante uses this idea in a far bolder fashion than its 2013 counterpart. It’s true that events will repeat themselves across playthroughs, but The Life and Suffering of Sir Brante’s countless branches of story make for far more than just entertaining reading.

In my first playthrough, I became quickly disillusioned with the established order of the game’s world. Its heirarchal feudal society, with its theological culture, reeked of arrogance and injustice. Its officials played with the lives of its subjects as they dined with the aristocracy. Its clergy peddled lies stacked upon lies, refined over centuries to speak power to truth. Although I may have been groomed for war as a member of the peasant class, I spent my youth sticking it to The Man and found myself murdered by my own grandfather. And then I came back.

You see, in The Life and Suffering of Sir Brante, you are granted four deaths instead of the traditional single (forever) break from mortality. Each death brings you closer to True Death – the ultimate price of bravery or foolishness. There is no return save for…well, saves. Upon a Lesser Death, you return to when you came from. Your age, your stats, your choices: Everything remains as it was, bar a new mark on your body. It will never come off.

The effect this has on gameplay is tremendous. Other CYOA games suffer due to the commitment required for a playthrough that’s doomed to fail a good deal of the time. Many of my playthroughs of Long Live the Queen were cut short due to a neglected stat, which severely restricted gameplay freedom. However, The Life and Suffering of Sir Brante’s flow is much benefited through multi-death: Playthroughs need not grind to a halt due to a simple miscalculation or a tragic misclick. You make the mistake and pay the price, but the Gods allow you a second and third chance at redemption – whatever that means to you.

After my brush with grandpa’s impatience, Sir Brante’s life took a dramatic turn for the revolutionary. I built a movement that resisted the tyrannical Empire, and even revolted against them. After doing away with those pesky royals, I found myself the ruler of a land lying in dust. I became drunk on victory and started my second playthrough, only to be struck down in execution. Being executed, by the way, results in True Death every time. It pays not to get too cocky, but thankfully the game reveals consequences of decisions by default. I ended up turning this feature off because it gave away what resulted in death.

This beam of light that always hangs in the sky is meant to be related to the Gods, but I think it’s the most convenient night light ever

But this information wouldn’t only be used to avoid death. Indeed, it could sometimes be useful to let yourself go to dark fantasy heaven every once in a blue moon. Trampled to death while saving a little girl? Worth it to become her right-hand man and left-hand lover later on. Beaten to death by your old coot of a grandfather? Useful for uniting your family against him. This darkly profitable use of death is what truly sets The Life and Suffering of Sir Brante apart from other CYOA games. But even if death is sometimes worth the penalty, True Death cannot be averted forever.

It helps that the game’s setting acknowledges multi-death, as part of the most brutal and compelling dark fantasy world this side of Dark Souls. As well as the aforementioned hierarchy and corruption, there is a brooding unrest amongst the peasant class. It’s fostered by a growing dissenting religion and their increasingly dire living situation. It is your choice to help this rebellion prosper or perish. As well as your standard diary pages, there is plenty of lore waiting to be discovered inside. There’s even a bookmark with paragraphs upon paragraphs of context and politics to drool over, if that’s your sort of thing. It’s certainly mine.

To mirror the changing world around Sir Brante, his stats will also change and merge as he grows older. Every stat in the game requires a different approach to groom, and each actually does change how the plot progresses. This is reflected in the game’s writing as well, which is both its strongest and weakest point. It’s mostly superb but can come across as too modern at times. Dialogue in particular often seems more modern-casual than the setting allows. In addition, its dedication to the diary format is vigorous but hardly disciplined. The game certainly highlights the importance of diaries in determining a more personal historical narrative, but the second-person perspective trades a potentially fascinating question about a ‘higher power’ controlling the fates of Great Men (as well as looking like an actual diary) for a more convenient approach to the player.

But that’s not enough to bring down what is ultimately a bold CYOA game with a strong setting and a compelling narrative. The Life and Suffering of Sir Brante is worth a look for anybody after a game of its kind, or even those (somehow) starved of dark fantasy worlds. Its dynamically branching story paths may contain some repeated events but it’s a real treat to experience for the first, second and third time. But as the Gods decree, you only get three chances…*

*You can play the game as many times as you want, this just sounded cool. 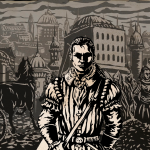 The Life and Suffering of Sir Brante Review
Regicide Is Awesome
The Life and Suffering of Sir Brante hits all the right notes of a choose-your-own-adventure game, with just enough of its own spin to stand out from the crowd. A dark fantasy world rife with pseudo-historical politics and tensions are just the icing on the cake.
The Good
Dynamic and interesting story and paths
Rich world
Multi-death is an excellent idea
The Bad
Dialogue can sometimes detatch you from the experience
Missed opportunity for tru-diary gameplay
7.5
Good

The Life and Suffering of Sir Brante Review
Regicide Is Awesome
The Life and Suffering of Sir Brante hits all the right notes of a choose-your-own-adventure game, with just enough of its own spin to stand out from the crowd. A dark fantasy world rife with pseudo-historical politics and tensions are just the icing on the cake.
The Good
Dynamic and interesting story and paths
Rich world
Multi-death is an excellent idea
The Bad
Dialogue can sometimes detatch you from the experience
Missed opportunity for tru-diary gameplay
7.5
Good
In this article:101xp, 2021, Aza Hudson, life and suffering, pc, review, sever, sir brante