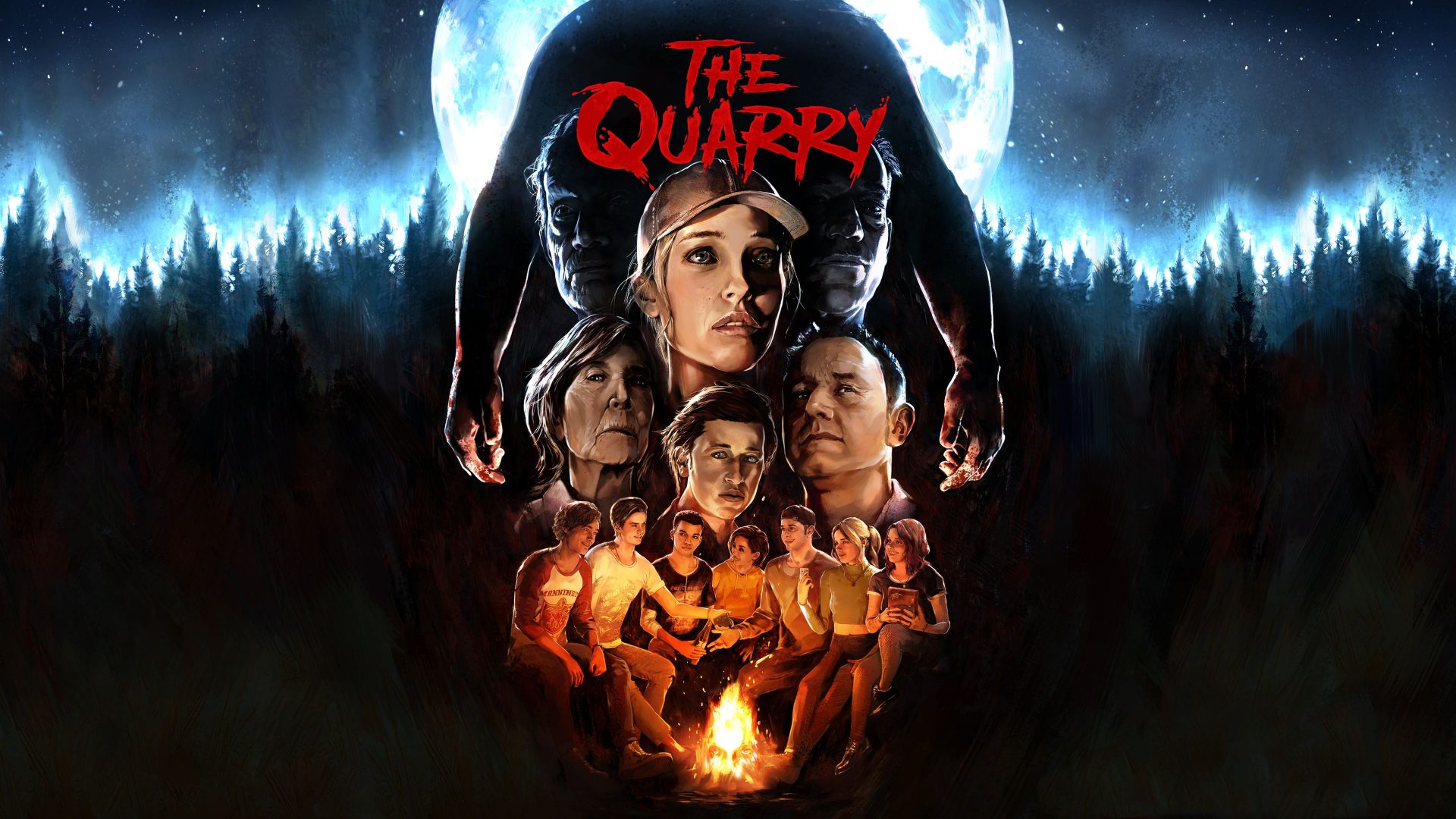 Seven years ago, British studio Supermassive Games released the popular cinematic horror game Until Dawn, an experience that fused Quantic Dream-style cinematic gameplay with a campy teen horror backdrop. It’s a path they’ve continued to walk since then, spending the past few years on their Dark Pictures Anthology, which strayed from the studio’s campy horror blueprint with its latest entry House of Ashes, before pivoting back to it with The Quarry, a spiritual successor to Until Dawn. But does it live up to and surpass the expectations set by the 2015 title or does it live in its shadow?

The Quarry is set in modern day America at the summer camp of Hackett’s Quarry, where a group of teenage counsellors have been forced to spend one more night at the camp due to car failure. This causes camp leader Chris Hackett (played by David Arquette) to go into crisis mode and speed off, promising to return in the morning to fix the car and send the kids on their way, but not before pleading with the teens to stay inside.

The calm before the storm

Now if you’ve ever been a teenager, you’ll know the temptation to do the opposite of what you’re told is usually too strong, and as such the teens decide to have one last epic bonfire party. Naturally, the kids should have listened to David Arquette (I mean that guy has seen some shit), and things take a turn for the worst when two characters are attacked in the woods by an unknown creature. But that’s not the only thing lurking in the woods, with hunters stalking the woods and the campgrounds, giving the teens something else to watch out for as they attempt to survive the night while gaining some level of understanding as to what is happening.

Supermassive absolutely nails the brief they had for this game, and right from the start it feels like you’re playing a teen horror film from the 80s and 90s. Visually it plays the part too, with the atmosphere helping amplify the tension and creepiness of your surroundings. If you really want to make it feel like the 80s, you can enable a VHS filter, which is pretty neat, and there are other filters you can use as well. For the most part, the graphics are very good and the mocap is excellent, although some of the character models do look a bit whack occasionally.

With so many moving parts, it would be easy for the story to crumble under the weight of its ambitions. However, the narrative is quite enjoyable and chock-full of tropes which made for compelling viewing. Even the twist is decent. Supermassive has done a great job with the writing, and whether it’s summer love or just teen drama, it all feels relatable and makes the characters feel grounded.

When your game has a long list of Hollywood talent such as Brenda Song (Kaitlin), Justice Smith (Ryan), Australian Evan Evagora (Nick), Ariel Winter (Abigail), Zach Tinker (Jacob), and more, the performances better be top notch. Fortunately for Supermassive Games, the return on investment is excellent voice acting from the cast, all of whom bring their characters to life in a way that helps sell the story even more.

If only they knew what was the future holds

The core gameplay loop is pretty much what you’ve come to expect from Supermassive Games. As you progress, the game will switch between the characters, where the player will have to make decisions, some that are timed, that will affect relationships with other characters, and how the story unfolds and the events that follow.

The first half of the game can feel quite slow at times, but the back half of the game ramps things up and is where the tension rises to impressive levels. It’s here players will need to make more significant decisions that can easily affect the narrative or kill someone, and I’ll be honest, some decisions are not easily made, which is perhaps the best part, as sometimes you just have to go with your gut instead of overthinking it. The only downside is that depending on your choices, the finale can feel a bit weak in the context of what you’ve endured throughout the night.

There’s no shortage of outcomes either, with Supermassive promising 186 different possible endings. It means that no two playthroughs should ever be the same. What was disappointing was that some choices appeared to be redundant, resulting in almost identical outcomes. It makes me wonder how different the endings could be or is it simply a combination of which characters survive or die?

Although The Quarry follows Supermassive’s blueprint fairly tightly, there have been some minor adjustments to the formula. This time around QTEs are more forgiving on the default settings, only utilising the left thumbstick of the controller (push up, down etc.). You can choose to make them more challenging should you wish. In fact, there are a ton of accessibility options that players can play around with to make the experience more enjoyable or comfortable. The other change is that instead of the heartbeat mini-game, players will need to hold their breath for an extended time (until it’s safe) by holding a button.

Much like the studio’s previous games, The Quarry contains interludes of sorts where the player will be aided by a mysterious character known as Eliza. Tarot cards are scattered throughout the game, collecting them will see Eliza give a brief insight into what could lie ahead.

One of The Quarry’s new features is the Death Rewind mechanic, which allows players to rewind time whenever a character dies to try and ensure the character lives. Players will get three of these to use, and I am ashamed to admit that I used all three during my playthrough because you should live with the choices you make. In the end I lost two main characters and multiple secondary characters, so I didn’t make it through unscathed.

However, there’s a catch. If you choose to activate the Death Rewind, there is potential that the game could take you back a fair way to where the crucial decision that led to that death was made. The Death Rewind mechanic is not included from the get-go with the Standard Edition of the game, instead it’s unlocked after your first playthrough. It is available to players who slip 2K a few more dollars and purchase the Deluxe Bonus Content Pack, or the Deluxe Edition, something I wasn’t aware of until after rolling credits. For transparency, my review code came with instant access to the Death Rewind ability, however I would recommend playing without it first as it adds to the tension. Plus, this is a teen horror film after all – people are meant to die.

The atmosphere is excellent

Perhaps the only other knock on the gameplay is that the fixed camera angles can make the controls feel finicky and awkward at times. It’s something that all Supermassive titles have been a victim of and while The Quarry shows improvement, it’s still an area the studio will need to keep refining.

Supermassive Games’ experiences have become to video games what Goosebumps books were to kids growing up in the 90s. They’re fun, a little creepy, not too long and often hard to put down. In a lot of ways, The Quarry is the studio’s best work, certainly it’s the most rounded, however it doesn’t feel like a step up from Until Dawn, and maybe that’s the ceiling these games have. But in saying that, The Quarry is a great time and one that fans of Until Dawn will love. 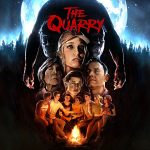 The Quarry Review
Welcome To Camp Nightmare
With a stellar cast, compelling story and a ton of replayability, The Quarry is a love letter to 80s and 90s teen horror that makes for a cracking and tense time.
The Good
Excellent voice acting that brings the characters to life
Quality writing that heightens the story
Tense and compelling gameplay
Good replayability
The Bad
Camera angles can make controls awkward
Death Rewind mechanic isn't available from start unless you pay more money
8
Get Around It

The Quarry Review
Welcome To Camp Nightmare
With a stellar cast, compelling story and a ton of replayability, The Quarry is a love letter to 80s and 90s teen horror that makes for a cracking and tense time.
The Good
Excellent voice acting that brings the characters to life
Quality writing that heightens the story
Tense and compelling gameplay
Good replayability
The Bad
Camera angles can make controls awkward
Death Rewind mechanic isn't available from start unless you pay more money
8
Get Around It
In this article:2K, david arquette, Supermassive Games, The Quarry, Until Dawn