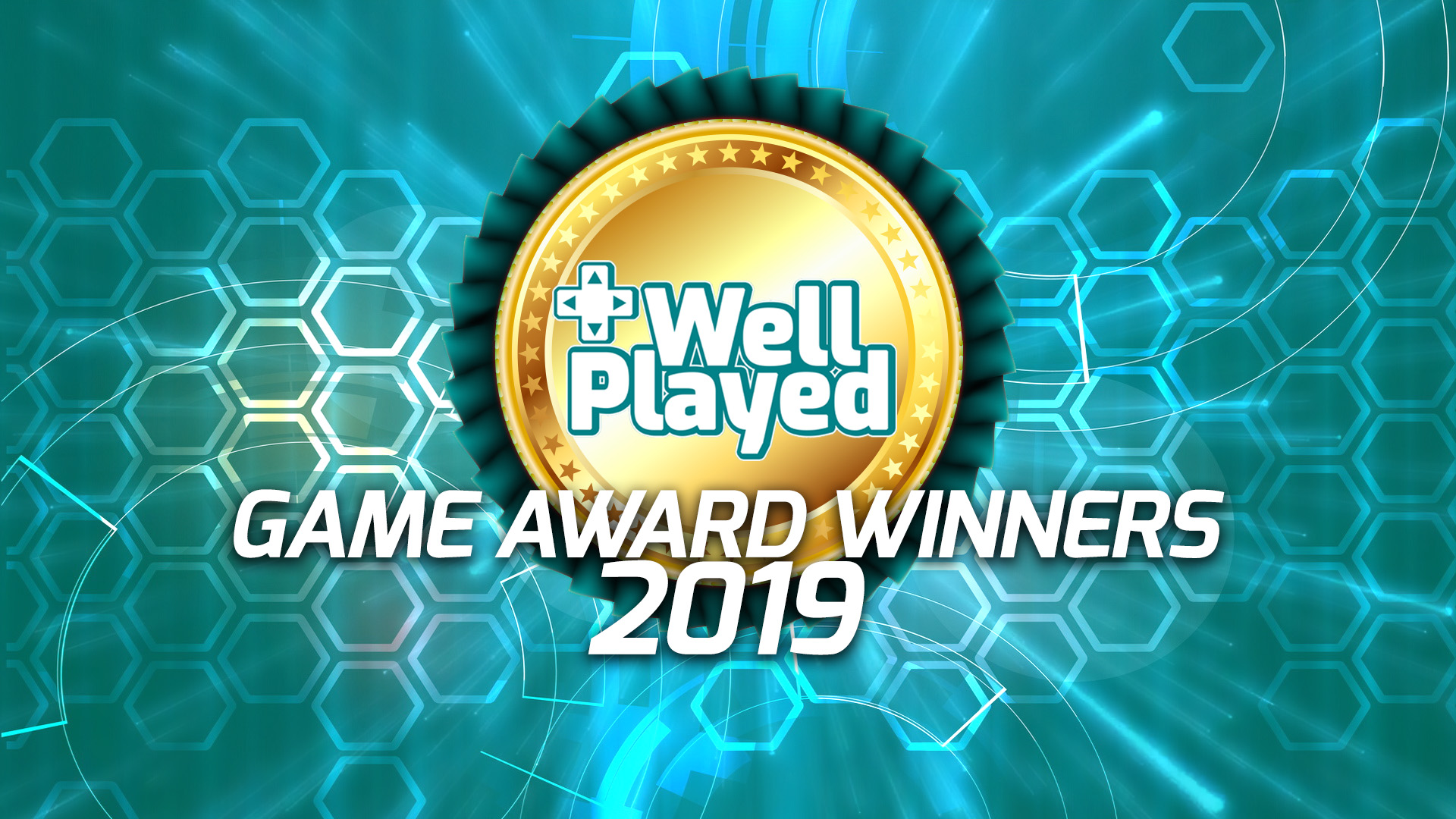 It’s award season, and after a couple years of FOMO we decided to come together and vote for the games that made us the tighest in the jorts this year over a number of categories in the first ever WellPlayed Game Awards.

On the surface 2019 feels like it wasn’t laden with as many quality titles as we’ve been treated to in recent years, however looking deeper at 2019’s roster of releases there has been more than enough quality games to satisfy tastes of all styles.

In what was a foolproof 3-2-1 voting system, where people gave three votes to their number one choice, two votes to their second and so on (see? Foolproof). Votes were tallied up and winners were revealed. You can view the winner’s list below.

When you vow to remake an iconic classic that fans had been begging for the pressure is on to do the source material justice. Thankfully, Capcom proved that they were more than up to the task, delivering a modern reimagining of Resident Evil 2 that will go down as one of the games of the generation. It takes everything that made the original a landmark title and makes it scarier, harder and more gory – setting a standard for how remakes should be done (it’s not Capcom’s first rodeo after all). A contentious decision in the WellPlayed office given it’s a ‘remake’, but the voters have spoken and Leon Kennedy and Claire Redfield’s Raccoon City nightmare is a worthy winner.

Capcom’s revamped Resident Evil 2 not only sets a new standard for the survival horror genre, it redefines and remasters it

Thinking of all the games that released this year it’s hard to think of a game that had more of a cultural impact than Melbourne-based House House’s Untitled Goose Game. The game has become a phenomenon, with critics and players praising the game’s jovial yet menacing gameplay – even Blink 182 frontman Mark Hoppus gave the goose a shoutout. With so many amazing indies released each year it feels unfair to label only one the best of the bunch, but alas it’s the way it must be and no other game had the honk, attitude and general fun factor that Untitled Goose Game provided.

Getting in trouble and annoying humans has never been so much fun, with Untitled Goose Game providing a guilt-free, honking-ly good time that is sure to make you laugh both happily and evilly

Runners Up: Ape Out, My Friend Pedro

When Respawn Entertainment and EA surprise dropped Apex Legends back in February it took the multiplayer scene – both general and competitive – by storm. Theorists prophesied the end of Fortnite’s reign as the number-one battle royale game, and while initially Apex Legends took a sizeable chunk of Fortnite’s player and viewerbase, it stabilised into being a solid and slick multiplayer title. It might be the fact that everyone at WellPlayed is over the age of 12 but Fortnite barely got a sniff in the voting. Instead, just like its release, Apex Legends came out of nowhere to take the crown.

Runners Up: The Division 2, Destiny 2

In the discourse leading up to the release of Kojima Productions’ debut project, one question came up among fans and critics more than any other – just what the hell is Death Stranding even about? Now that Death Stranding is out, the answer to that question is actually a lot simpler than anyone had expected from the eccentric video game auteur. Forgoing the overly complex, interwoven storylines and constant red herrings of the Metal Gear Solid series, Kojima has done away with ‘mind-numbingly confusing’ in favour of ‘just a bit weird, really’. Logical leaps of faith and a penchant for style over substance aside, Death Stranding’s biggest triumph is in the way it evokes feelings through gameplay. Though the chore of being a post-apocalyptic postie certainly isn’t to everyone’s taste, there’s no denying that protagonist Sam Porter Bridges’ struggles and the state of the world are felt through every facet of player interaction. Call it wank if you will, but Kojima-san is a storyteller through and through.

An incredibly unique title that takes chances we don’t often see on a AAA scale, Death Stranding is gorgeous, somber and intriguing, underpinned by a motif of human connection despite largely revolving around fetch quests and traversal

When you think of all the new ideas and properties that came to fruition this year, FromSoftware’s action-adventure game is a cut above the rest. Critics and fans alike were all in agreeance that Sekiro: Shadows Die Twice is one of the best experience that FromSoft has ever put out. A combination of superb combat, incredible art, clever writing, memorable bosses and great music all made one of the most unforgettable new IPs around. Though Miyazaki is known for one and done games, another game in the Sekiro world would always be welcome.

Each year it becomes harder and harder for games to stand out, however there are always a handful of indie titles who push the boundaries of visual creativity, putting their names on the map in the process. Trüberbrook from German developer btf is one of those games, and what it lacks in length and puzzle difficulty, it more than makes up for with its beautiful handcrafted environments. You see each location in Trüberbrook is literally handmade, with each setting a miniature diorama that has been digitised. It takes an abundance of time and effort to make these locations look as good as they do, and the hard work paid off because the art style is truly something special.

Trüberbrook’s backgrounds are all miniature dioramas that have been digitised with photogrammetry, creating a visual style that could best be described as timeless

Naysayers will call Death Stranding the epitome of a walking simulator – and it is – but that’s far from a bad thing. Like the ‘deconstructed ham and cheese toastie’ at my local Melbourne hipster cafe, Kojima Productions has taken something expected and unquestioned and laid it bare, putting the onus of responsibility squarely on its audience. It’s all too easy to label the bulk of this game’s activities as fetch quests, but to do so would be to say that the destination is more important than the journey. Sure, it’s a stretch to call spending half an hour hobbling from one end of a sparse map to the other while being bullied by terrorists and ghosts ‘fun’, but it sure as hell can be compelling, if you let it. That’s the beauty of the thing – Sam Porter Bridges isn’t a hero, he’s a guy doing his job. And just like yours and mine, a job is entirely what you make of it.

By delivering aid, supplies and connecting settlements to the Chiral Network you are essentially bringing the world closer together in a time when it is in pieces. For this reason I found a sense of ownership and importance to what I was doing

For horror games there is almost nothing more important than having an atmosphere that creates tension and trepidation. A big part of this comes from a game’s sound design, and Resident Evil 2’s soundscape is about unsettling as it gets. Utilising binaural technology, the atmosphere creates an immersive audio nightmare (in a good way), which only serves to heighten the overall experience. Furthermore, if you want to kick it old school you can switch between to the original soundtrack for a true nostalgic playthrough.

Best experienced with headphones, the 360-degree audio sensory experience will ensure you hear zombies groan, feast and stalk the hallways of the iconic Raccoon City Police Department and other monster-infested locations

Let’s not beat around the bush – we all know that out of every performance in Death Stranding (and the many other deserving games), the WellPlayed team only chose Norman Reedus because the baby wasn’t eligible. To be fair to ‘ol Norm, he carries the literal and metaphorical weight of Kojima’s heady vision with the same aplomb as his in-game avatar. Sure, Mads Mikkelsen does a stellar job in his role in the game, and even the non-actors among the cast like Del Toro and Winding-Refn seriously impress. It’s just hard to top the kind of grounded, skilful performance required to pull off an emo Postman Pat whose best friend is a baby in a jar without making it weird. I mean it’s still pretty weird, but, you get me.

An incredibly unique title that takes chances we don’t often see on a AAA scale, Death Stranding is gorgeous, somber and intriguing, underpinned by a motif of human connection despite largely revolving around fetch quests and traversal

Runners Up: Laura Bailey (as Kait Diaz in Gears 5), Mads Mikkelsen (as Cliff in Death Stranding)

Over the past few years Australian developers have released some of the best indie experiences, but no game has captivated the hearts and minds of gamers quite like Untitled Goose Game. The game’s concept may have been born from a Slack-group joke, but Goose Game emphasises how it doesn’t matter how simple a game’s premise is as long as it’s fun.

In this game I have stolen, honked, trapped people inside of things, completed human’s chores in goosey ways, switcheroo-ed and broken more things than I ever have before and I greatly enjoyed waddling through every minute of it

So there we have it, the first ever WellPlayed Awards winners. How did we do? Anything we got wrong in your opinion? Let us know in the comments or on social media.