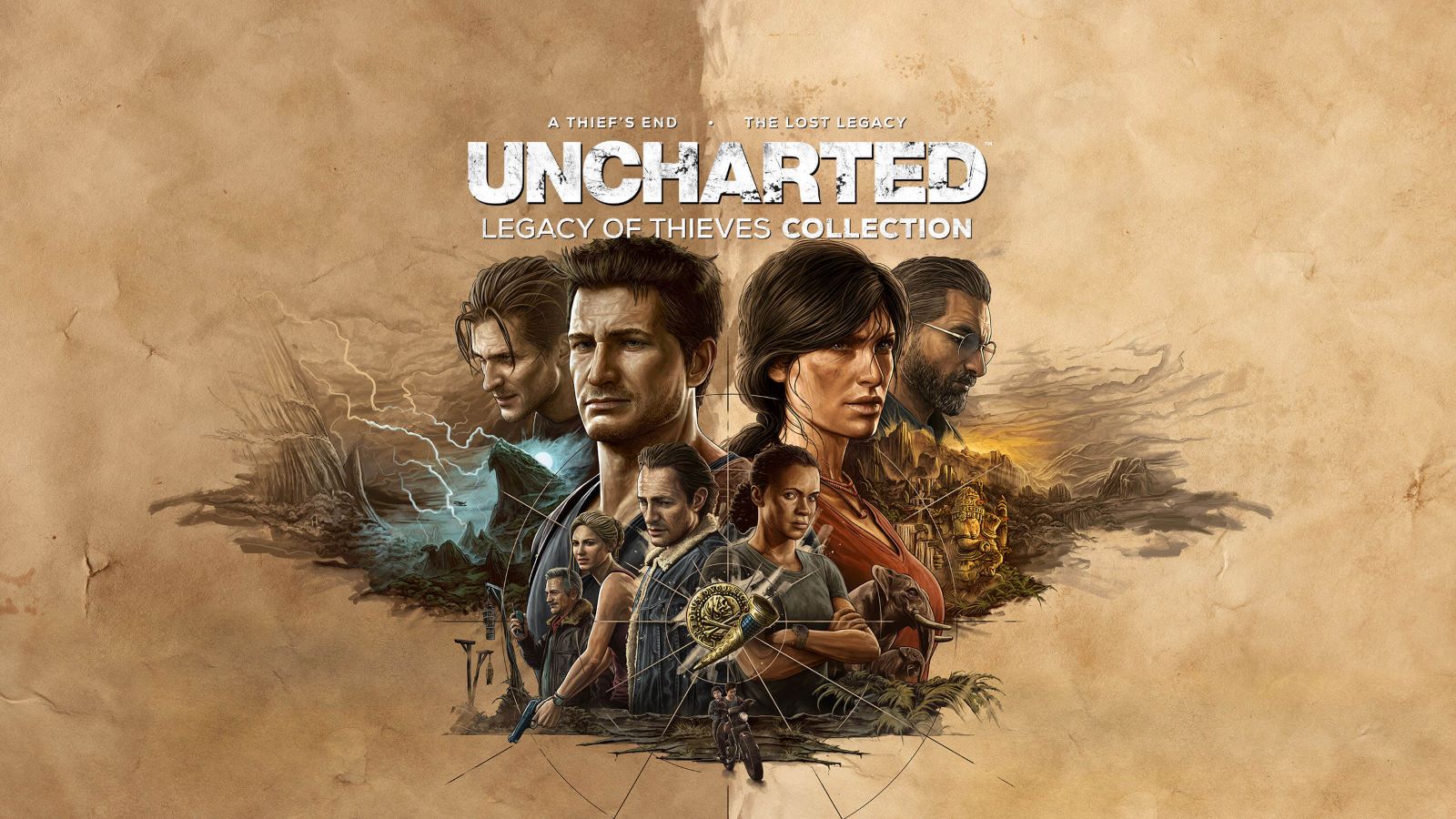 PlayStation has spent a good portion of the first year and a bit of the PlayStation 5’s life cycle bringing some of its most notable last-gen titles across to the new system. It’s done this in multiple ways – some games such as Ghost of Tsushima and Death Stranding have received brand-new native PS5 versions with added features, new content and improved visuals. Others, like Horizon Zero Dawn, The Last of Us Part II and God of War have seen free updates to the PS4 editions that enable faster frame rates on the newer hardware.

The Uncharted: Legacy of Thieves Collection, a packaging of the PS4’s Uncharted 4: A Thief’s End and Uncharted: Lost Legacy, straddles an interesting middle ground in that it’s a new, native PS5 app that adds a scant few enhancements outside of what you’d expect from a simple update. While I’ll elaborate more on that in a bit, it’s worth noting that I’m not going to touch too much on the actual content of either of the games included here. We’ve reviewed both here at WellPlayed in the last and I’d tend to agree with what our reviewers, Zach Jackson and Kieran Stockton respectively, had to say about them the first time around. We gave Uncharted 4 an 8/10 in our original review and said:

“Uncharted 4 is a good game for fans of Hollywood-esque action-adventure blockbusters. It has huge set pieces, excellent production in both sound and visuals, and its premise is an intriguing take on a historical figure’s escapades. Despite some repetitive gameplay moments, there’s no denying that it is fun to play. But while it ticks a lot of boxes, the game does suffer from some pacing issues both at the beginning and the end of the game which hurts the momentum somewhat, but it’s certainly not enough to ruin the fun. At the end of the day, Uncharted 4 gives fans a safe and fitting farewell in Nathan Drake’s final chapter.“

Meanwhile, Lost Legacy’s small forays into reactive level design, short and sharp runtime and infinitely more likeable leads make it a series favourite for me, but I’ll leave it to the conclusion of our original 8/10 review for a second opinion:

“Uncharted: The Lost Legacy is a more than competent continuation of the franchise, and Chloe and Nadine confidently carry yet another tale of high adventure in a beautifully realised Indian setting. It’s a pity that no real effort was taken to innovate on the Uncharted formula, but fans of the franchise will likely just be happy to be back on a Naughty Dog adventure.”

About these new versions, though – what you’re getting here is both games slapped together into a new launcher with a smattering of upgrades exclusive to their PS5 iterations. Content-wise, they’re essentially a match (save the omission of multiplayer in UC4) but they’ve each had a number of new visual modes added as well as support for the DualSense’s adaptive triggers and haptic feedback, the PS5’s Tempest 3D audio tech and lightning-fast load times. Calling them ‘remasters’ then is perhaps a tiny bit of a stretch, given they’re only a generation old and haven’t had any extra work done to visual assets, effects or gameplay.

For full transparency, there very well could be small updated touches here and there to the game’s visuals outside of resolution and performance that I’m not seeing, but if there are I certainly haven’t been able to pick them out in the many comparison screenshots I’ve taken and PlayStation hasn’t made any claims to the effect. There’s a definite uptick in overall image quality and details that pop in a way they hadn’t before that’s simply a by-product of the increase in fidelity though, especially in close up character scenes. There’s no denying that these games are gorgeous, but again they always were.

That instantly makes this package an awkward proposition. On the one hand, this is a pair of beloved titles in a blockbuster franchise that already looked great and now look and feel better than ever. But by that same token, the scope for improvement is minimal and so minimal improvement has been made, which lessens the appeal considerably unless you’re dying to replay both of these games in a more modern format.

The most obvious reason to replay these titles in their native PS5 outfit is the new selection of visual modes, of which there are three. A Quality mode that keeps to the originals’ 30fps output but bumps them up to a full-fat 4K resolution, a Performance mode that sits below 4K with upscaling in place and a 60fps framerate, and the ‘Performance+’ option at a whopping 120fps in a mere 1080p.

It’s an interesting suite of choices, especially given the Uncharted games’ lean towards a very cinematic presentation and less immediate player control that’s always felt perfectly suited to 30fps. That makes the 4K option surprisingly attractive if you’ve got a nice display, but for my money, the middle-ground performance mode with its upscaled 4K image at 60fps is the sweet spot and will no doubt be the way most people experience these remasters. Naughty Dog’s animation and scene work is arguably second to none in the field so while the bang-average gunplay doesn’t really gain much from the added fluidity it does give everything a nice sense of presence and immediacy without sacrificing too much in image quality.

Less obvious but perhaps more interesting are the additions of support for the unique features of the PS5’s DualSense controller and its Tempest 3D audio tech, both of which are used to mixed results but no doubt add an overall welcome sensory enhancement. Controller feedback is nowhere near as full-on as some other PlayStation first-party titles, which means it doesn’t have much in the way of ‘wow’ factor but is also appreciably inoffensive. Likewise for the 3D audio – it definitely doesn’t feel transformative but when you listen for it there are some excellent touches to discover.

There are moments where all of the Legacy of Thieves Collections’ PS5-exclusive features come together wonderfully though, such as the unforgettable sequence of events in Chapter 11 of A Thief’s End or the train ride in Lost Legacy. With crashes, collapses and carnage going off on all sides at 60 or 120fps, the DualSense’s haptics expressing every bump, scrape and explosion and the 3D audio deftly communicating the direction of it all, it can be an absolutely exhilarating time.

The big question at the end of all this of course is should you spend money on this collection for PS5 if you’ve played both games already? Honestly, probably not. Especially with PlayStation having repackaged the games as a collection only, disallowing a PS5 upgrade from the free PS Plus Collection version of UC4 as well as removing the ability to buy Lost Legacy as a standalone digital title.

Unless you’re a truly die-hard fan desperate to replay them in a slightly nicer format there’s little reason to splash out again. It’ll no doubt be a different story when this same package makes its way to PCs, where it’ll find a genuinely new audience and feel significantly less insidious in its delivery, but console fans needn’t bother. Even trophy hunters excited at the prospect of auto-popping a bunch of fresh ones after doing a save transfer will likely find disappointment in the fact that there’s only one platinum up for grabs. In fact, to nab that you’ve got to complete both games’ lists, which feels unnecessarily mean.

It’s not as though there’s any mistaking this package for anything more than a few extra bells and whistles on a couple of ports, but there’s so much more that could’ve been done to justify PlayStation asking $70–80 for slightly nicer versions of one title that’s free for PS+ subscribers on PS5 and another that was bargain priced before they ceased selling it separately at all.

The Uncharted: Legacy of Thieves Collection is a welcome update to two incredibly important titles in the PlayStation catalogue. Whether or not they’re masterpieces deserving of a double dip is subjective, but there’s no denying that you’re not getting much as a returning player. If you own a PS5 and you’ve somehow not played either game then this is technically the best way to do that right now, though. Plus, PlayStation has made sure it’s just about the only way. 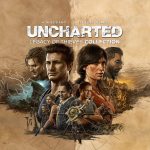 Uncharted: Legacy Of Thieves Collection Review
Overcharted
While it's not overly surprising to see PlayStation migrate two of its biggest last gen titles to the PS5 and slap a new entry fee on the front, it's also not an overly exciting end product. There's merit in playing these beloved and bombastic blockbuster hits in an eye-searing new fidelity but the weight of this package isn't quite worth the gold.
The Good
Impactful resolution and frame rate boosts
DualSense and 3D audio add some welcome extra dimension
Some of the best set piece work in video games
Uncharted: Lost Legacy is still a great time
The Bad
As far as assets and effects go, the visuals are essentially identical
Not enough reason to replay either game if you have before
Both games still suffer from average gunplay and awkward pacing
Only one platinum trophy, and it requires completing both lists
7.5
Good

Uncharted: Legacy Of Thieves Collection Review
Overcharted
While it's not overly surprising to see PlayStation migrate two of its biggest last gen titles to the PS5 and slap a new entry fee on the front, it's also not an overly exciting end product. There's merit in playing these beloved and bombastic blockbuster hits in an eye-searing new fidelity but the weight of this package isn't quite worth the gold.
The Good
Impactful resolution and frame rate boosts
DualSense and 3D audio add some welcome extra dimension
Some of the best set piece work in video games
Uncharted: Lost Legacy is still a great time
The Bad
As far as assets and effects go, the visuals are essentially identical
Not enough reason to replay either game if you have before
Both games still suffer from average gunplay and awkward pacing
Only one platinum trophy, and it requires completing both lists
7.5
Good
In this article:legacy of thieves, naughty dog, PlayStation, PS5, review, Uncharted, Uncharted 4, uncharted lost legacy, uncharted: legacy of thieves collection