If you are feeling cold and alone after Endgame, Ultimate Alliance 3's fun gameplay and huge roster of playable characters might be just what you need to warm up once more

Gamma radiated rage monsters, thunder deities with magic hammers and gloves that can destroy the universe – these are all things that we have grown accustom to over the past ten years with the Marvel Cinematic Universe (MCU). From humble beginnings with Iron Man in 2008, to the recent Avengers Endgame, superheroes have been massively popularised in mainstream culture. But a full two years before Tony Stark smashed onto the big screen, my friend and I were pulling all-nighters blasting through action game Ultimate Alliance on the Wii. Now, thirteen years later with a sequel in between, Ultimate Alliance 3: The Black Order has surfaced to tempt me into forgoing sleep once more. The MCU’s influence might get a tad heavy-handed when it comes to the story, but with heaps of playable characters, enjoyable gameplay and a flexible team system, the scales more than balance out.

Ahh, there are some familiar faces

The game opens with the ever popular band of misfits, The Guardians of the Galaxy. Each character is introduced as they quip back and forth amongst each other while cruising through space. The voice cast for these characters is noticeably brilliant from the offset, each of them very close to their MCU counterparts but with slight, unique inflections. Their character designs are equally as wonderful. Starlord and Rocket look like they have stepped straight out of Infinity War, whereas Drax and Gamora are far more comic book inspired.

The gang make their way to a hidden Kree (blue aliens for the uninitiated) ship at the behest of alarms and alerts. Once they arrive on the ship, a light tutorial introduces you to the game’s mechanics. Being a dungeon-crawler there is of course the classic—this button to move, this button to attack yada yada yada, as well as an introduction to changing between characters with a quick press of the d-pad. This allows you to swap between four different play-styles on the fly, keeping combat interesting.

Speaking of combat, it is responsive and full of flashy special moves that expend points from an energy bar that gradually regenerates over time. These special moves can be combined to maximise their effects. For instance Drax can create a small tornado that draws enemies in, while Starlord throws a number of grenades into the vortex to cause some big damage. Some solid team work on display for sure. By default, every bit of damage dealt (whether to you or by you) is indicated by numbers above the corresponding character. This can really clutter the screen in bigger fights but can luckily be turned off or even turned down to only show indicators that relate to the player character. I know some people like to see all of the info on display, so that is down to personal preference and it is nice to have the option available both ways.

What a beautiful night to fight ninjas on a rooftop

The early stages of the game ease you into combat and are fairly easy, but the difficulty rises steadily, with dodging and blocking becoming necessary later on down the track. Each character moves and attacks in a manner faithful to their varied personalities; Gamora strikes with graceful ferocity, Groot swings out with lumbering vines and best of all, Starlord busts out dance moves with each shot from his dual pistols. It is a small detail, but a welcome one that adds some extra charm.

Once the game has stepped you through the basics, you come across the one leading the Kree, Gamora’s adopted sister Nebula. As is in the comic/movies, they don’t exactly see eye to eye and this encounter leads to the first boss fight. Nebula has a huge pool of health and can stun and push you back with her attacks, meaning some amount of finesse is required to best her. It is here where the posture bar is introduced. If you do enough damage to a larger or more powerful foe, they are temporarily stunned and unable to attack. While in this weakened state your attacks cause more damage, giving you an opportunity to hack away a serious chunk of health. Another meter on the screen fills as you inflict damage and, once full, allows you to do a super move. Each character has their own meter and can combine their super move with others to really mess up the bad guy’s day. Nebula’s boss fight is a fairly straight forward bash and smash, but boss encounters later in the game are often multi-staged, dynamic fights that mix up the gameplay well and are more often than not very well balanced and challenging.

Plenty of goons and another boss fight later, the major plot of the game is unveiled in a cutscene. The big bad is unveiled to be, drum roll please…Thanos and his disciples, the titular Black Order. Your mission is to track down and secure the Infinity Stones before Proxima Midnight and the Black Order collect them for their master. Is this sounding at all familiar to you? It definitely should, because the whole crux of the story is a slightly altered retelling of the MCU to date. I know that the films are massively popular and cashing in on said popularity is by far the safest bet, but I was hoping that the narrative might show some originality. Don’t get me wrong, the writing is fantastic and dialogue between characters is well acted, but it all feels a little too familiar, especially this soon after Endgame.

Boom, right in the kisser

During the game’s campaign you progressively unlock 36 unique heroes (and antiheroes) to join the fight. Each character is introduced organically throughout the story and usually requires a certain challenge to unlock. You are free to mix and match characters in a party of four, with bonuses being applied if your team’s abilities match or if they are canonically linked. As an example, if your party consisted of Ironman, Thor, Captain America and The Hulk, you would receive stat bonuses for using Original Avengers, but you could also mix things up by putting together Venom, Luke Cage, Drax and Captain Marvel for a boost in strength as all members are considered to be heavy hitters. There are a huge amount of combinations to try out and plenty of stat bonus criteria as well, so it never feels like you are being punished for using your favourite characters.

Each individual character has their own levelling system that unlocks new abilities and attacks as they grow stronger, rewarding you if you stick with a particular hero. You do also find XP cubes scattered throughout levels that can be used to boost character levels, so if you want to try out a new hero you can raise them to an appropriate level. I love that experimentation is encouraged. I found myself swapping out teammates left and right as more and more were unlocked and if I didn’t take a liking to the new addition I could simply swap back to an old faithful at the next checkpoint.

In the pursuit of the Infinity Stones you are taken to a bevy of different iconic locations from the Marvel universe, each with its own corresponding enemies and bosses. From fighting robots at Avengers Tower to battling ninjas at Kingpin’s Shadowtower, I never felt as though I was at a location long enough for it to become stale. The varied locales and ever changing enemy types kept me interested and entertained for the duration of the campaign. I will say though, the occasional puzzles that are thrown in to certain levels are far too easy and pointless. Move a coloured block to the matching colour platform—make your way through a tiny and not at all difficult maze while fighting— none of them felt interesting and were more distracting than engaging. Plus it hurt me a little on the inside to hear the apparently intellectual Spiderman exclaim how stumped he was by a puzzle that a kindergarten class could overcome. C’mon Spidey you’re better than that.

From Iron Fist to The Wasp, you will be absolutely spoiled for choice

Being that there are four heroes to a party, it makes sense that Ultimate Alliance 3 can be played in its entirety as a co-op experience. You are able to play online, locally with multiple consoles or together on a single Switch. Playing with a friend or two is great fun as long as you can all agree which heroes to choose of course. Co-op is drop-in drop-out, making it simple and easy to smash out a level or two with a mate before going back to playing on your own. While kicking arse with friends is awesome, playing on one system has a drawback in the form of the camera. While playing single-player or with multiple consoles, the camera is completely in your control, however while playing couch co-op, the camera simply tries its best to accommodate everyone’s actions, often leading to awkward angles or straight up clipping into the environment. Though it is manageable, it isn’t the best way to play.

With a pretty sizeable roster to unlock and a whole bunch of dastardly villains to punch, the main story is fun, challenging and entertaining, but is there enough content to keep you coming back after you beat the main story? Yes and no, it really depends on your preference. Throughout the main campaign you come across rifts, not dissimilar to the Nephalem Rifts in Diablo III. These rifts are separate challenges that up the difficulty and add stipulations and restrictions. Some require you to defeat X number of enemies in a certain time limit, others pit you against a previously defeated boss with their damage output turned up to eleven. If beaten, these grant you unlocks such as character skins and XP. They are a welcome inclusion, but even with the rifts I can’t guarantee I will be coming back to UA3 now that I have completed the near 14-hour campaign. There will be paid story DLC releasing later this year, but as a standalone game there isn’t a huge amount of replayability outside of testing out all of the characters in the rifts. 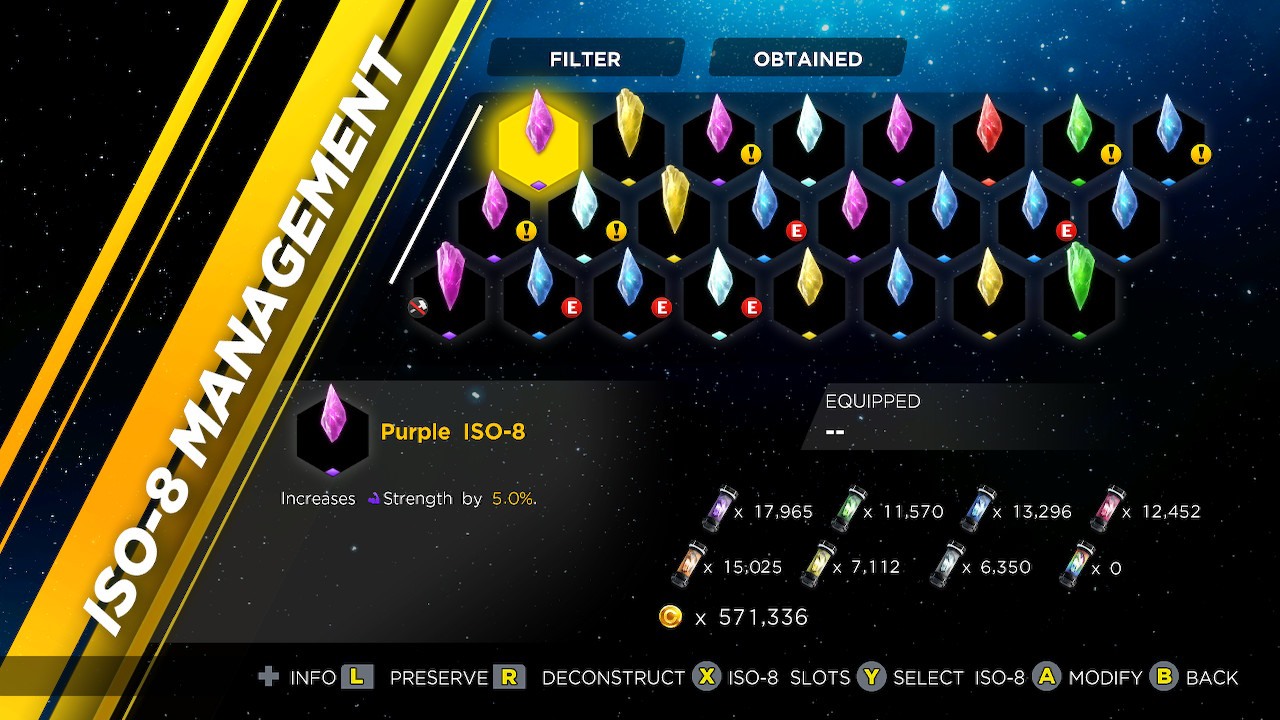 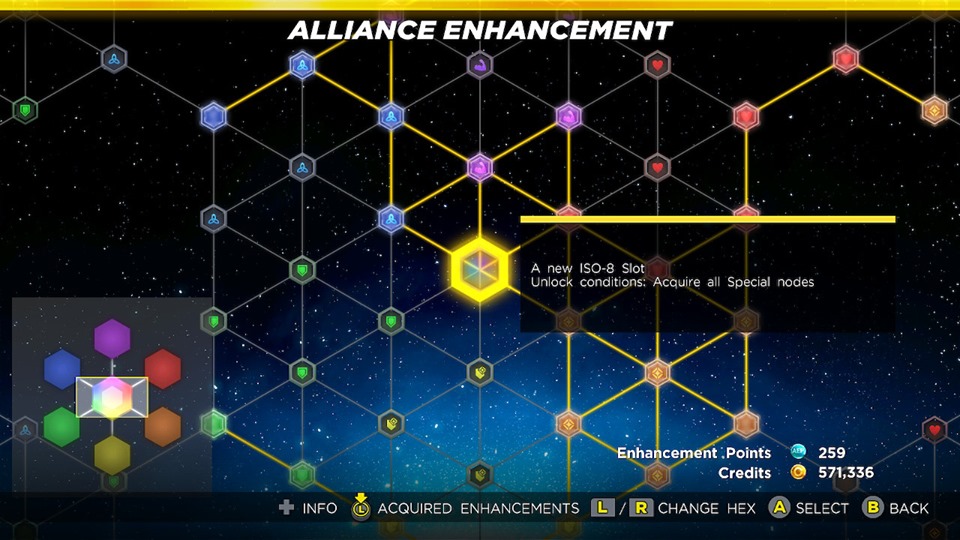 With a skill tree as well as buffs in the form of collectible Iso-8 crystals, there are plenty of options to enhance your team as a whole

I really do wish that the story didn’t lean so heavily on the MCU as I feel like an opportunity was sorely missed to take a road less traveled, but in the grand scheme of things it didn’t distract from the fun I had a great deal of. Even putting the nostalgia I have for this series aside, I had a fantastic time playing Ultimate Alliance 3. The characters all look and sound Marvel-lous (as if I wasn’t going to pluck that low hanging fruit), the combat is simple to understand and engaging and the sheer amount of playable heroes satiated my nerdy desires thoroughly. Playing alone or with mates, UA3 is a good time to be had.

Adam Ryan
Adam's undying love for all things PlayStation can only be rivalled by his obsession with vacuuming. Whether it's a Dyson or a DualShock in hand you can guarantee he has a passion for it. PSN: TheVacuumVandal