The original Pokémon Mystery Dungeon games (Red Rescue Team and Blue Rescue Team) have a special place on my heart. Blue Rescue Team was gifted to me while I was moving away from the suburb that I had grown up in and into an entirely different area – it was tough saying goodbye to practically all of my friends. I was always expecting to enjoy it because I adore Pokémon but what I wasn’t expecting was how much I would enjoy it. Blue Rescue Team is one of my favourite Pokémon games around and the remake in the form of Pokémon Mystery Dungeon Rescue Team DX is exactly what I wanted for the Switch. While it does make a few mistakes, it is still an excellent recreation of the 2005 mystery dungeon game and it gives me hope for potential future entries into the series on the Switch. 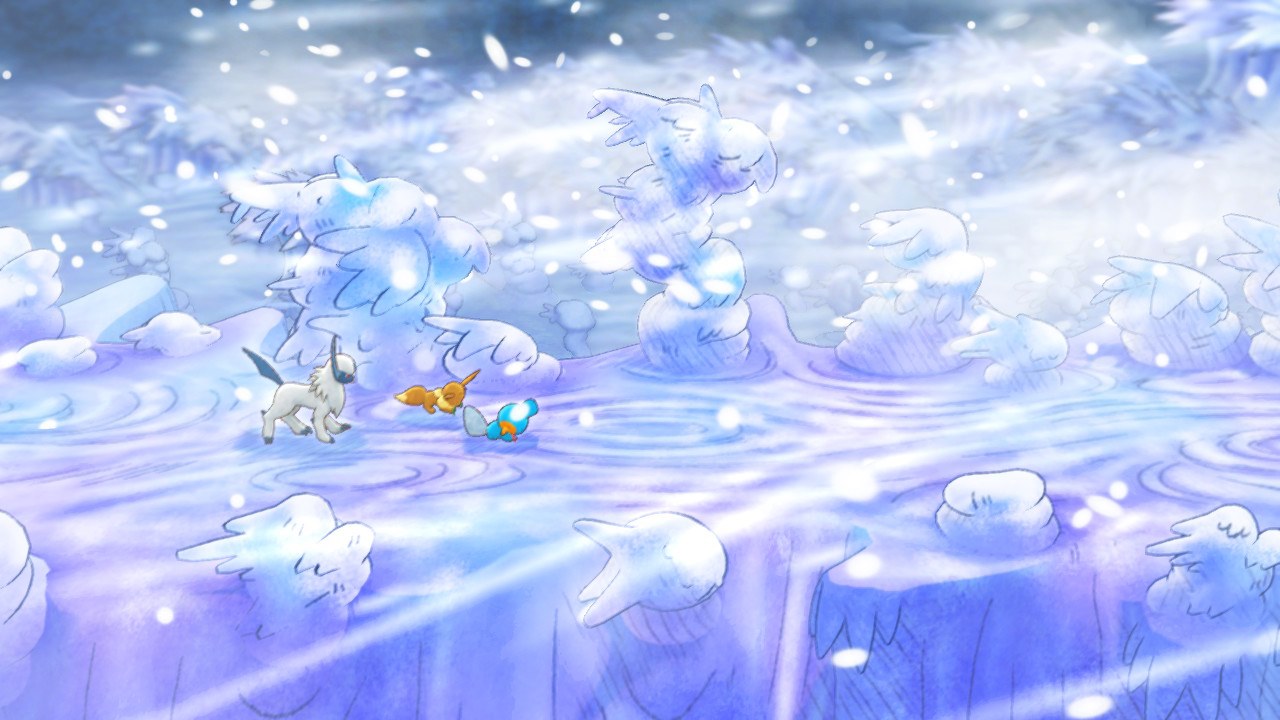 Pokémon Mystery Dungeon Rescue Team DX takes place in a world mainly consisting of only Pokémon (the dream). Humans do exist but you don’t see them and they are only spoken of in myths and tales (once again, the dream). You play as a human who has been transformed into a Pokémon with your memory being wiped. All you know is your name and that you were once a human. You have to piece everything else together, including why you turned into a Pokémon in the first place. You immediately befriend a Pokémon when you wake up and you set out on your journey. You very quickly learn that natural disasters are plaguing the world and it has made life anything but easy for the Pokémon trying to live peacefully. You and your new-found friend decide to form a rescue team whose purpose is to help those affected by these natural disasters, and it quickly becomes apparent that something has gone awry in the world. Pokémon Mystery Dungeon’s story is a nicely paced mix of a character drama filled with tender moments and world connection amongst the calamitous natural disasters. The story isn’t truly exceptional, but it serves its world incredibly well and is told quite nicely.

Throughout the story of Pokémon Mystery Dungeon, you’ll find yourself traversing a number of environments that have all been affected by the natural disasters. Frigid climates are warming up and their snow is melting, and bushfires are raging through dense woodlands (that one hit a little close to home in light of recent events). In a way, you could view the events of Pokémon Mystery Dungeon as an allegory, with the subtext being a commentary on the effects that climate change can have on the environment and the people and things living in it. It’s a message that was sort of easy to overlook back in 2005 when I was much younger but much easier to see and understand as I’ve matured (or at least pretended to) in this day and age.

The gameplay for Pokémon Mystery Dungeon is very much a matter of less is more. Fans of the traditional Pokémon experience might find themselves completely out of their depth at a first glance but that feeling quite quickly wears off. The design is fairly intuitive and easy to understand but players that are more experienced with Pokémon’s general ruleset won’t take long to capitalise on the game’s systems. The core principles of the series are still in there, with the various types still coming into play, but now the moves have various ranges so spacing is something that you’ll have to account for. One change that players of the original game will notice is that there’s an ability to use just a basic attack and not one of your given Pokémon’s moves. It pays to remember that the AI can also take advantage of this– something which I learned when I got destroyed by a beefed-up Wobbufet of all things. 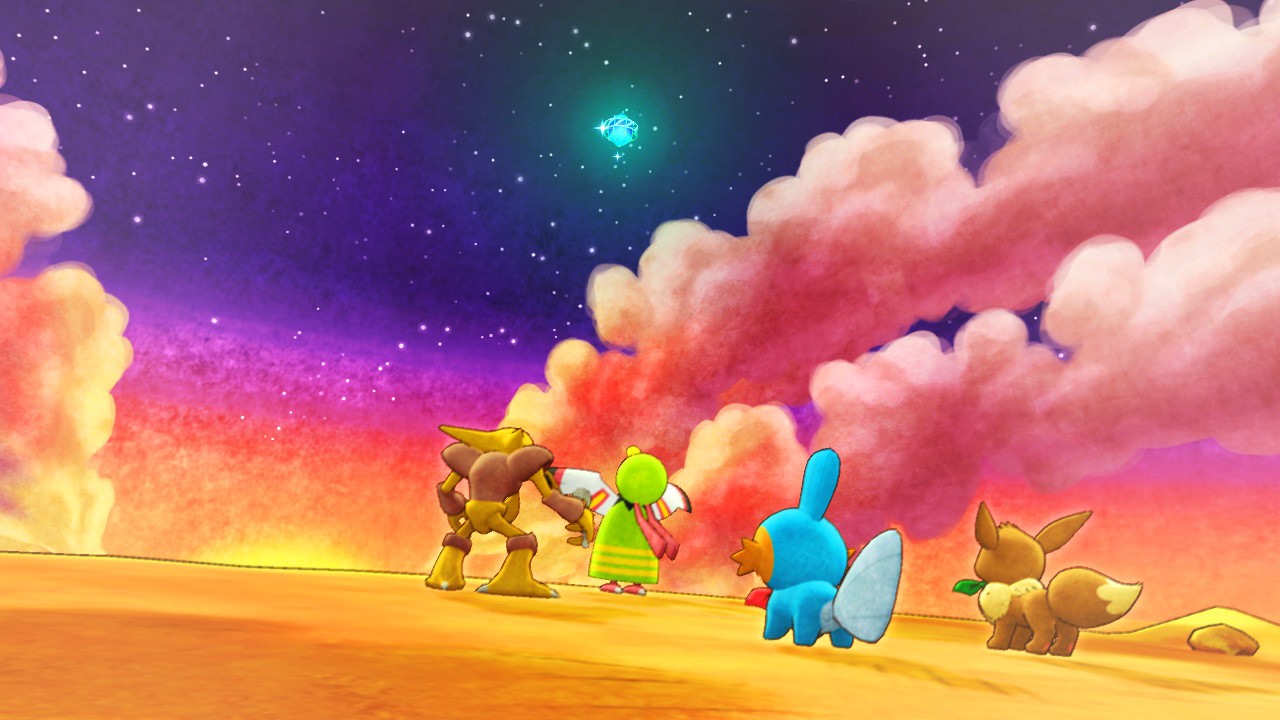 Pokémon Mystery Dungeon Blue Rescue Team was made during the interim between the third-gen and fourth-gen of Pokémon and the series has seen a vast amount of changes and additions since then. Pokémon whose evolutionary lines were extended in the later generations, like Dusclops and Electabuzz with Dusknoir and Electivire have had their newer evolved forms added into the game and the evolution mechanic has been slightly changed. Rather than requiring specific evolution stones or items, requirements outside of levelling have been shifted to a standardised evolution crystal and the required amount varies depending on the stage of the evolution. This update of the Pokémon roster also includes baby forms, so Pokémon like Budew and Bonsly are present as well. The last update that has been brought into this remake is Mega Evolutions. Through use of consuming an Empowering Seed (or if an enemy Pokémon takes out one of your Pokémon), Pokémon who have a Mega Evolution can temporarily reach that powerful state. The Primal variant of Groudon and Kyogre are included in this Mega Evolution inclusion and they bring up an issue I had with the combat later in the game.

While I’m happy to heap praise on the game, the game is definitely far from perfect. One of my biggest gripes is something that really comes to light within one of the mission types. There are four varieties of missions that you can play to increase your rescue team’s rank – delivery, rescue, item collection and escort. Escort missions are easily one of the most challenging mission variants around, especially in endgame areas, as they require you to escort a (generally) weak Pokémon to the designated target within a dungeon. Mission difficulty rankings go as low as F and higher than S and the higher difficulty escort missions expose a glaring flaw with team formations. When you traverse through the various dungeons within Pokémon Mystery Dungeon your team will more or less fall into a standard formation. For most scenarios, this is perfectly fine as your team should be built well enough where any Pokémon within your team should be able to handle themselves. The problem arises when you have a Pokémon to escort as the AI brilliantly decides to lump this Pokémon at the very back, one of the most vulnerable areas for a fragile Pokémon to be. Being able to change the formation of your team so the Pokémon being escorted isn’t always exposed would make these missions much more enjoyable and less expensive on the reviver seeds. The game is also guilty of strangely brutal game balance that is very clearly shifted towards the AI when it comes to the bosses. I understand it can be hard to have a fair playing field for the bosses when you can potentially have up to eight Pokémon fighting them at once but adding a stage where they receive almost half as much damage while dealing considerably more while also having moves that can cover a large portion of the boss area is a level of poor design that a lot of JRPGs are guilty of and it was annoying to see it here. Is it impossible? No, not by any means, but Pokémon has never been about throwing unfair game design your way. I’m all for Pokémon games being more challenging but there has to be a better way to go about it.

Music is perhaps one of the strongest points of Pokémon Mystery Dungeon. The original game from 2005 always had a very strong and memorable soundtrack to accompany its charming and inviting world. This remake quite subtly revitalises the music with some new instrumentalisation but it does it in a way that stays incredibly faithful to the original and still captures that charm of late-GBA/early-DS era music. I still found myself completely entranced by the sheer variety in tone and atmosphere that the soundtrack provides. Early, more inviting areas have a charming atmosphere accompanied by tonally bright music and later area have an air of intrigue, something which really comes across with the playfully dissonant music. Outside of the second-generation’s music (Gold/Silver/Crystal), Pokémon Mystery Dungeon Rescue Team DX’s soundtrack is by far one of my favourites in all of the Pokémon games released.

Art is also one the strongest points of Pokémon Mystery Dungeon Rescue Team DX. It was always going to be a bit tough to appropriate the GBA/DS art style to the 3D space considering the limitations the artist had to work with back in 2005, but the artists at Spike Chunsoft knocked it out of the park with what might be one of my favourite art styles in a long time. The easiest way to describe it is a hand-drawn, Winnie the Pooh-esque art style, with the charm of the world being enhanced by the love and care put into the art. It’s also a clever use of technical artistry as the style masks the game’s less-than-stellar anti-aliasing. The game still looks quite sharp and still quite stunning on the big screen (something which could not be said of Sword and Shield), and the colouring style on the actual models of the Pokémon adds subtle texture to the monsters. Even the shadows cast by the various Pokémon has been drawn to perfectly fit each model. These artists have poured a lot of love into this game and it shows. 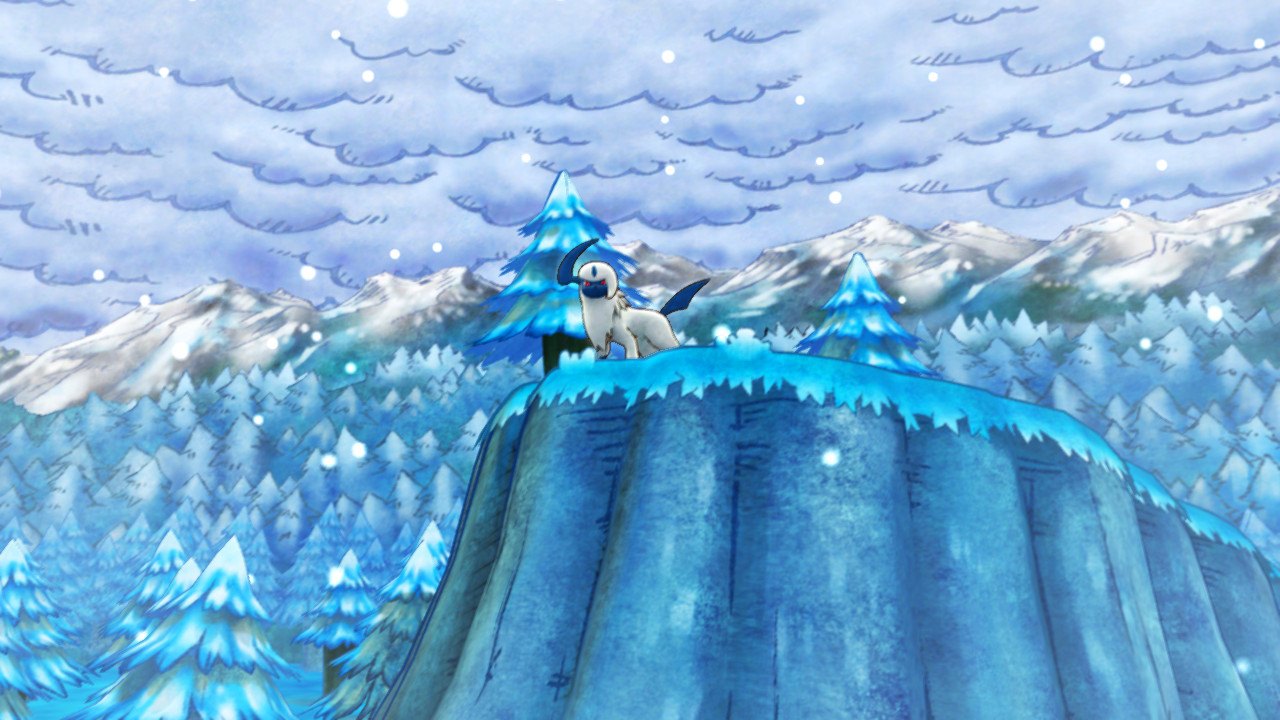 In terms of performance, the game runs at 30 frames per second in handheld and docked mode, with very little hiccups during the handheld mode. In the docked mode, however, is where some minor issues arose. The game had this very weird hitch that would constantly occur every few seconds or so and it was only really noticeable when I was going through the dungeons as there is quite a lot of movement there. Outside of this, I’ve had no issues with the game on the technical side. No crashes, no freezing – it’s actually been a very pleasant experience.

Pokémon Mystery Dungeon Rescue Team DX feels like Spike Chunsoft’s love letter to fans of the mystery dungeon formula and Pokémon fans alike. The team has put an admirable amount of effort into recreating the 2005 GBA/DS game and even went as far as updating the Pokémon roster to include updates to baby forms and evolutionary lines made since the original game’s release. Sure, there are a few mistakes like lacking the ability to customise the formation of your team or some boss mechanics that are heavily skewed in favour of the AI, but they aren’t great enough to truly diminish the love and care that has gone into this remake. Hopefully, this means good things about the future of Pokémon Mystery Dungeon games on the Switch.