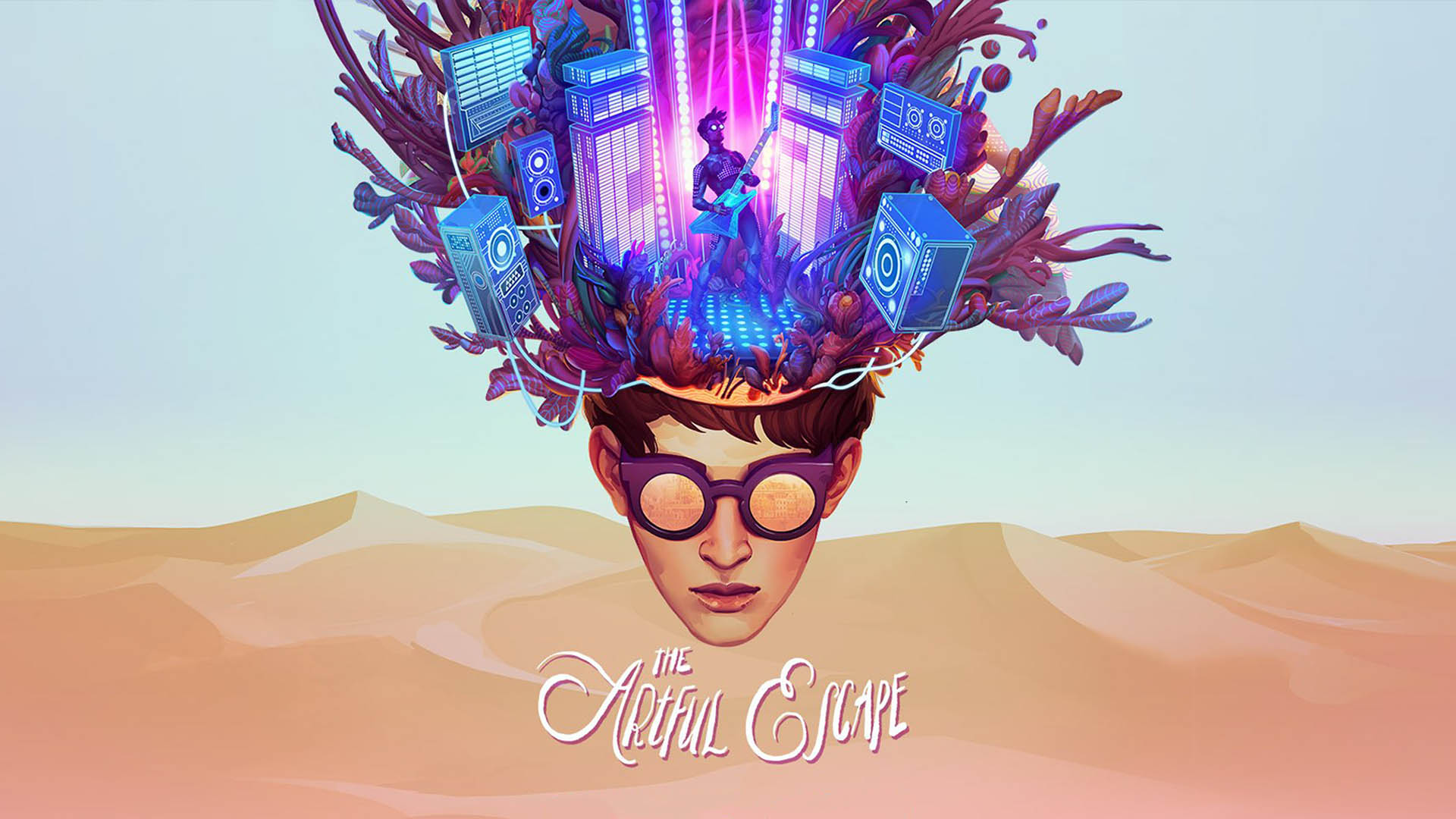 Musical video games are sadly few and far between. Not music games in the literal sense but games of varying genres that are intrinsically tied to music in themes and gameplay. The indie space does it well, with Sayonara Wild Hearts easily being one of my favourite examples of a musical game. I reckon that game’s publisher, Annapurna Interactive, has my tastes pegged pretty well because they’ve backed yet another fantastic, creative and wholly unique musical experience with Beethoven & Dinosaur’s The Artful Escape.

Francis Vendetti has a famous uncle. Not the playground-typical “My uncle works at Nintendo” kind of famous, but the kind where his entire home town is so enamoured with its folk music prodigy that Francis’ entire existence is in the shadow of the late, great Johnson Vendetti. The Artful Escape opens with Francis gearing up to headline the Calypso community’s three-day Johnson Vendetti Festival musical performance, and doing his very best to ignore the fact that his dead uncle’s billing on the posters is exponentially larger than his own.

Everything changes though when Francis is visited by a mysterious, otherworldly being and brought aboard The Cosmic Lung – a ship that travels a place between space and time called the Cosmic Extraordinary. Lightman’s planning a galaxy-spanning tour and needs a support act as his current one has pulled out at the last minute, and his intelligence gathering has led him to Francis Vendetti of all people.

This sets off Francis’ trip through the Cosmic Extraordinary, a ride across the “dilated pupils of the universe” that sees him travel to incredible places and meet incredible beings while on his way to the most important gig of his life. It’s a journey that sees Francis find himself, and not just in his pre-determined story but through a healthy amount of player choice – you’ll get to pick out and customise both a sweet rockstar moniker and an entire outfit by around the halfway point.

Writing and dialogue are generally great, and the delivery from a surprisingly star-studded cast that includes the likes of Lena Headey and Carl Weathers is a delight. There’s a sense that the script was believed to be much more poignant than it actually is – bordering on self-congratulatory at times – but the intended lessons and themes are communicated well.

Gameplay in The Artful Escape broadly covers three categories – chatting to Lightman, Violetta and the other crew and passengers aboard the Cosmic Lung, trekking across new worlds in light platforming sections and playing face-melting guitar sequences alongside cosmic creatures that would even Lovecraft would think are a bit much. As a narrative experience it’s pretty familiar territory, but the way that each new story beat gently builds to a crescendo means that it strikes a great rhythm – even if said rhythm becomes predictable over time.

The Cosmic Extraordinary isn’t just a liminal space between Francis’ ego and id, it’s a superliminal superhighway made of stars and thrift store pastiches of Victor Moscoso

Platforming is probably the game’s weakest area, not that it’s not competent, but it never strays from ’run to the right and occasionally jump’. Thankfully it’s not important, the less attention needed on Francis the better as what’s going on around him is usually another ridiculous visual and aural delight with environments and creatures lighting up and reacting whenever the almighty Shred button is held down (yeah, that’s a thing).

The jam sessions with the cosmos’ most illustrious beings are where it’s truly at, with The Artful Escape employing a clever five-button musical key that serves Francis’ interactions throughout the game. Playing along with awe-inspiring astral anomalies sees the player match sequences of the five buttons either alongside the creatures or directly after them, depending on whether you trust more in your reflexes or your memory. Like the platforming there’s eventually a sense that these things go mostly the same way every time, and certainly by the final ‘boss’ encounter I knew exactly what to expect, but it’s still a fun cacophony of light and sound every time.

Talking about gameplay doesn’t really capture the joy of The Artful Escape though, and neither does talking about that joy. It’s a game that has to be experienced to be appreciated, pulling players on a psychedelic rock journey at a breakneck pace with such an abundance of new and unbelievable sights and sounds that it feels impossible. The Cosmic Extraordinary isn’t just a liminal space between Francis’ ego and id, it’s a superliminal superhighway made of stars and thrift store pastiches of Victor Moscoso. It’s fucking awesome. To sit and muse on what unimaginable beings from another dimension would look like should be an exercise in futility – they’re unimaginable, after all – but somehow the team at Beethoven & Dinosaur has gone and bloody done it.

To the nitty-gritty though; the Unreal Engine-powered art on show here, mixing up 2D elements in a 3D space with all of the modern trimmings is a triumph for the most part. I found myself completely gobsmacked throughout the brisk, roughly five hour runtime at just how dense and detailed everything is and how much new art is constantly introduced. It’s a mammoth effort from a small studio and it pays off hugely. It does have a tendency to stutter or lose its step some of the time, but it’s so wildly extravagant and awe-inspiring that I didn’t once mind. Once you’re powersliding through alien forests, holding the Shred button and watching mushroom-jellyfish creatures light up in a sea of colours you quickly forget any missteps.

It should go without saying, but the soundtrack in The Artful Escape is bloody good. Not least because you’re often in control of the core of it, and because the game excels at making it feel like you’re in control while still directing things just enough that you can’t sound terrible. The odd couple of moments where the game lets you cut loose with the entire musical key of your own accord are *chef’s kiss*. I still go back and replay those bits after the fact.

On the surface, The Artful Escape is a simple narrative adventure, but it’s so much more in practice. It’s a musical journey, a dazzling light show, an LSD trip disguised as a pop-up book, a music video written by Kafka, a digital Simon Says and the rock opera adaptation of a B-grade cosmic horror film. Its underlying themes can feel a little one-note, and its core gameplay loop of running to the right of the screen certainly isn’t a challenge for the mind or hands, but it’s most definitely a psychedelic trip worth taking. 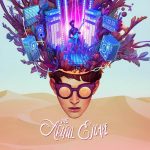 The Artful Escape Review
V for Vendetti
The Artful Escape is a brash, bold and beautiful musical journey with a simplistic gameplay hook and all the interdimensional jellyfish deities you can shake a quantum-powered space guitar at. It's the next-best way to spend an afternoon indoors to dropping acid.
The Good
Artful is an understatement – looks phenomenal
Shredding along to a wicked soundtrack is tons of fun
Well-written and superbly acted dialogue
Full of wonderful surprises
The perfect length (lucky for some)
The Bad
Platforming sections boil down to ‘run to the right’
Occasionally comes off as a little self-congratulatory
9
Bloody Ripper

The Artful Escape Review
V for Vendetti
The Artful Escape is a brash, bold and beautiful musical journey with a simplistic gameplay hook and all the interdimensional jellyfish deities you can shake a quantum-powered space guitar at. It's the next-best way to spend an afternoon indoors to dropping acid.
The Good
Artful is an understatement – looks phenomenal
Shredding along to a wicked soundtrack is tons of fun
Well-written and superbly acted dialogue
Full of wonderful surprises
The perfect length (lucky for some)
The Bad
Platforming sections boil down to ‘run to the right’
Occasionally comes off as a little self-congratulatory
9
Bloody Ripper
In this article:annapurna interactive, Beethoven & dinosaur, francis vendetti, game pass, indie, johnny galvatron, kieron verbrugge, Microsoft, music, platformer, review, rock, the artful escape, wellplayed, xbox