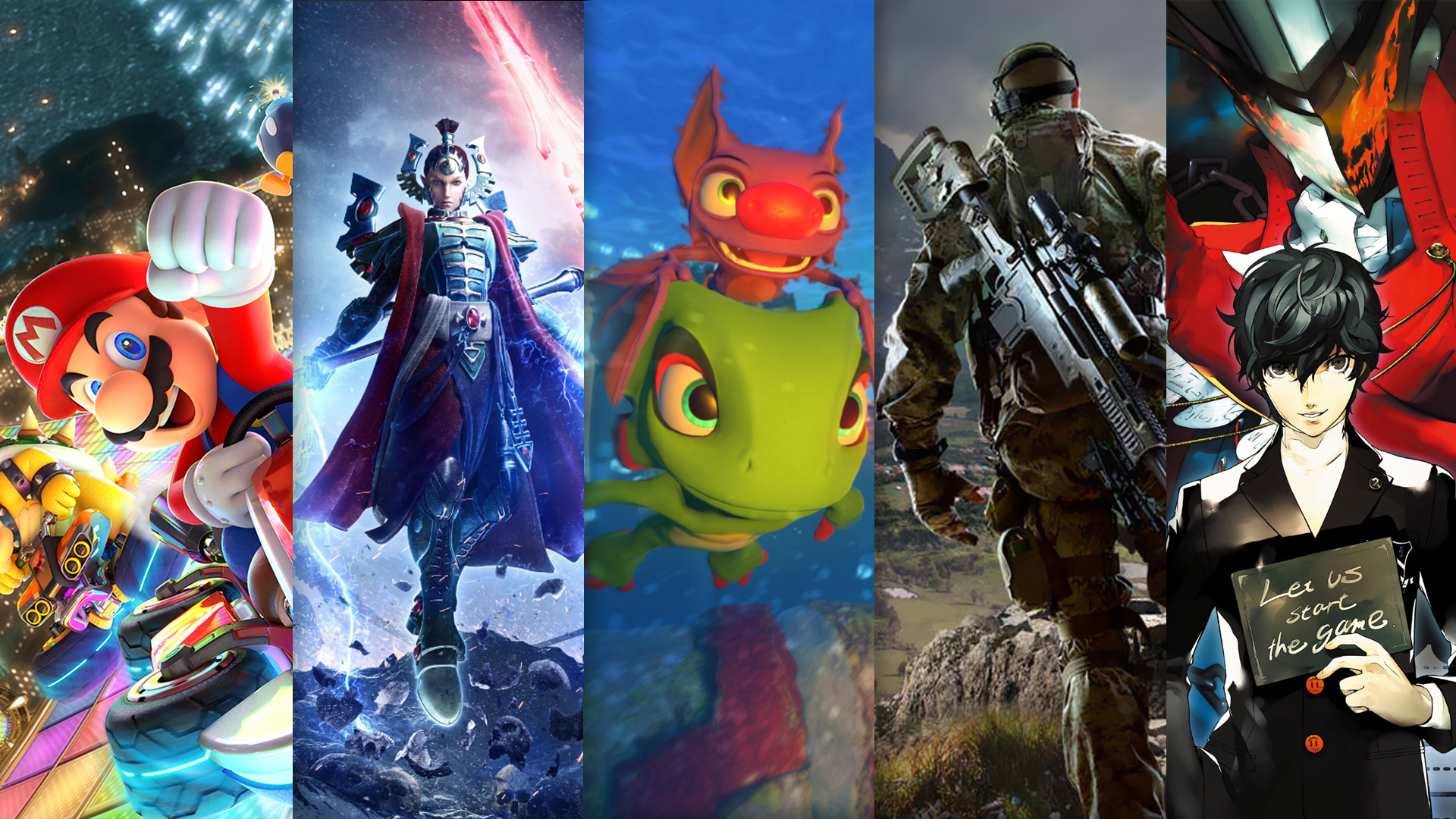 2017 has been relentless with its stream of top-quality AAA titles battering us into submission and then asking us if we want more. April may be cooling its jets a bit, but if you’re a fan of remasters or niche titles then April’s got you covered. The Switch also spreads its wings with a couple of new titles; will it soar like an eagle with modest battery life or flap its detachable Joycon wings helplessly as it plummets to the ground?

April is an absolute bangin’ and Brobdingnagian month as it is jam-packed with games that are giving me a severe case of jortal tightness. However, instead of testing the integrity of my jorts throughout April, they’ll be feeling the full weight of the tightness on one singular day – April 26. Sniper Ghost Warrior 3 (my second-most anticipated title of 2017 next to RE7… which I am yet to play ¯\_(ツ)_/¯), Outlast 2, What Remains of Edith Finch and Syberia 3 (it’s been 13 years since number 2 was released!) are all dropping then. We may get Syberia 3 a little earlier (April 21st if rumours are to be believed), but it’s still a momentous day. Basically what I’m saying is that my backlog is about to get a shit load bigger, and I’ll need a new shelf to display all the dusty games that I don’t play.

I am fairly sure at least 30% of the reason I bought a Nintendo Switch was to get my hella Mario Kart 8 swerve on. I salivate thinking about it – just imagining a Mario Kart game with the online problems from the Wii U version all taken care of has me wistfully staring into the distance dreaming of a better tomorrow. I also expect to enjoy an online infrastructure that is not designed around 14-year old boys explaining all the salacious acts they have performed on my mother. Beyond that, I might be one of the few involved Warhammer fans that isn’t grossly mad about how Dawn of War III depicts their plastic army men. You’re mad that dudes in big hulking armour are doing flips and shit? Mate, you need to embrace the sheer stupidity of it all and run with it. The game looks like something a 12-year old drew on their pencil case when thinking about Warhammer, and I am all about that. Finally, Bulletstorm: Full Clip Edition might not be the hero we want OR deserve, but I liked that game damn it, and I will play it again as Duke Nukem for the greater good. Hail to the king, baby.

One could argue that March provided the main GOTY contenders for 2017. PS4 had Horizon Zero Dawn, Nintendo had The Legend of Zelda: Breath of the Wild and Xbox had… umm… So of course March was always going to be a difficult month to follow up on, but April does have some cool titles. First game I have is Yooka-Laylee. I wasn’t a huge fan of Rare or their Banjo-Kazooie games but I did enjoy them for what they were. Quite a few members from Rare that worked on the series have taken on this new project at Playtonic Games and I’m interested to see what they do with it. Second is one that I wasn’t expecting – Voodoo Vince Remastered. I’m not particularly a big advocate of remasters, especially when for a game that is 5-minutes old (a current trend it would seem), but Voodoo Vince released 14 years ago and is one of my favourite games that I played on the original Xbox. Having the chance to play it again would be awesome and I don’t know how this opportunity has eluded me until now. Lastly I have Dragon Quest Heroes 2. Admittedly, I have never played a DQ game outside of DQ Builders, but a good friend of mine raves about how good the games are, so I figure why not give it a go? Bring on April!!

Most of my April will be catching up to one of the greatest months in my history as a gamer. Horizon Zero Dawn is one of my new favourite franchises, Zelda is one of the best games I’ve ever played and I still have to get around to Mass Effect and Nier at some point. Having said that, there are a couple of smaller games and one big release I am really excited about. As an old school Nintendo fan, Yooka-Laylee is going to be a blast from the past for me and a more polished one too. Playing Rare Replay on Xbox One just didn’t do it for me, because the game design has aged that much; playing a Banjo-Kazooie in 2017 sounds much more attractive to me. Another smaller game is Drawn to Death by David Jaffe, the creator of God of War and Twisted Metal. I am glad the game isn’t going for the F2P model anymore as I felt it would be a disservice to its really cool style. While not a huge lover of PVP games, the game design, mechanics and art style instantly stand out as something unique and I am keen to give it ago when it becomes the free game on PS Plus next month.

Another game I’m excited for is Mario Kart 8 Deluxe because Mario Kart just owns. I will gladly pay twice for Mario Kart 8, especially if I can take it on the go. The elephant in the room is obviously Persona 5. I was a late bloomer to the series, but Persona 4 Golden on Vita blew me away. I just feel compared to every other JRPG that is set in a medieval world with dragons and magic, the Persona series really carved a whole new lane for itself where it sets the game in such a radically different school environment, creating some strange and very diverse scenarios. Everything about Persona, from the characters to the writing to the story to the setting to the menus to the combat, it’s all done with such a level of confidence and oozes with personality. Needless to say, Persona 5 is going to be a juggernaut.

Persona 4 is one of my favourite RPGs ever made. Persona 4 Golden (which was essentially a souped-up version with new characters) is also one of the greatest games I have played in recent memory. I think I sunk in a good 150 hours which by my standards playing single player games is a hell of a feat!  It would be a good assumption that my jorts are at breaking point for the return of Persona to the West. The game already has rave reviews in Japan. The cool devs at Atlus do not fuck around when it comes to the Persona series. This one’s guaranteed to be good.

After outrage at the refused classification of Outlast 2 I thought April was destined to suck, but thankfully it’s been classified by our tight-arse Classification Board so it’s all aboard the horror-themed hype train. I have a love and hate relationship with horror games, mostly stemming from the challenge to remain manly while screaming like a 13-year old girl at a Justin Bieber concert. The first game had me waking up the neighbours with screams and actually breaking some furniture with jump scares and I can’t wait to see what they have planned for this one.

I am still wading knee-deep in side quests throughout the Andromeda galaxy (expect my Mass Effect review some time in 2018), and I’m kind of glad April isn’t filled to the brim with titles I won’t be able to find the time to play. There is however the small case of Persona 5, which will shamefully be my first entry in the now legendary series. I have heard nothing but good things about the series in general, and I’ve always loved the effortless Atlus style. I’ll also be donning my casual detective jorts for Giant Sparrow’s walking simulator What Remains of Edith Finch. I’m hoping it’s more The Vanishing of Ethan Carter and less Everybody’s Gone to the Raptors, but we’ll just have to wait and see. Still pretty miffed there were no raptors in that game…

What games are you looking forward to this April? Did we miss anything important coming out this month? Let us know in the comments below.