I have fond memories of Street Fighter II as a child. My local pizza takeaway shop had an arcade cabinet of the game, and I distinctly remember being so terrible at it that the owners of the shop actually put the machine in ‘Free Mode’ so I could have unlimited attempts at beating Arcade Mode. Basically, M.Bison is an asshole.

This meant that I had a bone to pick with Ultra Street Fighter II: The Final Challengers, a score to settle over 20 years later. So I tightened my red judo headband and gave it a go.

Welcome back to the stage of history

Sure enough, 36 minutes later I finally managed to beat M. Bison. My girl Cammy had carried me to victory, and I could drink in that victory screen while reclining in my gaming chair. My honor was restored. With this singular goal achieved, I could now review the title properly at my leisure and truly appreciate what has been done to make Ultra Street Fighter II: The Final Challengers new and exciting in the year of our lord 2017.

Screenshots do this game a great service

The truth is, in 2017 we have weathered the initial teething problems of games being remastered, and consumers now have set expectations of what they want and what they believe is a fair and reasonable price. Ultra Street Fighter II: The Final Challengers comes in at a costly sum of $59.95AUD, which is is a hard pill to swallow considering the spread that is on offer. Sure the game has been graphically improved, with the talents of Udon Entertainment (of the Street Fighter graphic novels fame) redrawing each art asset in the game into a more pleasing HD effort as part of the original HD Remix release of the Street Fighter II game. This covers the fighters themselves, background assets, projectiles – everything has been picked out and souped-up to suit a more modern visual style. However, the entire thing is scuttled by the animations themselves. The game retains the same animations of the older title, meaning that every attack is comprised of only a meagre handful of animation frames – something that looks quite natural and retro when playing the game in it’s original resolution (which I believe is/was 384×224 resolution), but is absolutely jarring when playing with the remastered graphic style. It meant that I really did rush to change the graphics back to its original incarnation, which is inconveniently tucked away in a title screen option menu (when many other games boast the option to swap between retro/updated on the fly, such as the Halo 1 remaster, or the newer Wonder Boy release).

By comparison, you would expect the remaster to be the more attractive option in all cases, but this isn’t exactly true

Beyond the jarring animation, there is also a fairly hefty disparity between some of the art assets. It almost feels like more experienced artists handled particular characters and the work experience kids were handed the leftovers. Cammy, a favourite of mine (and every horny teenager on the internet) has a swinging pendulum of sprite quality, where some of her attacks frames look amazing like they jumped off the page of a comic book – while others, particularly win poses, look downright awkward. Compare this to say, Zangief, the hairy-chested Russian known as the RED CYCLONE, who appears fantastic no matter what he is doing. It had me wishing the game had more in-depth options to possibly display specific characters in the newer sprites, while older characters could be relegated to their pixelated glory.

One particular piece of praise I can pile upon the newer sprites is definitely the option to customise your colour palette with a robust tool to change individual sections of a character, meaning you can try to replicate your favourite outfits from other games – in my case I could try and replicate some of the offcolor options from Street Fighter IV, particularly for character such as Chun Li, who I always preferred in pink over her standard blue.

Not a bad start…

…But I far prefer the pink.

Away from the fighters, the rest of the game’s ambience has benefited greatly from the remaster. The original backgrounds of the stages look fantastic, with every mountain vista or crowded street redrawn with beautiful clarity and animated brilliantly. In many cases, I actually felt that the backgrounds actually upstaged the characters themselves – Guile’s stage in particular (the airstrip) was always a simplistic background, but the remaster makes it so much more engaging. And of course, with the mention of Guile’s stage – we simply HAVE to mention the music. Feel free to play Guile’s theme now (it does go with everything, after all).

The remastered/remixed music in the game is absolutely perfect. Every theme on every stage is a brilliant recreation/rendition of the classic theme from the original release. In a mixed bag of ups and downs for this title, the music is top-notch, I cannot fault it.

The additional content is a weird combination of both surprising and disappointing. Allow me to first address the most intriguing piece of content provided with the game – the first person ‘horde mode’ known as “The Way of the Hado”. In it, you use motion controlled actions to shoot Hadokens and perform Shoryukens to defeat M. Bison’s thugs. The entire experience is awkward, plays very poorly and genuinely feels like a tech demo for a Wii U game that may have never been released, but somehow found it’s way here. I try to find a positive spin on anything that I don’t immediately enjoy – but I just can’t endorse this. Moving on. 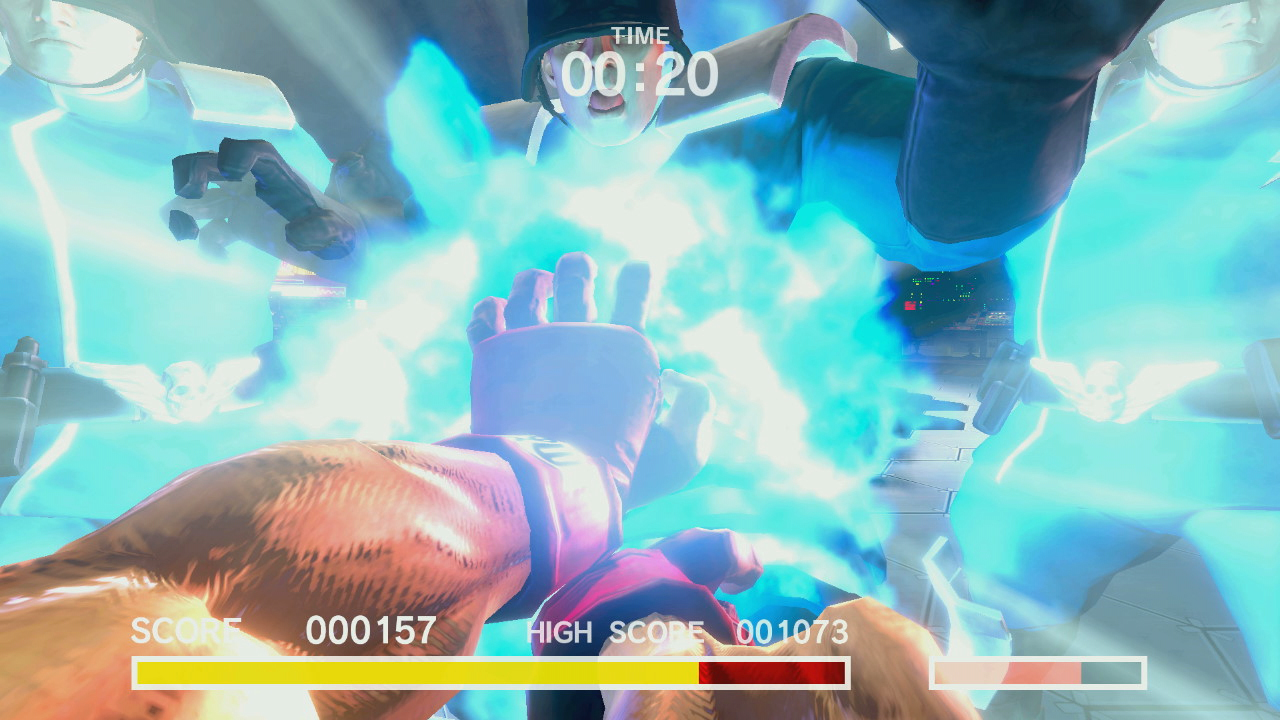 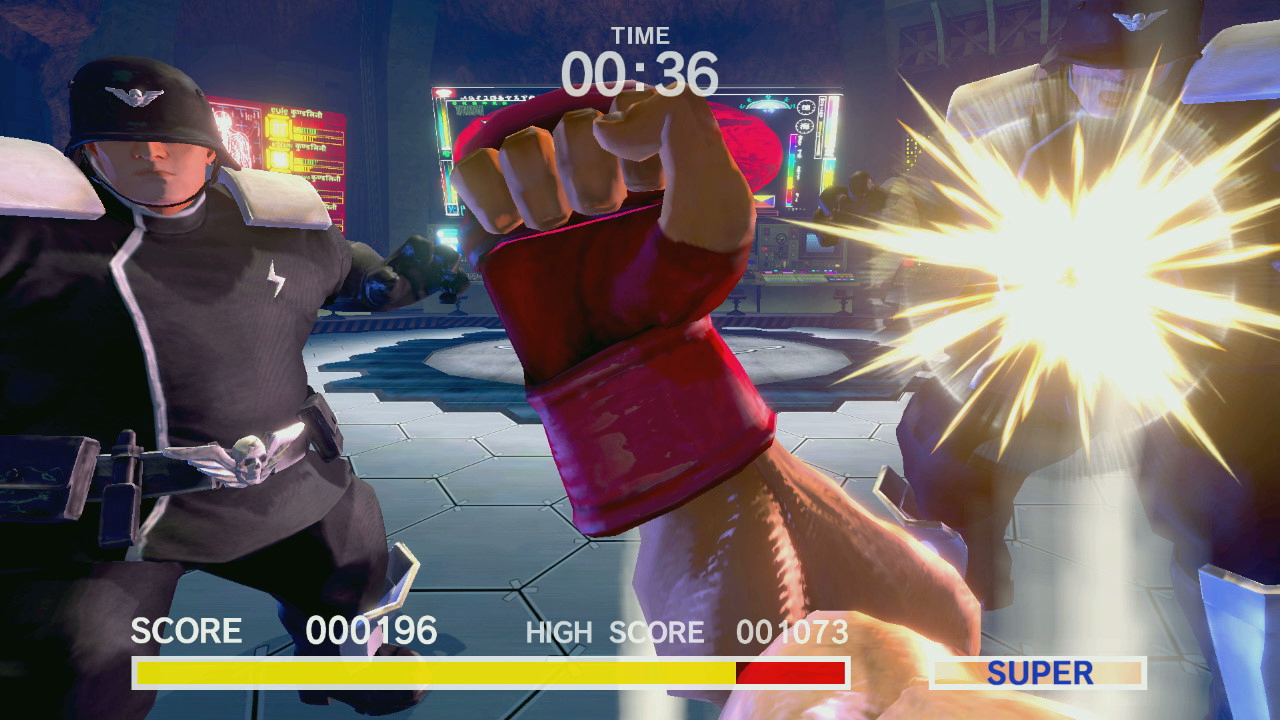 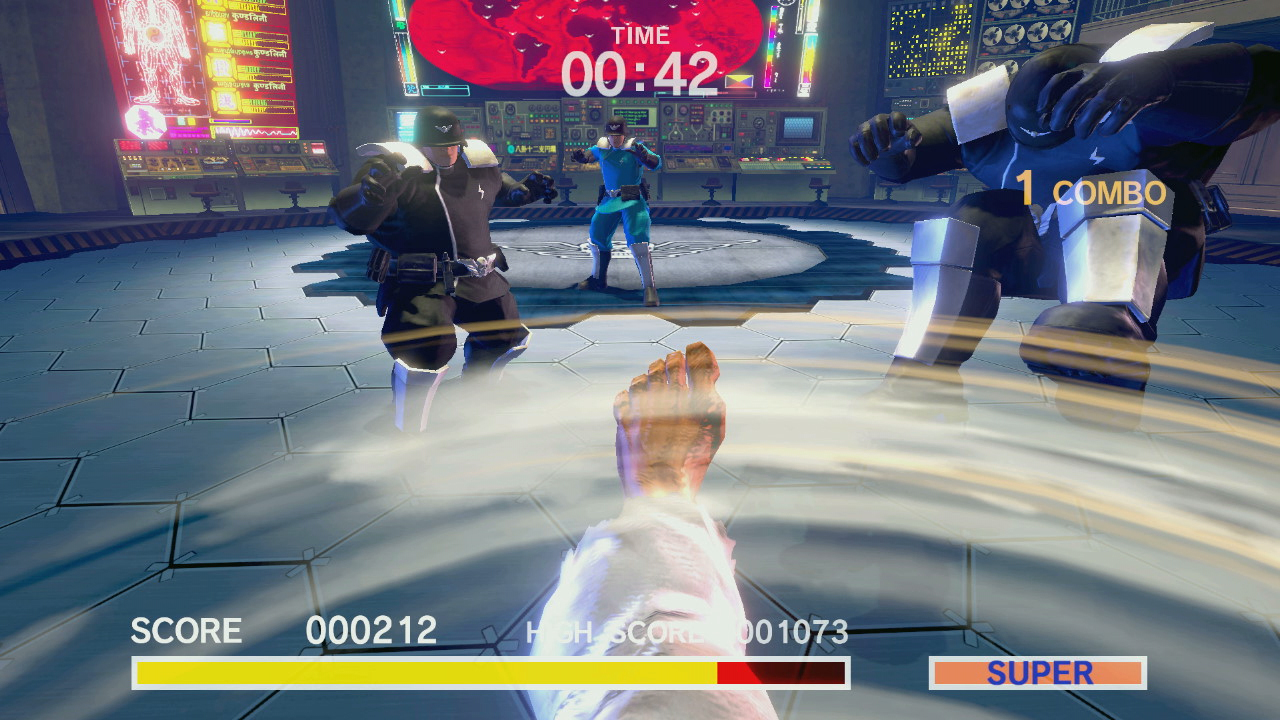 Do NOT be fooled, the screenshots make it appear a lot more interesting than it is

The game also features 2 ‘new’ characters for the roster in the form of Evil Ryu and Violent Ken. Evil Ryu has appeared in other Street Fighters games (including Street Fighter IV) whereas Violent Ken hasn’t officially appeared in a mainstream title. With updated sprites and some move switching, it’s hard to elicit any real response for them other than ‘meh’. Sure it’s nice to have some new faces – but when the faces are angry versions of existing ones it really drains the enthusiasm.

The ‘Buddy Mode’ option is a surprisingly fun addition – where you and a friend can team up to fight stronger AI opponents in the classic Street Fighter format. It’s oddly satisfying taking a playstyle that you have always known and turning it on its head where you can effectively cooperatively combine attacks. Since both players are on screen at the same time (rather than a tag-in system like other fighting games), you really can work to create a rhythm of attacks and combos that looks and feels super rewarding. Definitely a great couch activity with mates over drinks.

Finally, the game also has a fairly delicious range of incredible artwork provided in its gallery, a surefire hit for someone of my stature who enjoys pouring over the development process of a game, especially from an IP such as Street Fighter. The Gallery Mode features over 1400 illustrations, most of which I have never had the chance to see elsewhere. I have been told that a great many of them came from an artbook that was released some years ago, but their presence in the game is crisp and beautiful to look at.

Did I mention Akuma is freely available to play?

With remasters being such a well-defined entity in today’s world, there is plenty of titans for Ultra Street Fighter II: The Final Challengers to measure up against, and sadly it falls short against all of them. Not as pretty as you might expect, not as affordable as you’d like and not as feature rich as you might desire; this title feels like it will only find a home with the most die-hard fans.