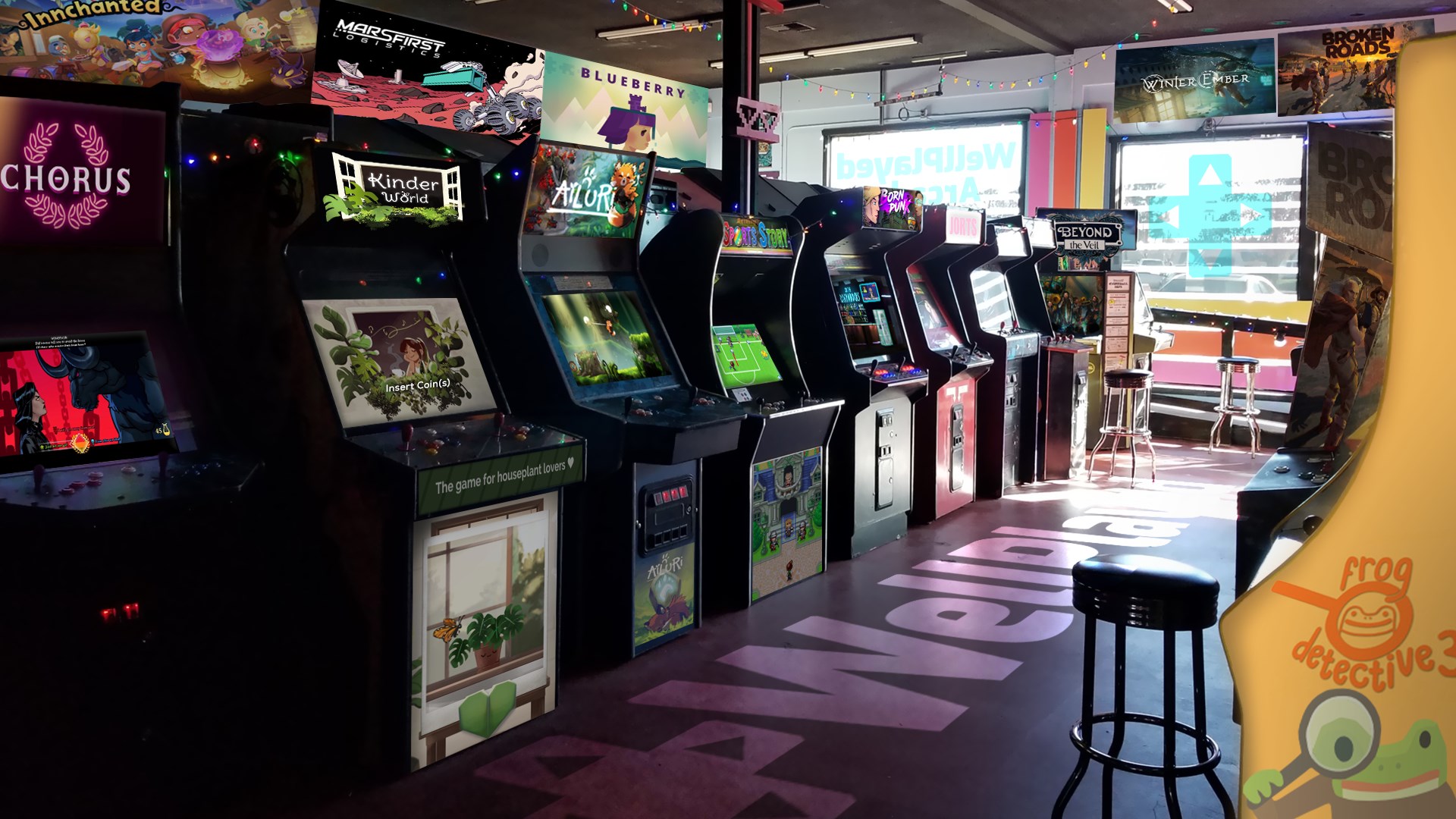 It’s no secret that we love our Aussie-made video games here at WellPlayed, and with each new year brings a veritable buffet (or barbie?) of new locally-sourced titles to look forward to. With that in mind, we’re keeping up our tradition of highlighting the games we’re most looking forward to in the year ahead from developers based in Australia. Unlike previous years though, our 2022 list is also now in written and video form.

Before we get started we’d also like to highlight the fact that, yes, there are a couple of notable omissions in this year’s list. If you’re wondering where the likes of games such as Wayward Strand, Dead Static Drive and Way to the Woods are – we’ve already spotlighted them in these articles in the past, before we realised they wouldn’t wind up releasing. We’ve got our fingers crossed they’ll finally see the light of day in 2022 but we also felt the need to give the space to some other games.

If you’re a fan of platformers like Ori and the Blind Forest, then Ailuri should be on your radar. Not only does it have some seriously slick animation and truly breathtaking hand-drawn visuals, but its titular protagonist is also an uber-cute red panda and the story focuses on raising awareness about endangered species. Melbourne-based Vivink Studios ran a Kickstarter for the game last year, smashing its $18k goal by raising more than $70k, triggering a Nintendo Switch release in the process. Definitely one to keep an eye on in 2022.

I’m normally not a fan of text-based games, but after playing the demo for Beyond the Veil from the Melbourne-based team Sun’s Shadows Studios during last year’s Steam Fest, I found myself pretty enthralled with the premise and its tone. It’s set in New Orleans and influenced by the rich history of the iconic southern city, seeing players take on the role of college dropout Kara, who moves back in with her dad. Players will have full control to shape Kara’s story with choices that affect the narrative and it reminded me of the choose-your-own-adventure Goosebump books I used to read as a kid (shoutouts to R.L. Stine), where readers would make choices and let their imagination run wild. This is exactly what happened when I played the demo; I could see the writing on the screen but my mind was visualising everything. Hopefully the full release can live up to its promise.

Blueberry, from Brisbane developer Mellow Games, aims to take players on an emotional journey that chronicles a life from birth to death. Climbing up the Tower of Life, you’ll need to manage Blueberry’s depression as you take her through her memories, make dialogue choices and take care of her basic needs. Don’t let the simplistic visuals and varied gameplay elements fool you into thinking this’ll be anything short of a tear-jerker, but Mellow Games does at least promise that their goal is to impart a sense of strength and hope on players by the end. I’ll be holding them to that.

Even as game design continues to advance and games get bigger, I’m still a sucker for a good old-fashioned point-and-click adventure. Backed by stylish pixel art, Born Punk is set in the fictional Baltic island of Bornholm in 2155, where a hacker, a corporate CEO and a malfunctioning android named Grandmaster Flashdrive have been possessed by mysterious entities. Together, this ragtag trinity must uncover the truth behind their possession by solving puzzles and making the right dialogue choices. It’s inspired by genre classics such as The Curse of Monkey Island and Beneath a Steel Sky, and having had a taste of what’s on offer I am excited to dive into the full release sometime this year.

If there’s anyone I’d trust to do a game set in Australia justice, it’s a studio with Drop Bear in the name. Developed by the Torquay-based Drop Bear Bytes, Broken Roads is a single-player narrative-driven RPG set in a post-apocalyptic Australia where a band of survivors explore and navigate the outback. It features turn-based combat and a unique morality system that will affect everything from the story and character development to the gameplay itself. Plus, its hand-drawn take on the Australian outback looks incredible. I’m very keen to put on my Akubra and jump into this one later this year.

Video game musicals are few and far between, but done right they can be an absolute blast. Summerfall Studios is based in Melbourne but its talent stretches across the globe, and it’s utilising that talent to put together a wholly unique musical project. Chorus: An Adventure Musical takes the expertise of former BioWare lead writer David Gaider to craft a narrative adventure game where your choices affect not only the story but the songs! With a score from Austin Wintory, voice direction from Troy Baker and starring none other than Laura Bailey, there is some absolutely immense talent and potential here.

Melbourne developer Worm Club (seriously, click that link and scroll to the bottom) is gearing up to release its third and final title in the beloved Frog Detective series this year, with Frog Detective 3: Corruption at Cowboy County. We’ve survived a haunted island, saved an invisible wizard’s parade, and now it looks as though we’re headed to the Wild West! With these games’ penchant for witty absurdity and diabolically-dumb situations I think it’s fair to expect a healthy helping of spaghetti with this Western when it comes to PC in 2022.

Innchanted is a multiplayer game that channels the fun and good times of titles such as Overcooked. Innchanted tasks you with running a magical tavern, where you’ll brew potions, cook food, and serve thirsty and hungry punters while trying to defeat your evil landlord. It’s got a cute and whimsical Indigenous Australian art style, which has been crafted by the diverse, queer, and Indigenous talent of Melbourne’s DragonBear Studios. If you’ve been looking for a new party game to play with your partner or your mates, Innchanted should definitely be on your radar.

Part game and part tool for self-development, Kinder World gives users a plant to nurture and a space to make their own, each led to flourish by players’ small acts of kindness towards themselves. Lumi Interactive has put a ton of time and work into discovering and harnessing the power of self-kindness, partnering with experts in psychology and following leading research to ensure this is both a mindful and powerful tool. The studio is also supporting small artists and creators by collaborating with them for in-game art and embracing revenue sharing, so every bit of support for Kinder World has immense reach. Lumi Interactive also has a charming and wholesome TikTok account if you’re keen to follow the journey.

Download the Early Access version of Kinder World on the Google Play Store or the Apple App Store.

Ian MacLarty is making what I can only describe as Banjo-Kazooie: Nuts & Bolts meets Death Stranding and I absolutely mean that as a compliment. Mars First Logistics tasks players with delivering cargo between outposts in an open world set on Mars (naturally), with the twist being that you’ll need to construct your delivery rover piece-by-piece from an increasing selection of parts and technology. From the looks of it there’ll be something here for engineering nerds and fans of physics-based slapstick in equal measure, and I know exactly where I fit in that spectrum.

Sidebar Games’ Golf Story was a surprise hit when it launched on the Switch all the way back in 2017. Fans have been plenty patient in waiting for the follow-up, but it looks like it’ll absolutely be worth it. Expanding on the golf-based adventure with even more activities including tennis, football, volleyball, dungeon diving, fishing and even stealth, Sports Story looks to up the ante in every conceivable way while retaining every bit of pixelated charm. Back in June of last year, Sidebar Games offered an update on the game’s protracted development by explaining that certain elements of the game got away from them in terms of scope but that they’re determined to see them through. Hopefully we finally see it this year, but also we’d be equally happy for the team to get all the time they need with this one!

Any game with a Victorian-esque setting is sure to catch my attention, but add stealth-based gameplay and you may as well take my money now. Winter Ember from Melbourne’s Sky Machine Studios ticks both those boxes. You play as Arthur, who returns to seek vengeance after the massacre of his family eight years prior. Sticking to the shadows and armed with a bow and over 30 types of arrows, Arthur must sleuth his way through the world to uncover the truth behind his family’s murder. Featuring an isometric view and a skill tree with over 70 skills, players can approach missions in several ways, with each approach having its own pros and cons. I’ve dabbled ever so briefly with the game and its core gameplay loop had me hooked, so the full release can’t come soon enough.

Australia has some absolutely cracking talent working on some truly exciting projects. While we may only have highlighted 12 games, there’s a ton more that are worth checking out. To keep up to date with all the Australian-made game releases in 2022, make sure to check out our Australian and New Zealand-made release calendar.

What Australian games are you keen for in 2022? Let us know in the comments or on social media.