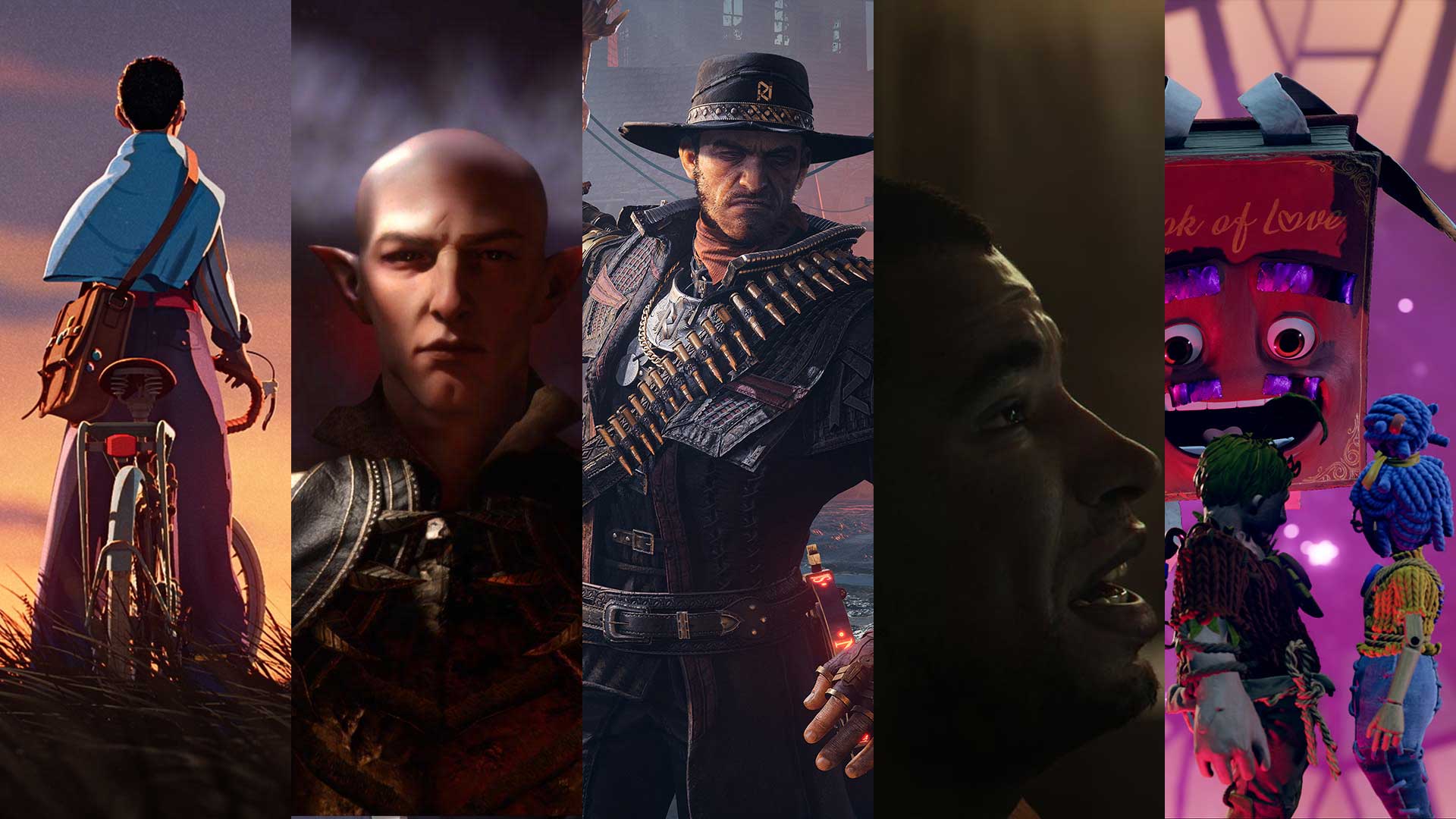 The Game Awards are always an exciting time thanks to a plethora of game announcements and reveals. 2020 appears to no different, with Mr Industry Geoff Keighley promising a myriad of announcements. If you weren’t able to watch the show live don’t stress, we’ve got all the announcements below for you to feast your eyes on.

A new roguelike game from Devolver Digital where players will “Strategically place building, terrain, and enemy cards along each loop to create your own dangerous path.” Due out in 2021 on PC.

Tchia is a tropical open-world adventure game inspired by New Caledonia (I’ve always wanted to go there). Coming to PC and Google Stadia in 2021.

Sea of Solitude: The Director’s Cut

Shady Part of Me

New narrative game from Focus Home Interactive and Douze Dixièmes where players alternate between and girl and her shadow to overcome emotional struggles. Out now on PS4, Xbox One, Nintendo Switch and PC.

The big cheese from Final Fantasy VII will grace Nintendo’s fighting game with his presence this month.

After what feels like an eternity, The Inititiative finally revealed its first project and it’s none other than the long-rumoured new entry in the  Perfect Dark series. Very few details were shared, but it got a tasty announcement trailer. Check it out below:

The new multiplayer game from Left 4 Dead and Evolve developer Turtle Rock Studios, Back 4 Blood is essentially a new Left4Dead title with a different name. The studio showed off a gameplay trailer showing off what to expect from the game. While it doesn’t look like anything new by any stretch, it certainly looks like it’ll be a ton of fun with mates. Coming to PS4, PS5, Xbox One, Xbox Series X & S, and PC on June 22, 2021. Check out the trailer below:

Upcoming medieval PvPvE multiplayer game from Focus Home Interactive and Sumo Digital Hood: Outlaws & Legends was given the gameplay trailer and release date treatment. Scheduled to hit PS4, PS5, Xbox One, Xbox Series X & S, and PC on May 10 (pre-ordering will give you access on May 7), Hood looks like a good time if you can get a good crew together.

With the world going mad for Cyberpunk 2077, why not try and get it in anything and everything possible? CD Projekt Red and Microsoft have come to an agreement that will see Cyberpunk’s 2058 Quadra Turbo-R-V-Tech be available for free in Forza Horizon 4 as of now.

New game from Glen Schofield, one of the creators of Dead Space, and his new studio Striking Distance Studios. Set in a prison colony on Jupiter’s dead moon Callisto, The Callisto Protocol is a third-person, single-player survival horror game that is aiming to be the “scariest game ever”. It certainly looks like it could deliver the goods thanks to its intriguing trailer. Slated to hit consoles and PC in 2022.

The newest Warhammer video game from Fatshark, developer of the Warhammer: Vermintide games, is Warhammer 4K: Darktide, a first-person action spin on the IP. The gameplay trailer gave Warhammer fans a glimpse at what to expect from the game, and for someone who has never gotten into Warhammer, I got to say the game does look kind of cool. Warhammer 40K: Darktidewill be available on PC and Xbox Series X & S in 2021.

A gorgeous looking game from Fullbright (of Gone Home and Tacoma fame) about the tale of mother and daughter who seek to uncover lost family secrets – it has Kieron Verbrugge written all over it. Has a hint of What Remains of Edith Finch about it, which if it’s anything like that will be a corker of a time. Announced for consoles and PC.

One of 2019’s biggest hits, Disco Elysium was previously only available on PC and Mac, with the promise of a console port to come at a later date. The result of that promise is Disco Elysium: The Final Cut, which will feature full voice acting, improved playability, new political vision quests and more. It will be a free upgrade for current owners of the game on PC, while the game will launch on March 21, 2021 on PS4 and PS5, as well as Google Stadia. An Xbox Series X & S and Nintendo Switch release will occur during the Winter 2021 window.

One of the most anticipated reveals of the event, Dragon Age 4, got a new cinematic teaser trailer that gave fans a brief insight into the new project’s direction. Narrated by Dragon Age 2‘s Varric Tethras, he says that “It’s time for a new hero,” insinuating that players will take control of a new protagonist in DA4. No information on when players can expect the game was given, but given the recent high-profile departures at BioWare it wouldn’t be surprising if it was a ways off.

A roguelike from Amplitude Studios and SEGA set in the Endless universe, Endless Dungeon tasks you with recruiting a team who will then defend your crystal from waves of monsters. Announced for PS4, PS5, Xbox One, Xbox Series X & S, Nintendo Switch and PC. No word on release date though.

A beautiful looking fantasy MMO with some fairly brutal combat shown off. Sweeping vistas, puzzles, exploration, huge boss encounters, this announcement provided the goods with a nice, long trailer that gave us a look at what to expect from the new online title. Crimson Desert is scheduled to launch on consoles and PC in Summer of 2021.

Overcooked! All You Can Eat

During an…interesting reveal, the Swedish Chef is now available as a playable character in Overcooked All You Can eat as free DLC. You can download it now for PS5 and Xbox Series X & S.

The popular MMO is getting into bed with Epic’s Unreal Tournament for an…epic crossover. Not only will exclusive skins be available, but some of Unreal Tournament’s iconic weaponry such as the Flak Cannon, Shock Rifle and the Rocket Launcher are all coming to Warframe, and for free.

Another game with Kieron Verbrugge’s name all over it, Season is gorgeous-looking PS5 exclusive and “third-person atmospheric adventure bicycle road trip game,” where the main character, a young woman, will explore the world for the first time collecting artifacts and memories before they are all gone.

Rightio, this was a strange one. First we get Vinny D himself in full tribal getup fighting some monstrous fellas before a huge dinosaur crashes the party and starts eating people all over the shop. Cut to a cave full of futuristic technology and it becomes clear that we have a sequel to Ark on our hands. With big Vin Diesel involved it has to be a winner.

An Ark Animated Series was also announced with heaps of big names involved, so look forward to that.

Season 3 is coming December 15 and brings with a bunch of winter fun.

A first look at the gameplay for Elite Dangerous’ first-person title was shown off next, accompanied by David Bowie’s Major Tom. It was only a brief look, but it looked promising. Coming to PS4, Xbox One and PC in 2021.

Saber Interactive are bringing the popular horror film franchise to the small screen. We got a brief look at what to expect from the game launching in 2021 on PS4, PS5, Xbox One, Xbox Series X & S, Nintendo Switch and PC.

The brutally difficult platformer is getting remade, so get keen to lose your clothes with one hit. Get your armour ready as it releases on Switch on 25 February, 2021.

Ooh yeah, Returnal looks absolutely mint. I can’t wait to play it and I won’t need to wait long as it’s releasing on PS5 on 19 March, 2021.

More Super Meat Boy is never a bad thing, just ask Dylan Blereau. Super Meat Boy Forever is coming to PC on December 23, 2021, and other platforms at a later date.

A Way Out developer Hazelight’s latest co-op adventure. This time the duo in need are a married couple having issues who have been turned into dolls and must repair their relationship to break the spell. Announced to hit PS4, PS5, Windows PC, Xbox One, and Xbox Series X on March 26, 2021. Once again the game will include the ‘friend pass’ which will allow a friend to play the game without having to buy a copy.

Capcom unveiled some new footage for their upcoming Nintendo exclusive, Monster Hunter Rise, during The Game Awards. There was actually a surprising amount of info in this trailer. A few more of the newer monsters were shown, we got to see some more of the interactions between the hunter and their animal helpers (including the new owl friend who tracks monsters for you). One of the bigger things of note, however, was the inclusion of voice acting in the game for its storytelling. Monster Hunter Rise releases exclusively for the Nintendo Switch on March 26, 2020.

Evil West is a new IP from Focus Home Interactive and Shadow Warrior developer Flying Wild Hog set in the wild west of America with a supernatural twist and gave off massive Darkwatch vibes. Evil West is a narrative-driven action game that can be played either solo or in co-op. Coming to PS4, PS5, Xbox Series X, Xbox One and PC in 2021.

A new trailer for Scarlet Nexus, the anime action title, was shown off next, giving us a look at lots of new, action-heavy gameplay. Coming to PS4, PS5, Xbox One, Xbox Series X & S in 2021.

This announcement is suss. Among Us is getting a new map early 2021 and it’s an Airship. This new map will allow you to choose which room you want to start in after meetings, it features ladders and shortcuts and there will also be brand new kill animations. Plenty to look forward to, just remember that there’s an imposter floating around.

Fortnite has been hoovering up hunters all over the place and Master Chief is now part of the list. From tonight you’ll be able to purchase The Chief skin and finish the fight. That’s not it though, also from tonight you’ll be able to play in classic map Blood Gulch in Fortnite, playing a modified version of capture the flag. Good old Red vs Blue will no doubt be involved, just as they were during the reveal. Refusing to quit, Fortnite is also getting Michonne and Daryl Dixon from The Walking Dead as skins.