Ever wanted to punch someone from 10 metres away?

In a generation without a Punch Out title, it’s great to see Nintendo still packs a mean right hook. ARMS on Nintendo Switch is an action-packed colourgasm of extending fisticuffs, with a dash of strategy and a heavy helping of arm flailing nonsense – at least when I am playing it.

The game’s ‘hook’ (ha, geddit) is that it is all about range and angles as you try to hit your opponent with manoeuvrable flying fists. Coupled with some simplistic movement controls (including some quick directional dashes and the option to jump), you have a set of mechanics that any schmoe can pick up and play in moments, or optionally spend hours truly mastering. The angles come into play with your ability to actually influence your flying fists’ flight path by tilting with the motion controls or the control stick. This allows your punches to come at your opponent via their flank, or even curve upwards as a crazy springy uppercut if they have taken the high ground. This turns an otherwise generic biffo game into something truly crazy, and it works beautifully.

Though the game comes set up to play with motion controls, I definitely didn’t find myself in a rush to change the control scheme. The motion-based combat and movement felt snappy and intuitive – and I was genuinely impressed to finally encounter motion controls that didn’t feel like they hampered my ability to play. I was even surprised that on higher difficulty levels I still felt like I was performing competitively, and a brief amount of time spent playing with regular button controls confirmed that it really was a coin flip for me – neither scheme truly felt superior to the other, and both could be enjoyed. I will mention however that the motion controls did tire me out faster, but that’s because it is fairly close to exercise when you are making repetitive punching motions in the air. Also I am an unfit piece of human garbage.

With incredible visuals and a unique gameplay experience, ARMS is an exemplary example of what the Nintendo Switch is capable of

ARMS seems to have been born from the same school of thought that gave us Splatoon – the idea of interpreting a genre that is known to err on the side of dark and edgy with every incarnation, and instead blow it wide open with an unobtrusive gimmick and a set of eye-pleasing visuals that allows the entire family to get involved. At its core, ARMS really is a fighting game – and in 2017 this is a genre defined by titles like Injustice 2 or Tekken 7, so you can imagine how awkward that must look when you sit them side by side. And the things that make it so different are precisely what makes it so appealing. Both Injustice and Tekken are fantastic games – but ARMS is an entirely different beast.

Shooting birds at people is a valid strategy in futuristic boxing

The roster of characters within the game are unlike anything I have seen before, with beautiful designs and downright weird stuff going on that you can’t help but love. Spring Man is a ‘Little Mac’ influenced dude with a toothpaste hairstyle, and may well be the most ‘boring’ character in the game – if you could call him that. Alongside dudes like the Gumby-inspired Helix, The Hair-punching Twintelle and Cheerleader chin-decker Ribbon Girl, it’s hard to quantify anyone in the game as ‘boring’. Every character is unique and interesting, with their own special gameplay element to ensure that they are so much more than their visual selves. It says a lot about a person’s play style based off who they prefer, but I am not ashamed to say I played Twintelle because the idea of punching someone with my hair while looking fabulous appealed to me a great deal.

This brings us to the arms themselves. Though you are primarily throwing fists at your enemy, you can actually customise your loadout with differing fists that have unique effects or abilities. Every fighter has a set of three unique arms to start with, and you can actually have a mix and match between your left and right arms. Maybe you want to mix it up with a particular arm that is designed to disorientate or even blind your opponent, with your other option being a heavy hitter or quick flying face slapper. My time playing as Twintelle saw me utilising a set of arms that shot little birds out of them at range, providing my opponent with only a tiny window of opportunity to block me, so I could roll in deep with lots of small, quick attacks. Death by a thousand cuts was working for me – right up until I encountered a Helix who was happy to shoot goo all over my screen, effectively blinding me. That didn’t end well for me at all, but it did prompt me to rethink my choice in arms to instead work at blocking his attack – a well-placed punch of your own can actually knock your opponent’s blow clean out of the air before it even hits you. You can even get more unique arms right from the in-game ‘Arms Getter’, which fills your slots with more unique punchables.

As you might expect, being a fighting game means you will definitely want to face off against other human beings, and a standard suite of options is available to allow just that. Local multiplayer is a no-brainer, but the real shining star is the online lobby system. Playing against others online sees you form a lobby, and members of that lobby will play against each other concurrently. As you play during your session, you will earn points based off your wins and losses, and these will represent a form of ‘true scale’ skill-based matchmaking. Having a particularly good hot streak of wins? The game will pair you up against a similar arse kicker in the lobby, and the two of you can duke it out. Sucking a fat one today? Or maybe the sun was in your eyes? Don’t worry, the game will pair you up with someone having the same bad time and you can flail together. For someone with such a wildly varying skill level such as myself, it was refreshing to feel like the game wasn’t measuring my performance at a massive spanning level, instead focusing more on that lobby, on that day. It really is a fantastic concept that I can’t appreciate enough. 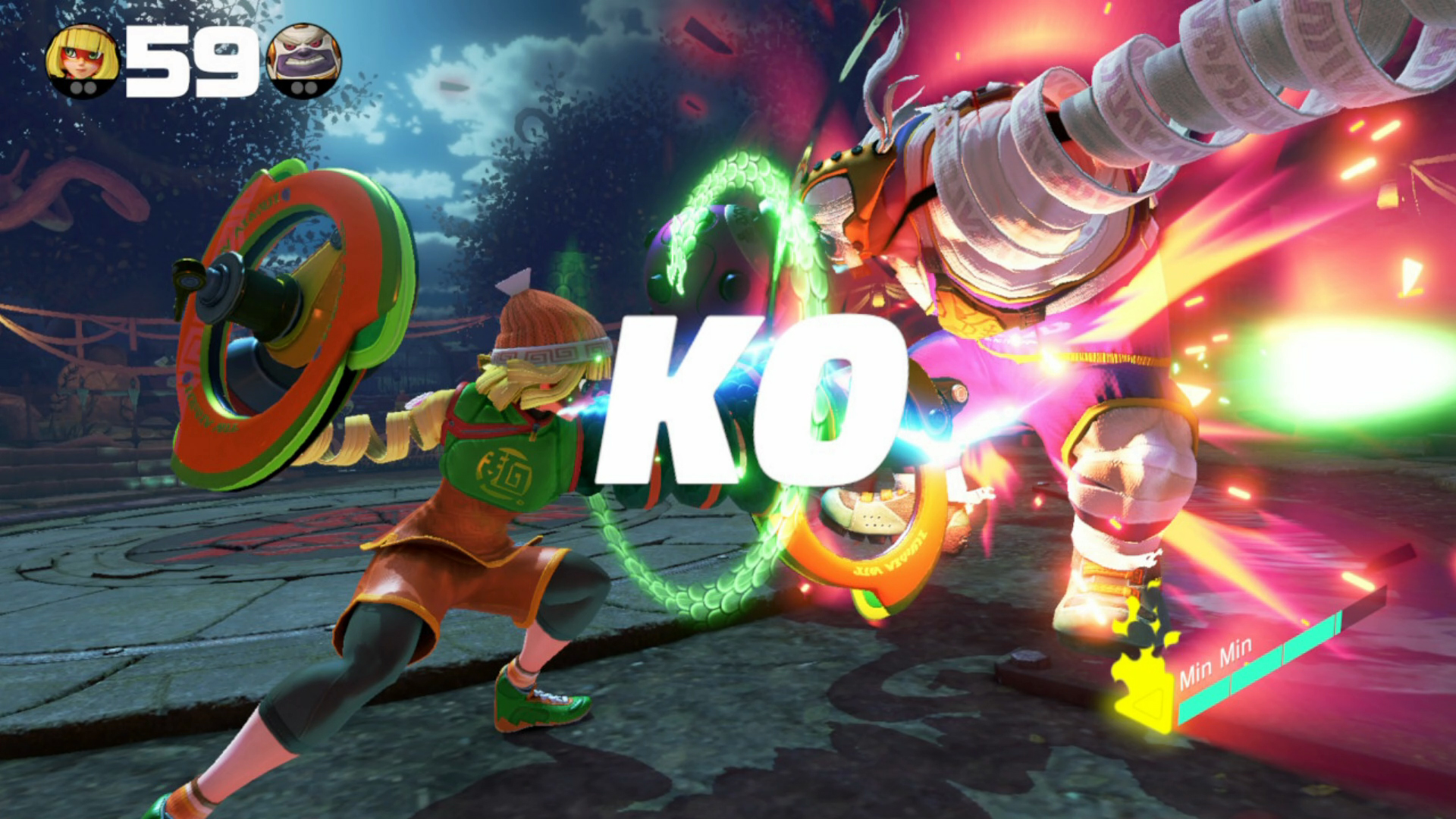 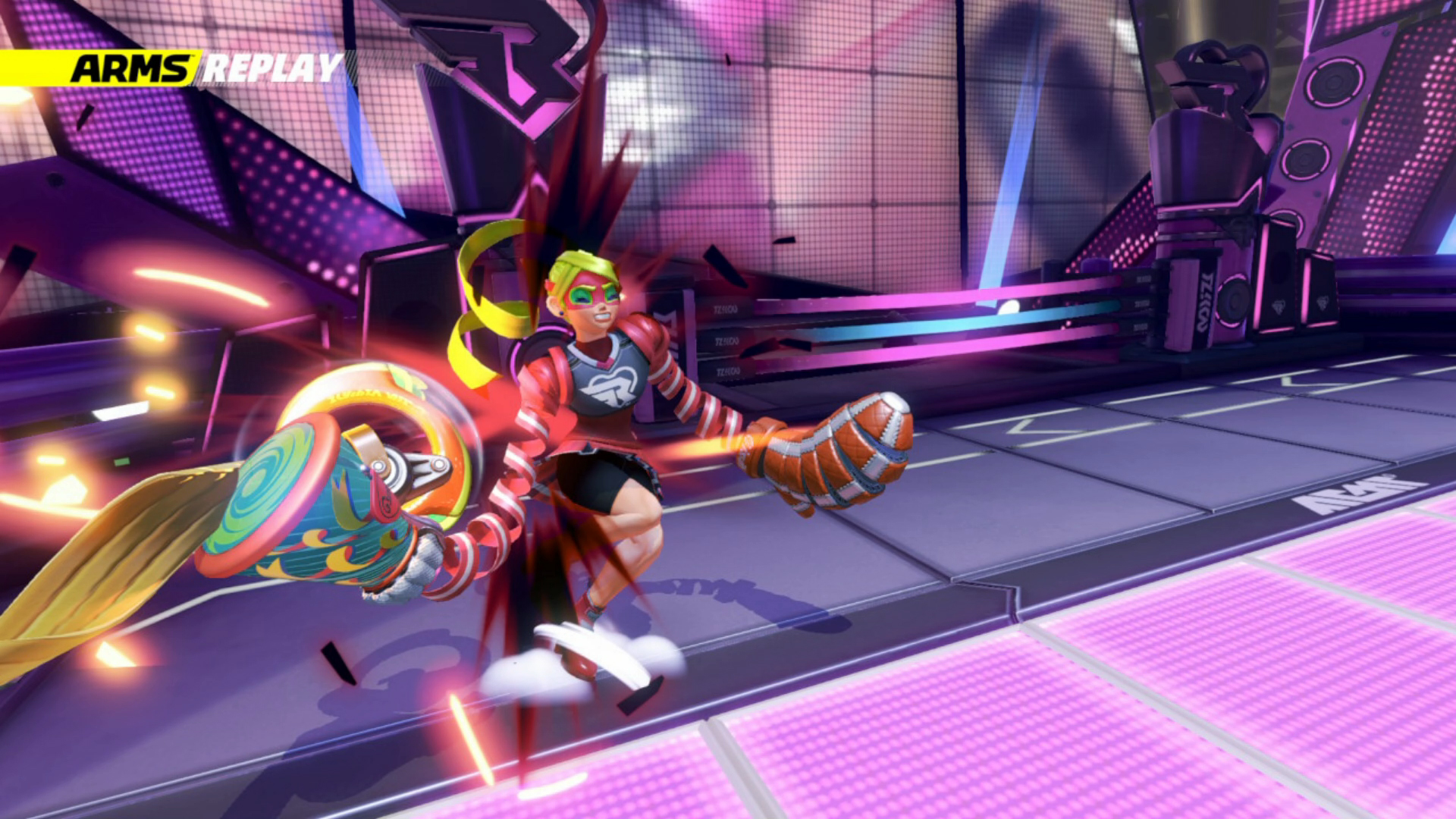 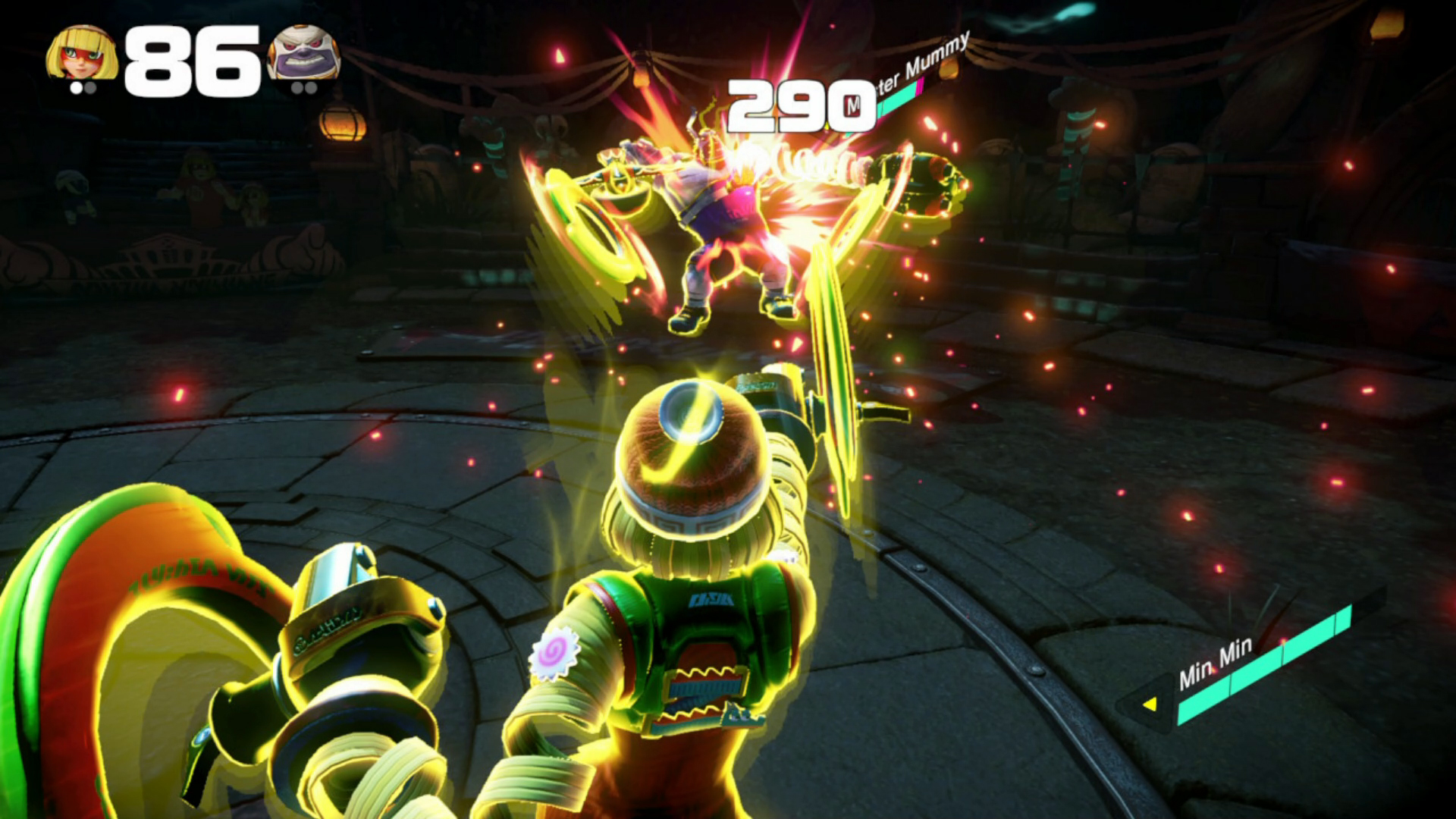 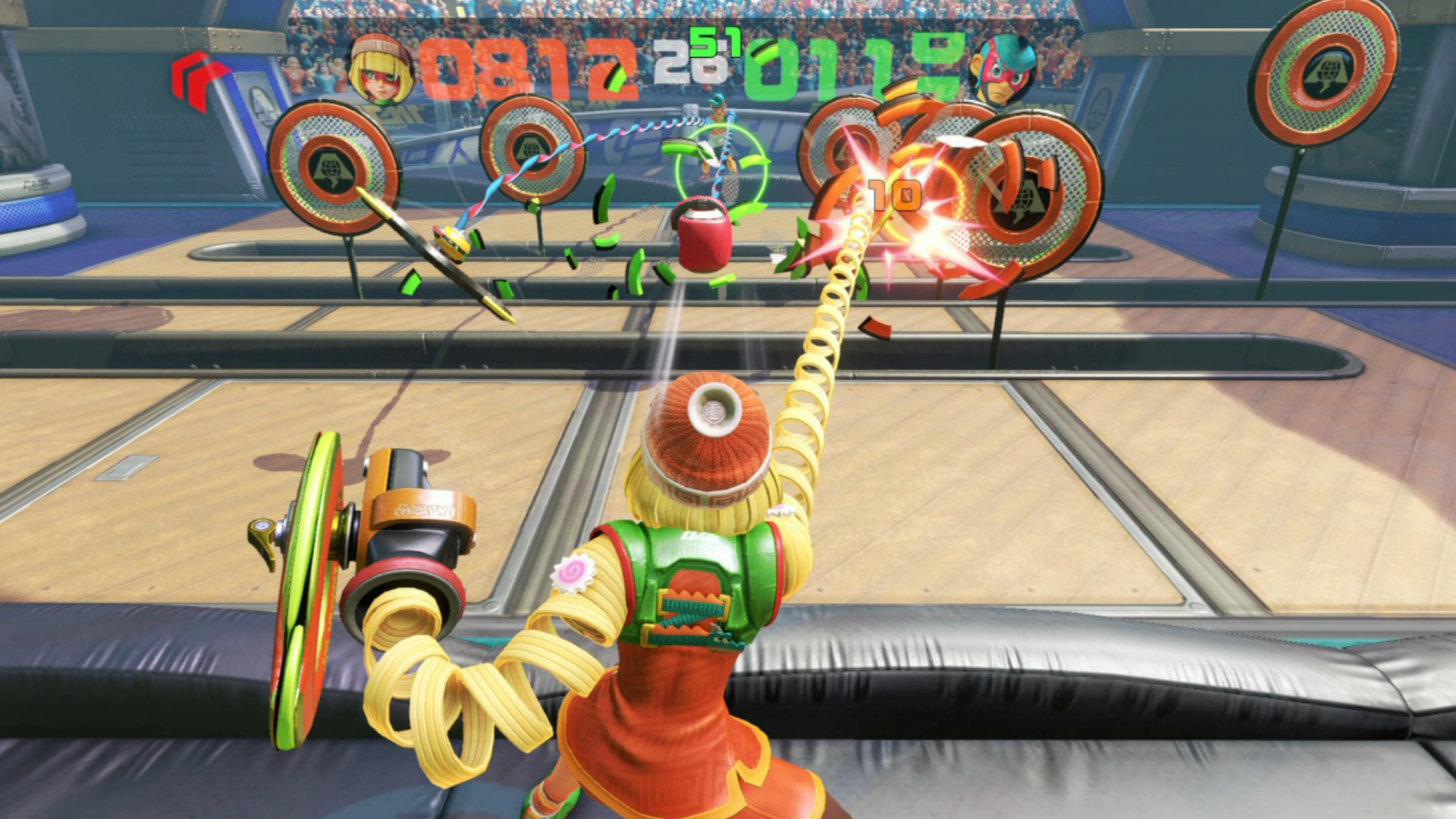 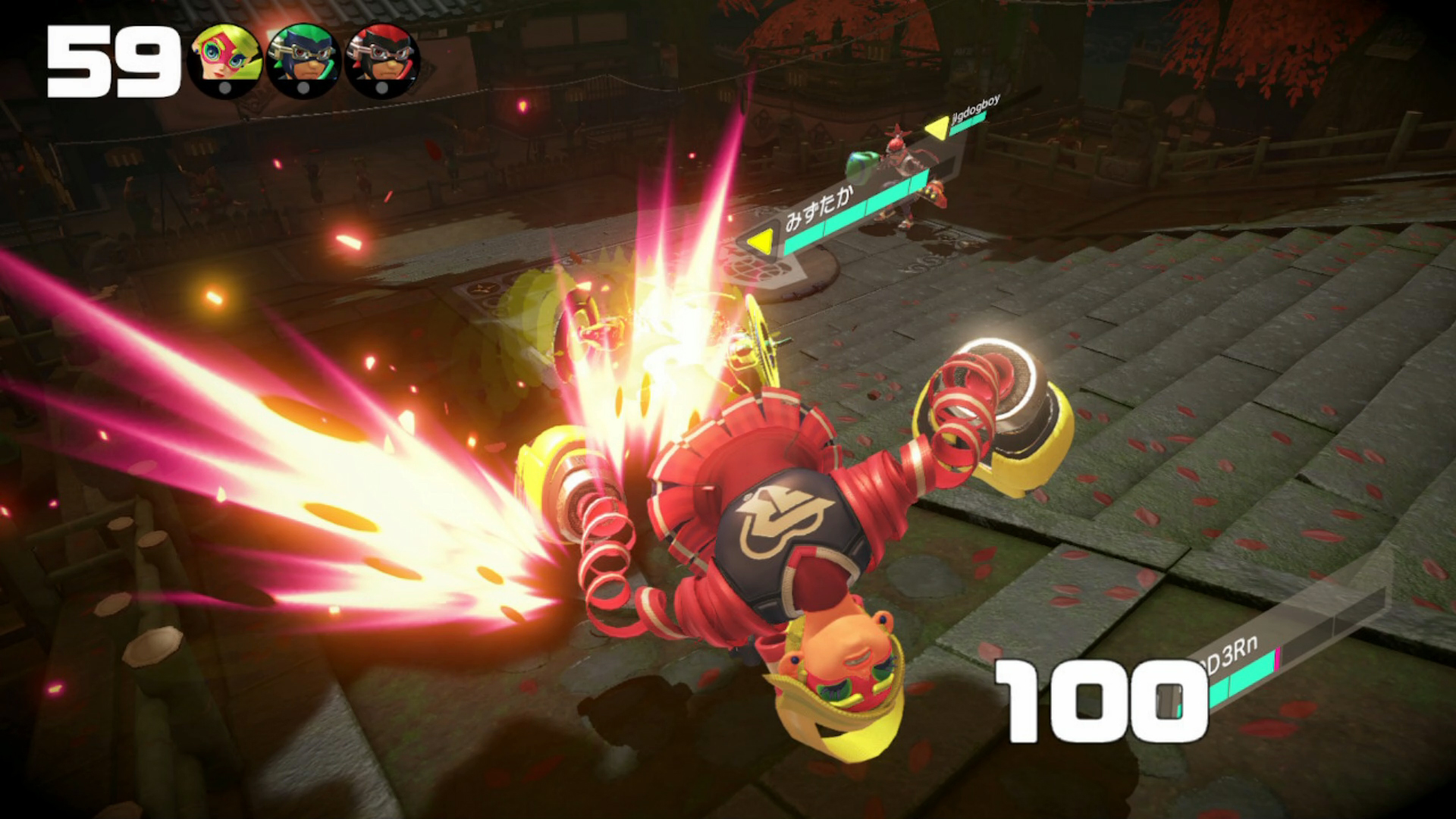 Though the game sports a range of game modes, brilliant characters and many fun/exciting varieties of punching weapons – I still can’t shake the feeling that the game feels a tiny bit lacking. The actual single player component of the game for example is an exceptionally simple arcade mode that allows you to verse a number of opponents in a traditional sense. It plays out exactly as you might expect an older style Street Fighter game would, with no real narrative or form beyond ‘beat your opponents’ and become the true champion. You could argue that this is a fairly standard practice for a game of this type, but again to use my previous point – living in a time and age where games like Injustice 2 feature a phenomenal storyline that encompasses these same fights, you could imagine that something basic could have been added to the single player to give it a little extra zing. I am somewhat conflicted with this criticism however, if only due to Nintendo being exceptionally transparent in announcing that the game will receive post-release support in the form of additional content, entirely for free. It does work to balance it out – as it is only a very minor gripe.

My god, they have weaponised fidget spinners

Doing to fighters what Splatoon did to shooters, ARMS represents a unique launching point for a generation of people who may never have considered playing a fighting game before. With incredible visuals and a unique gameplay experience, it is an exemplary example of what the Nintendo Switch is capable of.