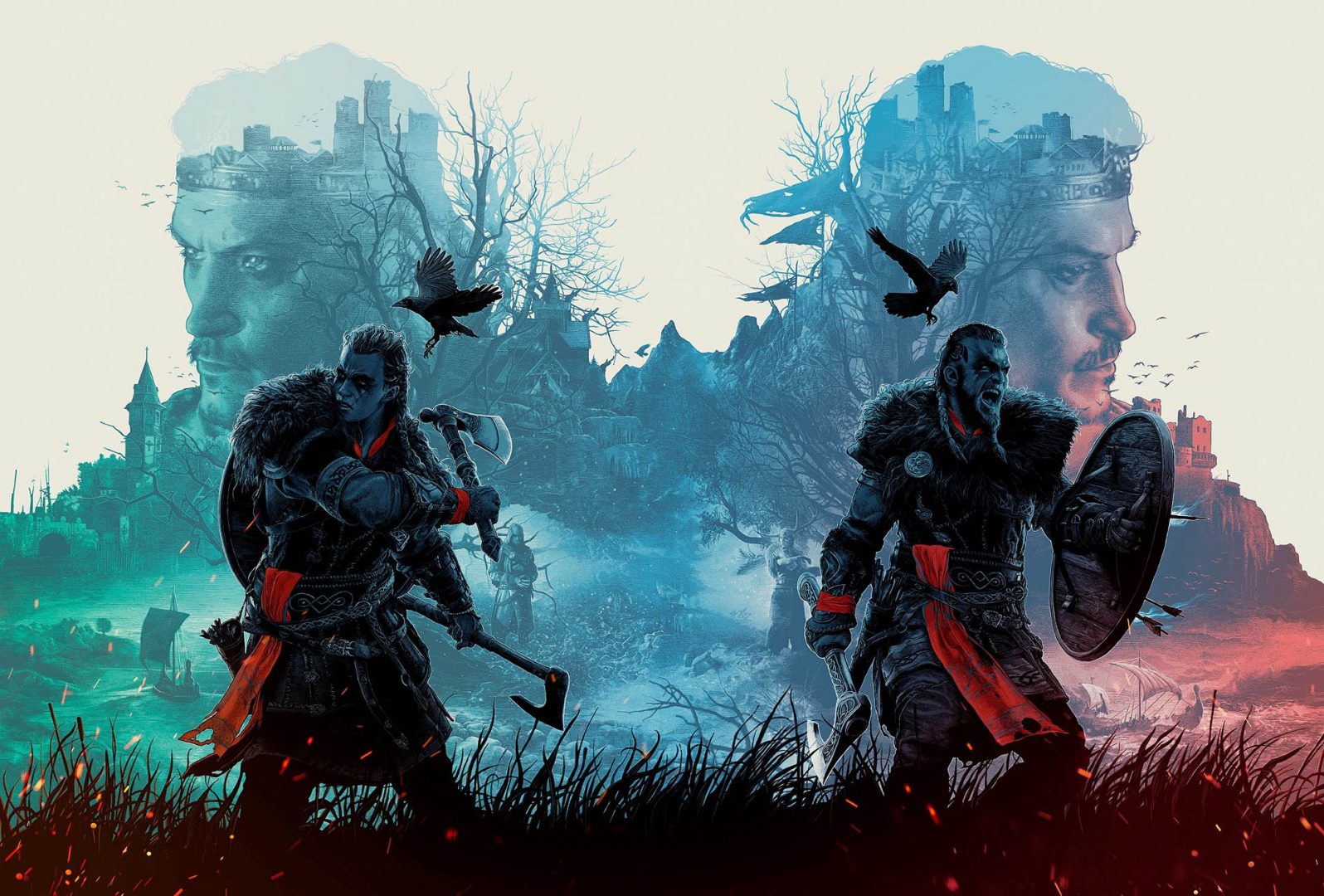 Drinking competitions, rap battles and geeky dice games. No, I’m not describing my 25th birthday party, these are just a few of the things I got up to in my four hours playing Assassin’s Creed Valhalla this week. Going into my preview session I had one goal – to determine if this would be the Assassin’s Creed game that finally, completely burned me out on the series or if it would manage to break out of the mould established by Origins and Odyssey. I won’t lie, I had reservations, but by the end of my time I didn’t want to put the controller down. Valhalla has the potential to be my favourite entry in the franchise yet.

Set in 9th century Anglo-Saxon England, at the height of infighting and contention over kingdoms, the game sees a Norse Viking, Eivor, take their clan to the nation to settle a new home. Of course, being an Assassin’s Creed game, the Assassin Brotherhood as well as those pesky Templars come into play. That’s about as much as I could glean from my three-and-a-half hour preview session, but I also get the impression that Ubisoft’s focus with this new game is to tell smaller, self-contained stories within each of England’s regions and allow players to tackle these at their own pace and in their chosen order.

Despite arguably being less of a turning point for the series than Origins was, in practice Valhalla actually does a fair bit to shake things up. For one, gone are the thousands of little icons scattered liberally across the world map like little seeds of content for the ravenous gamer masses to gobble up. Now, points of interest show up as a series of colour-coded markers visible either when Eivor syncs up a reach-high point, uses their Odin’s Sight (think Eagle Vision) or sends their raven out to scope an area.

These markers don’t explicitly advertise their quarry, but their size and colour denotes the scope of both the challenge and the reward involved. For example, a small Wealth marker could point to a basic treasure tucked away in someone’s house, but a large or prominent Wealth marker at a monastery or village probably means there’s a huge cache there worth invading for. It’s not always loot either, it could be a mini-challenge or even a self-contained new story to engage with (more on that later). There are, of course, still plenty of icons to help guide players to useful things like shops, synchronisation points and even a few interesting mini-games, but the overall effect of the changes is transformative. The draining box-checking and chaotic information overload of the old is gone, and Valhalla feels instantly better as a result.

That’s not to say the game world isn’t still huge and full of things to see and do, with even the single area I could access playing home to a wealth of content. There’s a subtle difference though, that I struggle to articulate without the context of the full thing, but in essence it all feels a lot more rich than I expected. The game world seems more densely packed in small pockets, but the stretches of hills, rivers and wooded areas separating major areas are wonderfully calming, and I can say with confidence that I don’t miss the scattered islands and vast, empty sea that Oydssey is built from.

So, about those rap battles. Flyting, as it’s called, is a concept I was completely unaware of before now, but I am one hundred percent here for it. Entering into one of these exchanges sees Eivor square up in a battle of verse, exchanging rhyming insults with their opponent until one is sent packing with their pride (and wallet) in tatters. It’s one of many lighter moments that I stepped across in my hands-on time, which is encouraging to see in such an otherwise grim setting. Another neat distraction, a combative dice game called Orlog, proved to eat into a fair chunk of the allotted hours I had to spend with Valhalla. That’s less of a fault of the game though and more my determination to not let the Ubisoft representatives watching my session see me fail horribly. I did fail, though.

In keeping with the theme of avoiding the open-world fatigue creeping in from the last two games, Valhalla has seemingly also done away with handing players a laundry list of side quests to rack up as they roam the game world. Like the Wealth and Secret markers, Mysteries are subtly signposted with a coloured marker on the map, but more than a simple reward for the finding these seem much like a replacement for traditional Assassin’s Creed side quests.

I managed to come across a few of these, ranging from helping some hapless Vikings-in-training practice raiding an abandoned property to deciphering the password to an underground fight club and (naturally) joining up as a member. The beauty of these is they feel far more organic, not least because bumping into one doesn’t instantly mark it on some list of shame to constantly remind you of everything you’ve failed to achieve. It seems, from what I played, that you’ll be free to engage with, leave or return to these self-contained stories at your leisure.

We need to talk about this particular encounter, though:

I have to admit, a huge grin grew across my face the moment Valhalla’s stealth mechanics were introduced to me. Eivor will inevitably need to enter areas where they, or their people, are not welcome and risk being attacked if they hang around. These Distrust Areas, as they’re called, require a degree of care to navigate stealthily, as well as the use of some classic Assassin’s Creed tricks. Eivor can cloak up from an option in the game’s radial menu, as well as blend into certain crowds and tuck themselves away on a bench to avoid detection. That’s right – social stealth is back! Combine that with the return of the Hidden Blade, and add it to the many traversal improvements that the recent games have made and this definitely feels like a ‘best of’ situation when it comes to stealth play, which excites me greatly.

When it does come time to smash some skulls, Eivor seems to handle as adeptly as expected. Combat isn’t far removed from the recent games, though the added boon of being able to dual-wield any weapon is very welcome. There are also some neat contextual wrinkles like a ‘Stomp’ action that can be used to kick enemies while they’re down, which winds up being very satisfying to use when fighting alongside your Viking crew mates in a raid. Combat is at its best when partaking in Assaults, specific gameplay instances that see your clan are storming larger keeps with strength in numbers (and in gloriously-fun battering rams).

In keeping with the theme of efficiently carving down each and every one of my reservations like they were Anglo-Saxon heads meeting the end of a Viking warrior’s axe, the sailing component of Valhalla surprised me by being… enjoyable? I know there is a large portion of the Assassin’s creed fan base out there that adores the series’ naval stuff, but I’ve traditionally loathed it. It’s why Black Flag is the only mainline title that I’ve never finished. One of my favourite features is the ‘Press [button] to raid’ prompt that appears when your longship steers close to any kind of establishment ripe for the raiding. Pressing the corresponding button causes the boat to course correct toward said location and beach, while your crew of bloodthirsty Vikings spills out and sets to raising absolute hel. It’s also possible to wind things back completely to a far more chill place, and hand command of the longship over to your crew so they can do the driving and Eivor can just kick back, enjoy the scenery and listen to viking songs and stories.

I definitely still have a fair few questions and concerns about Valhalla that won’t be answered until I can sink significant time into the game, particularly around the gear and progression systems, which seem like an improvement from my brief look in but still have the potential to do me dirty with money-grubbing antics like the last two games. Signs are very positive so far though, so I’m very keen to see more.

To sum up, Assassin’s Creed Valhalla has completely thrown my end-of-year gaming plans by all but winning me over with just a few short hours of hands-on gameplay. What I once might have dunked straight into the backlog, I’m now eagerly awaiting to dig into on day one. I was so concerned with Valhalla not breaking the mould set by its forebears that I’d dismissed the possibility that the mould is just fine if you finesse it a little. I thoroughly enjoyed my time with the game and I can only hope that feeling extends to the full thing.