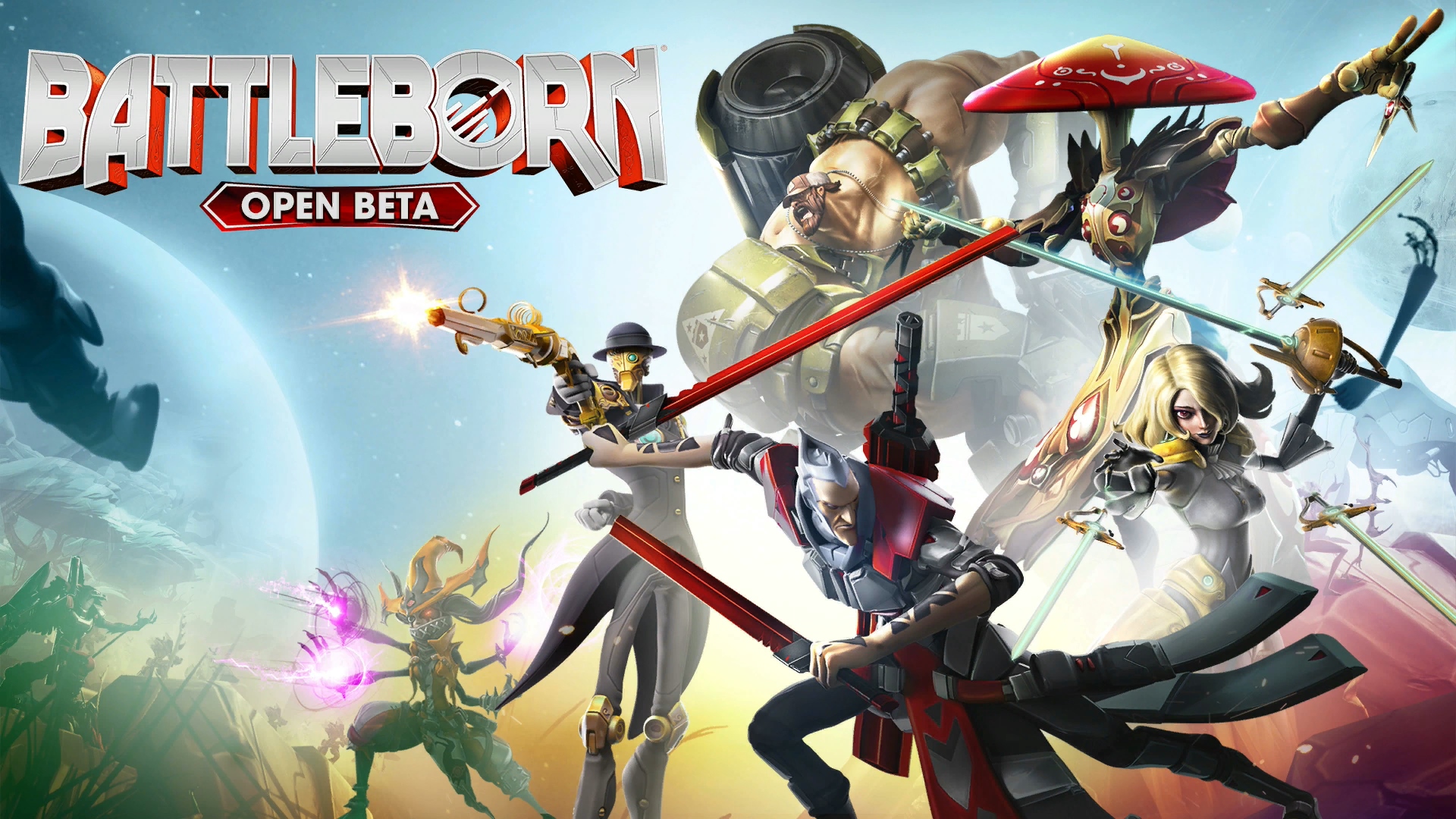 The Battleborn open beta has been in full swing for almost a week and we’ve put in a fair amount of hours to see what it’s all about. Battleborn is essentially a shoot and loot/MOBA hybrid from developers Gearbox Software that seeks to combine elements of the popular Borderlands series with the MOBA stylings of games such as League of Legends, Heroes of the Storm, DOTA and Smite. It’s clear that publishers Ubisoft are keen on cashing in on the popularity of the MOBA genre (and its particularly lucrative eSports elements) while stamping it with their own flavour. I’ll be the first to admit that Battleborn wasn’t really on my radar, but after many hours I must say I’m pretty impressed with the title. It promises a level of depth that will appease fans of the MOBA genre but maintains a level of accessible fun such that it’s easy to jump in with friends and just shoot things.

Shoot all the things! Including Geoff… He’s a spider

Battleborn is split into two distinct halves. Firstly there is Story Mode, a raid-style PvE mode which has very heavy leanings towards Borderlands gameplay. There’s also a typical adversarial Versus Mode that combines PvP and PvE elements much like any MOBA. In either mode, you take control of a warrior (known as a Battleborn) and team up with four other players to tackle the objectives. Each Battleborn has three active skills they can use which are all on a cooldown timer. Some of these are offensive skills (like Whiskey Foxtrot’s Sticky Bomb) whereas others are more defensive/support skills (like Miko’s Fungus Amongus which summons a giant healing mushroom for the team). Each Battleborn also has their own weapon which focuses on wither melee or ranged combat. As you kill enemies you gain levels which earn skill points that are spent on augments which upgrade your abilities. These augments are presented in a double helix, with a choice between two upgrades given per level. These augments become increasingly powerful as you gain levels and will shape the way you play a certain character. Much of Battleborn’s flavour comes from experimenting with the numerous characters (there are 28 unlockable Battleborn) and finding one that suits your playstyle. All the characters have a unique aesthetic and quite diverse abilities, with no two feeling the same. Your effectiveness with your character will be determined by how well you manage your skill set and how you tailor your augments to that skill set. All characters can be levelled up by completing matches, and doing so will unlock new costumes and upgrade choices for your helix.

Accept the healing power of the giant mushroom

The game features bright, cel-shaded visuals and overall are quite impressive. Gameplay is rather frantic chaos, with bullets flying everywhere and flashy skills being used constantly. It’s a measured chaos though and there’s a deeply strategic element to the gameplay, particularly in the multiplayer. Here, you’ll have to find your role on the team and work cooperatively to achieve your goal. In Incursion, you have to guide Minions to the enemy camp and destroy their two sentries, while simultaneously defending your own. In Meltdown, you guide Minions to points on the map where they are then sacrificed in a Minion Grinder to an insane AI for points. Of course the enemy is trying to do the exact same thing, so you have to play both offense and defence if you hope to succeed. Both modes feature a relatively simply three-lane design, so navigating the space is quite a simple matter, and even a newcomer will very quickly acclimatise.

ISIC: Deadly head in a jar

It’s clear that the Multiplayer Mode will be where the game is going to find its legs, and it’s no secret that Ubisoft are keen on throwing their diamond-encrusted hat into the eSports ring. For this ploy to be successful, the game has to be balanced, which is no mean feat considering the expansive roster of Battleborn and all the variability in the different skill set combinations. For the most part, Gearbox have done a fairly good job; with the notable exception of two Battleborn, I never felt I could simply walk into the arena and lay waste to the opposition with an overpowered skill set. The exceptions are worth noting though. Rath is a melee-based character with two very quick swords and it felt a little too easy to simply run in and slice and dice your foes into oblivion, particularly given that one of his abilities (Cataclysmic Smash) launches enemies in the air and renders them utterly defenseless and completely open to attack for a short while. His ultimate ability (these are the most powerful skills with the longest cooldown timer) turns him into a whirling dervish of pain, and using this ability after a Cataclysmic Smash all but dooms the other player (check out some gameplay below). Ambra seems similarly overpowered, as she has numerous abilities which heal you and your team, and a particularly nasty staff that steals enemies’ health as long as you are close to them and have the right trigger pressed (it doesn’t even have to be aimed really). These two Battleborn have a little too much power in their corner and can be extremely hard to kill, especially if the person controlling them knows what they’re doing. Of course there are ways for shutting down both Rath and Ambra if you’re smart about it, but they will stomp an ill-prepared enemy team with ease unless you focus on them.

All things said and done, I think Battleborn could be a serious contender in the MOBA space. Its big roster of unique characters, cool visual style and depth in its various upgrade systems have the potential to make it an enduring experience. Where I believe Battleborn will thrive is in its general accessibility. Where uber-competitive MOBAs like DOTA and LoL have quite toxic communities, Battleborn may just strike a nice balance between being easy to pick up and play with friends, but still being deep enough that it’s tough to master for competitive players. Look out for our review closer to Battleborn’s May 2nd releases date.