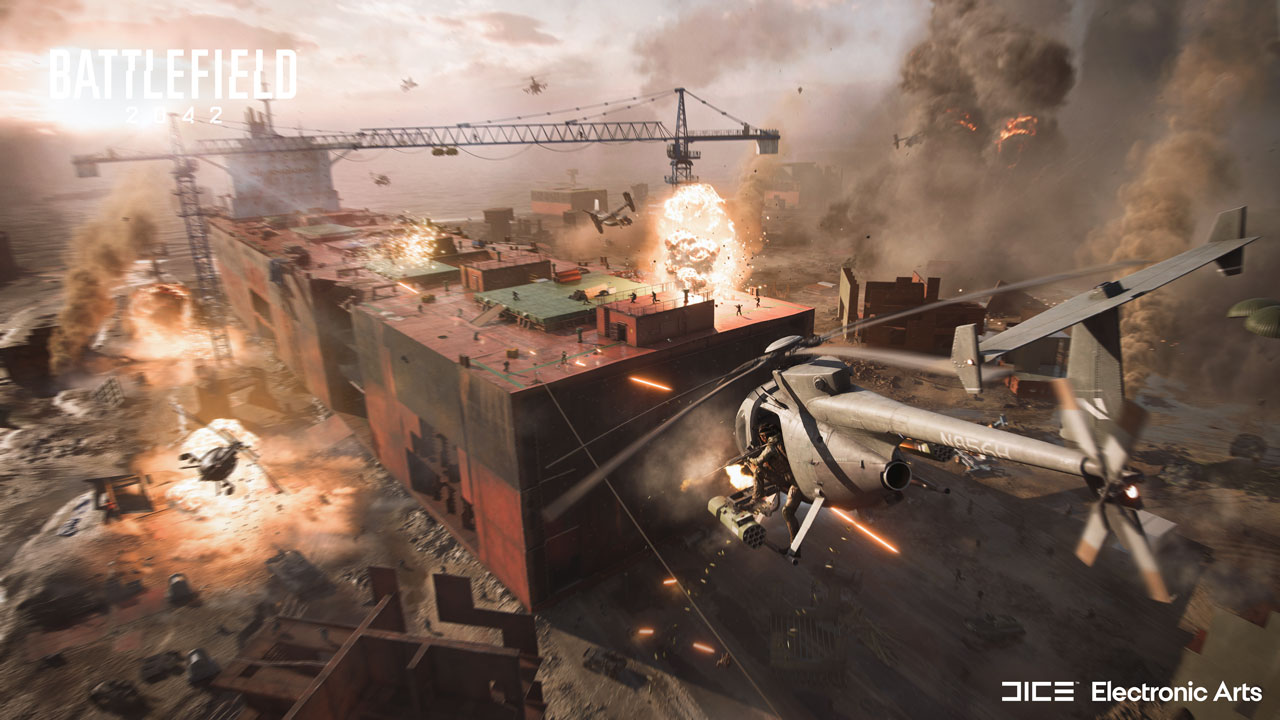 While Battlefield 2042 is pushing the series’ boundaries in a number of ways, some of the foundations remain the same. During our recent media session, DICE deep-dived into All-Out Warfare, one of three ‘multiplayer experiences’ that make up Battlefield 2042.

Described as the ‘essence of Battlefield’ by Design Director Daniel Berlin, All-Out Warfare is the studio’s evolution of two Battlefield fan-favourite modes – Conquest and Breakthrough. There will be seven maps available at launch for the All-Out Warfare experience, and DICE says that these maps are the largest the franchise has seen and will include deadly dynamic weather events such as tornadoes and sand storms. Naturally, with bigger maps comes a bigger player count, and Berlin revealed that All-Out Warfare on PS5, Xbox Series X&S and PC will feature 128 players. Huge. This increase in players meant that the team at DICE had to change their approach to the game’s map design, with Berlin telling media that the studio’s Frostbite Engine received some significant upgrades that allowed the team to ‘push the sandbox gameplay to the max.’ Berlin followed up by saying that the PS4 and Xbox One player count will remain at 64 players and that the maps have been scaled back to accommodate a lower player number.

Before we dive into how All-Out Warfare works, let’s take a look at the maps you’ll be fighting on, with descriptions straight from the horse’s mouth.

Manifest – set in Brani Island, Singapore. Players will see a strategic flashpoint emerge as global trade chokes this location which is vital for the American supply lines.

Orbital – set in Kourou, French Guiana. The battle here is over a rocket launch site as a controversial space launch becomes a race against time.

Renewal – set in the Eastern Desert, Egypt. Players will fight for a groundbreaking agriculture technology centre in the Egyptian Desert.

Breakaway – set in Queen Maud Land, Antarctica. Struggle over oil and gas that pushes soldiers to the brink as an industry clashes with nature and ice gives way.

Given the global nature of Battlefield 2042’s maps, I ask Berlin if the team ever considered having a map set in Australia. “Maybe,” he laughs, keeping his cards close to his chest.

“It’s a global war, we look at a lot of locations, and we’re going to add a lot of stuff in the future, so we’ll see what the future has in store.”

If you’ve played a Battlefield game in the past, you’ll likely have an idea of how the Conquest and Breakthrough modes play. However, Berlin says that the modes have been revamped to accommodate the larger player count in 2042 while maintaining what makes them uniquely Battlefield.

Conquest sees two teams fighting for control over objectives across massive maps, and Berlin says that in Conquest the team is aiming for “varied pacing,” which are moments when a large number of players collide and chaos unfolds, as well as moments that are much smaller scale and “more personal.”

Both Conquest and Breakthrough maps have been designed to maximise the overall experience for players. One of the ways that DICE hopes to achieve this is called ‘clustering’, which as Berlin explains are concentrated areas on the map where objectives and objects are found, such as a village or stadium. Berlin tells me that the idea for clusters came about after the team was challenged early on in production with how to accommodate 128 players without it becoming too chaotic. The other way is through Sectors, which changes how players will gain control over clusters. In order to capture an entire sector, a team must take control of all the objectives within a sector.

With the epic scale of the game’s maps and the number of players involved, Conquest matches will essentially be several small battles amidst one large battle, and DICE is hoping that the refinements to the formula in Battlefield 2042 will create some of the most epic battles players have ever experienced.

“Take Hourglass for example,” says Berlin, “in that map you have these distinct areas where you can almost call them small maps within the big map. You have the stadium on the western side of the map, which is a close-quarters space that has multiple capture points. This is where you go if you want some close-quarters combat. If you want to get a lot of verticality you can go to Neon City which is on the far end on the other side of the map and fight amongst the skyscrapers and zipline between the rooftops.

“But in between the spaces, we have the open space where you traverse and travel, and this is where the new type of features we’ve added to the game like the calling system comes into play. So you can be fighting in the stadium, there’s been an extended fight there and you’ve managed to capture all the objectives within the stadium and with the varied pacing of Conquest you go “Phew, battle over. What’s next? You bring up your map and see that the enemy is starting to attack the archers – you need to get there. You get your calling tablet and call in a vehicle, it parachutes down in front of you, your squad gets in and you travel to the next sector, you get off and start fighting there and the intensity goes up again.”

“It has this lull and up and down, which is what we really wanted to get with Conquest. Whereas Breakthrough is just army here, army here, and very action-filled.”

It’s clear that DICE wants to take the franchise to the next level while keeping what makes Battlefield stand out from other shooters. Based on what we’ve seen and heard at our media event, fans of the Battlefield series should be excited about what’s in store for them in Battlefield 2042’s All-Out Warfare experience. I know I am.