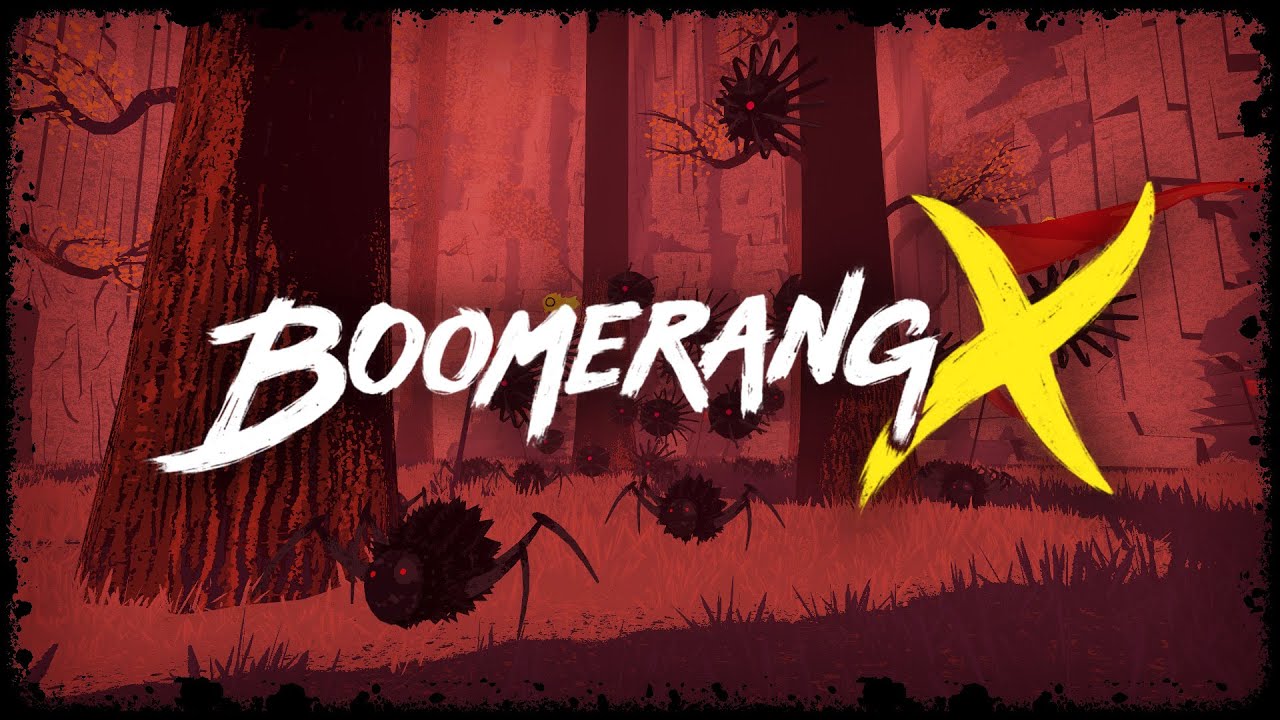 I want to start with a disclaimer with regards to the title and our audience here at Well Played. Despite the title, there are no boomerangs in this game. There is no relation between the titular, X-shaped bladed weapon, and the culturally significant Indigenous Australian hunting tool. What we have here is a very swish, jury-rigged throwing-star reminiscent of Dark Sector’s throwable glaive that will reliably return to sender after a few courses around the room. I will refer to it as a glaive from here on out.

Boomerang X is a wave-based horde shooter in the style of Devil Daggers, with the breakneck momentum of 90s boomer-shooters. It begins with players washing ashore a mysterious island during a storm. Arms bandaged, the player lifts themselves from the sand. Ahead lies what appears to be a jungle and an ancient stone facade. We set forth with no further context and begin a descent into the remnants of a bygone insect civilisation.

Too close for comfort

Moving up the beach, I hit the spacebar and am launched forward. Tapping again, the player begins bunny-hopping, but with none of the skill required in games such as Counter-Strike. Momentum picks up and the beautiful greenery cascades by. We come across the remains of a straw-hut village, and I vaguely catch a glimpse of a human-sized mantis cast in stone. Beyond lies a cave. Within, an object that appears to be a large shuriken crossed with a glaive stands aloft an anvil. The cave appears to have belonged to a smith, with weapons lining the wall and a furnace in the corner. Ahead, a stone screen projects tutorial prompts. We hold the left mouse button, priming the glaive as it begins to whirl around the player’s finger. It emits a satisfying ‘schikt-schikt-schikt’ as it revs up, like rapidly sharpening knives. I let it loose and grin as it shoots forth and bounces off the walls and ceiling, with no apparent risk of self-imposed damage.

There is some further plot teased out here, by way of some curious visual worldbuilding as we come across the statues and abandoned industry of what appears to be a dominant race of giant mantis. We also frequently happen upon a most friendly towering centipede named Tepan, who waves us over with his cute lil’ right arms. The only interactive character during the preview, chatting with Tepan is a lovely narrative anchor and delightful respite between enemy encounters.

Weapon in hand, the game then proceeds to ferry us narrowly from one dangerous enemy-filled arena location to another. With no clear context for your purpose in life other than to survive and explore the island further, waves of enemies will spawn in the arenas and swarm the player. The game starts light, with a generous difficulty curve. Wasps cloaked in a muddy black silhouette are our first prickly customers, and we must dispatch all those with a glowing yellow orb above them. You can leave their orb-less cousins alone if you are fast enough to not become overwhelmed. Waves typically consist of one to eight key enemies that require dispatching, with their many friends nearby to buff out the ranks and keep you moving.

Strafe jumping about at great speed, a swiftly charged glaive rakes through a strategically arranged row of wasps and spiders as they dissipate before me. Like many Devolver Digital-published games, there is a wonderfully chunky kinetic energy to the weapon we will now wield for the duration of the game.

Waves typically last around seven rounds. New enemy types may appear in later rounds that either take a quick throw to dispatch or may have some bright red orbs to target that function as their weak points. One hit to each point will knock it clear; no bullet spongy nonsense here. Stay on your toes, or better, stay off the floor as an enemies’ touch will mean a quick reset back to round one.

Once players comfortably have the fast-paced movement down, the game tosses us a ‘slingshot’ ability and a quick 15-second in-world tutorial to get us on our way. Now we can teleport towards our mid-flight glaive, meaning even less time spent obeying gravity. Soon thereafter, a time-slowdown skill. Utilising a very basic set of controls, the game is now pushing players out of the nest and into the sky. You will be coming across stages where the floor is lava, with staggering amounts of enemies hurtling towards you, and yet you’re soaring around the stage, slowing down time like Neo and dispatching the red orbs hidden on the backs of gigantic poisonous frogs and towering automaton giraffes.

This game bleeds imagination and is always rewarding the player for every stage cleared. When new abilities are to be unlocked every few stages, you come to a stunning auditorium and must strum the towering strings that line the wall to play a melody and be blessed with some new powerup that is going to completely alter your strategy. I have all the time in the world for this piecemeal approach to introducing the character to new challenges organically by way of one mechanic at a time, paced out thoughtfully.

What we are seeing of Boomerang X at this stage is so endearingly rad. Enemy variety is ludicrous, increasing the challenge and puzzle-like nature of the arenas, with their highlighted weak points often being obscured in such a way that requires some manoeuvring to place that killing blow. This world is sublime in its detail, even if it does seem a little like set dressing between arenas at this point. Talking to Tepan opens some exposition that we may see expanded in the final release. This is the kind of game that subtly works its way into your muscle memory with an ease I have never experienced. It’s the kind of game I want to show friends after a few drinks, so they can bask in my godlike defiance of gravity as I sweep through hordes while making that shit look easy.

I feel so alive!

Developer DANG! Has given me a near non-stop adrenaline rush that doesn’t feel like a contextless free-for-fall slaughter-fest. My heart was in my mouth and frequently I had to remember to breathe again. Eyes bulging, jaw slacked, and body tensed on the edge of pleasure. Only two times have I curled my toes in so tight, so unconsciously that I pulled a muscle in my foot – during sex and during this game. Is this game as good as sex? Hell no, but it’ll get your heart racing and those dopamine receptors firing off just as effectively. Now, if that’s not a sales pitch…

Boomerang X is currently slated for release in Winter 2021 on Steam and Nintendo Switch.