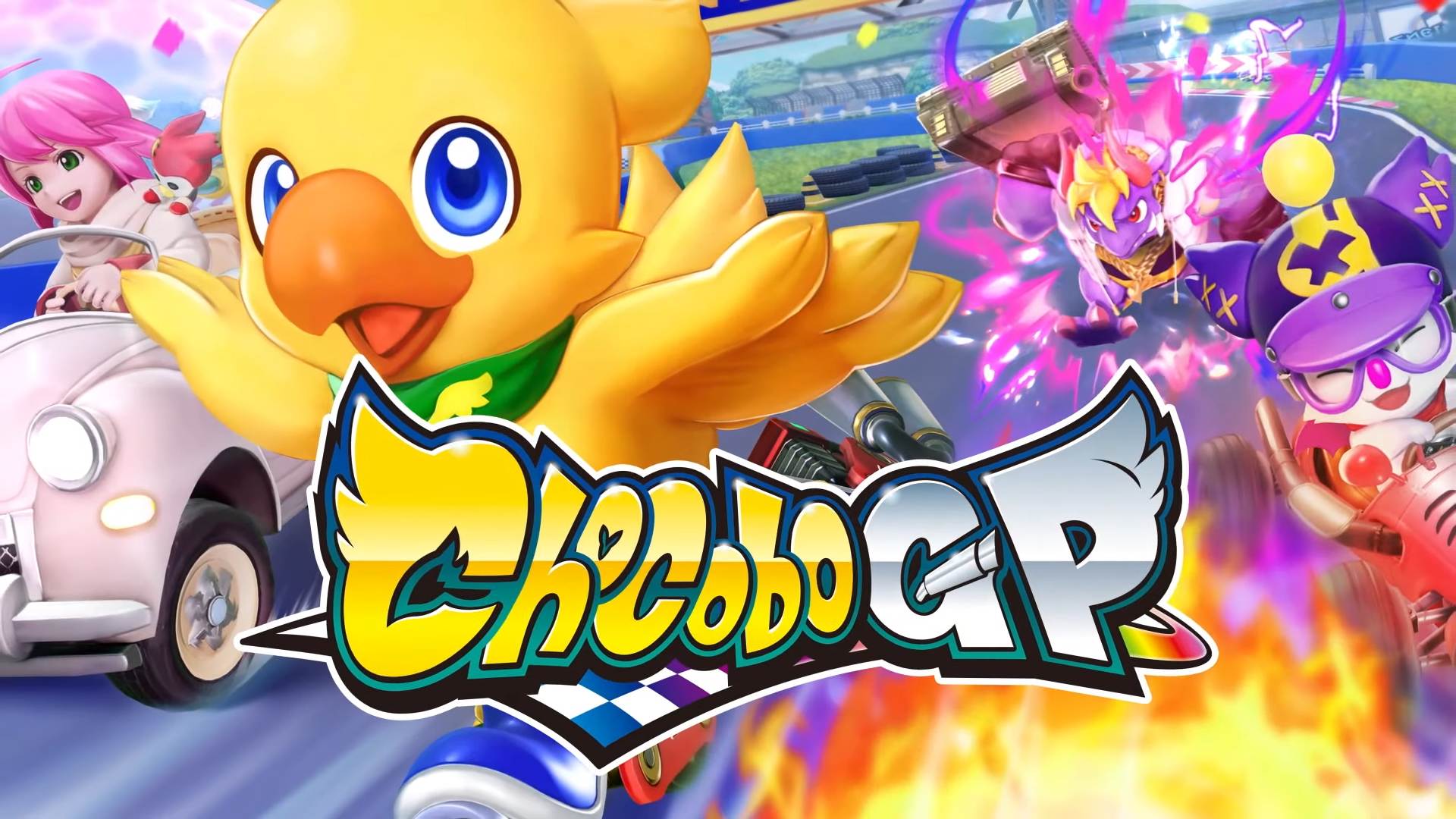 The humble kart racer wears many hats in the video game market. It’s a racing game for people who don’t like racing. A pick-up-and-play couch multiplayer that suits any skill level. It’s an easy stocking filler. It’s also, and has been for decades now, a vehicle (heh) for IP owners looking to make an easy buck on a character-driven game with an established template. Often these titles end up feeling soulless and underdeveloped, but every now and then we get one that actually strives to offer a compelling product beyond its obvious appeal. Chocobo GP, the spiritual successor to 1999’s Chocobo Racing, seems like it’s trying to offer something decent for both Final Fantasy and Mario Kart fans but ultimately fails to do either.

Bringing together faces from Final Fantasy deep cuts like Chocobo’s Dungeon and Final Fantasy Fables: Chocobo Tales as well Final Fantasy VI and IX, Chocobo GP’s single-player story mode weaves an altogether nonsensical tale over a roughly two-hour total playtime. In it, a moogle seemingly becomes possessed by a mysterious spirit hellbent on setting up competitive races, convincing a growing roster to get behind the wheel with the promise of ultimate spoils for the winner. At least that’s as far as I remember of what can basically be boiled down to a series of offbeat conversations between adorable, chibi versions of semi-recognisable characters throwing around some very specific references to the franchise’s 32-bit era.

To the game’s credit, I did let out a few nostalgic squeals when some of my favourites like Vivi and Steiner started bantering, or the fact that Terra and Maduin show up early on as a formidable daddy-daughter racing duo. The writing is often quite self-aware and probably the highlight of the entire package, if that’s enough to make you want to part with the cost of a whole game.

Of course a nonsensical story packed with some genuinely funny in-jokes that few people under 35 will get is totally fine when the racing is good. Sorry, if the racing is good. When you enter your very first race in Chocobo GP one thing becomes plainly obvious – this is a game that’s been taking a lot of notes from modern Mario Kart games, Mario Kart 8 Deluxe in particular. If you know your way around your starting boosts, multi-stage drift boosts and jump tricks you’ll instantly feel at home here. It’s not necessarily a bad idea to crib from the best, but a lot rests on nailing whatever you’re borrowing and the fact is that racing in Chocobo GP doesn’t feel anywhere near as fun or technically satisfying as the games that it aspires to.

Everything about racing in this game is just a bit off. It all feels half-baked, as though development reached the point where it was time to start fine-tuning everything and then Square Enix decided to just release it. The handling physics don’t gel with the track layouts, which themselves are chock-full of obnoxious geometry that can get you stuck and bring you to a standstill out of nowhere. The power-ups, which are themed on Magicite spells but again mostly crib from elsewhere, run the spectrum between basically useless and borderline broken.

Couple this with the fact that the game contains just eight environments to race on, with a few variant layouts adding up to a total of 21 “tracks” all up. It’s almost a mercy that most of these are criminally short though, or the constant frustration of trying to race well and have the game thwart your every effort would compound even heavier. It sounds like harsh criticism, and to Chocobo GP’s credit the tracks all look fairly nice and bring the action to some fun and iconic Final Fantasy scenery, but even with a couple of slight layout variations in each of them eight locations is not enough to keep people invested.

Outside of the story, solo players will have access to a stock standard roster of modes that includes time attack and custom races as well as Series Races – the equivalent of Mario Kart’s Grand Prix offering. Where that game features a collection of four-race GPs across unique tracks though, Chocobo GP spreads its paltry track selection across no less than 12 series. The only thing that helped me slog through them all to the end was knowing I’d have some shiny new reward waiting for me at the end. Maybe another secret character like the admittedly excellent one granted for finishing the story mode twice. Except, of course, there was nothing.

Most of the game’s unlockables come in the form of characters, karts and colour variations bought with tickets earned by racing in any of the modes. The characters and their karts aside, everything else consists of disappointing, barely-different reskins and palette swaps that simply aren’t worth the effort. Especially when all the good stuff seems to be coming in bi-monthly “seasons”. Yep. Probably the biggest disappointment about all of this, and the game’s shortcomings in general, is that Square Enix has still seen fit to monetise it with a live service-esque season pass model. Never mind the lack of unique tracks and bland unlockables when you can pay extra, real money on top of the kart racer you bought to add the kinds of content you might actually want. Sure, other racers have DLC offerings too, but they at least feel complete in their base forms.

One saving grace for Chocobo GP might have been its multiplayer offerings, but even these I estimate will fall flat when it launches. The game’s bracket-style tournament mode is a good idea, but I sincerely doubt that lobbies will fill to the degree needed to make it viable. Up to eight players can play in local multiplayer, two per system, but again I just can’t see enough people owning the game and getting together to make that work. Having four players on one machine feels like something of a standard so it’s disappointing that can’t be done here.

Chocobo GP is in the uniquely disappointing position of having very little to offer either kart racing fans or those out for a new Final Fantasy experience. Uninspired and technically messy racing on tepid track layouts coupled with jarringly dated fanservice and live service creep make this hard to recommend to anyone, even for the low price of free in its Lite version. There are clear attempts to inject recognisable series mechanics into the Mario Kart-esque gameplay but it ultimately tries to capture Nintendo’s kart racing magic too closely on its home system and falls completely short. The Switch already has Mario Kart 8 Deluxe and a bunch of great Final Fantasy games – just play those. 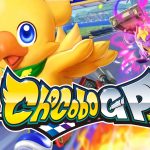 Chocobo GP Review
A Bit Kweh
Chocobo GP copies the work of better kart racers while fundamentally missing the mark on what makes them great. It delivers entertaining Final Fantasy fanservice that's at least two decades too late for the one audience that might still find the fun it and tacks on microtransactions to boot. It's functional and sometimes fun but otherwise not worth your time.
The Good
Functional kart racing should please some
The few iconic track locations are lovely
The final unlockable racer is fantastic
Fairly decent, self-aware fanservice…
The Bad
…if you were born in the 80s
Tracks are dull and unpolished
Power-ups either don't work or are OP
Thin on content for solo players
Live service elements cheapen the experience
The main menu music is an actual crime
5.5
Glass Half Full

Chocobo GP Review
A Bit Kweh
Chocobo GP copies the work of better kart racers while fundamentally missing the mark on what makes them great. It delivers entertaining Final Fantasy fanservice that's at least two decades too late for the one audience that might still find the fun it and tacks on microtransactions to boot. It's functional and sometimes fun but otherwise not worth your time.
The Good
Functional kart racing should please some
The few iconic track locations are lovely
The final unlockable racer is fantastic
Fairly decent, self-aware fanservice…
The Bad
…if you were born in the 80s
Tracks are dull and unpolished
Power-ups either don't work or are OP
Thin on content for solo players
Live service elements cheapen the experience
The main menu music is an actual crime
5.5
Glass Half Full
In this article:Chocobo GP, final fantasy, kieron verbrugge, nintendo, review, Square Enix, switch