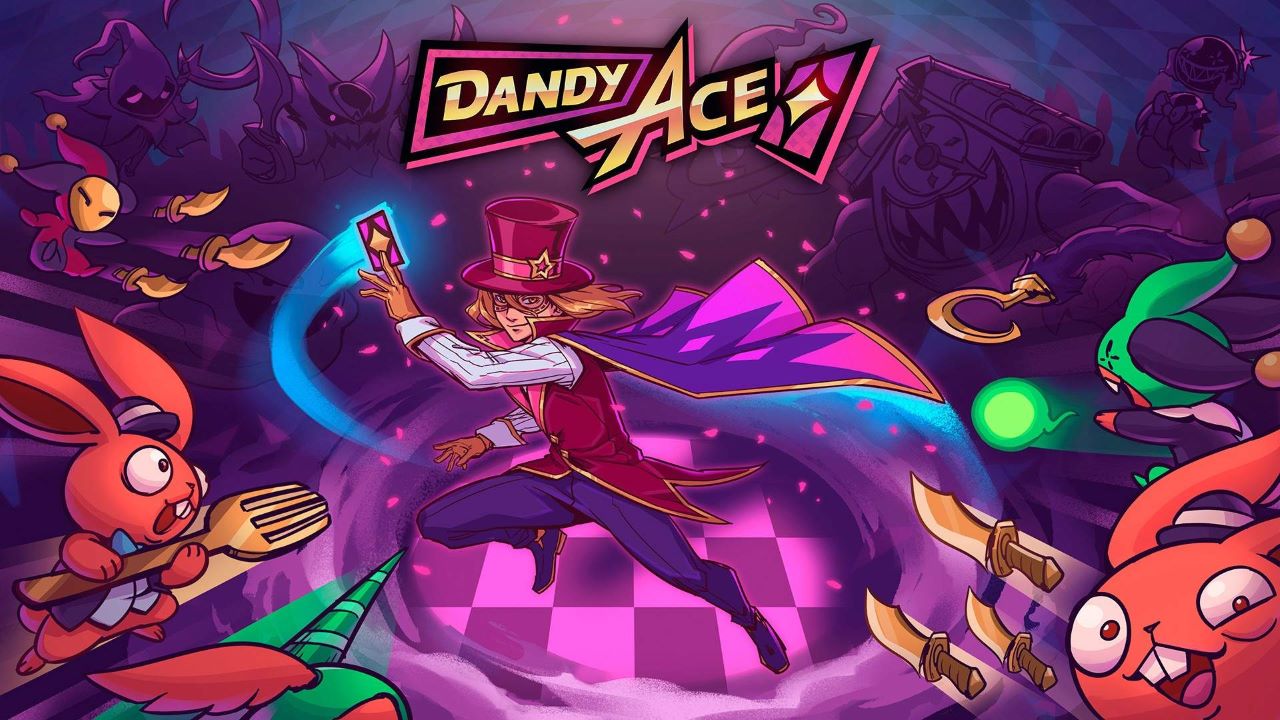 When you think of some of the biggest games in recent years, indie or otherwise, there’s a high likelihood they’ve fallen into the roguelike category. This role playing sub-genre has become increasingly more popular of late, thanks largely to Supergiant Games’ excellent Hades and Motion Twin’s equally entertaining Dead Cells, but the adverse effect to that success is a tougher market to crack and find a unique perspective within. Luckily for Dandy Ace, from Brazilian-based Mad Mimic, there’s enough colour and combat flavour to do just that.

Having been trapped within a mirror dimension by rival illusionist Lele, Dandy Ace must traverse the constantly changing world within to recover his collection of magic cards and trinkets in order to defeat his green-eyed rival and escape. Unfortunately for Mr Ace, each area contains an assortment of wild creatures and even wilder bosses created by Lele to take him down, and there’s a very high chance they’ll succeed. Probably more than once.

The more you play the better cards you can find

From a distance, it’s easy to see the influences in Dandy’s DNA. Survive for as long as you can and unlock various abilities to aid your quest before dying at the hands of a random stray fireball and starting over with nothing. Dandy’s prison is an assortment of themed rooms chock full of enemies and hidden loot, with branching paths that can be unlocked over time. Some paths can only be opened once you find the right key, otherwise it’s all about pushing forward, meeting whatever boss that may lay in your path, before reaching Lele at the end.

Between each area, you can spend whatever gold or shards you find to unlock new and more powerful cards to add to your collection, along with various trinkets that provide temporary buffs per run or upgrades to existing bonuses, such as the number of times you can drink tea to recover health. In a similar fashion to Dead Cells, you’ll be able to permanently deposit shards towards these upgrades even if you do succumb later, a welcome respite from the early grind, though the kinds of cards you’ll be able to unlock randomly appear as drops and can be lost if you die before reaching the safe room.

The magic cards themselves are divided into three key types – movement, damage and utility. Damage cards are obviously all about inflicting as much pain on the enemy as possible, whether it be throwing knives, furiously punching or firing shooting stars. Movement cards, meanwhile, improve your chance to dodge or teleport out of the way, causing harm in the process to anyone that’s too close to you. Finally, utility cards have a much wider assortment of options, from creating barriers to avoid harm to leaving cards of fire as traps on the ground for any unsuspecting enemies.

The trick (pun intended) to Dandy’s collection of cards is combining certain types together to even greater effect. You have complete control over which card goes to any of the four face buttons, a neat touch, but once you’ve settled on your loadout you can buff every main card with another. Simply choose a card and add it underneath another to create devastating combos, leaving behind poison mist with every teleport or my personal favourite, slowing characters to a crawl and dealing massive harm with a tempestuous black hole. Every run leads to more potential unlocks and combinations, and further experimenting with what you find before settling on what you’re comfortable with.

Your starting hand will always vary

Grinding is the true aim of the game. Though you’ll be able to make some decent progress even with the simple starting cards, there’s a ton of far better options to be discovered and upgraded. Once you get past your first boss fight (either a giant Axolotl who seeks approval of his artwork or a deadly scissor-wielding plant lady), you’ll come across Ninf, a mafia-inspired bunny who can offer unique new abilities and the chance to further improve your current cards from his vending machines.

For all the good the colour and combat does for Dandy Ace, it’s a shame the story doesn’t have the same level of impact. Most of Lele’s tale of revenge will be played out through dialogue sequences, with Dandy showing little regard for the situation he’s found himself in and seemingly oblivious to Lele’s distaste in his magic. Outside of that, the story plays out rather simply, without any sudden plot twists. It’s a shame really, given how vibrant the world seems, that more wasn’t afforded to the story, though perhaps the bar has been raised so high by Hades that it’s a tough act to follow on that front. Lele will constantly quip during each run and there’s some decent voice acting on offer, but once you’ve heard one joke or pop culture reference (of which there are a few), you’ll quickly want to turn him off and get on with the action, something the developers have thankfully included within the sound options.

It also should be said, for a game that relies so heavily on the idea of magic, the musical score seems a little out of place. It’s not bad, in fact some of the beats are really catchy and enjoyable to listen to, but it doesn’t always fit the purple-hazed aesthetic. It’s a minor gripe in the grand scheme of things, something that doesn’t affect the overall experience, but it’s something I couldn’t help but think the more I spent with it.

All told, Dandy Ace has plenty to offer fans of the roguelike genre. It might not quite hold up to the quality of some of its predecessors, but there’s enough variety within the combat and a decent challenge even at normal difficulty to satisfy those looking for something new or just ever so different to what’s come before. If you’re willing to stick with it and invest a few hours, you’ll uncover some nifty little tricks that make the grind more appealing, along with the chance to unlock harder difficulty settings with a successful run or two. Dandy Ace is a solid magical spectacle and, as a member of the Xbox Game Pass family at launch, it’s a no-brainer to at least give it a spin. 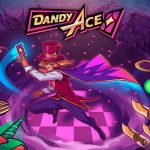 Dandy Ace Review
An Ace Up His Sleeve
Dandy Ace is solid roguelike that should appeal to fans of the genre. It’s a shame the story can’t be as magical as its setting and appearance, but at the very least the combat is engaging and the option to play your way is a welcome addition. If you’re willing to invest some time, there’s much to discover within.
The Good
Solid roguelike action
Clever variety of abilities and customisation
A challenge even for veterans of the genre
Vibrant colours and rock solid framerate
Long term investment is rewarded
The Bad
Story doesn’t offer much compared to the action
Voice acting can grate after a while
Early grind will be rough for the inexperienced

Dandy Ace Review
An Ace Up His Sleeve
Dandy Ace is solid roguelike that should appeal to fans of the genre. It’s a shame the story can’t be as magical as its setting and appearance, but at the very least the combat is engaging and the option to play your way is a welcome addition. If you’re willing to invest some time, there’s much to discover within.
The Good
Solid roguelike action
Clever variety of abilities and customisation
A challenge even for veterans of the genre
Vibrant colours and rock solid framerate
Long term investment is rewarded
The Bad
Story doesn’t offer much compared to the action
Voice acting can grate after a while
Early grind will be rough for the inexperienced
In this article:card game, dandy ace, mad mimic, mark issacson, neowiz